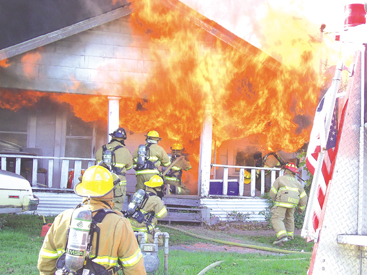 Daily Sun photos/Bob Belcher Above, flames leap out of a home at 700 Commerce Sunday as firefighters attack the blaze. Less than an hour later, many of the same firefighters were at 2917 Purdue, below, as fire extensively damaged a brick home. No injuries were reported. Both fires are under investigation. 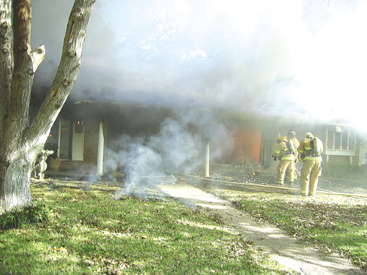 Daily Sun photos/Bob Belcher Above, flames leap out of a home at 700 Commerce Sunday as firefighters attack the blaze. Less than an hour later, many of the same firefighters were at 2917 Purdue, below, as fire extensively damaged a brick home. No injuries were reported. Both fires are under investigation.

It was a busy day for Corsicana firefighters Sunday. Within the space of an hour Sunday afternoon, fire caused extensive damage to two houses in the city in separate incidents just a few miles apart. Shortly before 1 p.m., firefighters were dispatched to 700 North Commerce. A one-story wood frame duplex was on fire with smoke visible for several blocks. Quick work by firefighters kept the blaze from threatening adjacent structures, but the home was extensively damaged. No one was in the home at the time of the fire, according to firefighters at the scene. While they remained mopping up hot spots of that blaze, another alarm came in at 1:45 p.m., calling fire crews to another structure fire, this time at 2917 Purdue on the city’s north side. A brick home was involved in the second call. A person in the home had escaped the building and called the fire department from a neighbor’s home. Homeowner Rick Reed arrived at the scene moments later to find firefighters pouring water through what had been a large window in the front of the home. “We were at church ... someone called us and told us about the fire,” Reed said as he watched firefighters continue to knock out hot spots in the fire. “My mother-in-law was in the house, but she got out safely and called for help,” he added. Reed said a space heater may have been the cause of the fire. Both fires are being investigated by Fire Marshall James Palos. Palos was at the home on Commerce when the call came in for the second fire on Purdue. Fire Chief Donald McMullan said the two calls so close together isn’t necessarily unusual. “We sometimes will go for hours without a call, then all of a sudden we get several calls within a short time,” McMullan explained. “Saturday night, we went for a long time with no ambulance calls, then within 20 minutes, all of our ambulances were involved in calls, and we had to call in mutual aid for two other calls,” he said. There were no injuries in either of the fires Sunday. Red Cross workers came to both fire scenes to provide drinks and refreshments to firefighters, and assist the victims of the blazes. ————— Bob Belcher may be contacted via e-mail at belcher@corsicanadailysun.com