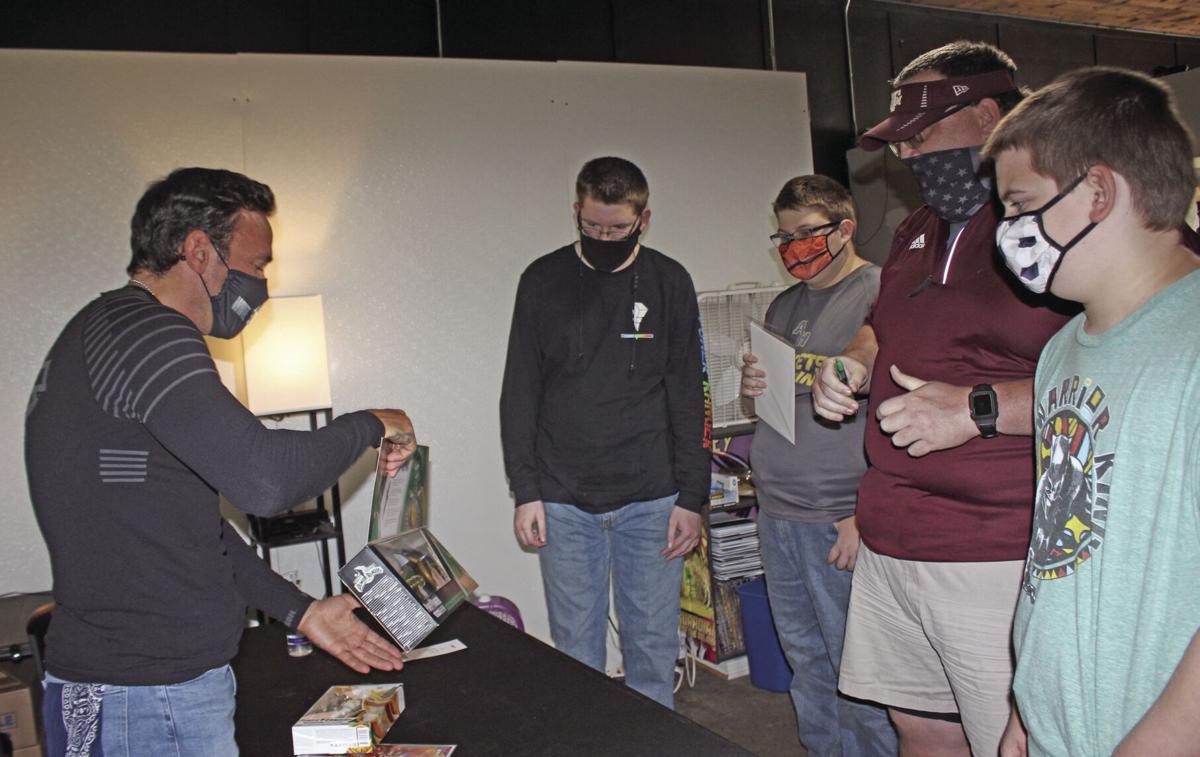 First in line with the number one ticket was Power Ranger fan Aaron Moore, who brought his three sons and a boxed Green Ranger Dragon Dagger to have autographed. 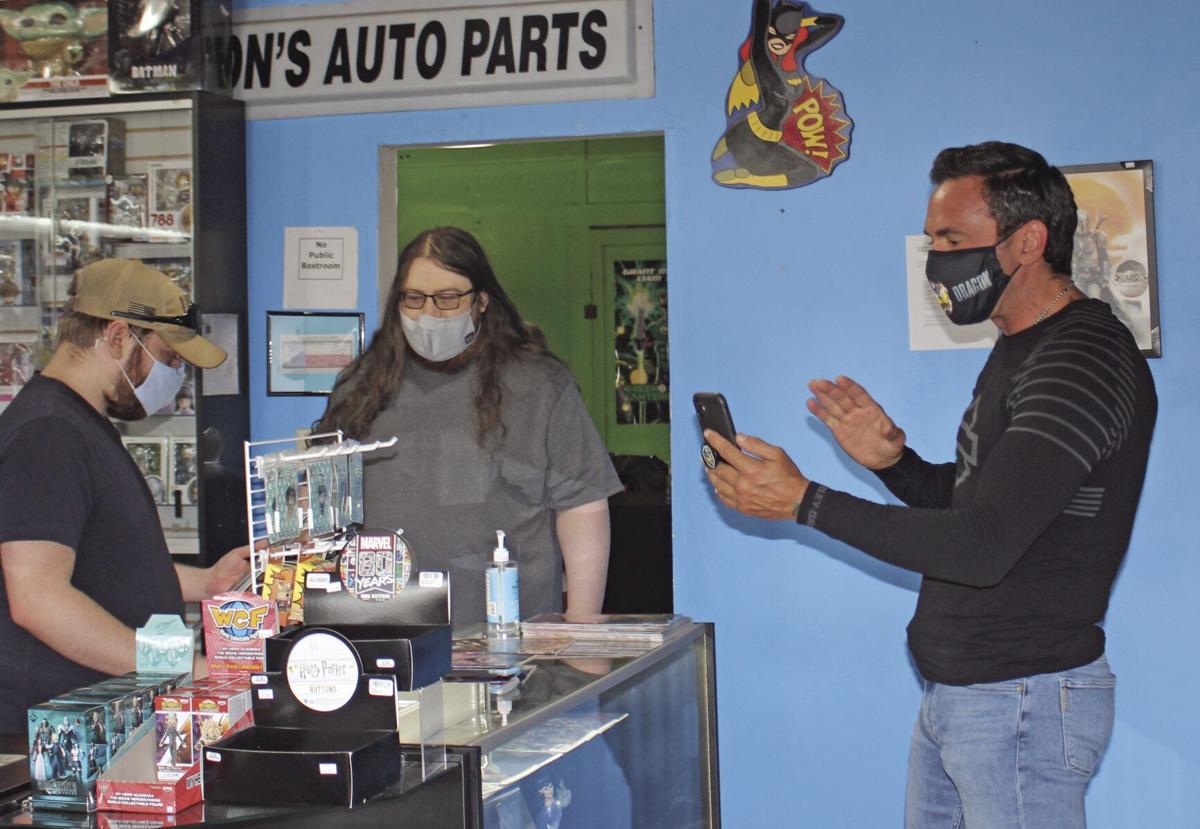 First in line with the number one ticket was Power Ranger fan Aaron Moore, who brought his three sons and a boxed Green Ranger Dragon Dagger to have autographed.

More than 100 fans were able to enjoy a personal meet and greet with the iconic Power Ranger, who posed for photos and signed exclusive merchandise, comic books, and memorabilia.

First in line was Power Ranger fan Aaron Moore, who brought his three sons and a boxed Green Ranger Dragon Dagger to have autographed.

“I started watching the Power Rangers my freshman year of college,” he said. “My oldest son, who is now 16, has been a Power Rangers fans since he was 3. The other two picked it up off of him.”

Frank's visit was part of his Power Ranger Protection Program, an initiative he created to help comic book shops affected by the pandemic.

Through PPP, he travels to locally owned shops to meet fans, sign autographs, and share part of the proceeds with the small businesses he visits.

“This is huge for our shop,” he said. “This whole week has been way busier than normal. It’s getting us a lot of attention. One of our biggest challenges is letting people in this town and surrounding towns know we are here. We are lucky we have a lot of customers who, once they find us, they enjoy their experience and spread the word.”

Davidson said he’s seen growth every year and was starting to gauge how viable his business could be long-term.

“We’ve had a big skew in sales data because of being closed due to COVID-19,” he said. “That’s what the Power Ranger Protection Program is about, helping bring business to comic book stores.”

Davidson said if customers can’t make it to the store, they can see all products online and even subscribe to their favorite titles.

Frank's love of comics started at an early age, a hobby he said “got him out of his head” as a kid.

At 17, he sold his extensive collection to benefit his first karate school, taking the first step to becoming a young entrepreneur.

He was introduced to the comic con circuit by a friend, and as a hobby, has attended hundreds of comic cons, unpaid, to meet fans and sign merchandise and memorabilia.

With many events on hold during the pandemic, Frank continued to explore other ways of connecting with people.

Through JDF Live, featuring cameos from his celebrity friends, Frank used live videos to have meaningful conversations with his audience. However, he said he was still missing the personal connection.

“They can hear my heart, but they can't feel my heart,” he said. “People need human interaction.”

With this in mind, he asked himself: How can a Power Ranger save the world?

“There's always a way to connect with people,” he said.

Frank said he thought of all the people who stood in line for hours just to see him at comic cons.

“That's who I deal with and I love it,” he said of the fans who attend these events.

The event at Oiltown Comics utilized a number system through the Telegram app to maintain social distance procedures and notified guests when it was their turn to meet Frank.

The idea for the Power Ranger Protection Program came to him as a way to give back to the places and people who make so many connections possible.

Frank randomly stops his Harley-Davidson at small comic book shops, donating thousands of dollars worth of merchandise for shops to sell as many struggle to navigate the economic effects of the pandemic.

“I just wanted to leave merchandise and share the proceeds,” he said.

Frank sometimes returns to the shops he visits to host signing events like the one at Oiltown Comics. So far, he's traveled 7,000 miles on his motorcycle, visiting 29 shops in the past two months.

“Corsicana is such a great town, with lots of great people,” he said.

When asked about some of the stranger items he's been asked to autograph, Frank laughed, and said it's not uncommon to be asked to sign cars and babies.

Events like this have drawn hundreds of people, and with social distancing measures and masks on, he can safely meet with 10 to 15 at a time.

Frank says fans can now see and feel his heart, experiencing first hand his passion to connect with others and share positive experiences.

“I may be a little selfish because, mentally, it helps me get through these times,” he said of the PPP.

Frank puts strong emphasis on mental health, using his fame as a platform to address depression and empower people to deal with it.

His YouTube series, JDF Spoken Truth, delivers powerful messages through poetry, and his new short film “In My Head” is currently making the rounds.

He said he wants to let people know it's OK to feel depressed and help them begin to fix the problem.

As “accountability partners,” Frank and his fans help each other navigate life's ups and downs. He said people often share with him their struggles and success with mental health, something he said he finds very rewarding.

“Everyone I've seen always has one less problem when they leave,” he said.

“I want people to say 'I can. I will.' I think you can still conquer the world and be creative during this time.”

According to his IMDB page, his character has appeared in more than 225 episodes — more than any other Ranger.

Frank created his own martial arts system, called Toso Kune Do, and owns Rising Sun Karate with schools in Texas and California.

Currently, Frank is working on “Legend of the White Dragon,” a project fans can follow on his YouTube channel, JDFFFN.

Michael Kormos contributed to this report.