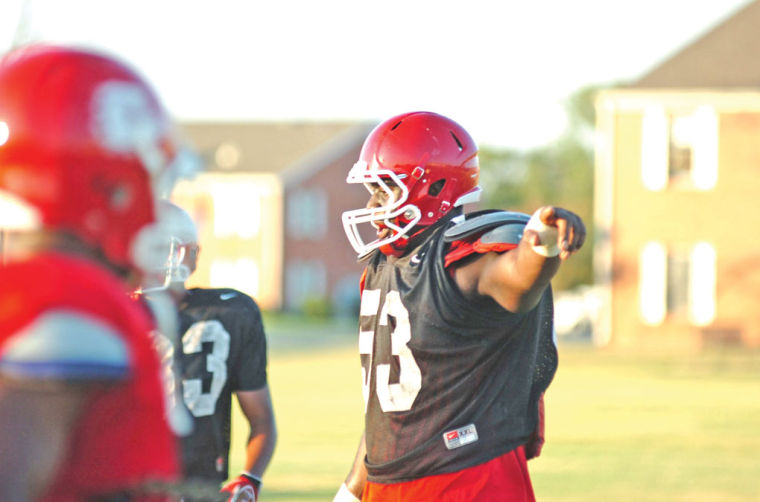 Daily Sun photo/Ron Farmer Teammates dread Calvin Barnett in one-on-one drills and opponents fear how he plays with the strength and power of a defensive tackle with an end’s quickness. 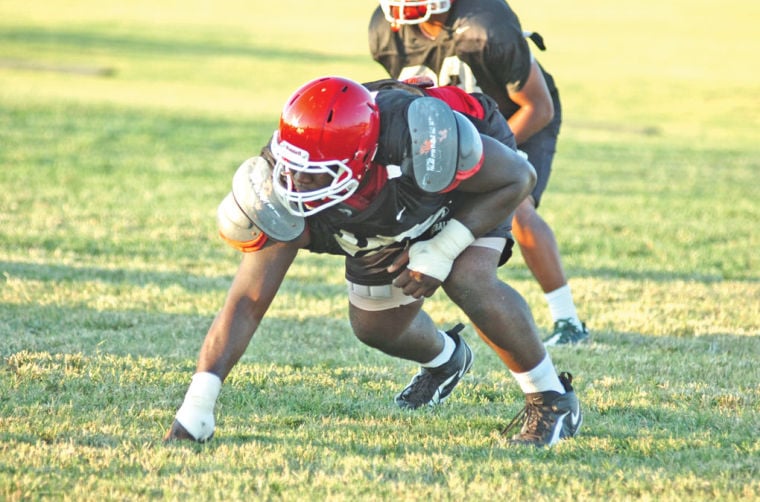 Daily Sun photo/Ron Farmer Calvin Barnett is the keystone of a veteran defensive line that will face Butler in a rematch on Thursday at Tiger Stadium at 7 p.m. in Navarro’s season opener.

Daily Sun photo/Ron Farmer Teammates dread Calvin Barnett in one-on-one drills and opponents fear how he plays with the strength and power of a defensive tackle with an end’s quickness.

Daily Sun photo/Ron Farmer Calvin Barnett is the keystone of a veteran defensive line that will face Butler in a rematch on Thursday at Tiger Stadium at 7 p.m. in Navarro’s season opener.

Calvin Barnett is a well spoken young man who picks his words judiciously but always with a hint of authority and strength that mirrors the way he plays on the football field.

That’s where teammates dread facing him in one-on-one drills and opponents fear how he plays with the strength and power of a defensive tackle with an end’s quickness.

Barnett showed just how dominant he could be in the NJCAA Championship against Butler last December. While defensive end Toby Jackson earned the plaudits, Barnett was the unsung hero as he constantly chased quarterback Zach Mettenberger out of the pocket and stuffed Butler’s inside ground game.

Barnett is the keystone of a veteran defensive line that will face Butler in a rematch on Thursday at Tiger Stadium at 7 p.m. in Navarro’s season opener.

Barnett has become a man of details and a vocal leader on a defensive line that also features returning starters Joey Searcy and Bubba Vactor at defensive tackle and talented newcomers Chris Martin and Tevin Mims at defensive end.

“Sometimes, what a coach says is not enough,” said Barnett, Oklahoma’s No. 1 prospect in 2009 said. “That’s when you need a peer or someone your own age to make the point in a strong way. That’s what I do for this team. I’m not afraid to say what I think.

“But at the end of the day, we’re not happy and practice won’t end until (Head Coach Nick) Bobeck is happy.”

Barnett understands and respects Bobeck and his coaching staff after a tumultuous start to his college career. An Arkansas signee in February 2010, Barnett took the junior college route due to test scores.

He actually had enrolled at Northeastern Oklahoma in the summer of that year despite having signed a letter of intent with Navarro. He eventually made it to Corsicana after Navarro had lost to Butler in the first game last season.

“Last year, (Coach Calvin) Thibodeaux was tough for weeks,” he said. “I tried for weeks to try to impress my coach, but I spent a lot of that time playing timid, trying not to mess up. That’s a lesson I try to pass on to the freshmen. I tell them to play hard and trust in the knowledge of your call and technique. Above all, I tell them to trust their coaches.

“Last summer, Coach Bobeck and (Defensive Coordinator Russ) Pickett told me over and over that if I came here that I would have a chance to play for a national championship. We got that chance and we capitalized on the opportunity. I believe in those guys.”

With the team success came a renewed interest on the recruiting front. Barnett insists he has not made a commitment for 2012 and that he’s focused on Butler first and a future home second.

“The second time through the recruiting process, I know the routine,” said Barnett, who has Arkansas, Baylor and Auburn among his suitors. “The letters come and I don’t even read them if they look like form letters. The handwritten notes I’ll read. It means a lot more to me if it’s handwritten or the coach picks up the phone and calls.

“Recruiting gets tiresome at times, especially when those (colleges) come back after they know I’m not interested from the first time around. My hats off to them for trying, but I am a young man and there’s no sense wasting my time or me wasting their time. I don’t like wasting time . . . ever.”

Spoken like a man who knows what he wants.

Mary Sharp born September 10, 1955 in Dallas, Texas passed away January 19, 2021 at Navarro Regional Hospital at the age of 65. Visitation will be Wednesday, January 27th from 12 p.m. - 1 p.m. at Griffin-Roughton Funeral Home. A private family graveside will be held at Dresden Cemetery. If a…