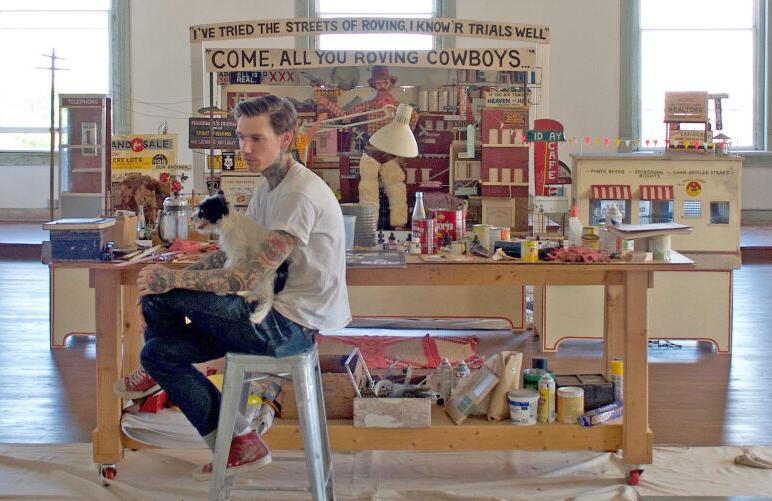 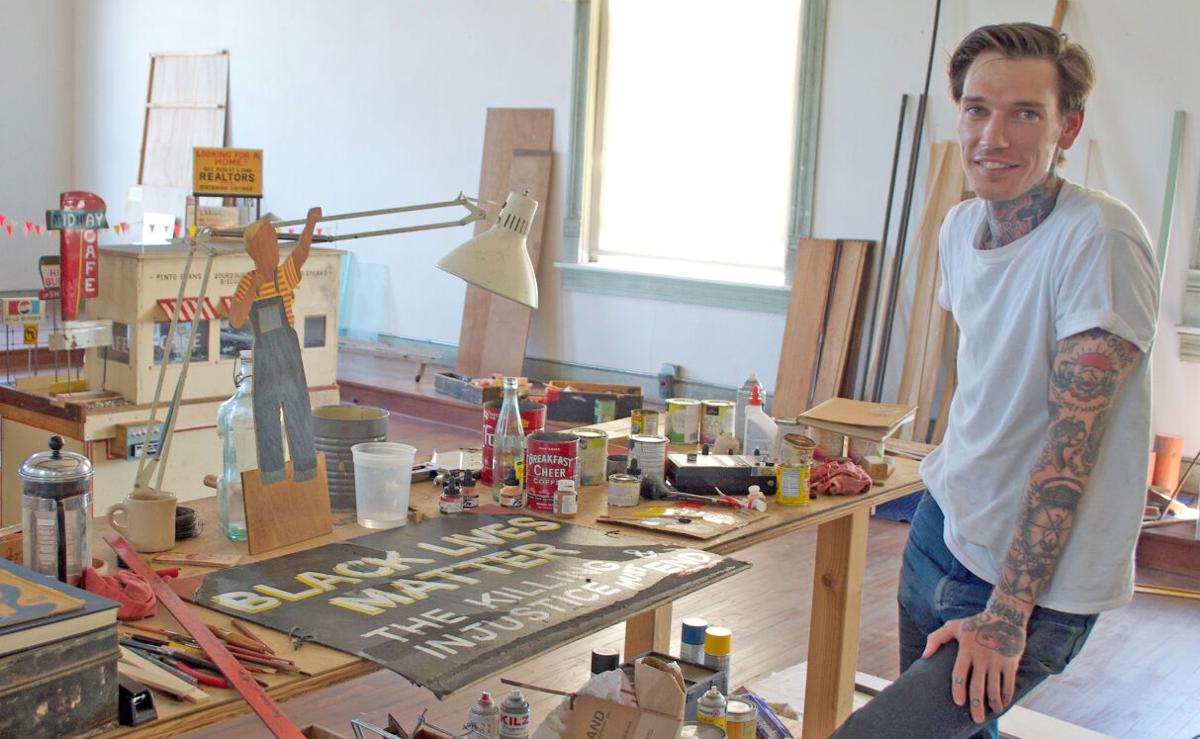 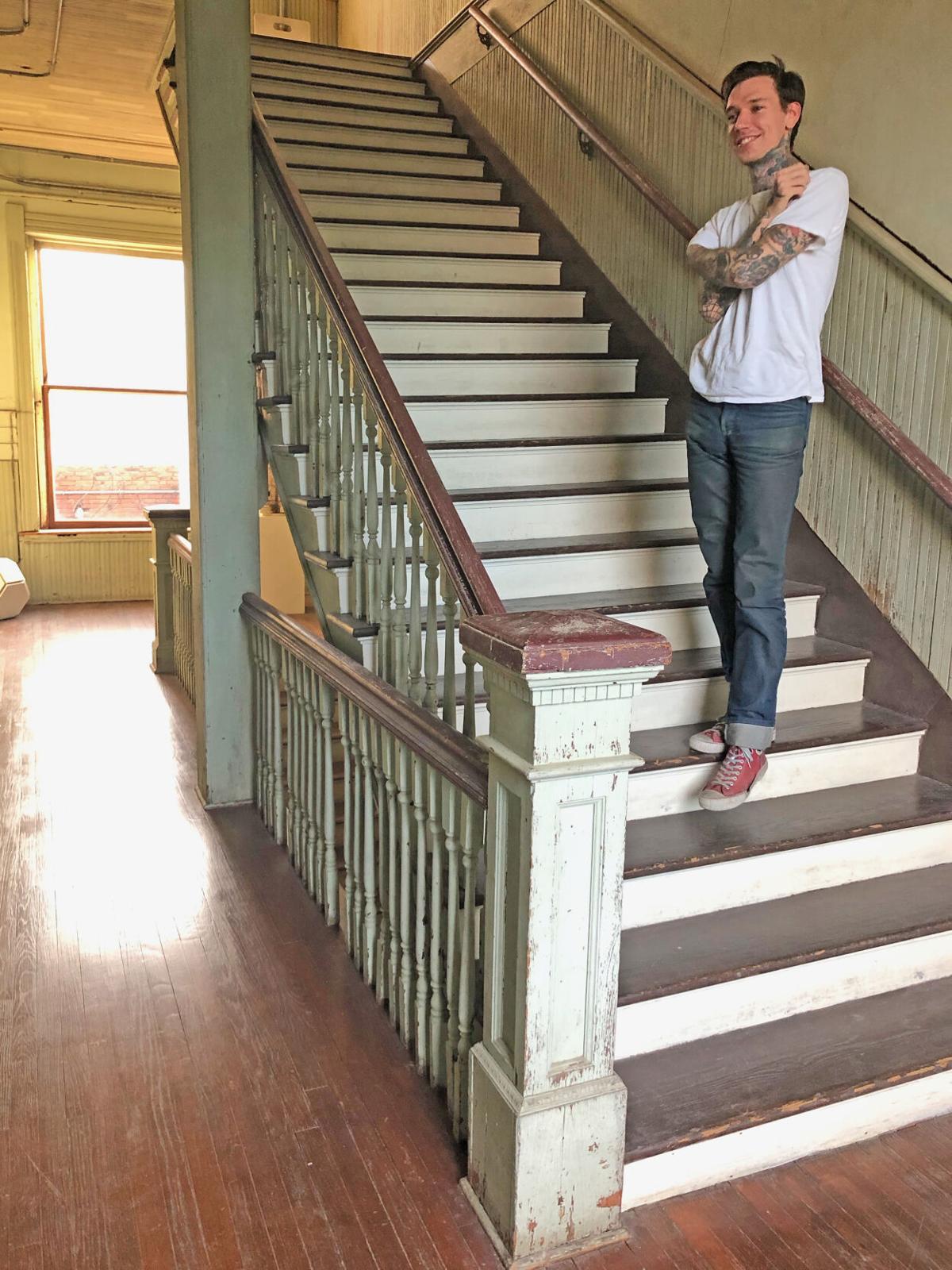 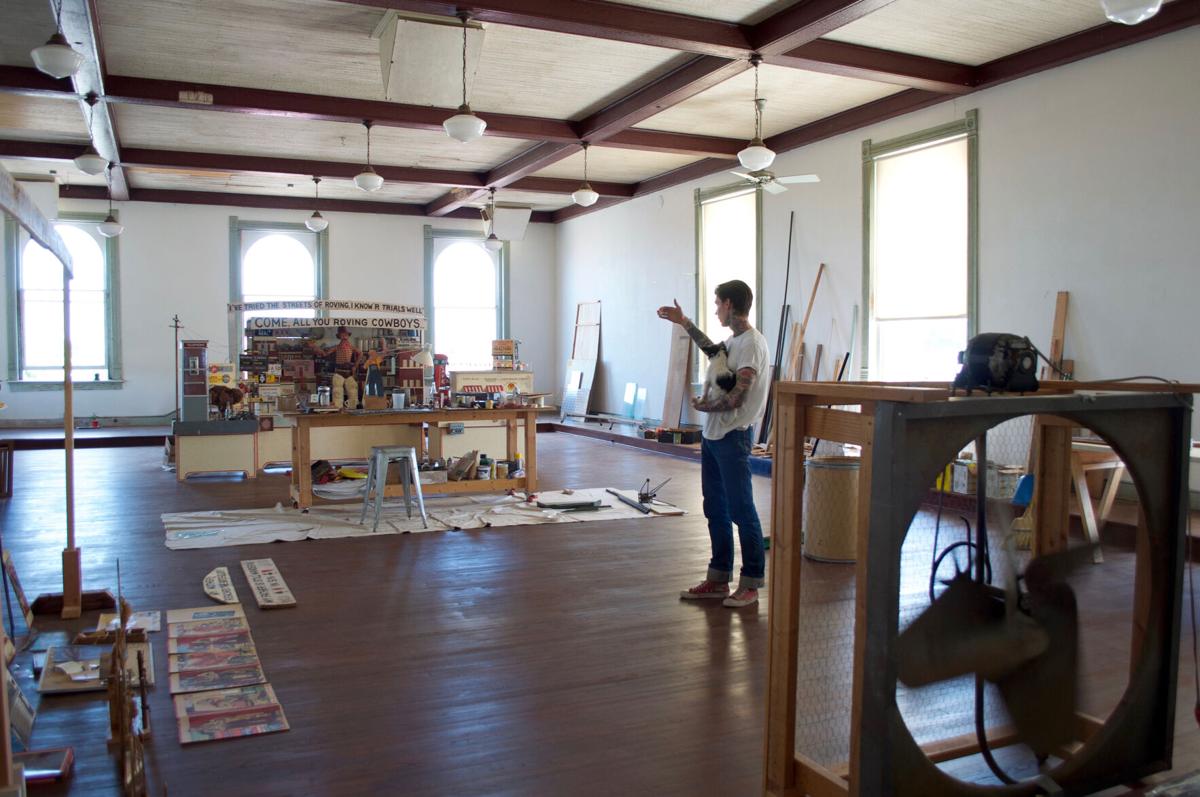 Recent 100W artist, Max Kuhn, made a life-changing decision after a three-month residency. 100W is the three-story brick building located in downtown Corsicana on the corner of West 3rd Ave. and North Beaton. Artists are selected for residency in the building by the newly established non-profit, the Corsicana Artist and Writer Residency Board. The organization partners with 100W and other local organizations to provide space for artists to create while engaging with the Corsicana community.

Thirty-one year old Kuhn is a multimedia artist from Richmond, Virginia. His website describes him as “The son of an itinerant mural painter, Kuhn’s education and approach in art are influenced heavily by this early example and the economic insecurity of his upbringing. After dropping out of high school at age 15, he began tattooing in 2008 to support an already established transient lifestyle.”

For the last 10 years, Kuhn has lived as a traveling artist, driving his truck from place to place to create and share his artwork. He dropped out of high school at age 15 and began tattooing four years later. Over the years, he has used the human body, paper, canvas, collected objects and anything else he finds, to create art.

Kuhn said he looks forward to sharing his art with the town.

“I’ve heard people talk about 100W and wonder 'What goes on there?'” Kuhn said. “This process helps people see the work any time and not just during Open Studios.”

Though Kuhn is a talented painter and sketcher, his current art form is diorama art which literally means "through that which is seen.”

Webster defines diorama as, “a scenic representation in which sculptured figures and lifelike details are displayed usually in miniature so as to blend indistinguishably with a realistic painted background.”

Visitors passing the front window of 411 N. Beaton can witness Khun’s almost life sized diorama inspired by a combination of small town rural life and his own personal journey.

Reactions to Kuhn’s art have been interesting.

“People respond to the novelty of the piece,” Kuhn said. “It feels carnival-like. Something you see at a state fair or children’s museum. It looks like a toy and people react to the nostalgia. When I am able to talk to them about it and they spend more time with it, my piece becomes uncomfortable. People begin to see the seriousness in the midst of the whimsy and humor. I work out emotional issues in my art and by keeping it childlike, it brings out a balance. The piece I did at 100W is the first of a series that I am still developing. I hid a lot of autobiography and illustration that points to my own personality development and tension and internal conflict. My piece embodies a lot about fear and discomfort.”

Though the diorama on display is complete, Kunh has more work to do.

“Nine out of ten people smile and talk about what it reminds them of. They respond as if it’s lighthearted. When the collection is complete with all of my pieces, I think people will see it in a different light and see the dilemma.”

Spencer Evan’s sculpture of G.W. Jackson was displayed in Nancy Rebel’s studio. And now, Max Kuhn’s work appears at Hobratschk’s studio at 411 N. Beaton. Kuhn’s work will be on display through the end of the year.

Kuhn reports learning a lot about himself while in Corsicana.

“My three months in Corsicana showed me I can be happy living in a small town,” Kuhn said. “I don’t need very much. I only need a safe space and privacy. It helps to not be overstimulated in a big city with lots of people. Big cities make me feel I am in competition with the local culture.”

Kuhn initially hoped to be the second 100W artist to make Corsicana his home, this writer being the first. However, Kuhn was unable to purchase a space appropriate for his home and studio. Fortunately, he found a similar small town atmosphere in northern New Mexico where he will soon make his home.

Moving from his truck into a home will allow Kuhn to join a community and be known. He spoke of the benefits of being recognized.

“If I grew up in a town like this, I would be seen and recognized in a way I haven’t been,” Kuhn said. “I have a lot of tattoos and lots of people saw me when I arrived. I felt people knew I was here and recognized me. I think being recognized could be good for our self-esteem.”

Kuhn felt welcome in Corsicana and looks forward to settling down.

“To have a role to play could be good for us. I have been drifting for so long, only in town for one to two days, I don’t become familiar to anybody. In Corsicana, I saw how quickly you go from being a stranger to being a part of the community. That is rare in our country. You can spend weeks and only interact with businesses and policies and do all your communication over a cell phone.”

100W provided me the opportunity to explore this new art form. I hope to return to painting and create several other paintings related to folklore and human dilemmas. I have been interviewing people to explore people’s views of other folk icons into the universal good.

Corsicana didn’t just claim Kuhn’s heart for small town living, it also helped him commit to his career as an artist.

“My time at 100W inspired me to push my art career further,” Kuhn said. “It made me decide to stop living on the road and pursue other mediums and not be pigeonholed in my art due to living in my pickup. When given the time to focus on art, I got to see how far I can take this if I push myself. I am inspired to seek this out in my life and further dedicate myself to making art.

It’s a really great community and I’ve made great contacts,” Kuhn said about his time in Corsicana. “I hope 100W continues to diversify the program in the types of artists, the types of work, people’s backgrounds. I didn’t go to art school or finish high school. Most of the other residents come from more academic backgrounds and are advanced in their careers. I felt I was the outlier when I saw the art and people they had before. But I feel they are expanding that. 100W is so generous and I see how much care is given to get people what they need and connect them to the community.”

For more from Kuhn, visit webbartgallery.com/max-kuhn