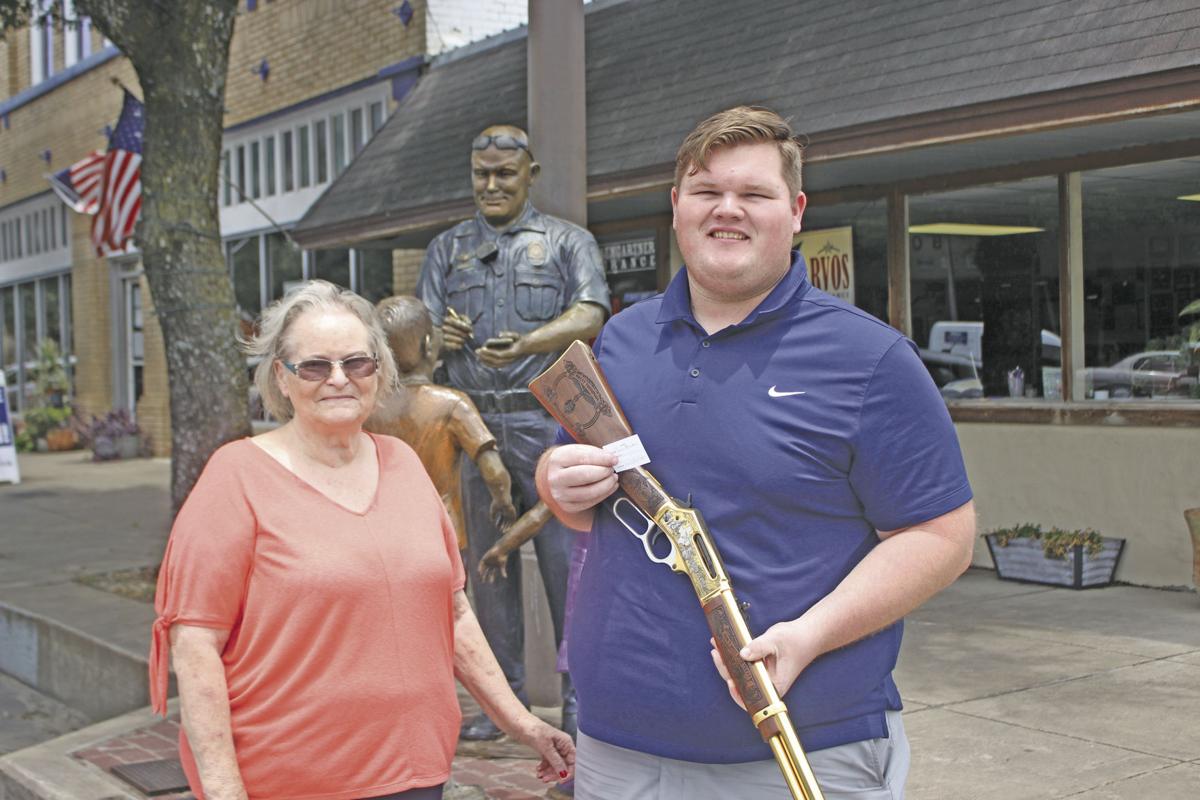 Frank Kent Country sales professional Austin Armstrong showed up to work Saturday, May 30 to find a car show in the parking lot. He plopped down 20 of his hard-earned dollars for a raffle ticket and didn't give it another thought. After all, it was for a good cause, the Brent Thompson Fallen Officer Memorial Fund.

The fund was established following the death of Corsicana native, Brent Thompson, one of the five officers killed in an ambush on police July 7, 2016 in Dallas.

To Armstrong's surprise, he got a call Monday afternoon from Sandra Woods, the woman who sold him the winning ticket. He was the new owner of a Texas 175th Anniversary Henry 30-30 lever action rifle. The rifle is 24 karat gold-plated finish with a high grade jewelers nickel inlay. Only 175 rifles were made to commemorate Texas’ birthday, and this one in particular is one-of-a kind as it features Brent Thompson's Medal of Valor engraved on the stock.

“I just bought one ticket,” Armstrong said. “But it was enough to get drawn.”

He said he does some hunting around the Chambers Creek bottom but doesn’t plan to fire the Brent Thomson Memorial Rifle.

“I am going to hang it in a case above the fireplace,” he said. “It will be passed down for many generations to come.”

Armstrong said it's an honor to own such a priceless tribute to Thompson.

“I was working in downtown Dallas when Brent was killed,” he said. “Some of my co-workers knew him and have told me cool stories about him.”

Shortly after Brent’s death, Navarro County lost an officer in a car accident.

This gave the family the idea of establishing the Brent Thompson Fallen Officer Memorial Fund.

To qualify for the $7,000 offered to fallen officers' families, recipients must be a full-time first responder or law enforcement officer living or working in Navarro County or a Navarro County native working in law enforcement elsewhere. Funds are available to families of any deceased first responder, not just those killed in the line of duty, and are often received within two days.

“Bob Reddish planned the car show. Paulette and I met with this great group at Frank Kent’s Chevrolet several times.

We had received in the mail an advertisement from American Legacy Firearms. We called and talked to Ms. Elizabeth Rodriguez. We began to look seriously into buying a rifle to raffle for The Brent Thompson Fallen Officer Memorial Fund,” Sam said.

“So we went to work organizing a group that could and would sell these tickets,” he said. “We had a goal to sell 500 tickets for $20 each. We said when we sold the 500 tickets we would announce the winner. It took only three weeks to sell these tickets. We deposited in the bank over $10,000 in ticket sales.”

“Obviously we would like to thank all who participated in the raffle and congratulate the winner Austin Armstrong,” Sam said.

The next big fundraiser will be a Car Show set for 10 a.m. to 2 p.m. Oct. 24 in Corsicana, dependent upon coronavirus restrictions.