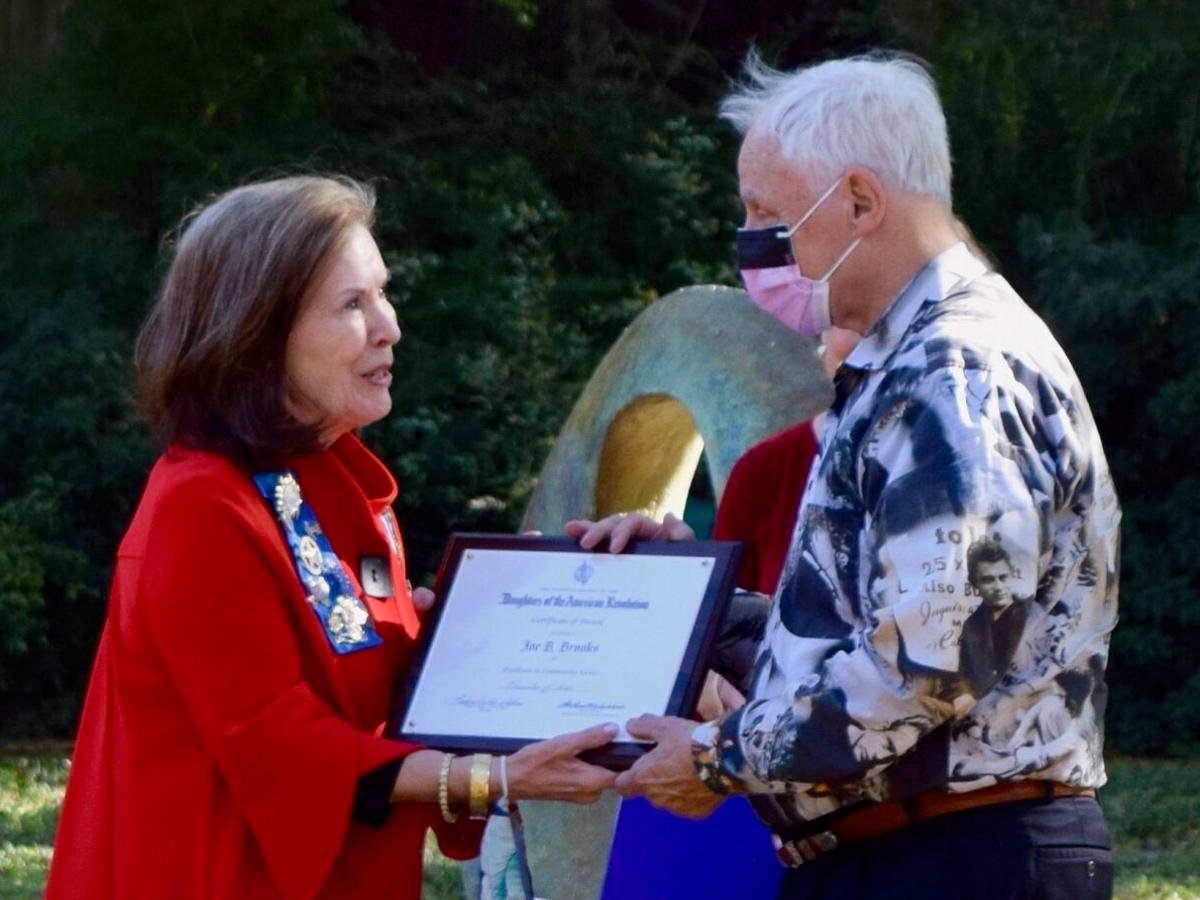 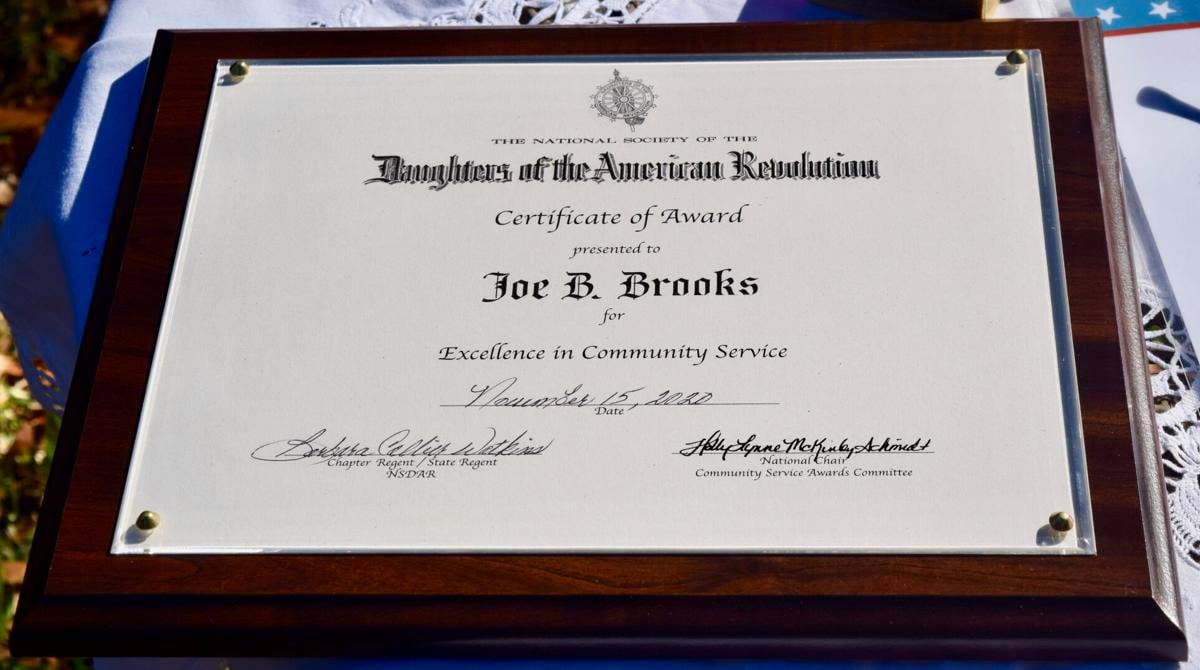 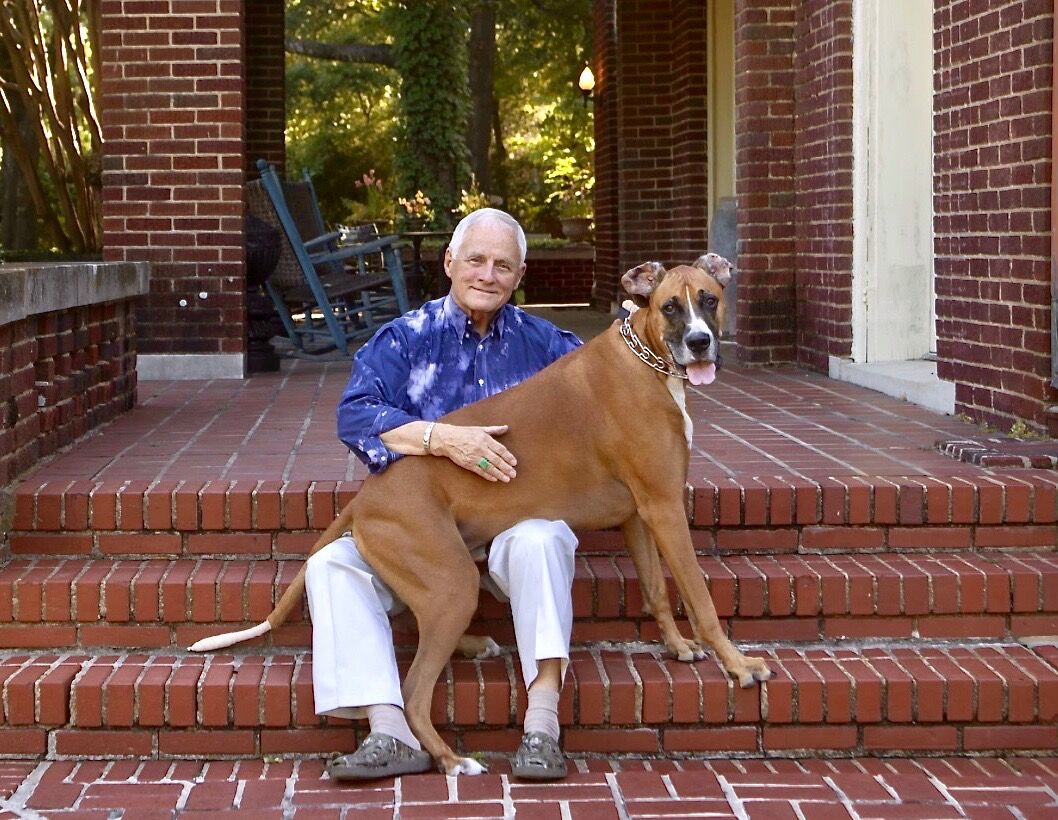 The Daughters of the American Revolution presented Joe Brooks with its Community Service Award Sunday, Nov. 15, for the countless hours of his time and dedication in improving the community of Corsicana.

The award is presented to individuals who have “contributed to the community in an outstanding manner through cultural, educational, humanitarian, patriotic, historical, citizenship or environmental conservation endeavors or by organizing or participating in community activities;” and the group said Brooks checked all the boxes.

A beautiful garden reception was held at Brooks' home, allowing for guests including Mayor Don Denbow, Dr. Steven Bell, members of the DAR, former students and colleagues, along with his sister Joan, to celebrate this marvelous award while maintaining social distancing.

Joe is a retired school principal and teacher. And that is just the beginning. In 1966, during his time as principal, Joe met Buck and Juanita Sheppard. It was then they began to discuss creating a non-profit to help those is Navarro County and various arts organizations. However, it would take almost 30 years to establish the Sheppard Community Foundation in 1996.

In the early 1970s, efforts to boost art awareness in the City of Corsicana were just beginning to take off. It was then when Joe became involved. Along with Sissie Wolens and Dean Milkus, they established the Corsicana Community Playhouse, known as The Warehouse of Living Arts Center today.

The Warehouse will celebrate 50 years of bringing art and theater to Corsicana in 2021. He founded the Navarro Council for the Arts and the Art in Public Places Committee.

In 1978, Joe moved to Santa Fe where he continued his love of the arts and founded the New Mexico Repertoire Theater and the British/American Theater Institute, then later moved to London with his wife, Anna B. Drane, where he studied in the London Acting Studio. But Corsicana beckoned and they returned once again.

Beginning in 1995, Joe and Gioia Keeney began working on saving The Palace Theater from demolition, eventually restoring it and re-opening in Feburary 2002. Joe, along with the Arts in Public Places Committee assisted in the creation of Heritage Park at the Business 45/Hwy 287 split to honor the heritage of Corsicana. Four major industries are represented: Oil, cattle, cotton, and trains.

But his contributions don’t end there. Since 2011, Joe has been an active Advisory Board member for the G.W. Jackson Multicultural Society and in July 2019, groundbreaking began on a memorial park located at 708 Martin Luther King Blvd. in Corsicana.

This memorial will honor local educator George Washington Jackson, the first Black educator and principal for Dunbar High School, which was later renamed in his honor, and will sit on the original homesite of Jackson.

Additionally, it will serve as a memorial to Lois Hart, who purchased the property in 2007, intending to restore the house and have it serve as a multicultural center and museum of African American cultural heritage, history and arts. Sadly, Hart passed away before seeing her dream come to fruition.

“Joe’s community minded efforts and belief in bringing the races together has had a significant impact on strengthening diversity in partnerships and relations in community initiatives,” stated Gwen Chance, Chair of Board, GW Jackson Multicultural Society. “The City of Corsicana and all of us are blessed by his efforts. Overall community service, outreach, love of individuals and people who need support is a major part of Joe’s DNA, and we are all better for it.”

Joe also serves on the boards of the Corsicana Visitors Bureau and the Corsicana Artist & Writer Residency. He has helped organize music and art events at the Convention Center, the Palace Theater, and the Collins Center at Navarro College. Joe has worked on the Back-to-School Rally, which provides school supplies for children.

“Joe is a leader who does servants work,” said Kyle Hobratschk, Founder and Director of the Corsicana Artist & Writer Residency. “He is an astute fundraiser, and a cheerleader for all of the artists and writers brought to his hometown where he showers their practices with enthusiastic encouragement.”

You can see another of Brooks' contributions located in Pioneer Village. Many years ago, Brooks purchased a Native American metal sculpture of a totem pole and donated it to the City of Corsicana. Today, the totem pole resides in Pioneer Village where it is now enjoyed by visitors and school children alike and is included in the story of the history of Native Americans in Navarro County.

For over 50 years, Joe has been generously been enhancing the quality of life for those of us who live in Corsicana. Congratulations, Joe.