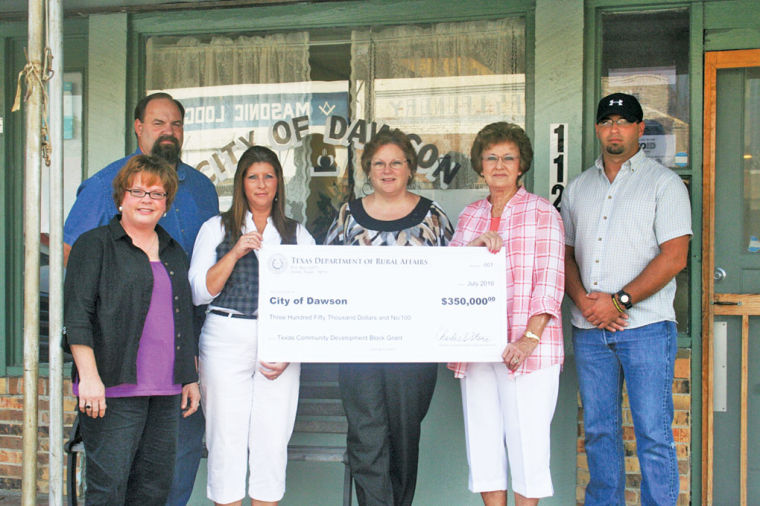 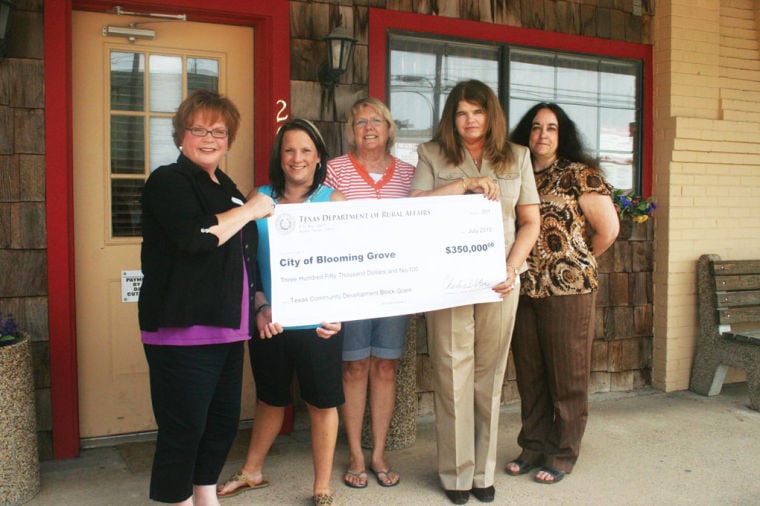 Two Navarro County communities will benefit from grants handed out Thursday by the state.

The city of Dawson received a $350,000 check Thursday from the Texas Department of Rural Affairs to help rebuild their water pipe system.

The check was presented by program specialist Michelle Spodnik as part of the TDRA’s Texas Community Development Block Grant program.

Many of the water mains in Dawson date back to 1920, meaning the grant will help to update the main feeder pipe to the water tower and reduce the need for future repairs.

Dawson first applied for the grant two years ago and has been awarded the grant after a lengthy process involving lots of paperwork, explained Dawson Mayor Linda Bryant.

“It is going towards the water lines and replacing the old water lines,” said Bryant. “It will be very helpful, when you talk about lines that have been in there since 1920 and replacing those that brake a lot, it is really helpful.”

The grant is one of 58 total contracts being awarded by the TDRA to small communities, said Spodnik.

“Every two years we like to come and bring money to these communities because it is so important to them,” she said.

“It’s a lengthy application to benefit moderate to low income communities and most of our grants are for infrastructure.”

The agency awarded more than $5.5 million to 16 north central Texas communities in the 2010 financial year Dawson and Blooming Grove.

“We are very pleased to award this grant to Dawson,” said executive director of TDRA Charles Stone. “Community projects such as this help Texans in rural communities improve their quality of life significantly.”

The City of Blooming Grove can finally start work on improving its sewer systems after receiving its $350,000 Thursday.

City staff gathered at 11 a.m. to receive the check which will help stop overflows from rain water and update the city’s waste water treatment plant.

The grant, awarded as part of the TDRA’s Community Development Block Grant program, will benefit sewer systems for up to 820 people in Blooming Grove, said Spodnik.

“A $350,000 check to do our sewers, it is the only way we can get things like this done in Blooming Grove,” said city secretary Beth Nemeth.

Blooming Grove has needed to update its sewer systems since testing by the Texas Commission on Environmental Quality between 2006 and 2007 revealed the systems did not meet minimum state requirements.

As a result the city was served with a violation notice and fined $6,500, although this actually served in helping the city to successfully bid for the grant, explained Nemeth.

Some of the clay pipelines in Blooming Grove are up to 60 years old and the treatment plant has had continuing trouble with inflow and infiltration processes when faced with heavy rain.

“We are very grateful.”

The grant will be put into use almost straight away with the city already having started the contract bidding, due to end on August 30 this year, said Nemeth.

The city originally filed for the money in December 2008, but because of paperwork, the money has only now been awarded.

“Once we get the completed contract and have done the bids selection it will still start very quickly after that,” added Nemeth.