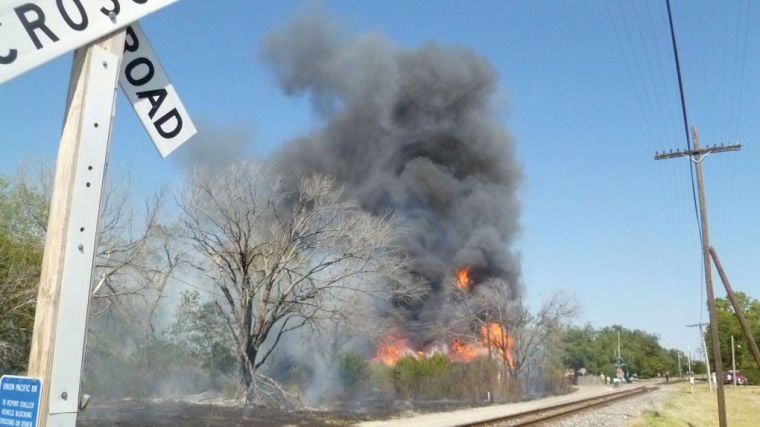 Daily Sun photo/Janet Jacobs A column of black smoke rises into the sky from the burning Coleman House in September. Before burning to the ground, it was the home of Will Coleman, the first African American veterinarian in Texas. 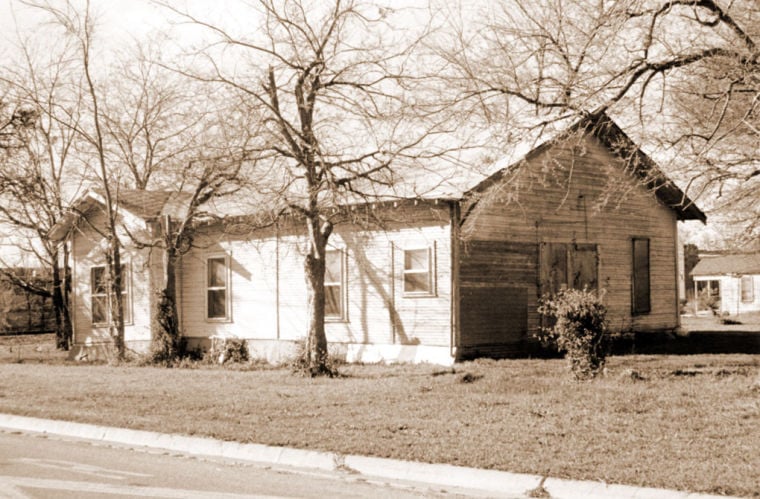 Photo courtesy of Will Downey The Coleman house as it appeared about 1980. 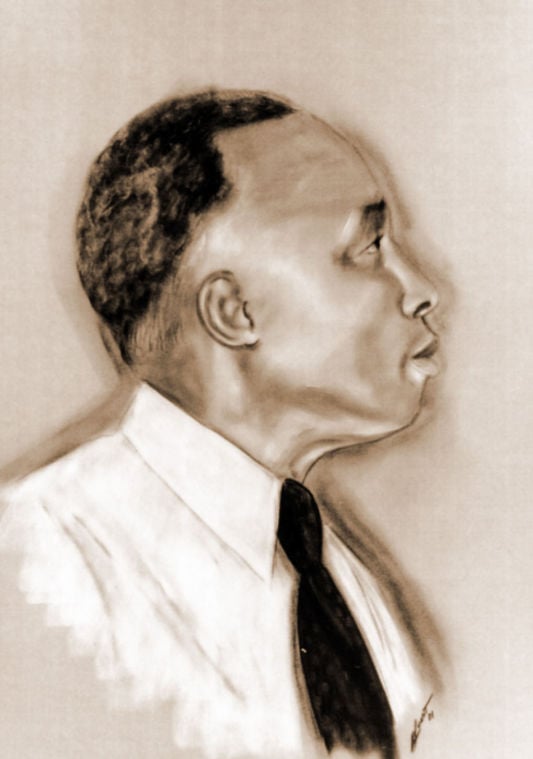 Courtesy of Will Downey An artist's rendering of Dr. Will Coleman. 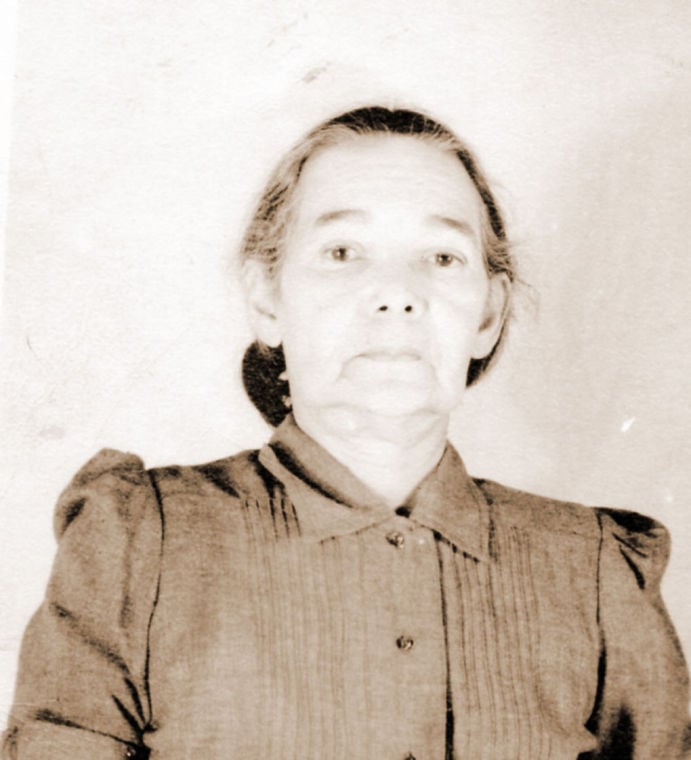 Photo courtesy of William Downey Mattie Coleman was a native American raised by a well-to-do white familly on the west side of the railroad tracks in Corsicana. When she married Will Coleman, an African American, she defied her family and friends. They eventually moved east of the tracks to raise their large family.

Daily Sun photo/Janet Jacobs A column of black smoke rises into the sky from the burning Coleman House in September. Before burning to the ground, it was the home of Will Coleman, the first African American veterinarian in Texas.

Photo courtesy of Will Downey The Coleman house as it appeared about 1980.

Courtesy of Will Downey An artist's rendering of Dr. Will Coleman.

Photo courtesy of William Downey Mattie Coleman was a native American raised by a well-to-do white familly on the west side of the railroad tracks in Corsicana. When she married Will Coleman, an African American, she defied her family and friends. They eventually moved east of the tracks to raise their large family.

When the Coleman House burned down on Sept. 25, it sparked another kind of debate within the Coleman family. What to do with the property left to the family by Will and Mattie Coleman, an inheritance that has to be split 21 different ways?

The house was the long-time home of the first African American licensed veterinarian in Texas, Will Coleman, and something of a local legend among both whites and blacks in Navarro County.

For Will Downey II, who is now the oldest grandchild of Will Coleman, the house has been an issue since 1995, when his mother passed away. Lillian was the last Coleman to live in the house. For 17 years, the house and property have been declining, with shrubbery growing up higher than the state historical marker in front.

What has to happen, in Downey’s mind, is some sort of agreement on how to handle the property now. It will cost money to clear debris from the lot at the corner of Third Street and Eighth Avenue.

Getting the family to agree on anything is difficult, Downey said. In 2010, there was an attempt to clean up the property by the Single Believers Ministry. The group recruited the Adult Probation Department community service workers who cut back roof-high brush and weeds to reveal an unpainted but dilapidated house on the lot. The idea had been to turn it into a  museum, according to Kathy Douglas, with Single Believers. But when the family couldn’t agree on the project, it stalled.

“That’s why we stopped, because he was trying to get the heirs together,” Douglas said.

Downey, who retired after 25 years in the military, is an amateur historian and genealogist, said that his grandfather was born in Chatfield in 1879. As a child, Coleman worked for a rancher named Witherspoon in Chatfield. Witherspoon had hired a tutor for his own four children, and Coleman was allowed to either sit in on the sessions or he remained in the house close enough to hear while these tutoring sessions were going on.

“He was listening and assimilating this,” Downey said, relating stories that he got from Witherspoon’s daughter.

Coleman was also good with the animals, and was encouraged by Witherspoon to take a veterinarian’s correspondence course from the Ontario School of Veterinarian Sciences in Canada. Because he needed laboratory time to fulfill his science courses, Witherspoon made sure Coleman could use the classrooms at the Chatfield girls school at night.

“That’s how he was getting his scientific work done, because he never set foot in Canada,” Downey said.

Coleman’s mail-order education began in 1895 when he was 16 years old and finished in 1911 when he was 32. While he continued his veterinarian studies, Coleman worked for ranchers and married his sweetheart, Mattie, and went to work as a delivery man for Whiteselle’s lumber yard while he tried to support his growing family.

He also moonlighted as a vet, starting around 1914 when he began doing an internship with a local white veterinarian. He won the approval of the ranchers around the county when he was called upon to treat the Corsicana mayor from an unspecified illness. The conclusion was that if Coleman could successfully treat a man then he could treat animals.

“The cute thing about this is that my grandfather became more proficient than the man he was interning with and when people called they only wanted Will Coleman,” Downey said.

In the mid-1910s, the out–of-state and out-of–country diploma mills came under attack. Rather than outright deny the right to practice to anyone who hadn’t studied at Texas A&M, the state allowed the students to take a test to prove their knowledge. Coleman was a black man who hadn’t even attended high school or college in Texas. He once again used the influence of the wealthy local ranchers in Navarro County who liked him to get him into the exam.

In 1919, Coleman is listed as one of the “non-graduates” to pass the veterinarian exam. He became the first licensed African-American veterinarian in Texas.

When Coleman first moved to Corsicana he was living in the mayor’s guest house on the west side of the city, not the east side, which was where blacks were allowed to live legally. Three of his 12 children were born in that house.

In about 1910 or 1911, his family moved to the house at the intersection of Third Street and Eighth Avenue. The area was not considered part of the African American community since most of the houses around there were owned by whites or Hispanics.

Coleman’s wife, Mattie, ran the business side of the practice while raising their children and cooking and cleaning for 14 people. Standing only 4-foot, 11-inches tall, with long hair that brushed the floor, when she spoke people listened.

“That little lady was the one who was actually the backbone of the Coleman family,” Downey recalled, “not my grandfather.”

The business didn’t bring in a lot of cash, and payment records often showed “a bushel of corn,” or “bale of hay” in exchange for Coleman’s services. His reputation was solid, and it was Coleman who treated the animals from the circus who were hurt or sick when the shows came through town. He often traveled outside of town, as well, going as far north as Denton and as far south as Bremond in his horse-drawn wagon. Will Downey, his grandson, and Ruth Coleman, his youngest daughter, sometimes went with him on his rounds. He often left before sunrise returning after dark, if he returned in a single day at all.

Meanwhile, Mattie kept the family together. Photos of Mattie as a girl show a breathtaking young woman with pale skin and almond eyes. Her father was a full Towakoni native American, but she was considered white. She came to live with a wealthy white family in Corsicana, and traveled with them as one of their own children, taking trips to Europe and South America. Her friends were not pleased when Will Coleman began courting her, but at their wedding at the Sixth Avenue Baptist Church, all her bridesmaids were her white girlfriends.

Will Coleman was considered “the black vet,” but his customers were almost all white ranchers. He practiced throughout northeast and central Texas until his death in 1953. His death seems to have been a confluence of an infected horse bite and cancer. The pallbearers at his funeral were his clients, including Sheriff Rufus Pevehouse.

For Downey, the story of his grandparents is one of overcoming segregation through the power of personal accomplishment. He notes the times that his family mixed business and pleasure with their white counterparts in the community, and they were respected.

In 1934, when Downey was a small boy, he was hit by a car. Light-skinned with blue eyes, he was taken to the hospital, but they quickly ascertained that he was from an African-American family and almost refused to treat him. However, the information that he was “Dr. Coleman’s grandson,” won him the treatment he needed at the whites-only hospital.

“It’s an incredible story,” Downey said of his grandfather’s life.

His part in the story seems to be clearing up the truth from the fiction.

“There’s all kinds of misinformation out there,” he said. “My mother said all her sisters and brothers had a college education. That’s not true.”

Coleman’s mother was Lillian Margarite Coleman, a graduate of Prairie View who became a teacher and principal. She moved back to Corsicana in 1965 to care for her aging mother, became heavily involved in politics and community service for the veterans administration, the historical society, the park, library and VFW.

The house, which had declined to a skeleton of a home with unpainted walls and sagging porch, and brush and weeds hiding it from the street, is now gone. It will be up to the family to decide whether or not to sell the property or keep it.

The historical marker, pointing out Coleman’s accomplishments, is one of the few things still standing on the property now.