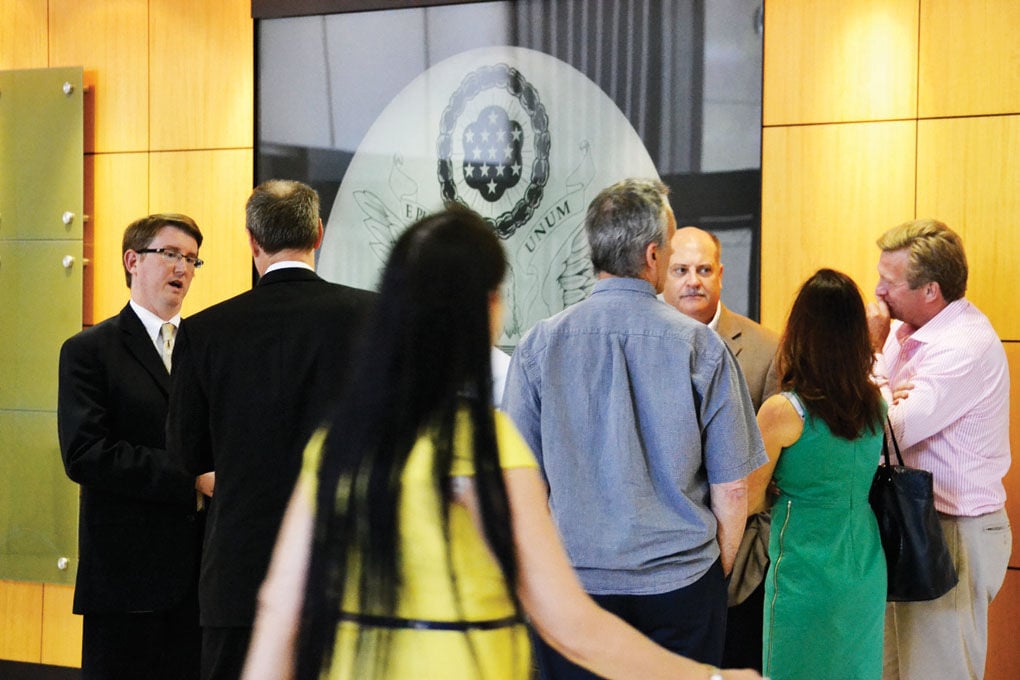 Daily Sun photo/Janet Jacobs - Collin Street Bakery's Hayden Crawford, right, and Bob McNutt, second from left, confer with others in the lobby of a federal court in Dallas Tuesday following a hearing in the case of Sandy Jenkins, accused of stealing nearly $17 million from the bakery. A federal judge accepted a plea deal in the case. 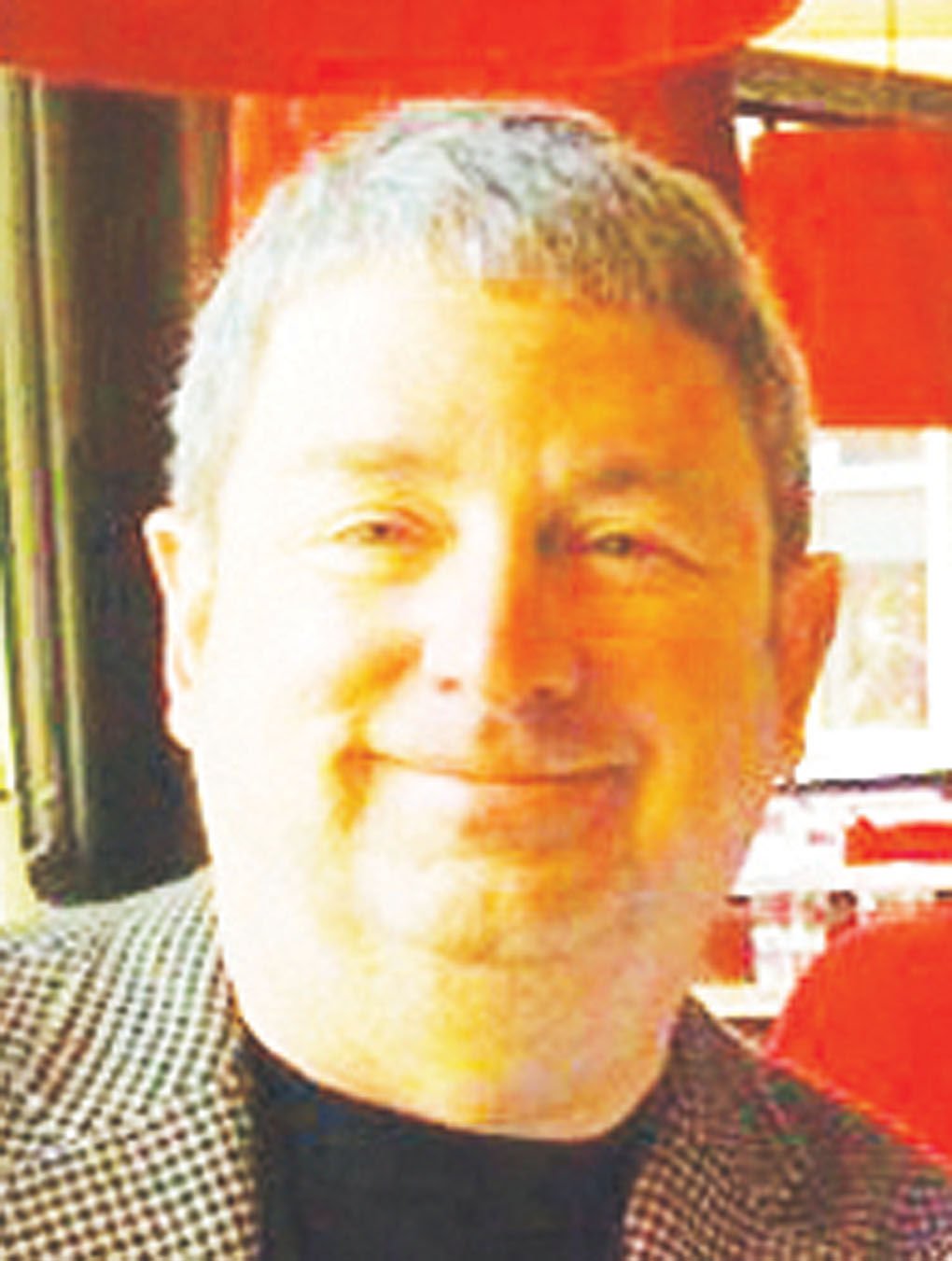 Sandy Jenkins pled guilty to three counts Tuesday in connection with the theft of nearly $17 million from his former employer, Collin Street Bakery.

Daily Sun photo/Janet Jacobs - Collin Street Bakery's Hayden Crawford, right, and Bob McNutt, second from left, confer with others in the lobby of a federal court in Dallas Tuesday following a hearing in the case of Sandy Jenkins, accused of stealing nearly $17 million from the bakery. A federal judge accepted a plea deal in the case.

Sandy Jenkins pled guilty to three counts Tuesday in connection with the theft of nearly $17 million from his former employer, Collin Street Bakery.

DALLAS  — There weren’t a lot of surprises when Sandy Jenkins pleaded guilty Tuesday to mail fraud, conspiracy to commit money laundering and lying to a federally-insured bank Tuesday afternoon, except perhaps that Jenkins claimed to be bipolar and was on lithium and Wellbutrin.

Regardless, U.S. Magistrate Renee Harris Toliver pronounced him in his right mind, and accepted the guilty plea.

“I find you fully capable of entering a voluntary plea,” Harris Toliver said. The plea was made in the Earle Cabell Federal Building in downtown Dallas.

Jenkins, 65, appeared shrunken in an baggy orange jumpsuit and soft-soled blue canvass shoes. His salt-and-pepper hair was cut short, and he wore black-rimmed glasses with thick lenses. Although the small courtroom in the Earle Cabell Court building was packed with Collin Street Bakery employees and his immediate family, Jenkins avoided eye contact with the rest of the room, staring at his lawyer, Brett Stalcup, and the Assistant U.S. Attorney General Nicholas Bunch while he waited for his turn to plead.

Kay Jenkins’ silver-gray hair was cut short and wavy, and she wore an orange camisole under a white linen shirt. She didn’t have on any jewelry or make-up. Her daughter, Allison, wore slacks and a light pink shirt. Both refused to talk to the press following the hearing. Kay also faces charges involving money laundering, conspiracy and lying to a bank.

On April 25, Jenkins signed the plea bargain, which offered to cut the number of charges — and potential punishments — if he’d plead guilty without a trial. The maximum he could face is 60 years, forfeiture of $16.6 million, and fines in excess of $1.75 million.

When Judge Harris Toliver asked if Jenkins understood that by pleading guilty that he could be subject to all the consequences, Jenkins asked for a moment with his attorney, and they talked briefly away from the microphone. When Jenkins came back on the record, he said understood.

Harris Toliver then explained that even if his sentence is more severe than expected he’s still bound by his guilty plea. Jenkins said he understood, before entering guilty pleas to all three counts.

Sandy Jenkins is alleged to have embezzled more than $16 million over the course of eight years from the Collin Street Bakery in Corsicana, where he worked as the comptroller. His job of writing checks to pay the bakery’s bills, and then reconciling the bank accounts, allowed him freedom to write checks to pay his own personal bills then void out those checks and write others to cover his tracks. Lacking any internal audits, Jenkins lived a lavish lifestyle that included trips on private jets, a second home in Santa Fe, New Mexico, an extensive Rolex watch collection, and new luxury cars that he traded in several times a year. On paper, he made about $50,000 a year from the bakery, but he was spending $3 million a year.

In the supporting documents, called a resume of facts, filed with his plea agreement, Jenkins revealed that his wife did know the money was illegitimate, although she may have thought it was kickback money, and that she knowingly signed the mortgage papers on their vacation home to say that he made more money than he did.

The hearings began around 11 a.m., and Jenkins came up fourth in the queue, so had to sit through the pleas of a drug dealer and a couple of other federal prisoners before his own turn came up. He often appeared bored, sitting with his arms crossed, or propping his head up on his arm. His feet remained in shackles, but his arms and hands were free until he was led out of the courtroom, at which point he was handcuffed.

As she went through the laundry list of warnings and cautions, the judge asked if he had been made any promises or if he’d been forced into signing the agreement, and responded “no ma’am,” to both questions.

She also reminded him that if he’s convicted that he could give up the “valuable rights” of a citizen including the right to vote, to hold office, to serve on a jury and to own a firearm.

“Do you understand you’re giving up these rights under the terms of this plea agreement?” Harris Toliver asked.

She also asked him if he was waiving his rights to an appeal or challenge his sentence except under very limited circumstances, and he said he did.

When all had been done, and Jenkins thanked the judge very politely, his lawyer asked for a few follow-up questions on the record. Stalcup asked Jenkins if the plea agreement had been changed since it was signed on April 25. Jenkins said it had not. Then Stalcup said: “I make you no promises, no guarantees, nothing?”

There were no outcries or reactions from his wife or daughter, who appeared calm throughout the hearing. The bakery personnel appeared equally calm. Bakery head Bob McNutt declined to comment, saying he’d reserve comments for after the sentencing.

Janet Jacobs may be reached via email at jjacobs@corsicanadailysun.com.