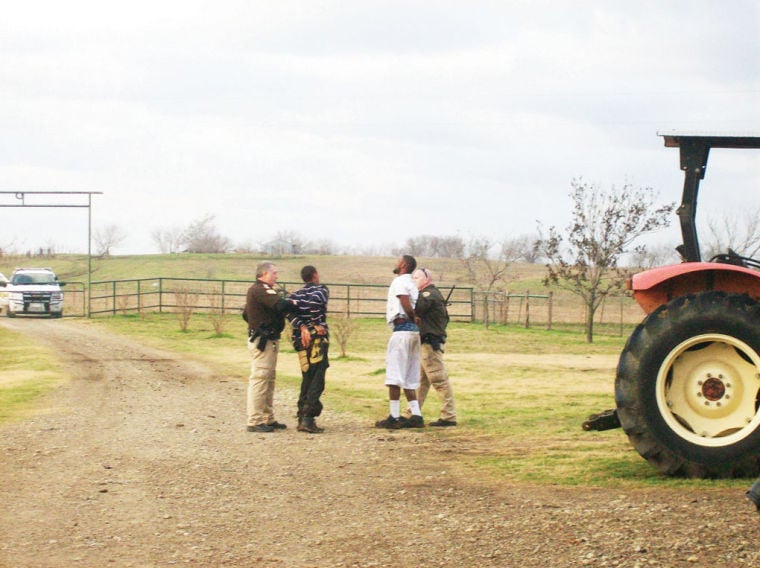 Photo courtesy Judy Parten Sheriff's deputies take Donald Atkins (in striped shirt) and Shamicheal White (in shorts) into custody Wednesday after they were detained by a homeowner in Chatfield. The two are suspected of a Christmas Eve car-jacking incident in Corsicana. 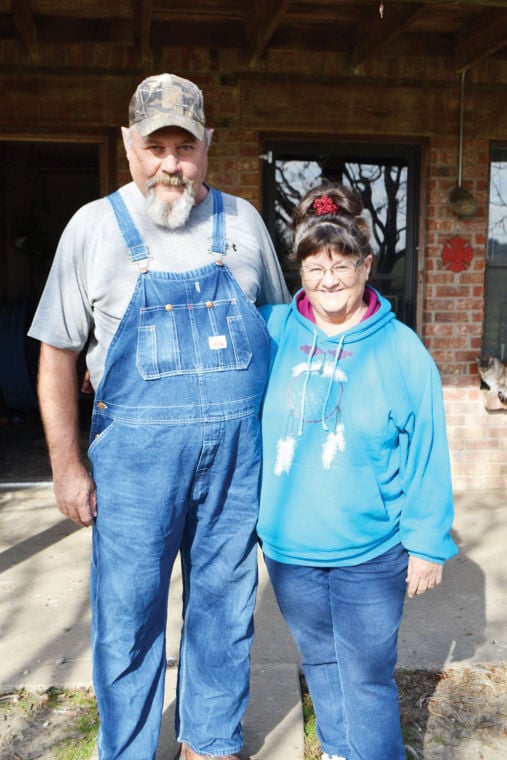 Daily Sun photo/Janet Jacobs Armed with a shotgun and a rifle, Ken and Judy Parten of Roane held two alleged robbers until deputies arrived Christmas morning when the suspects showed up in the Parten's front yard. 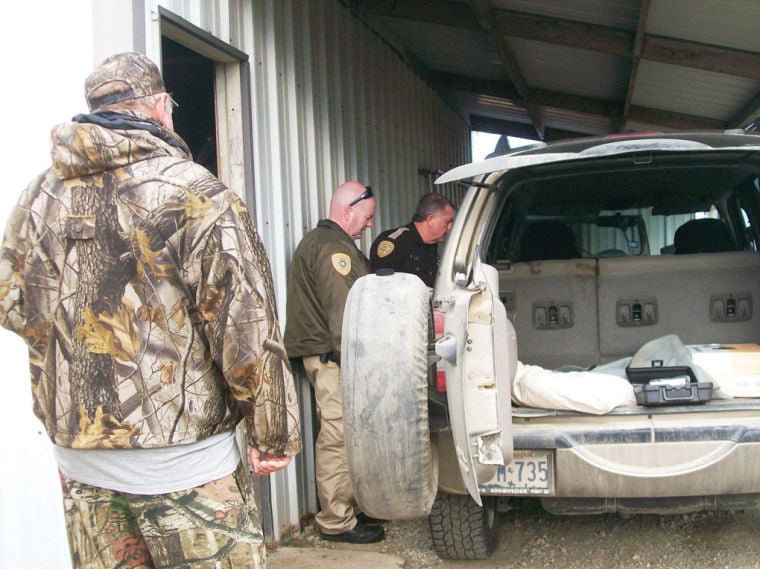 Photo courtesy Judy Parten Sheriff's investigators search a vehicle two car-jacking suspects are believed to have spent the night hiding from law enforcement. The pair was detained by Ken and Judy Parten when the spotted them Christmas monring.

Photo courtesy Judy Parten Sheriff's deputies take Donald Atkins (in striped shirt) and Shamicheal White (in shorts) into custody Wednesday after they were detained by a homeowner in Chatfield. The two are suspected of a Christmas Eve car-jacking incident in Corsicana.

Daily Sun photo/Janet Jacobs Armed with a shotgun and a rifle, Ken and Judy Parten of Roane held two alleged robbers until deputies arrived Christmas morning when the suspects showed up in the Parten's front yard.

Photo courtesy Judy Parten Sheriff's investigators search a vehicle two car-jacking suspects are believed to have spent the night hiding from law enforcement. The pair was detained by Ken and Judy Parten when the spotted them Christmas monring.

Ken and Judy Parten had a memorable Christmas this year. They caught two alleged car-jackers in the driveway of their home near Roane.

“This is one of the things I moved out of Dallas for,” Judy Parten said. “You expect this sort of thing in Dallas.”

The incident began around 5:30 p.m. Tuesday when Donald Atkins, and Shamicheal White, both of Shreveport, allegedly held a man up at gunpoint to steal his white Camaro at the car wash on West Seventh Avenue. The two took off on a high-speed chase, crashing on Farm-to-Market Road 1603, in the Chatfield area, easily three miles from where Ken and Judy live. With the suspects on foot, it turned into a five-hour manhunt, with about 30 officers, tracking dogs, a helicopter and men on horseback. It was finally called off just before midnight, with the suspects still on the loose.

Ken was getting frequent updates from his friends who have scanners and the neighbors as the hunt came closer to their house. Judy had gone to take a pecan pie to the neighbor’s and then got stopped by police trying to get back to the house. It took them until 2 a.m. to finally get to bed Christmas morning. With nine dogs, they also had to make a decision — let their pack stay outside or keep them indoors. They choose to keep them inside, just in case.

“The guys had to be nuts or something,” Judy said. “We didn’t even have a clue they’d still be in the area.”

Normally early-risers, the couple overslept and didn’t get roused until about 8 a.m. Christmas morning. As Ken went to take a shower upstairs, Judy went downstairs to let the dogs out and that’s when she saw a stranger opening the door of Ken’s pickup. She called for Ken, but with the bathroom door closed, the heater and shower running, he didn’t hear her.

“The good Lord was looking out for us,” Judy said. “I figured the guy would go. I was totally in shock. But he turned and headed for the house. I didn’t have time to do anything but grab the gun and tell him to ‘stop.’ He wasn’t stopping. When I really went berserk was when he reached for the door. I said ‘I will kill you. I have a 7-Mag rifle and I will kill you,’ He held his hands up and backed up.”

The man didn’t leave her porch, though, which unnerved Judy. Again, she gives credit to God for helping her in the situation.

“I was just literally beside myself. I just got real calm. He said ‘I don’t mean you no harm, I just need the phone.’ I said ‘Let me tell you what I’m going to do.’ I got real calm and I was real sing-songy, because before that I was hysterical. ‘I’m going to put my rifle down and shut my door and lock it get go get the phone and I’ll come back and hand you the phone and let you call whoever you want to, but you’ve got to get on back off my sidewalk.’ That’s not what I did. I never intended to.”

Judy shut the door, locked it, and raced back into the computer room where she grabbed the phone and her camera, dialed 9-1-1, then barreled upstairs to get Ken.

Where Judy said she’d been anxious and “scared as crap,” Ken, a retired firefighter, was calm and easily took in the situation. His rifle was steady as he forced the two onto the ground to wait until deputies arrived. Meanwhile, Judy was busy taking pictures.

“When she comes thundering upstairs, I know it’s something bad,” Ken said. “She’s hollering at me ‘the criminals are here.’ I thought they were in the pasture or something.”

Judy had the rifle, Ken got his shotgun and went out to deal with the man who was just a few feet from their front door.

The other man, dressed in shorts and a T-shirt, came out from behind the tractor and immediately went to the ground. The one who’d come to the door continued to try to talk his way out of the situation, gesturing with his hands until he finally got the message that Ken was serious.

“It’s scary because you don’t know what you’re going to be forced to do,” Ken said.

Deputies spent hours on Christmas Day on the farm with Ken and Judy, taking photos, fingerprinting things, and looking for the gun allegedly used in the robbery. The couple finally made it into town for Christmas dinner around 2:30 p.m., where they ended up at Jack in the Box.

Turns out, the two apparently spent part of the night huddled in Judy’s Jeep under her dog mat, leaving the interior of the car mud-splattered and the glove compartment ransacked.

And the adventure hasn’t ended yet. Thursday, Judy went back to work as a part-time post-office worker and it seemed like everyone in Chatfield knew.

“It was like old-home week,” she said. “I had people bringing me donuts and cupcakes. I said ‘I ain’t no hero. I was scared.’”

Ken echoed that sentiment. “I’m no hero,” he said. “It’s what you have to do at the time.”

Judy said she’s still a little spooked, even though the two suspects have been booked on charges of aggravated robbery and are facing even more charges down the road.

“There’s no doubt in my mind he would have hurt me. He would have gotten me in a New York minute,” Judy said. “It was the worst Christmas I’ve ever had.”

The couple expressed gratitude for the sheriff’s deputies, and specifically deputies Keith Lewis and Rickey Jamison.

During questioning, White began showing signs of hypothermia and was taken to the hospital where he was treated for exposure to the cold, according to the Sheriff’s report.

Both were arraigned Thursday afternoon by Justice of the Peace Vicki Gray on charges of aggravated robbery, evading arrest and criminal trespassing. They remain in the Navarro County Jail in lieu of $256,000 bond each.