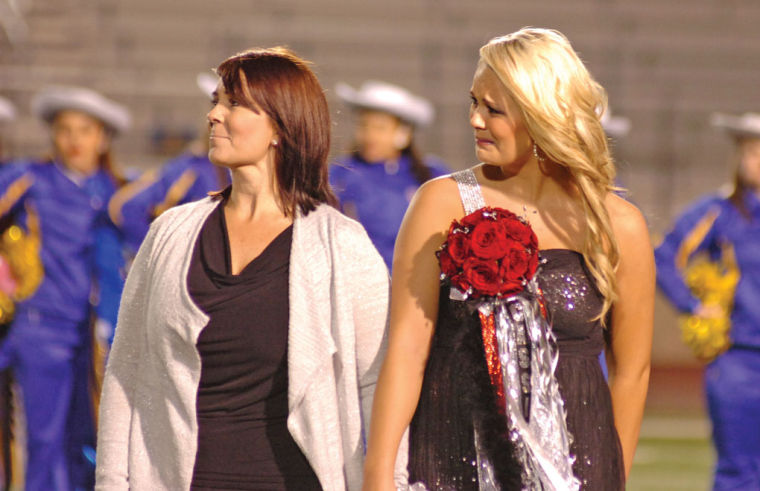 Daily Sun photo/Ron Farmer Lisa Jock, left, and daughter Cassidy, right, a homecoming queen nominee at CHS, listen as the voice of Cassidy’s father, Robbie, is played at the event. Robbie Jock is in Afghanistan, and the audio hookup was a surprise arranged by a family friend. 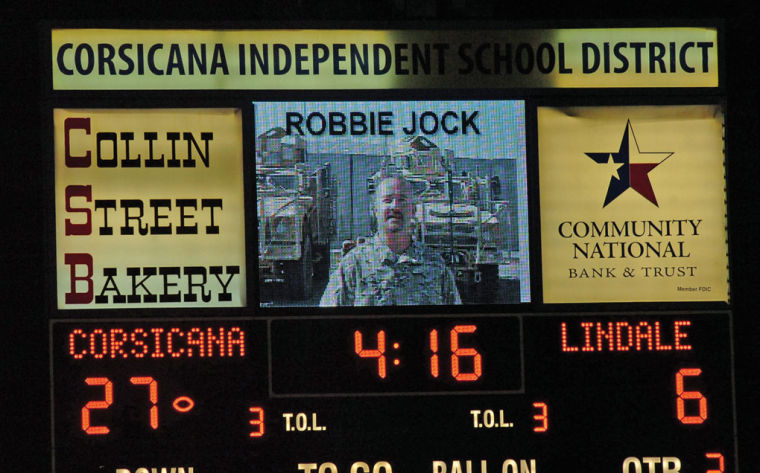 Daily Sun photo/Ron Farmer An image of Robbie Jock appears on the Jumbotron at Tiger Stadium Friday, as his daughter Cassidy is introduced as a homecoming queen candidate. Jock is in Afghanistan.

Daily Sun photo/Ron Farmer Lisa Jock, left, and daughter Cassidy, right, a homecoming queen nominee at CHS, listen as the voice of Cassidy’s father, Robbie, is played at the event. Robbie Jock is in Afghanistan, and the audio hookup was a surprise arranged by a family friend.

Daily Sun photo/Ron Farmer An image of Robbie Jock appears on the Jumbotron at Tiger Stadium Friday, as his daughter Cassidy is introduced as a homecoming queen candidate. Jock is in Afghanistan.

At the Oct. 12 Corsicana Tiger pep rally, Christina Janecka sat with long-time friend Lisa Jock. Friends since high school, their daughters Brooke and Cassidy are also close friends, so when Cassidy was announced during that pep rally as a homecoming queen nominee, they were both ecstatic.

As the two friends teared up and hugged, Lisa said to Christina, “You realize I’m going to have to be the one to walk her, with Robbie being gone?”

Cassidy and sister Colby Jock’s father, Robbie, is a police officer who has been employed by a company in Afghanistan for several years. And though their parents are divorced, there is a strong bond between father and daughters, as well as between the girls and their mother.

It had been a dream of Lisa’s that her father would be the one to walk a daughter of hers, should they be nominated, and their father wasn’t present. But her dad, Ed Johnson, passed away a year ago. And to add to the poignancy of that day for Lisa, Oct. 26, the day of the homecoming game, would have been her dad’s birthday.

“When I left the pep rally, I was talking to Jeri Watkins, and she asked why I was crying,” Christina said. “I said it made me sad that Robbie wouldn’t be here to take part in this ceremony with them, and Jeri mentioned that perhaps there should be something done on the Jumbotron.”

After hanging up with Jeri, Christina immediately called Billy Harlan, who said there was no way to do a live feed on the Jumbotron/scoreboard. He said if I could get a video, they could play it at that time. They could get Jock on Skype and have his voice, and him be able to see the happenings on the field, as well.

“The Skype thing stressed me out worse than anything, because I’d never used that!” Christina said.

She had an email address for Jock, but no cell phone number. Determined to keep it a secret from Lisa and the girls, Christina emailed Robbie and kept her fingers crossed. He emailed her back that night, and called her cell early the next morning. Their connection was terrible, so he emailed her back to tell her he was out in the field staying in a tent, but would return to civilization in a few days, and would get back in touch with her.

“The video came through on October 25, the day before the game,” she said. “I had been panicking that we wouldn’t get this together in time.”

The night of the game, the video would not play on the Jumbotron, so Karen Vandiver and Cody Grace both jumped in and pulled a still shot of Robbie from the video to put up on the scoreboard. They played his voice over the public address system. Christina was on the sidelines of the field with Jeri Watkins’ iPad skyping Jock.

“The gist of all of it is, our girls are close, and Lisa and I have been close through the years, and I wanted Robbie to be part of this, because I know how much his girls love him,” Christina said. “I didn’t want him to miss out on this special night for Cassidy ...”

On the sidelines, Colby was taking photographs of her sister and mother, and Robbie waved at her via Skype. Colby told Christina she couldn’t believe she pulled that off, and Christina responded she had no idea how close it came to not happening, considering the technical challenges they had.

At first, when Cassidy came off the field, she didn’t speak, and Christina feared she was angry with her. Later, Lisa sent her a text saying how grateful they are were, and how overcome with emotion Cassidy was about seeing her dad.

“I’m glad it all worked out,” Christina said. “I did this because I love Cassidy as if she were my own daughter.  I cherish my friendship with Lisa and admire her relationship with her girls.  I knew this would mean the world to not only Cassidy but to Robbie as well.  Him being away is hard for all and this would be something they could all cherish.”