All proceeds raised from the Orange Out Event were donated to the National Multiple Sclerosis Society under the name “Corsicana Heroes.” Anyone interested can donate on the organization’s website. 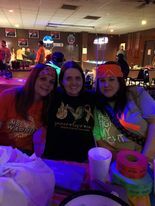 All proceeds raised from the Orange Out Event were donated to the National Multiple Sclerosis Society under the name “Corsicana Heroes.” Anyone interested can donate on the organization’s website.

It turns out that the color orange isn’t only reserved for fall, Halloween or pumpkin spice anymore. The color is also common in the month of March, which is Multiple Sclerosis Awareness month.

Multiple Sclerosis, or MS, is an autoimmune inflammatory condition affecting approximately 400,000 in the United States and two and a half million people worldwide. Multiple Sclerosis effects nerve cells in the brain and spinal cord, by stripping away the fatty substance protecting the cells.

“The body’s immune system attacks its own nerve cells, it causes communication problems between the brain and the rest of the body,” said Heather Burleson, of Corsicana, who is living with the disease.

“It’s like speaker wire, that covering, or myelin, makes the communication clearer between the brain and the spinal cord,” she said.

Having that damaged can affect vision numbness or cause difficulty walking, though MS is a complex disease, and sometimes progressive disease that affects people differently.

Heather, was first diagnosed with Relapsing Remitting Multiple Sclerosis in Sept. 2015. However, her form of MS is more progressive.

“My diagnosis has changed; in November of 2019, I was told it changed to Secondary Progressive Multiple Sclerosis,” Burleson said.

“I was diagnosed nearly six years ago. In the beginning I was severely depressed, it was the worst possible news I could have received.”

Heather was a college student and a new mother, and at the time her husband was on the road working, she recalled.

“Looking back is difficult sometimes, but I am now married to my best friend Jordan, who is my biggest supporter,” she said.

Together they have two children, ages 7 and 4.

Burleson was the first in her family to have MS and said she and her family learned about the disease, and what could help or hinder her recovery.

“I spent many weeks in the hospital before going home.”

Burleson said she transitioned from a wheelchair to a walker to a cane and can now walk without assistance some days.

She credits her family friends and pool league members for being part of a support system.

“We never fight alone,” she said. “We thank everyone in our support systems, as well as those who are willing to learn and adapt with us.

My friends and family have been supportive and understanding she said, although it is frustrating that plans sometimes change depending on how I am feeling that day.

The best thing I’ve learned is to try my hardest to do things when I can, but also be willing to accept help when needed.”

Burleson said she does wish that more things were accessible to those with disabilities, especially here in Corsicana.

“I try to remember that when relapses happen asking for help doesn’t make me weak, by reaching out for help makes me human.”

The 2021 Orange Out Event was Burleson’s fourth to bring awareness to Multiple Sclerosis. It was hosted by the VFW Post 3366 in Corsicana March 20.

All proceeds raised from the event were donated to the National Multiple Sclerosis Society under the name “Corsicana Heroes.” Anyone interested can donate on the organization’s website.

She said she’s already looking forward to next year’s event.

Burleson is one person living with Multiple Sclerosis, but she knows she’s not alone.

“Along with being a wife and mother, this is my mission since being diagnosed. If I can help spread the word or awareness to people, I’ve done my job.”