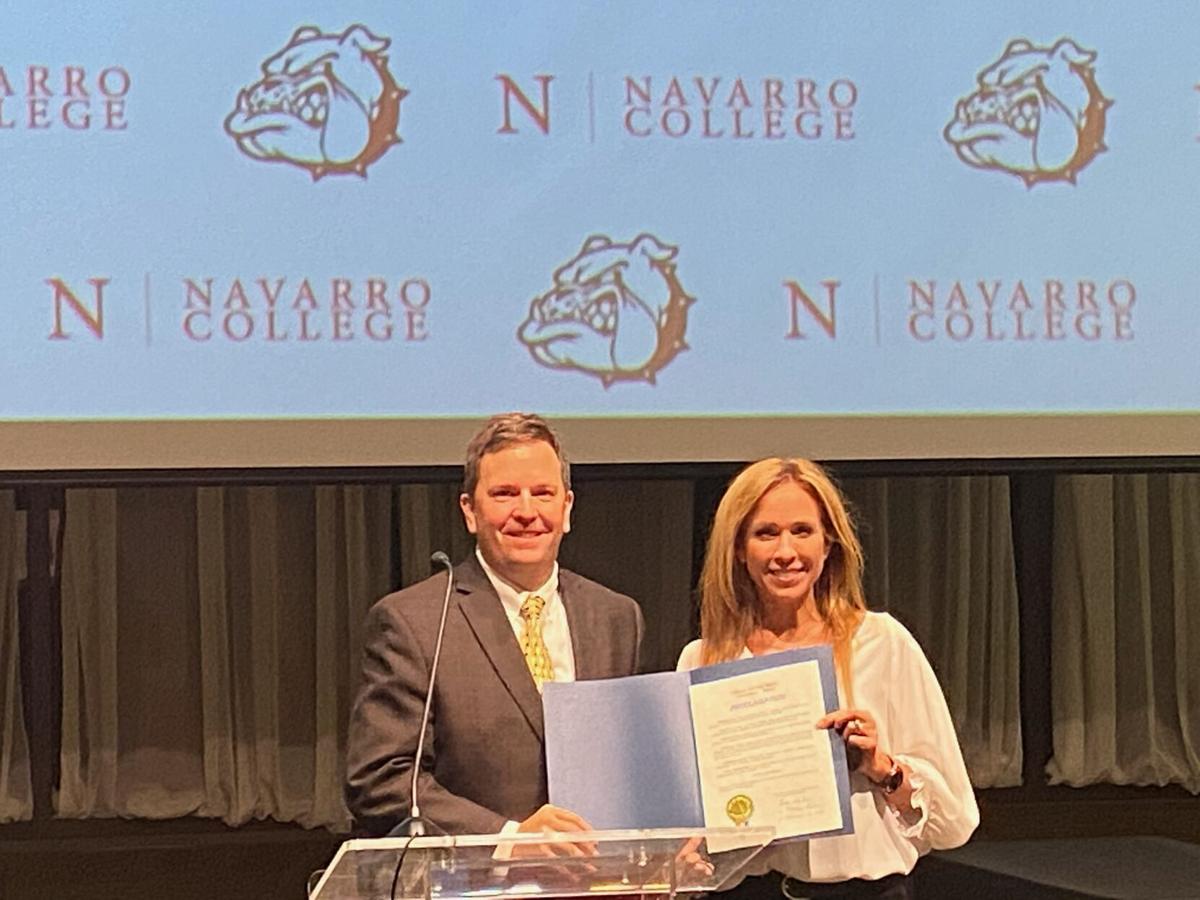 Navarro College Trustees welcomed Monica Aldama to the group’s regular meeting Thursday, Nov. 12. Trustees recognized the coach of the 14-time champion cheer team for her leadership and efforts to highlight Navarro College, and the community following a recent stint on Dancing with the Stars.

Aldama was also recognized by Texas’ Sixth District Congressman Ron Wright, who sent a flag that was flown over the Capital to mark the occasion, as well as pictures taken with the cheer team during a pre-pandemic visit to the college.

Trustees also approved a pair of tax abatement agreements, at Thursday’s meeting one with Armadillo Solar Center, which plans to construct a 200-megawatt solar farm across 2,300 acres about a mile north of Mildred High School on Hwy. 287.

The project will be built with the cooperation of 6 adjoining property owners who are now under a lease.

According to its website, Armadillo Solar Center will use over 600,000 solar panels to generate more than 440,000 megawatt hours of energy annually, or enough energy to power almost 42,500 homes.

Construction of the solar farm is on track to begin in 2022, with energy production expected to go online the following year.

During construction, the company plans to employ 200 to 300 workers, promoting job creation and hiring locally whenever possible, while continuing to generate indirect tax benefits throughout the area.

Armadillo Solar Center committed to pilot payments over the agreed years in exchange for the agreement.

Trustees also agreed on a tax abatement with Homeland Vinyl Products Inc. The company is considering a $3 million dollar investment on a 15-acre area located at 9001 Navarro Road.

The tax abatement would extend for five years at a 50% annual abatement rate. Homeland Vinyl Products, headquartered in Birmingham, Alabama, would create 25 jobs and retain an additional 25 jobs.

Trustees were updated on future leadership training opportunities as well as the results of a survey to further define the role of the Board. The trainings and survey are required to maintain accreditation with the Southern Association of Colleges and Schools Commission on Colleges.

Trustees were also updated on routine enrollment and personnel and financial reports. Findings of the audit conducted by Whitley Penn, LLC will be discussed at the Board’s December meeting.

Trustees also acted, nominating James Price to fill a vacancy on the Navarro County Central Appraisal District’s Board of Directors.

The College will be closed for Thanksgiving Break, Nov. 25 through 27. Although the dorms and dining areas will remain open for those students who will be on campus.