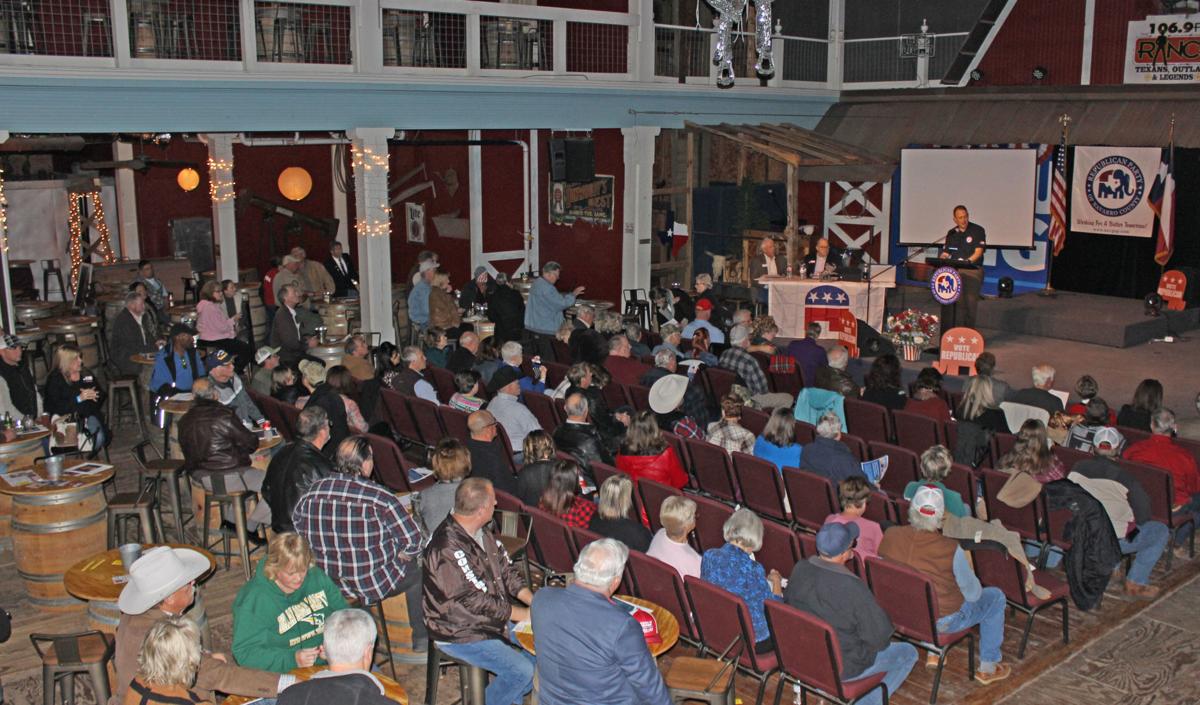 Meyers encouraged those in attendance to view the candidate forum as a job interview.

Questions were tailored to specific races. The candidates were each isolated while the other spoke. The forum’s moderators were Will Orr, Republican Chairman of Hill County, and Jon Ker, Chairman of the McLennan County Republicans.

Local candidates for District Attorney William “Will” Dixon and Will Thompson continued to spar over conviction rates and the number of dismissed cases in Navarro County since Dixon was appointed by Gov. Greg Abbott in March of 2019. Abbott has endorsed Dixon for re-election.

“When I took over the misdemeanor court was more than four years backed up,” Dixon said. “The whole reason I am a prosecutor is to see that justice is done.

“We couldn’t prove some of those cases because the evidence was no longer there,” he said.

Dixon said he is being “lambasted” by his opponent for dismissing some of those cases.

Dixon’s challenger, Will Thompson, said he was asked to run by individuals who are concerned about the number of cases dismissed without prosecution, though he said he feels called to do the job.

Thompson has received a number of endorsements, including the Corsicana Police Officer’s Association. He stated he’s not interested in inflating conviction statistics, but is concerned that prosecutors are losing more than they are winning.

Thompson said that although prosecutors have digression in some cases, the legislature makes the laws and said prosecutors follow those laws.

Navarro County Sheriff Elmer Tanner was the next to take the stage and ask people for their vote. Tanner, who has been in law enforcement for nearly 31 years, was elected Sheriff in 2012.

Tanner said he considers himself a hands on Sheriff who leads by example. Tanner is a Master Peace Officer in the state of Texas. He also holds a Master Correctional Officer certificate and an advanced tactical certificate. He said he considers the most pressing issue he will face is a 32 year-old facility. Tanner said keeping and maintaining his qualified staff will also be a priority.

“The correctional officers at that facility are the unsung heroes of Navarro County,” he said.

Tanner announced that during his tenure as Sheriff he’s stayed within the budget returning $4.3 million to taxpayers.

“Not only have I been fiscally responsible, we’ve improved or addressed areas within the department including training and equipment,” he said.

Foreman said that drugs are the number one issue Navarro County faces. He said he would also prioritize building relationships and improving the morale of the work force.

Foreman said he believes as a business owner he can cut the budget, which encompasses 60% of the entire Navarro County budget.

Matthews said his top priorities are road maintenance, trash collection and helping out small communities as best as he can.

Both Matthews and Moore agree that having a centralized road commissioner is a mixed bag.

Matthews said he would prioritize school bus routes when prioritizing road maintenance and attempt to keep county equipment longer and use it instead of contracting to other businesses to save the county money.

He said he would address economic development by improving the roads for agricultural businesses.

Eddie Moore is running for re-election and said his priorities are road maintenance and managing the budget. Moore said he and other commissioners keep a tight rein on the budget.

Moore said that infrastructure is important in economic development.

“If we build it they will come,” he said.

Candidate for Pct. 2 County Constable, Charles Paul, also addressed the crowd, touting his experience. He will face Roy Ivey in the Primary. Ivey did not attend Tuesday’s forum.

“Republicans have a good chance of taking back the House of Representatives, maintaining the majority in the Senate and re-electing President Donald Trump.

“We can do that, but only if Republicans get out and vote all the way down the ballot in November,” he said.

“The worst night of the year in Corsicana is better than any night in Washington D.C.,” he said.