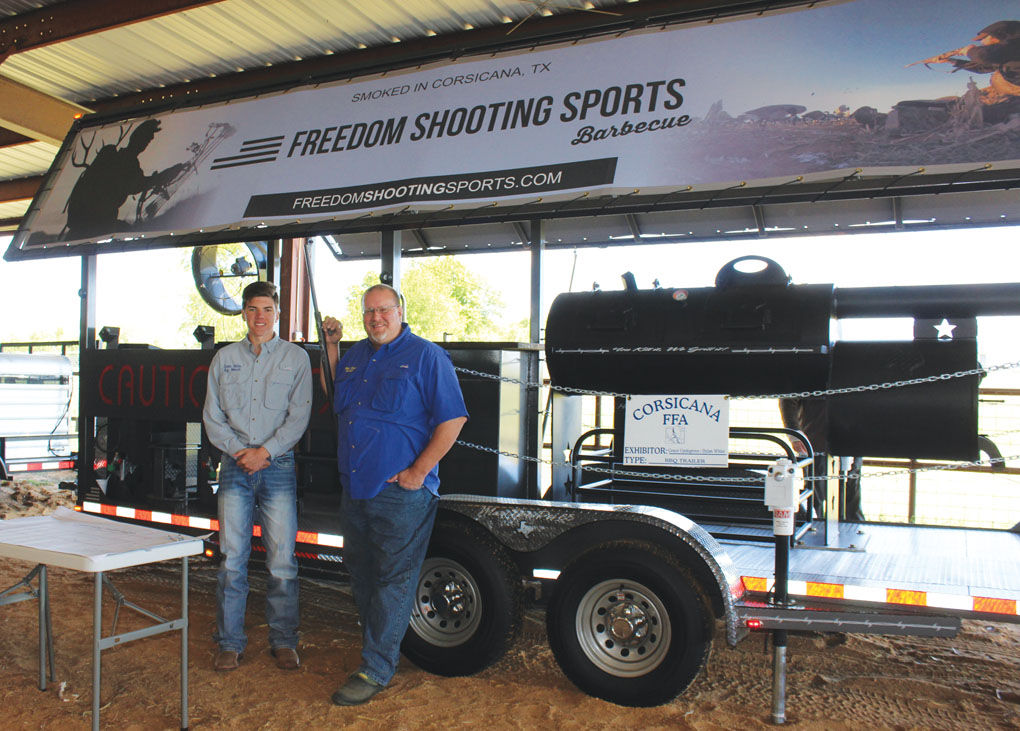 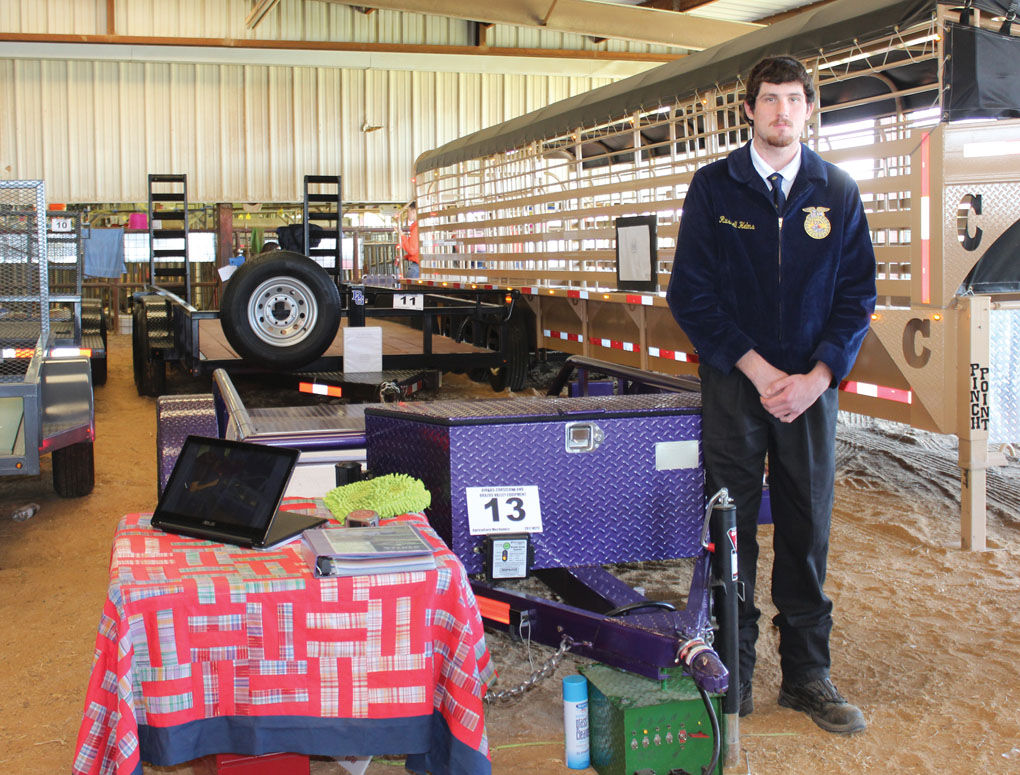 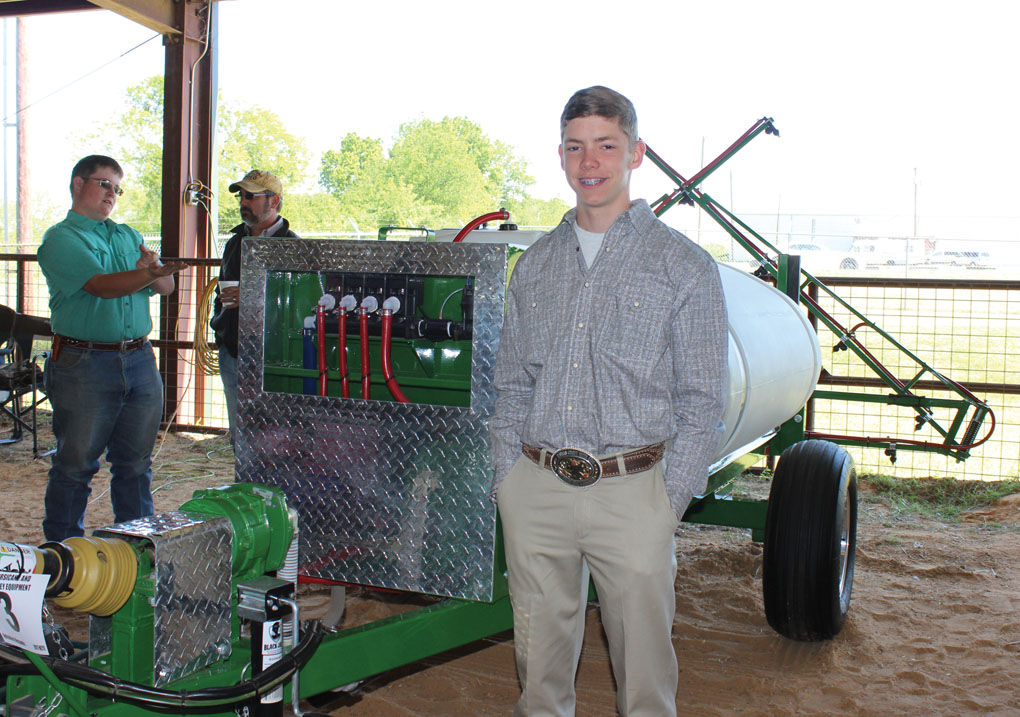 During a cold snap complete with gale force winds, the ag mechanics show began Wednesday at 9 a.m. Students stood by their projects, some in jackets, some shivering without jackets to cover their team shirts. Some students went without food and bathroom breaks, in order not to miss the judges when it came their turn to show.

The Grand Champion overall was Bobby Dunn III of Kerens FFA with his welding trailer.

Senior Showmanship was awarded to Russell Helms of Corsicana FFA for grand champion; and Christian Thornton of Blooming Grove/Barry 4-H for reserve champion.

Charles Prause, ag teacher in Bosqueville, served as judge for the event. This is his second year to serve.

Projects ranged in variety as well as in size, from the very small — barbecue grills, etc. — to the very large — a cow cooling trailing on wheels so it was portable.

The team of Collins Middle School FFA made up of Grant Harrison, Rudy Beck, Anthony Lara, Brody Hodge, Kadyn Collins and Kendall Gooden worked together to build the portable show calf cooler. They gave tours of the trailer all day, not only to the judges. The boys logged 475 working hours in their record book.

The all-girl team of Claire Plemons, Morgan Dawson and Cristen Hardwick employed blue paint to make their trailer stand out from the crowd.

“This is our first year of doing an actual welding project,” Claire said. “Morgan had one semester of welding prior to this, I had never welded, and Cristen had never seen a welder. We started on it in January and took it to show Feb. 15 in San Angelo, then Houston, and came back with blue ribbons from both.”

Claire said they plan on getting bigger from here, bigger projects and more of them. Casey Phillips and Laura Westfall are the girls’ ag teachers from Blooming Grove FFA.

Also from Blooming Grove FFA was the team of Jacob Eldridge, Justin Maldonado, Lawson Covington and Kaleb Esparza, who built a trailer with wooden floor, hay spike and hay fork.

“It is 25 feet, counting the tongue, and was built for someone in our community,” Justin said.

“It’s unique and we need it for our hay meadows,” Christian said when asked why a sprayer. “It is hypro pump, powder coated and has automatic valves. The booms are 25 feet wide, tips on 20 inch centers.”

“The son, who is helping with the business, is one of my former students,” said Ag teacher Mark Vitters. “Stuart Hillock helped a bit with design, but also gave the kids freedom.”

Vitters said the team of White and Updegrove won division at San Antonio, bringing home a $12,000 scholarship and $8,000 in prizes such as welders, helmets, tools, etc. The trailer has a huge smoker, sink, large cutting board, two 2-basket fryers made from scratch, six-foot countertop made of solid walnut, and a griddle.

Wilson Lupo, 11, of Agape 4-H made a portable chicken coop with a hanging feeder, waterer, and trap doors on the back for retrieving eggs. Wilson said you move it a few feet every two or three days, and give the chickens fresh grass, and it fertilizes at the same time.

Jansen Tyner of Dawson FFA made a bench from a water trough, because his mom found it on Pinterest. She will be using it following the contest.

First-time exhibitors Jacie Hamilton and Raquel Balderas built a lamb/goat stand for shearing. Jake Rogers and Tyler Dean of Agape 4-H made a hay grapple, which handles eight square bales of hay at a time. Jake and his dad will be using it on the ranch.

There were many other projects, trailers, barbecue pits, even a rabbit hutch.