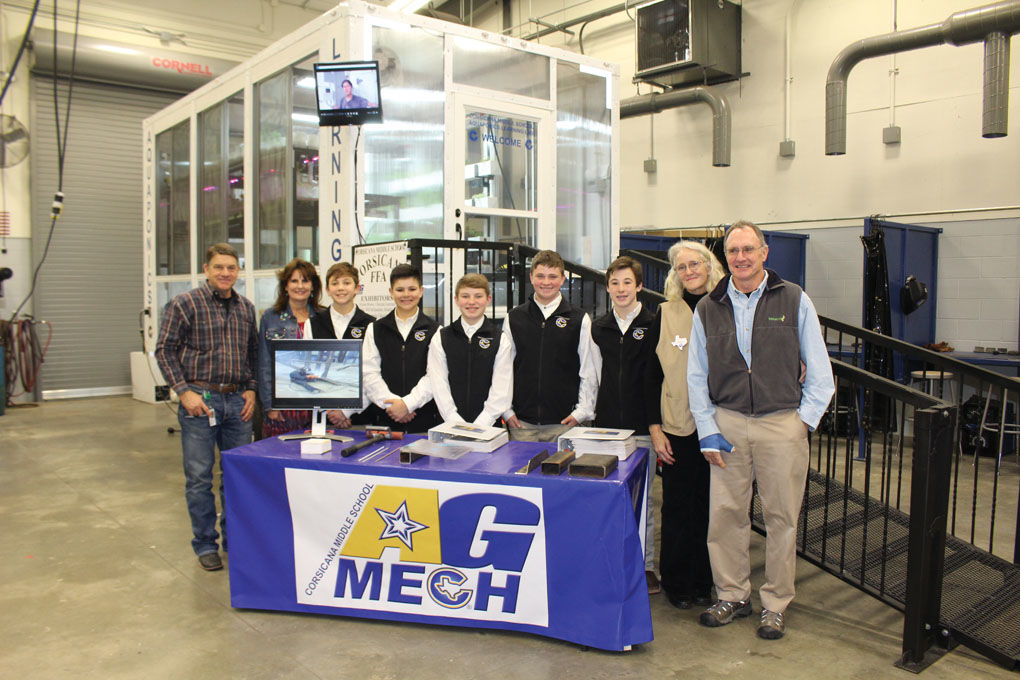 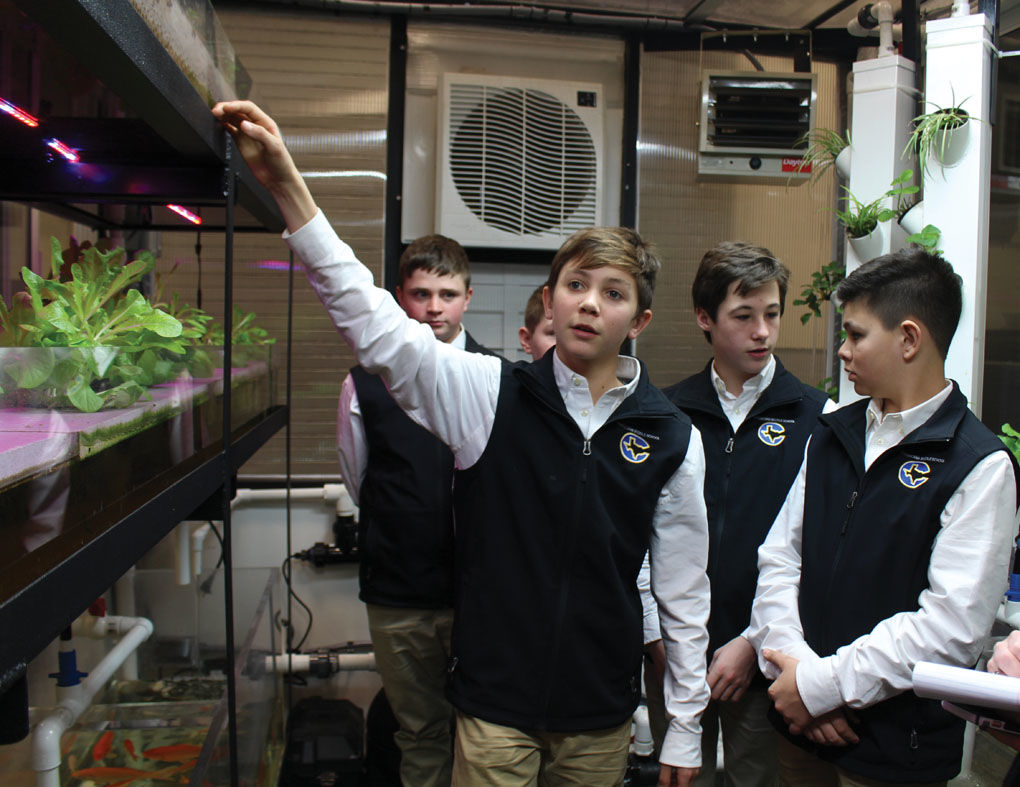 Daily Sun photo/Rob Ludwig The Eighth grade ag mechanics team from Corsicana Middle School Zane Petty explains the 'media bed' in the Aquaponics trailer they built for showing at stock shows. He is surrounded by the rest of the team, back, left to right, Christian Eastman, (barely seen) Bradley Gruver, Will McSpadden and Peyton Brown. 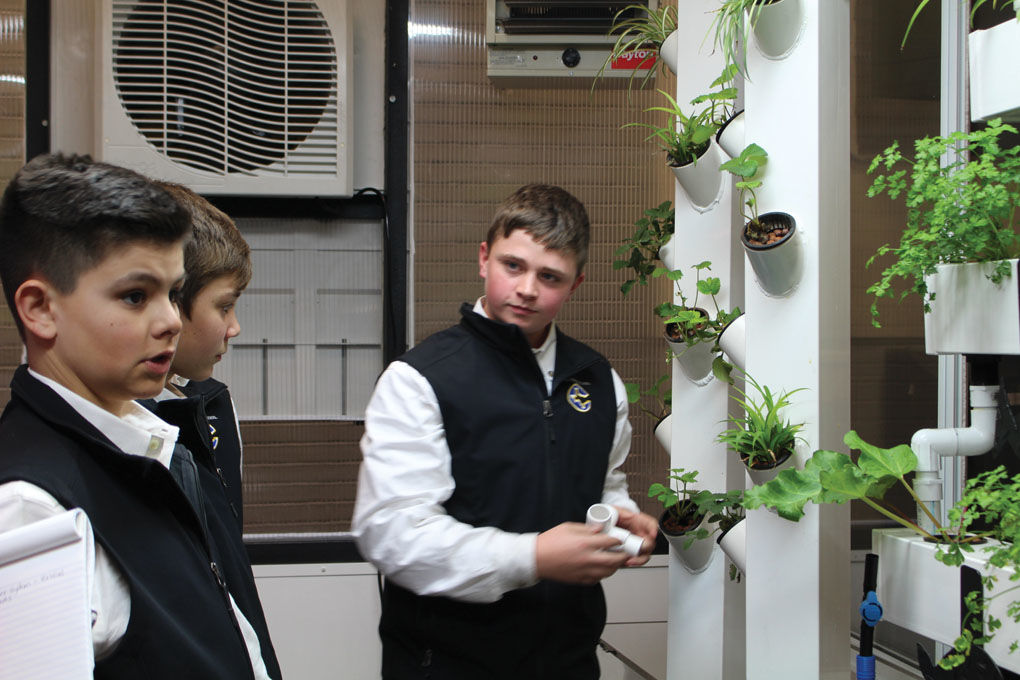 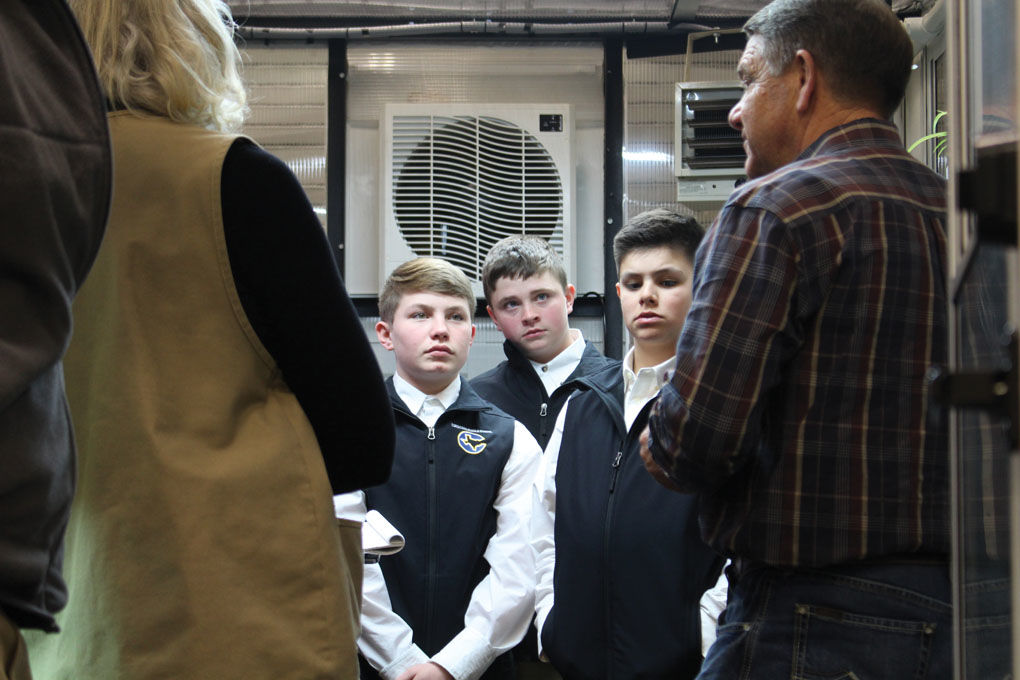 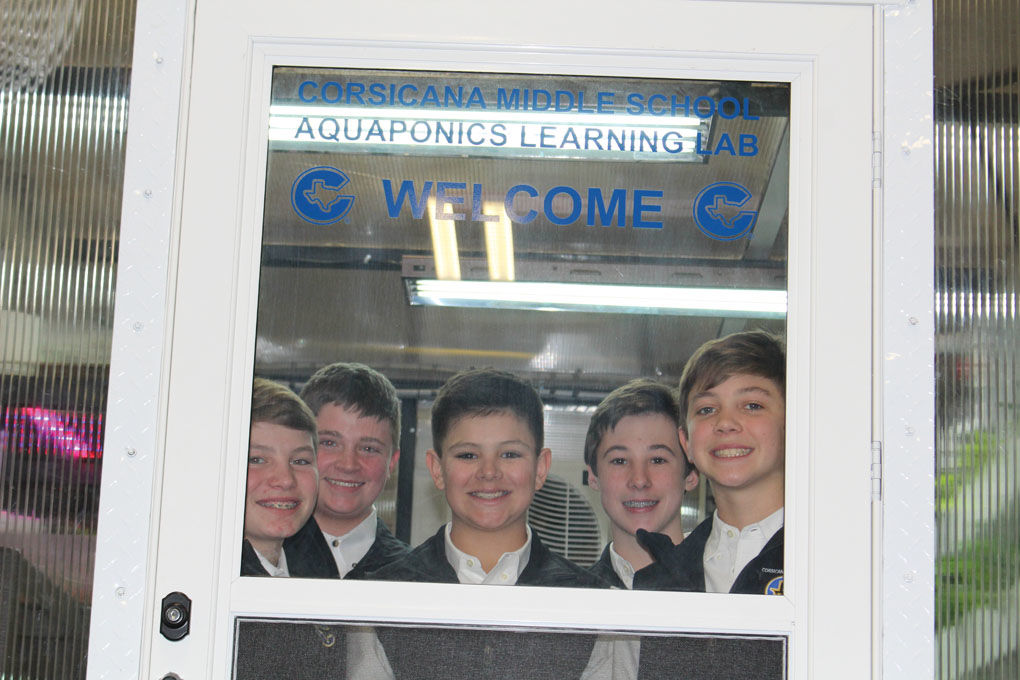 Daily Sun photo/Rob Ludwig The Eighth grade ag mechanics team from Corsicana Middle School Zane Petty explains the 'media bed' in the Aquaponics trailer they built for showing at stock shows. He is surrounded by the rest of the team, back, left to right, Christian Eastman, (barely seen) Bradley Gruver, Will McSpadden and Peyton Brown.

Out of the very humble beginnings of a tiny, dark, crowded ag mech shop at Collins Middle School, Larry Acock and his team of young eighth grade boys have emerged year after year with some very spectacular projects.

One year they did a handicapped-accessible deer stand with elevator for disabled veterans. Last year they made the first mobile calf cooler of its kind. And this year, they topped by constructing a mobile aquaponics lab.

“This is the beginning of what agriculture will look like in the future,” Acock said. “We lose thousands of acres of farmland every year. The research we started last year showed producers with aquaponic barns are supplying entire cities, restaurants, etc.

“This IS the future of agriculture.”

That belief was validated when Acock and the team of five young men — Peyton Brown, Christian Eastman, Bradley Gruver, Will McSpadden and Zane Petty — rolled into the Fort Worth Stock Show to compete in the ag mechanics division, and the people from Tarleton University asked Acock if they could bring it to their campus a couple of times a year to show it.

The team won its class at Fort Worth, then won its division, then was chosen as the grand champion project overall. They also took Reserve Grand Champion in Showmanship, and brought home $14,000 worth of prizes from that show alone.

Acock and his teams are well-known on the show circuit. During the 2017 show season, his team brought home over $36,000 in prizes, and made appearances on five different news channels.

The aquaponics lab, which has many, many components, truly became a community project, and came together with a little help from friends with different areas of expertise.

“I talked to people who are doing aquaponics,” Susan said. “I had not done it before, but I was curious. I added lots of stress for Larry!”

Dan, a chemical engineer who does a little plumbing, jumped on board to help the boys with that aspect of the project.

“We did a little more plumbing than would’ve have normally been done,” Dan said. “But we think it turned out well.”

On the upper level, the “media bed,” Gilliland says you can grow just about anything. The show team had several items growing in their media beds, including strawberries, cilantro, and herbs. The water and nutrients from the media beds trickle down into the “floating beds,” which are the middle layers. The floating beds in the trailer contain many different types of lettuces.

“They also took fence posts, and drilled holes in both, placing them both vertically and horizontally,” Susan said.

The bottom layer of tanks contain goldfish and crawfish. The entire eco-system works together to supply all the ingredients needed to make things grow.

But how well does it all travel? It is a mobile aquaponics lab, after all.

“We take the water and fish out and put in a 55-gallon barrel with an aerator pump on it,” Christian said. “We can do the complete setup in an hour.”

The boys said the type of fish they have in the lab thrive in cold water, and it’s a good thing.

“At first we were going to raise tilapia, but because the trailer isn’t stationary the temps can’t be totally controlled, and they don’t do well in cold water,” said Will. “When we got to Fort Worth, the barrel (with fish) has a flap on top, and it was frozen over — but the fish were OK.”

The boys can tell you anything about the aquaponics trailer and contents you want to know. Their presentation is a large part of what they are judged on, not just the project itself. And the keeping of a book/journal of the project in every stage of development is key to winning anything past your division, Acock said.

How many work hours did the team put into the project?

Christian said watching the team from last year inspired him to participate in the eighth grade ag mechanics program. When asked what they learned throughout the project, Zane replied, “How to speak.” Will said “determination.” Peyton said he learned to work hard and never give up.

“I don’t think any of us were too keen on the plant thing until we saw the plants growing,” Zane said.

“And when we put the water in, that was so cool,” Acock said.

Christian, who is a whiz with a plasma cutter, added little touches here and there like metal fish on the brackets which hold up the shelves, and outlines of fish on the ramp used to enter the trailer. Peyton and Zane did most of the painting, and Will said he did not weld on the project, but when someone did weld and the welds weren’t that good, he was right there to grind off the excess.

At some point through the process each boy and Mr. Acock all wanted to quit. They’d wake up in the night thinking about the trailer.

“As a Master Gardener, it was a perfect project to get involved in,” Susan said. “One chance to give back to the community. This had lots of rewards, and a big reward working with an exceptional teacher like Larry and all these young men.”

Acock said the boys have done a mind-blowing project, and they present it so well. Their next stop on the show circuit is the San Angelo Stock Show, which they’ll leave for Monday, after draining the fish and tanks and getting it “travel ready.”

“I’m not surprised at all it won overall Grand Champion,” Acock said. “And since federal funding for this program in the middle schools was cut a while back, our district chose to keep this program going.