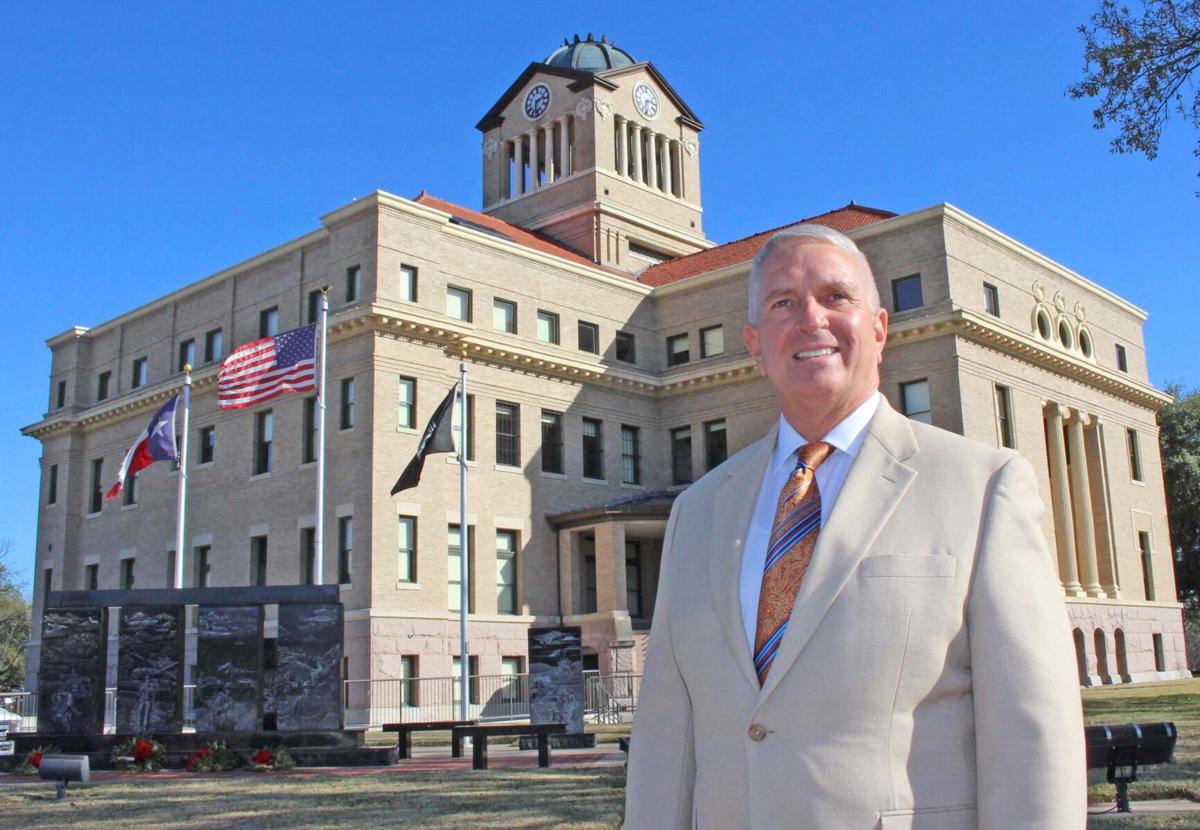 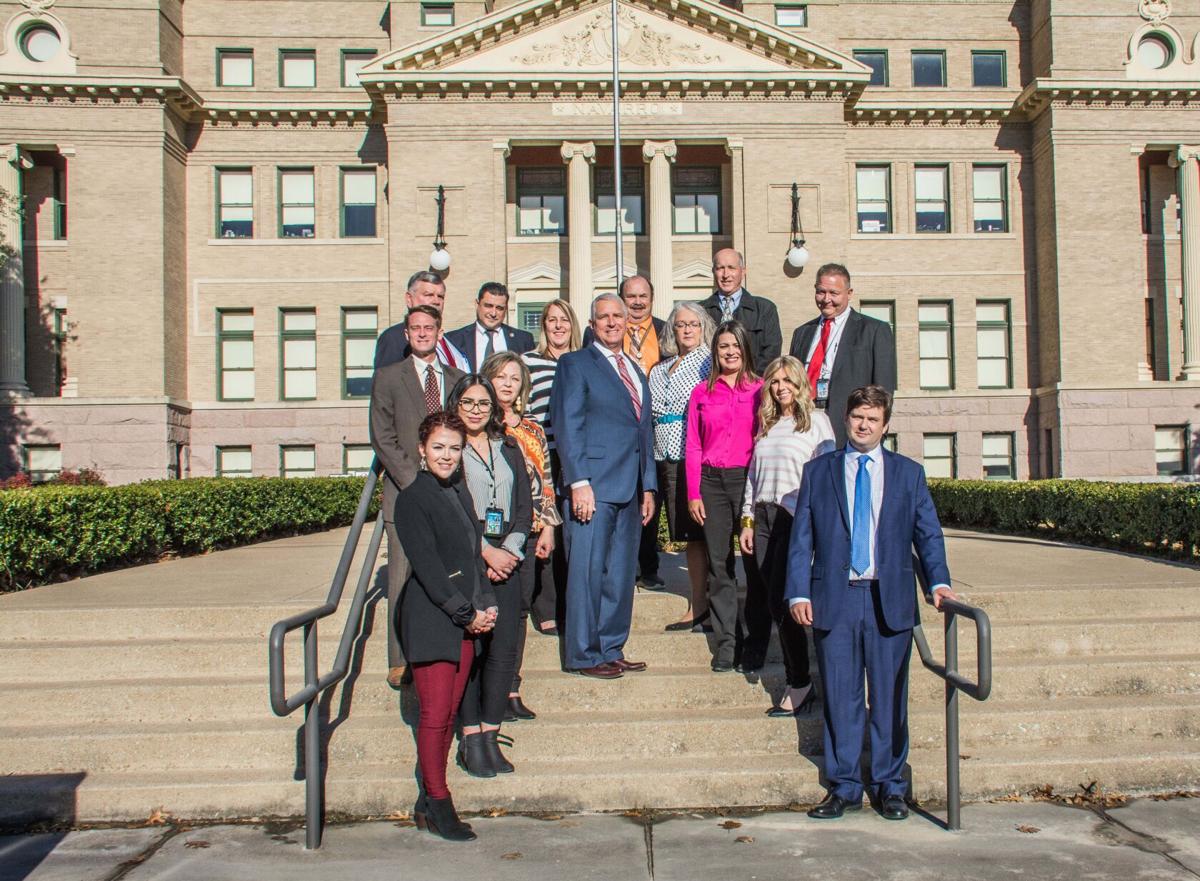 The Marine Corp veteran is tasked with prosecuting the biggest backlog in Navarro County history, with literally thousands of pending cases.

His journey so far has taken him all over the state, nation and world and he intends to apply his experience and lessons learned from those around him to his new position.

The Corsicana Daily Sun recently caught up with Thompson to learn about his history, qualifications and vision for the future.

What is your background?

My dad was an Army officer so I grew up around the world, the most interesting of which was Bangkok, Thailand.

I went to the University of Texas on a Marine Corp ROTC scholarship where I met my wife Mary, who is also a Marine. I graduated as a second lieutenant and served nine years as an officer.

We spent eight years in the San Marcos area and I worked in the investment business. My wife’s job drove us to the Dallas/Fort Worth area and Edward Jones found me an office there.

How did you get into law?

One of my college roommates and a couple of friends were studying law and I always said I would get into it given the opportunity. My second assignment in the Marine Corp was in Okinawa, Japan so I put it on hold. After we moved to DFW, I heard a radio ad one day that Texas Wesleyan University offered evening law classes, so I signed up. I worked full time running an Edward Jones office for two and a half years while attending law school.

How did you end up in Corsicana?

Former District Attorney R. Lowell Thompson hired me as an assistant district attorney the day I got my bar exam results back. I did every job in the DA’s office including juvenile, misdemeanor, civil and felony.

When Lowell passed away unexpectedly in 2018, I, as first assistant, became the interim DA. I was not eligible to be appointed as I was still commuting from Waco to support my wife’s job.

How did working with Lowell shape your philosophy?

First of all, I learned how to try cases. Under him, I tried over 100 cases to juries. Lowell’s strength lied in keeping people getting along with each other in a system that it is, by design, adversarial. He was frankly a lot better at it than I. Now, I come at it from a different perspective. He also taught me how to build great relationships with law enforcement, which has paid dividends since then. I got a real feel for what drives crime in Navarro County. Specifically repeat offenders.

What drives crime in Navarro County?

Law enforcement can tell you, 80 to 90% of our crime is driven by drugs. Not only property crimes, but we spend an enormous amount of time and resources on Child Protective Services Cases, almost all of which are driven by drugs.

What is the solution?

I have talked to the county judge and commissioners about instituting a separate drug court docket, which would include high intensity supervision, drug counseling and frequent drug testing with the goals of getting addicts, who frequently commit property crimes to support their habits, off of drugs by means other than sending them to prison.

The other side of that coin is being very vigorous on protecting people who are dealing drugs for profit. Those are the people who are driving up the crime rate and I don’t have any sympathy for anyone who would profit from selling methamphetamine to an addict.

If a repeat offender is driven by addiction, they may be a good candidate for drug court. However, repeatedly sending violent offenders through the process ceases to be compassion and becomes naive.

What is the ultimate goal?

The ultimate goal is to keep people from committing another crime, so the question is how far do we need to go to give us a reasonable assurance that an individual will not come back into the criminal justice system. If the cause is drug addiction, they will keep coming back until we solve the problem. We have limited tools but we must apply these tools in intense ways. We have no tools to rehabilitate people from selling drugs except to get them locked up as long as we can.

How to you plan to address the backlog of cases?

We have limited resources, so we can’t go trial on every case. My predecessor greatly expanded the use of pre-trial diversions, which is basically an agreement between the prosecutor's office and the defendant that if they complete certain programs or tasks and don’t get into trouble for six to 12 months then we dismiss the charge. It’s appealing to low-level defenders. It put the case behind them without a record and moves a lot of cases quickly.

We will have to be very selective in the cases that need to be vigorously prosecuted and realize those take up a lot of resources. We have a responsibility to the citizens however, to prosecute the drug dealers and habitual offenders. The other priority are the egregious victim crimes, such as murders or child molestation. There its no so much the history of the defendant but the nature of the crime. We have to do what it take to bring justice to those cases.

What is the expectation moving ahead?

Previously, each of the two felony courts were doing about one jury trial a month. Once we get beyond COVID, we will talk about if we can do more than that to catch up. Options such as bringing in visiting judges cost money. I don’t expect we will see any jury trails before the second quarter of this year due to COVID restrictions.

I am very happy I have been able to recruit a couple of attorneys who have been prating law in Texas for over 30 years each. All of attorneys have at least two years experience. All my paralegals are certified or have worked in private practice or in the courthouse.

What is your first order of business?

Getting the new attorneys up to speed on the major pending cases likely to go to trial. Fortunately, it looks like we will have a couple of months to do that, but crimes keep happening all the time.

I also aim to rebuild relationships between my office and our local law enforcement agencies.

What is a District Attorney?

The district attorney analyzes and gathers evidence to determine if there are grounds for criminal prosecution of cases within their districts and presents cases at trial.

What Does a District Attorney Do in Texas?

A district attorney in Texas has the following duties:

Works with law enforcement officers in the investigation of criminal cases

Presents cases to the grand jury