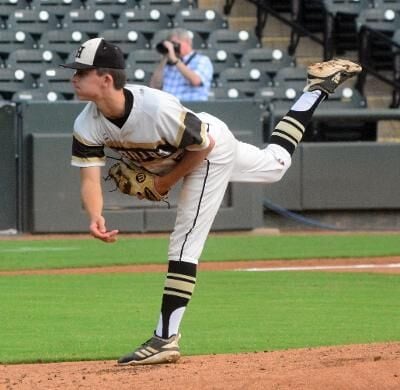 Shelby Noppeney was outstanding, allowing one earned run on four hits while striking out 10 in the Class A state semifinals against Kennard. He reached base all three times with two walks and a sharp single and also stole a base. 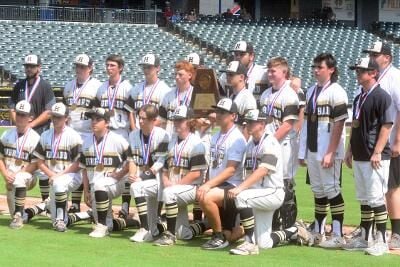 Hubbard's Jags, the first boys team from Hubbard to reach the state tournament in any sport, pose for a photo with their state semifinalist trophy after playing Kennard. 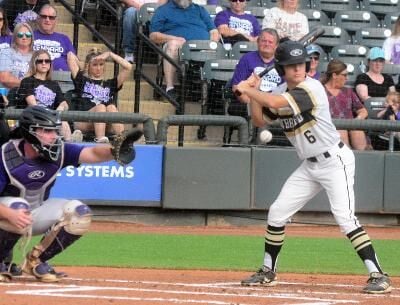 Shelby Noppeney not only pitched a gem, but he was on base three times with two walks and a hard single. 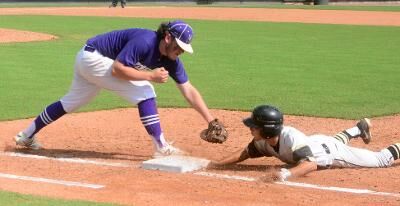 Hubbard's JJ Johnson slides safely back into first against Kennard in the state semifinals. Johnson was one of four Jags named to the 16-2A All-District first-team.  He pitched and played shortstop and hit .432 while leading the Jags with 40 stolen bases and 53 runs in 36 games. 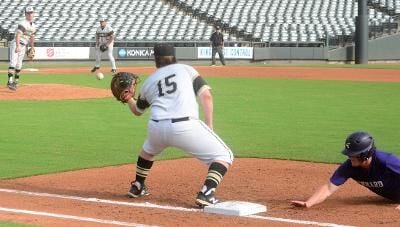 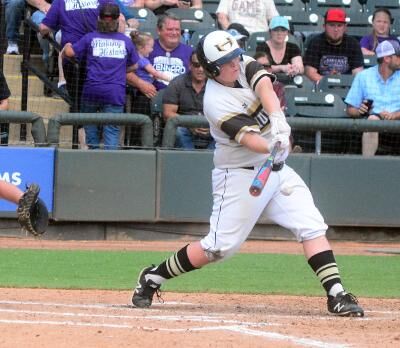 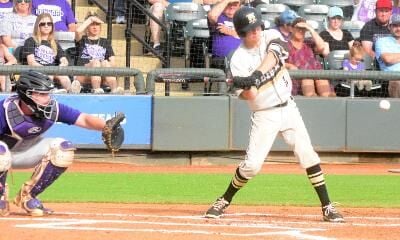 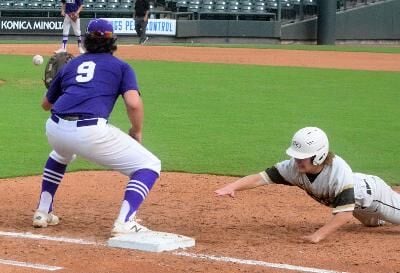 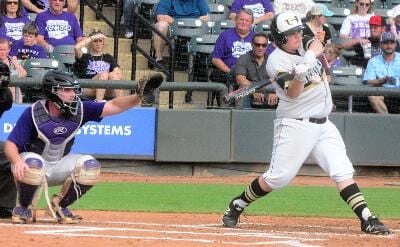 Shelby Noppeney was outstanding, allowing one earned run on four hits while striking out 10 in the Class A state semifinals against Kennard. He reached base all three times with two walks and a sharp single and also stole a base.

Hubbard's Jags, the first boys team from Hubbard to reach the state tournament in any sport, pose for a photo with their state semifinalist trophy after playing Kennard.

Shelby Noppeney not only pitched a gem, but he was on base three times with two walks and a hard single.

Hubbard's JJ Johnson slides safely back into first against Kennard in the state semifinals. Johnson was one of four Jags named to the 16-2A All-District first-team.  He pitched and played shortstop and hit .432 while leading the Jags with 40 stolen bases and 53 runs in 36 games.

It ended in heartache and controversy in a bitter 3-1 loss to Kennard in the Class A state semifinals at Dell Diamond, where a large and loud crowd from Hubbard made the 240-mile round trip to see their Jags walk off the field one last time.

It was a long journey, but not for the friends, family and fans of the Jags because these coaches and kids didn't just have a remarkable and sensational season, they had a journey for the ages.

"I'm super proud of them," said Hubbard baseball coach Jordan Grimm, who told his kids after the game that "the best team doesn't always win," and that "strange things happen in baseball."

Grimm has done an amazing job coaching this team, a close-knit group that literally changed the course of the season by demanding more of themselves.

The Jags, who finished the season at 25-10, were 9-8 after a tough loss to Wortham in a game where they didn't play well. Grimm said the next day that his kids got together and got onto each other and vowed to work harder and play better.

"We had the best practice of the year the next day," Grimm said. "And we started playing better."

They just didn't play better. The Jags ended the regular season with an eight-game winning streak. And that was just the beginning. They made it to the postseason and just kept winning, moving through the pressure-packed playoffs with sweeps in the bi-district round, the Area round and the Region Semifinals to stretch the streak to 14-0. Then they met Dodd City, the No. 1-ranked Class A team in Texas and a team that made it to state in 2019.

Hubbard won the first game of the best-of-three Region Finals 2-1, lost the next afternoon 10-0, but bounced back to win the series with a 1-0 victory that sent the team to Round Rock. That's the group that arrived at Dell Diamond after winning 16 of 17 games.

"These kids are great. They are so gritty, just a hard-working bunch of kids," Grimm said. "They come to work every day. That's what's great about Hubbard kids. They're tough and gritty."

It took a lot of tough and a whole lot of gritty to swallow this loss.

Most -- if not all -- of the Hubbard crowd left Dell Diamond shaking their heads in confusion after a bizarre play in the bottom of the sixth (with no explanation over the PA system). The play had just about everyone in the stadium wondering what had just happened.

With the score tied at 1-1 in the bottom of the sixth and Dylan Cole on second and one out and a 2-0 count on Kennard catcher Jacob Cato, Hubbard pitcher Shelby Noppeney missed with a pitch to run the count to 3-0 as Cole took off trying to steal third.

Hubbard catcher Blaine Cornelius, who has a strong arm, jumped up and tried to throw Cole out. The ball never got to third. Cornelius' throw hit Cato, who was standing in front of him, in the head. The ball fell to the ground and Cato raced off the field in pain seeking help after being hit.

Cole was ruled safe at third, which prompted Grimm to come out of the dugout to argue the call. His logic was simple. "The rule says the batter has to attempt to get out of the way," Grimm said later.

Grimm argued intensely to no avail. What seemed to be a clear case of obstruction wasn't called and the play went against Hubbard.

Grimm isn't blaming the loss on the call. He said later his team didn't play its best baseball and mistakes and errors were costly. But no one can say one way or another that the call didn't effect the game and the tenuous situation it put Hubbard in because it was late in a tense and tied game and if Cato had been called out for obstruction there would have been a man (Cole) on second with two outs instead of runners at first and third with one out.

Grimm, who was trying to save pitches for Noppeney, who was masterful but was nearing his pitch limit, waved to home to intentionally walk Cato, who stayed in the game.

No one in the crowd understood why Cato was awarded first base, making the situation even more bizarre.

Now, with runners at first and third with one out, Cato stole second, and Caleb Alfred, who had struck out twice, singled to drive in two runs.

The final was 3-1. Noppeney allowed an unearned run in the first when Keyton Lumbreraz hit a sinking liner down the right field line that was just fair. The throw back to the infield got away and Lumbreraz scored on a triple and an error.

Noppeney struck out Cole, walked the next two Tigers and then ended the inning with a strikeout -- and then took over after giving up the unearned run. He retired 11 in a row (with six Ks) before two errors put runners at first and second in the fifth. He kept the score at 1-1 by getting a pop-out to second and striking out Lumbreraz on three pitches to end the fifth.

It was still 1-1 when Cole stole third without a throw.

"Shelby was great. He pitched his tail off today," Grimm said. "I couldn't be prouder of him."

That was nothing new for Noppeney, a junior who will be the ace of the staff next year. He had given up just one run on the 10-game playoff march to Round Rock before facing Kennard.

He finished the game allowing just one earned run on four hits while striking out 10 over six innings.

The Jags scored in the fourth against Cole, who was also lights out on the mound after a wild start. His first pitch of the game was right out of the Bull Durham movie -- a wild and high pitch that sailed 10-feet over everything. His second pitch was just as wild, bouncing in short of the plate and sailing past Cato.

But that is almost to be expected in games involving small schools at state because kids are incredibly nervous in the big stadium atmosphere while pitching the biggest game of their life. Cole settled down and allowed just one run on four hits while striking out seven over 6 2/3 innings before leaving after he reached the 110-pitch count.

The Jags got on the board in the fourth when Noppeney walked on four pitches with two outs and reached second on an error on a pickoff throw. Sebastian Olvera brought him home with an RBI single on a ball that was hit deep in the hole at short. Olvera, who is 6-8 and weighs over 300 pounds, flew down the line to beat the throw to first in what was one more example of just how gritty and no-quit this Hubbard team is -- these kids (and they play every sport) left their mark on the school and the athletic program and probably should have a trophy case all their own.

The Jags had a chance in the fifth when JJ Johnson, the team's fastest and best baserunner, hit a sharp single to left to open the inning. Cornelius then attempted to move Johnson over with a bunt, but Cato made a big play and threw out Johnson at second. Johnson, rounded second and when he looked up the Kennard shortstop was right there. Johnson slammed into him. It was unintentional.

"He wasn't trying to break up the play," Grimm said later. "We're very aggressive on the base path and our kids are alert. If we see the third baseman coming in to field a bunt and the runner sees there's no one covering third our kids know to try to go to third on a bunt play like that. That's what JJ was doing."

The second base umpire didn't care. He call Johnson out on the play at second and also called Cornelius out at first because Johnson obstructed the shortstop when he knocked him down. Baseball is also a game full of irony.

Noppeney followed with a hard single that would have put runners at first and third with one out in a 1-1 game. Noppeney then stole second but Cole escaped with a strikeout to end the inning.

"That play bothered me even more than the call (on Cato obstructing in the sixth)," Grimm said of the double play being called in sixth on Johnson and Cornelius. "But we just didn't play our best baseball, too many errors, too many mistakes. But I am so proud of them.''