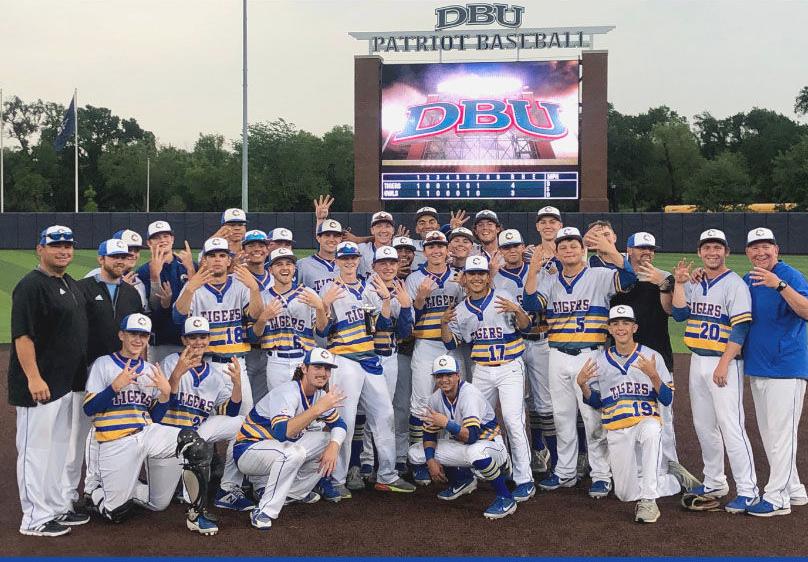 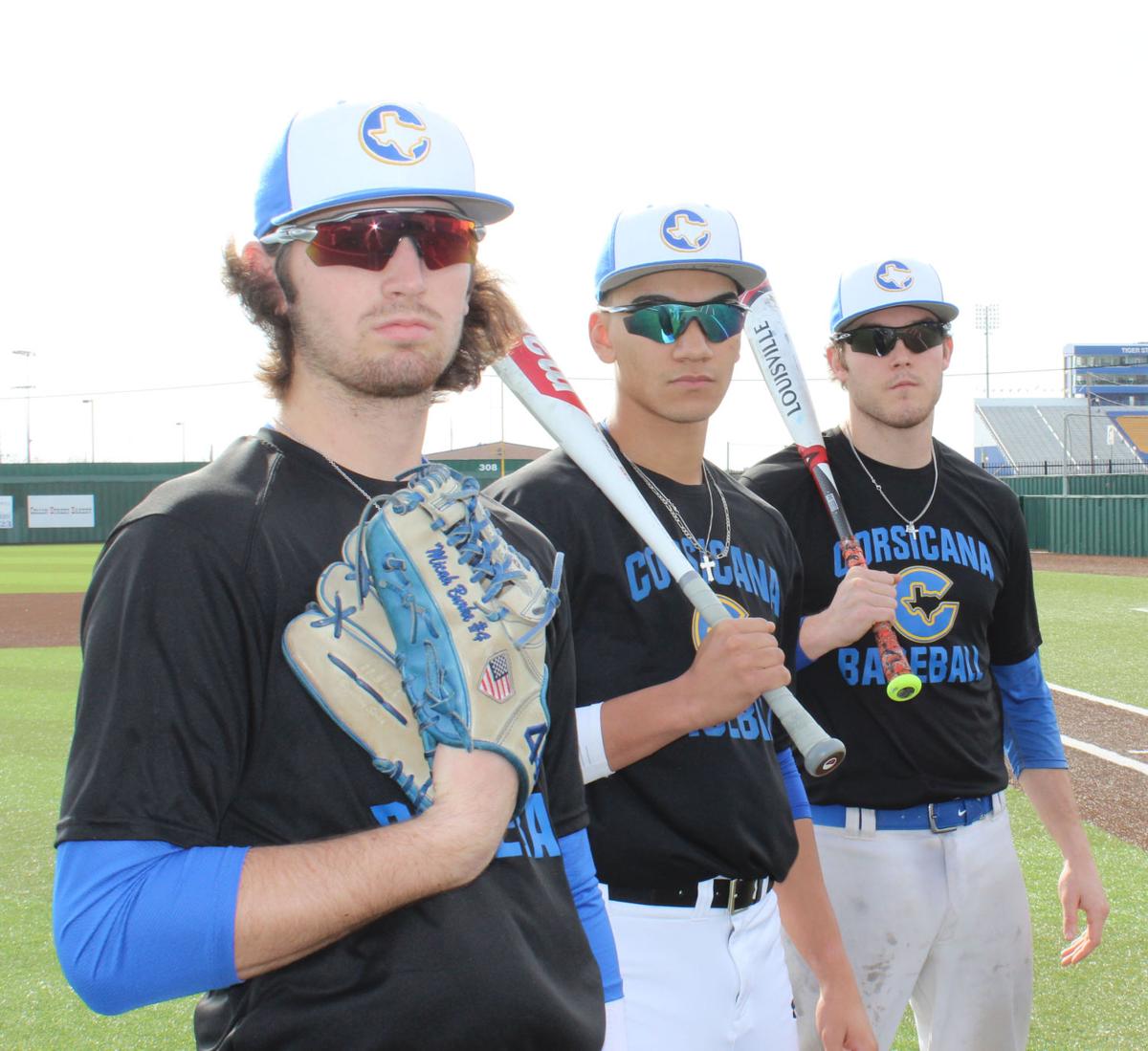 From left are Tiger seniors Micah Burke, Devan Lindsey and Ty Nolen, who all came up big Saturday to help the Tigers beat Lone Star 3-1 and advance to the 5A Region II Championship series against Midlothian,

From left are Tiger seniors Micah Burke, Devan Lindsey and Ty Nolen, who all came up big Saturday to help the Tigers beat Lone Star 3-1 and advance to the 5A Region II Championship series against Midlothian,

They had just beaten Frisco Lone Star 3-1 in the 5A Region II Semifinals to stay alive in the Texas high school baseball playoffs, and now they were going bananas, and embracing each other and the moment.

No one wanted to let go.

There they were, right there in right field, just beyond the infield, just beyond the horizon. That's where Corsicana's Tigers floated right into history, joining a Tigers team from another lifetime -- make that a few lifetimes ago -- Saturday as they danced and shouted and hugged and screamed and hugged some more on the diamond at Dallas Baptist University, where these kids, these history making kids, became the first Tiger baseball team to get this far in the playoffs since 1958.

Elvis had left the building, but Heath Autrey's kids will be back next week at  DBU to play Midlothian for the 5A Region II Championship, just one step away from the state tournament.

The last group of Tigers to get this far in the playoffs were the 1958 kids, the only Tiger team to play for a state baseball title.

Yup, this is some rare company and rarefied air these Tigers are walking on, but oh how they belong. They marched here, one gritty step at a time, with a run through the playoffs no one associated with this team will forget -- a memorable and magical run that saw these kids pick themselves off the floor time and time again to keep the dream alive.

Just look at this three-game series they won from Lone Star, a team that ironically had far more than one star, a team loaded with talent that won 33 games this year.

The Rangers threw their Division I ace, Ryan Bogusz, against the Tigers not once but twice and had Corsicana on the ropes in Game 1 before the Tigers shocked Frisco with a seven-run inning to come back and win 10-4.

But no one bounces back after a tough loss like the kids from Navarro County. Lone Star won Game 2 with Bogusz on the mound in a 13-0 five-inning mercy-rule victory that would have shattered the confidence of any team.

Let's face it, you know that after that loss no one in Texas north of Colin Street gave the Corsicana kids a chance when they showed up for Game 3 Saturday morning.

But there they were, dancing in right field while the Lone Star kids left the diamond in disbelief. The same Rangers who scored 13 runs in five innings in Game 2, didn't score their only run until the bottom of the sixth, long after Corsicana had built a 3-0 lead in the biggest game of the year.

And the pitcher who stopped them was Devan Lindsey, who hadn't started a game since March 9. Lindsey has been lights out in relief, and one of the biggest bats in the lineup all year, and especially in the playoffs, but the fact is he hadn't started in forever.

But -- after graduating Friday night -- Lindsey came home early, woke up even earlier and took the ball and the Tigers' season in his hands and slammed the door on Lone Star.

He not only shut the Rangers out over four innings, but he all but knocked them out with a towering drive to left in the third inning. He had already  belted two homers in the playoffs, including one over that same tall left field wall at DBU last week to ignite the Tigers' comeback over Joshua in Game 3 last Saturday.

Lindsey's shot in the third inning against Lone Star looked like a homer all the way until it grazed the very top of the wall, missing a dinger by inches. But it was good enough for a double that drove home a 3-0 lead.

The Tigers scored a run in the second when Ty Nolen ripped a leadoff single to center and came flying home when Blake Hoffman crushed a triple over the outfielder's head in center as the two seniors combined to get the Tigers on the board. It could have been worse for Lone Star.

Lane Fuentes, who had another Gold Glove day at shortstop and who was at the heart of the Tigers' three double plays that ended the third, fourth and fifth innings, laced a liner right at Lone Star third baseman Austin Eaton for the third out.

The Tigers kept coming, and senior Micah Burke, who has been on fire at the plate during this playoff run (he's hitting .516, going 16-for-31), led off the third with a double down the line, and scored when sophomore Hunter Autrey, who leads the team in RBIs, delivered again with a clutch run-scoring single. J.D. Vega came in as a courtesy runner for Autrey and scored easily on Lindsey's near home run to make it 3-0.

Lone Star was living a charmed life, because Hoffman, the quarterback who rushed for more than 3,000 yards in his career and the fastest kid on the diamond, held up at third, and Fuente's liner was right at Eaton. Lindsey's drive missed being a two-run homer by inches.

It could have easily been 5-0.

That would have made life easier for the Tigers in the seventh when they were hanging on to a 3-1 lead, and Lone Star loaded the bases against Kolby Kinkade.

Kinkade, a sophomore, has been.nothing short of spectacular in the playoffs, but he had a nightmare start in Game 2 on a windy day and was the pitcher of record, going two innings in the 13-0 loss.

Coach Autrey got Kinkade off the mound after 63 pitches, knowing the Tigers would need every pitch (he had 47 left) Kinkade had left for Game 3.

Kinkade entered the game with a runner at first and no outs in the fifth and left after throwing his 47th pitch with two outs and the bases loaded in the bottom of the seventh.

Autrey went to freshman Miguel "Mikie" Luevano, who hasn't pitched much this year (16 innings). But Luevano threw four shutout innings at Lone Star to close out Game 1 for Burke on Wednesday.

He needed one out.

He got it when Dylan Clark hit a 3-2 fastball that went spinning toward Nolen at first, and Nolen, a four-year starter who has been a rock to lean on for this team, made the play and shoved the ball to Luevano, who darted to cover the bag.

The party started there and quickly snowballed with Tigers storming onto the field in a wild and wonderful celebration that spilled over into right field just beyond where Luevano had played second base.

The Tigers (27-10) will play Midlothian (23-10), a District 14-5A rival they split two games with during the regular season, at DBU in the 5A Region II Championship series