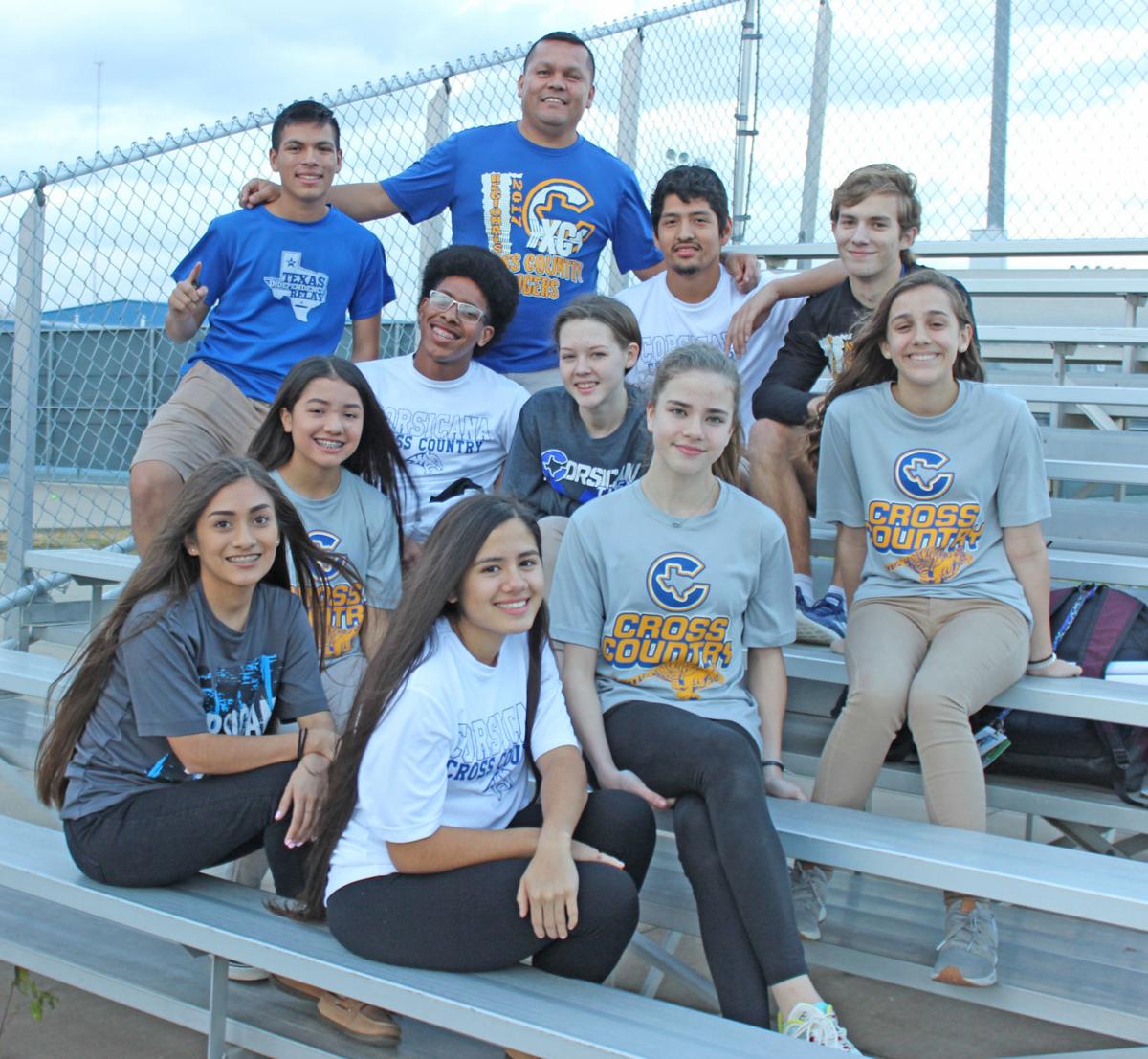 Corsicana cross country coach Jesus Rodriguez (top center) and some of his best cross country runners hang out in the bleachers after talking about how far the program has come since Rodriguez took over four years ago. 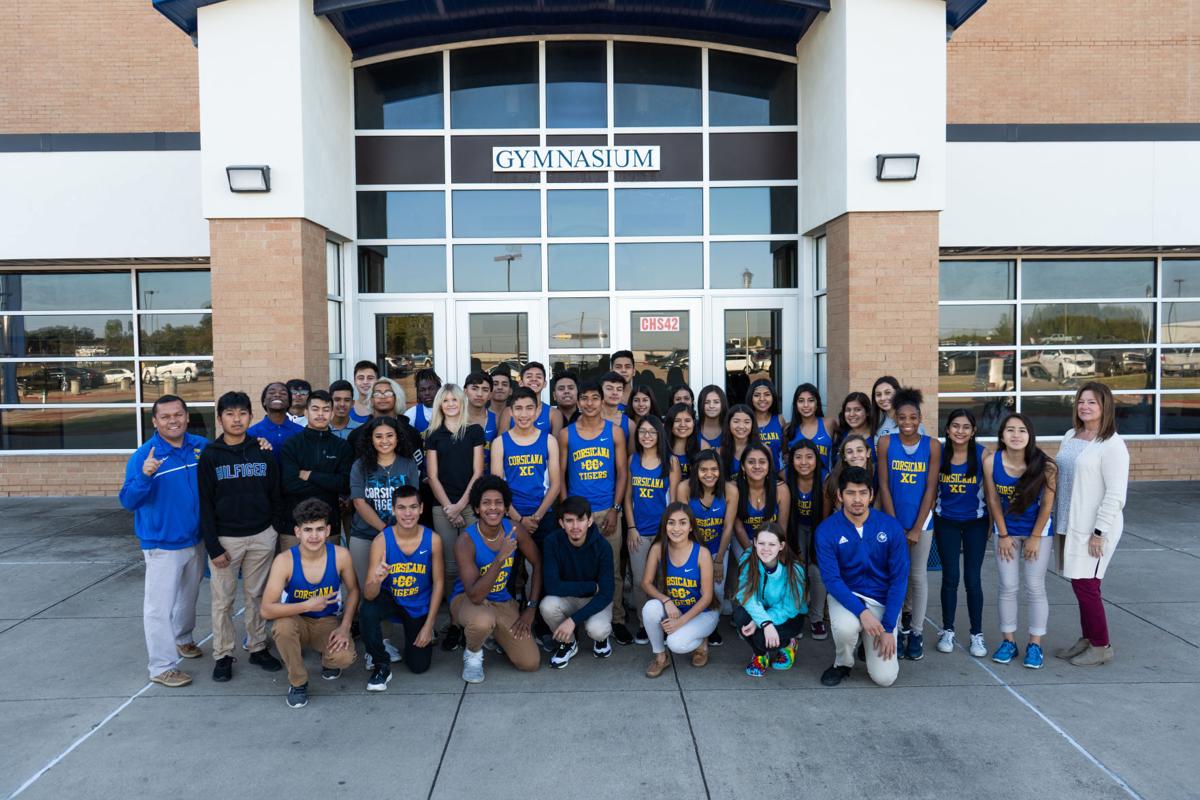 Corsicana cross country coach Jesus Rodriguez (far left holding up the No. 1 sign) poses for photo with his kids in front of the Tiger Gym. Rodriguez started with just eight runners four years ago and now has about 50 in his program.

Corsicana cross country coach Jesus Rodriguez (top center) and some of his best cross country runners hang out in the bleachers after talking about how far the program has come since Rodriguez took over four years ago.

Corsicana cross country coach Jesus Rodriguez (far left holding up the No. 1 sign) poses for photo with his kids in front of the Tiger Gym. Rodriguez started with just eight runners four years ago and now has about 50 in his program.

Cross country is all about the long run, but at Corsicana High School Jesus Rodriguez and his kids in the program have given the term a whole new meaning.

“When I first got here this was a lonely, lonely team,” jokes senior Gerardo Delgadillo, who showed up to run for Rodriguez’s cross country team three years ago without even knowing what the sport was all about.

“I had never heard of cross country,” Delgadillo said.

It was lonely in the beginning, but that’s the beauty of Rodriguez’s story and why this team and this program means so much to him.

“It has been a long journey,” Rodriguez said. “A long journey that started four years ago when I took over the head coach position as the Corsicana cross country coach. We had eight kids when I started, and I had to search for kids to have a team.”

Rodriguez literally went out and found runners and convinced them to go the distance.

He was also the assistant coach for the boys soccer team, and told his soccer players they should run on the cross country team to get into shape for soccer season.

“I knew I had to have seven runners to have a team,” he said.

Rodriguez ran them down that first year and then his kids starting running down other teams.

“Somehow we qualified for regionals that first year,” Rodriguez said. “Corsicana had never qualified before as a team.”

The Tigers, who shocked everyone in the district by taking home second place, have been in the regional meet since.

Both the boys and girls teams have improved in numbers (Rodriguez ended up with 20 runners that first year) and improved their times. Now everyone in the program routinely drops their times.

Jesus Arellano, a senior who ran as a freshman four years ago, was one of the building blocks for the boys team.

He finished off a stellar career this fall and then ran through his own personal wall with a breakthrough performance when he took first-place in the Fort Worth half marathon, beating more than 400 runners last month with a time of 1:22.10 for the 13.1 mile race.

It was Arellano who recruited Delgadillo three years ago. He knew Delgadillo was a distance runner on the track team (1600 meters) and approached him about joining the cross country team.

“When he asked me about it, I asked him ‘What is cross country,’” Delgadillo said.

Arellano and Jesus Sanchez, who was third in the district meet this year in 17:12, were the Tigers’ top two runners this season.

Arellano (17:14), Jarrell Jennings (17: 17) and Sanchez all ran PRs (personal records) at the district meet to lead the boys team to a second-place finish.

While Arellano was growing in the boys program, the Cervantes sisters were the heart and soul of the girls program.

Elizabeth Cervantes, took home second in the district four years ago as a sophomore, and had a brilliant career for the girls team -- and her younger sister, Sandra, is the Queen of Corsicana girls cross country.

Sandra finished third in the district four years ago right behind Elizabeth, and then won the district title the next season as a sophomore.

She struggled with some injuries this season as a senior, but still ran well and was the leader of Corsicana’s young girls team that took fourth place in the district meet and qualified for regionals.

“Sandra is the one we look up to,” said freshman Michala Banks, who led the team at district and in the region meet this season.

Banks, who ran in eighth grade, had no idea she could drop her times the way she did this season, going from more than 28 minutes to running a 21:04 this season. She finished 10th in the district meet to lead the girls to the region.

Cervantes set the tone and the standard, and now Corsicana’s youth movement is in place to make even greater strides.

Cervantes was the only senior on the girls top seven this season. Banks is a freshman, Illisas Flores (21:32 at district) and Leslie Garcia (23:22) are juniors, Jacqueline Rodriguez (23:35) is a sophomore and Anna Dixon (23:44) is a freshman.

Every girl saw her times drop dramatically this season.

“”I think we are just going to keep getting faster and faster as we go into the future, because of the speed we have now,” said Flores. “Everyone got faster this year.”

In the beginning, coach Rodriguez had to push everyone and everything to build a program, and he is still right there -- literally -- always pushing, always encouraging his kids.

“He runs with us,” Arellano said.

Rodriguez is a marathon runner, who competes in big races himself, but his passion and love for his program busts out everywhere. He almost had a runner disqualified in a race once for running alongside her to cheer her on during the race.

He started pushing his kids four years ago, setting up morning practices at 6 a.m. that are still a big part of the program. He’s creative and enthusiastic every step of the way, and the kids see it and react to their coach’s passion. It’s a big part of what drives them and the program.

Rodriguez even has the Dawson Run. That’s right, he and his kids run from Dawson to Corsicana High right along Highway 31. Arellano and Rodriguez began the tradition together, and Arellano will tell you right away that his coach has been there — right by his side literally on the Dawson run and beyond, and figuratively all four years he has been running at Corsicana.

Rodriguez’s standards and goals are high and everyone is running more than 55 miles a week, but his personality and drive makes everyone want to work harder.

“He’s a great coach,” said. Andy Grantham, a junior on the boys team. “He sets reasonable goals for us.”

Rodriguez has been in it for the long run since Day 1, and started his kids with morning workouts from the beginning.

“We had 20 runners that year and we had never been to the regionals in the high school’s history,” he said. “I knew it was a big challenge that would take hard work and dedication at every morning practice to even have a chance to qualify for the regionals. That year our team worked hard and ran six-to-seven miles every morning and also did lots of speed workouts.

“We surprised our district that year to take second place, and the following years were no exception, winning a spot at the district meet every year. We won the Ponder Invitational in 2018 and the Jacksonville Indian Invitational in 2019, and we went from 20th place in the regional meet in 2016 to 11th in our 2019 regional meet against some of the toughest teams in the state.”

All the numbers the Corsicana kids have produced, from competitive times to finishing at or near the top of the district for four years running, are impressive, but none more so than the growth Rodriguez has fostered.

Consider this: He started out with eight runners and now has almost 50 in the program.

That’s Corsicana’s version of being in it for the long run, and Rodriguez and his kids are still running ahead, striving for more in the future.