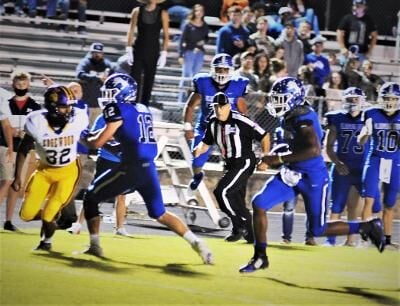 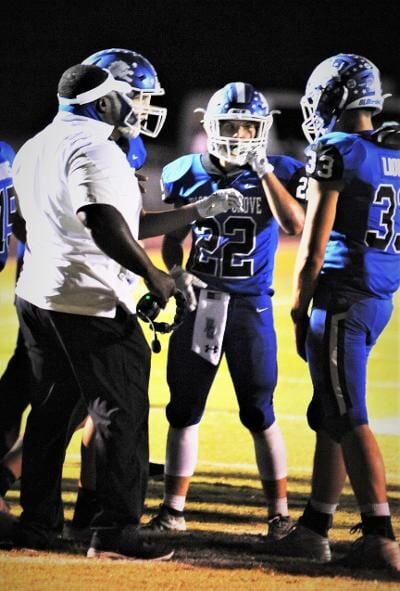 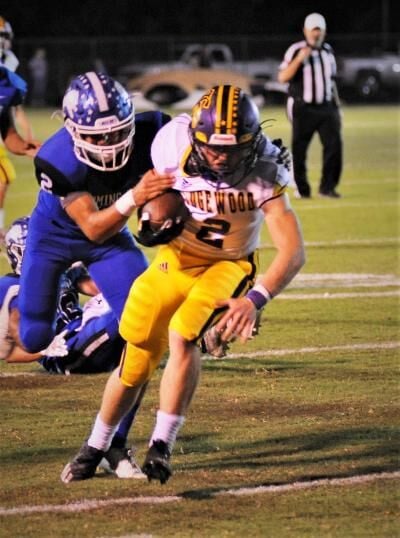 BLOOMING GROVE -- Someone should have taped the speech -- taped it and saved it for the playoff run.

The kids at Blooming Grove won't need a tape or a video or even an old fashion copy of the speech. They know what was in the speech and what it meant.

It was back in August, the dog days of summer when Blooming Grove coach Ervin Chandler told his kids he wasn't overly concerned with a fast start. He wanted a decent start, but he wanted something else more.

"I told them I don't want us to be good right away," Chandler said. "I told them I wanted us to start peaking in the seventh or eighth week of the season."

And here they are, Chandler's Young Lions, right where he wanted them to be. They're unbeaten in the District 7-3A DII race with a chance to win their first district title since 2015.

The Lions had a bye this week, and head into Game 8 next Friday with a 5-2 record and their eyes on not only making the playoffs, but making a playoff run.

They're 3-0 in the district race with three games left, beginning with defending district champ Palmer at Lion Stadium next Friday and ending against Golden Circle rival Rice. The sandwich is stuffed with a game against last-place Dallas Gateway in the middle.

It should be a memorable stretch run, but then again Chandler's kids have made some memories and already surprised some folks. Texas Football Magazine picked the Lions to finish fifth in the seven-team district, but that was an educated prediction. After all, the team has only five seniors on the 25-man roster, and Chandler is just in his second season in the Grove.

None of that mattered.

Chandler was talking playoffs in August, and talking about how he couldn't wait for his young kids to play this year. He saw the JV team go 9-1 a year ago, and knew how much talent he had coming up, and how much those young kids believed in each other.

Chandler's first team did play well and just missed making it to the playoffs, a torch everyone has carried into this season.

"They're young but they're hungry," Chandler said. "Seeing these kids grow has been the best part of the season."

The Lions throw a nice mix of talent and heart at teams and a blackboard that teaches a balanced and unselfish brand of offense and a non-stop, unrelenting defense that lives for the big play.

The Lions have made plenty all year with a Big D that has 12 sacks and 11 interceptions, and 40 tackles for losses. Yup, 40.

Sophomore Trent Nicholson has ignited this group with a motor that doesn't quit, and a heart that gets bigger on every play -- a kid who looks like he was born to play middle linebacker.

It's impossible to argue. Nicholson was a madman on defense last year and he just got bigger and faster this season. He's got numbers that would be impressive for a 10-game season, and the Lions have played just seven.

Nicholson has made 104 tackles in seven games, including 56 solos. He has four tackles for losses and a sack, and his energy sets the tone for the entire defense.

"Our defense has played lights out all year," Chandler said.

One big reason is Trent's older brother, Colton Nicholson, who is one of the most talented and versatile athletes in the Golden Circle, where he is a star in baseball, basketball and football.

Colton is having a tremendous senior season, playing both ways and leading the Lions defensive line, where he has ruined opponent's offenses. He has made  59 tackles, including 40 solos, and has been a show-stopper at defensive end, where he has a mind-boggling 10 tackles for losses and four sacks.

"Colton has been a great leader for us," Chandler said.

Chandler said the biggest surprise has been Justice Revill, who is playing football for the first time since eighth grade and playing lights out on defense and leading the team in receptions on offense, where he has made 11 catches for 166 yards (that's a whopping 23.7 average) and a team-leading three touchdowns.

Josh Glasco has seven receptions for 154 yards (22.0 average) and Bryson Fisher for 155 yards and a team-leading 25.8 yards per catch average.

They spread the wealth in the Grove, where Chandler has used a pair of quarterbacks to run an offense that has produced 467 passing yards and 1,267 yards on the ground.

Sophomore Kelton Bell has completed 24-of-35 passes for 360 yards and Timmy Hamilton has connected on 12-of-31 for another 107 yards.

There are sophomores everywhere, including three on the offensive line: Center Trey Willis, Andrew Melton and Ismael Ramirez, as well as kicker Emmanuel Rosas.

Hamilton and Matthew Beacom have carried the load and the ball for BG's running game. Hamilton has rushed for 411 yards on 69 carries (6.0 average) and Beacom has run for 572 yards on 92 carries (6.2) and scored four touchdowns, including the game-winner with three seconds left that beat Edgewood 18-15 in a critical district showdown two weeks ago.

Beacom leads the secondary with three interceptions and Hamilton and Revill have two picks apiece.

"The best part of the season has been watching this team grow up," Chandler said. We've gotten better every week."

The kids, the school and the town are all onboard for what Chandler believes will be a memorable run in the playoffs. Chandler told his kids at the beginning of the year they were going to make a run.

"I told them we're going to shock some people," he said. "It's been fun. These kids are fun to coach. Everyone on the varsity has had a hand in what we've done.

"We knew we would have to go through some growing pains to do what we needed to do," he said. "The kids have been great and the people in the community are fired up."

Why not? The Lions are right where they want to be ...