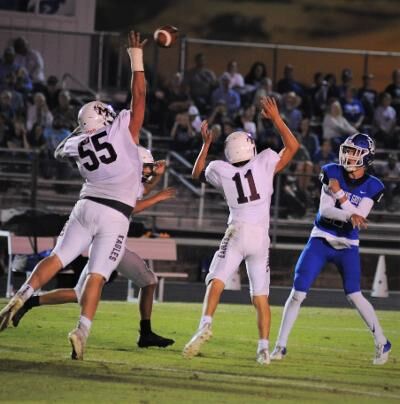 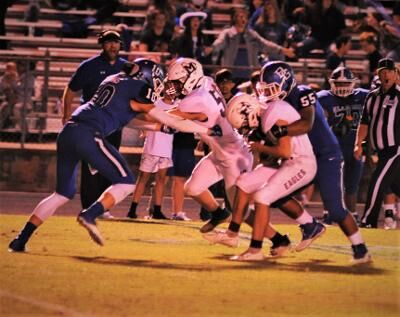 Blooming Grove's Adam Sanchez makes a tackle against Mildred. BG won the game 21-12, thanks to a strong defensive effort. 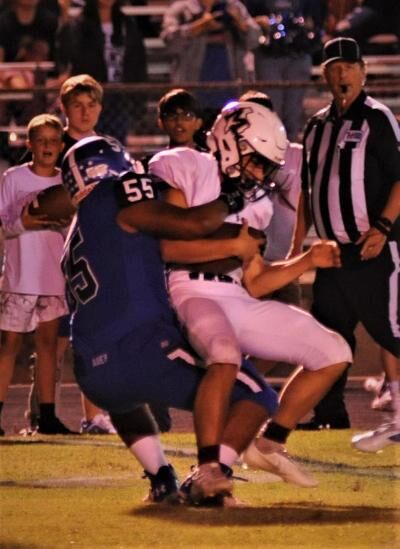 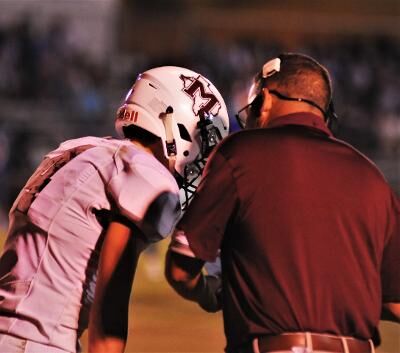 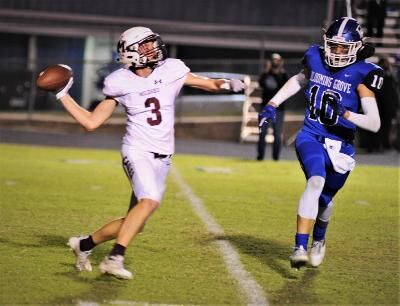 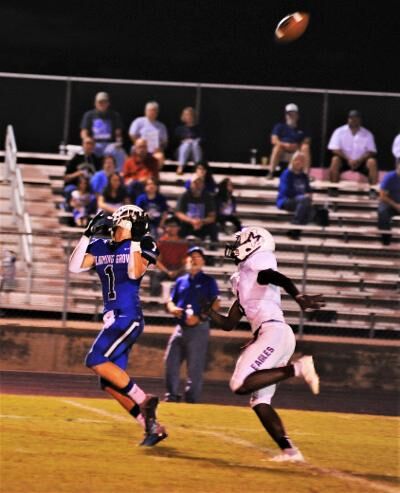 Blooming Grove's Kelton Bell gets ready to catch a deep pass against Mildred. 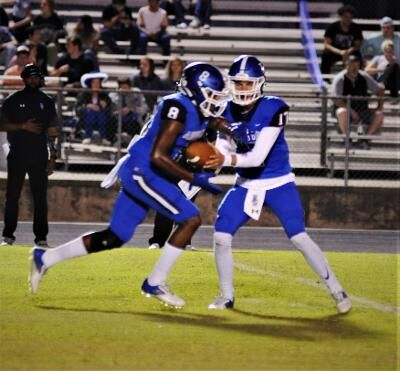 Blooming Grove quarterback Levi Hopper is seen here handing the ball off to  Timmy Hamilton in an earlier game. Hamilton scored the Lions' only rushing touchdown Friday in Edgewood, where the Lions lost their first district game. 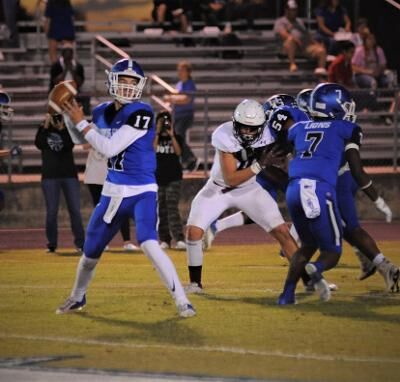 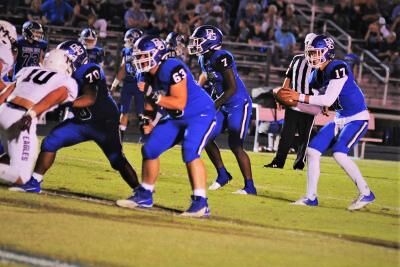 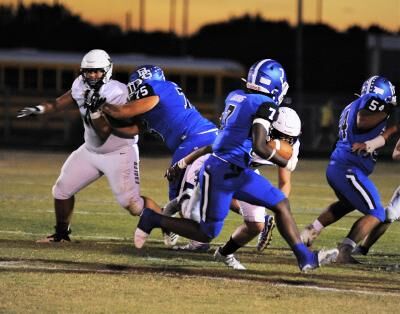 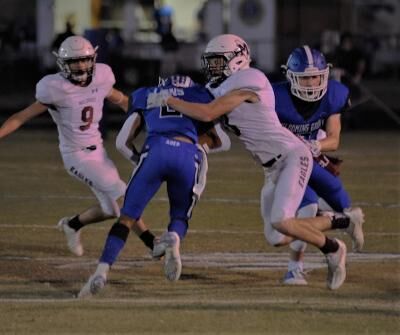 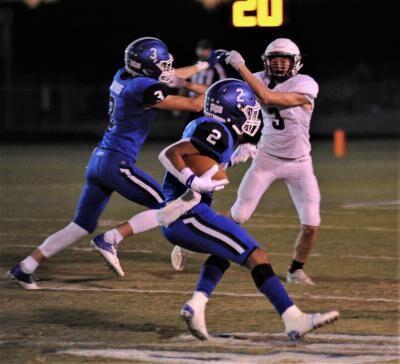 Blooming Grove's Adam Sanchez makes a tackle against Mildred. BG won the game 21-12, thanks to a strong defensive effort.

Blooming Grove's Kelton Bell gets ready to catch a deep pass against Mildred.

Blooming Grove quarterback Levi Hopper is seen here handing the ball off to  Timmy Hamilton in an earlier game. Hamilton scored the Lions' only rushing touchdown Friday in Edgewood, where the Lions lost their first district game.

BLOOMING GROVE -- The district opening football game Friday night between the Mildred Eagles and the Blooming Grove Lions might not have been one “for the ages” as the old saying goes, but it definitely was entertaining.

Both teams fought tooth and nail for four quarters before the Lions survived a late Eagle rally at the end of the game and came away with a 21-12 win.

Both Eagle head coach Duke Dalton and Lion head coach Jeremy Gantt saw their offenses move the ball up and down the field throughout the contest only to have their respective defenses rise to the task at hand and stop drives deep in enemy territory time and time again. The Lions finally built a 21-0 lead and then had to hold on as Mildred rallied to within nine points after the Eagles scored twice with under two minutes remaining in the game.

The visiting Eagles finished the game with 94 yards rushing and 115 yards passing. Quarterback Jake Callahan completed 11 of 19 passes for 115 yards. Callahan had a rushing touchdown late in the game as well. Austin Wing was the leading receiver with 87 yards and 6 receptions. Wing also rushed for 23 yards in 7 carries. Receiver Nick Carrizales caught 3 passes for 18 yards and Jordyn Jones caught 1 for 12. Ethan Frye was the leading rusher for the Eagles with 41 yards in 16 carries. He had a rushing touchdown also. Cody Hayes carried the ball 4 times for 19 yards.

Blooming Grove quarterback Levi Hopper completed 9 of 20 passes for 100 yards and one touchdown. Hopper also carried the ball 10 times for 18 yards and a score. Receiver Noah Hutchison led the way for the Lions with 5 catches for 56 yards and Bryson Fisher finished with 2 catches for 12 yards.

Both teams had their share of good play on the defensive side of the ball. For the Eagles, good defensive play came from Wing, Hayes, Andrew Smith, Jones, Gabe Irvine, Callahan, and Antonio Tipton, just to name a few. For the Lions, good defensive efforts came from Devon Hood, Fisher, Bell, DeMarco Debrow, Hamilton, Ben Baumgartner, Hutchison, Trent Nicholson, and Tovar, among others.

The teams traded punts early in the game and then the Lions got a break when Baumgartner recovered a fumble at the Eagle 41-yard line midway through the first quarter. However, the Eagles defense rose to the occasion and forced the Lions to turn the ball over on downs at the 36 yard line.

Early in the second quarter Lion quarterback Hopper connected with Bell on what appeared to be a 63 yard scoring pass. However, a holding penalty against Blooming Grove wiped out the touchdown and the Lions eventually gave the ball up on downs.

A nice punt by Bell late in the quarter eventually helped set up the first score of the game. The Eagles were pinned deep in their own territory at the nine yard line and the Lions defense held and forced a short punt. Bell returned the punt to the 23 of Mildred, but a penalty against the Lions moved the ball back to the 38. It took seven plays from there, but Hamilton finally scored on a five yard run with only 34 seconds left in the half. Chris Castillo kicked the extra point to the Lions up 7-0 at the half.

Blooming Grove opened the second half with an impressive 12 play, 59 yard drive that resulted in their second touchdown of the game. The running of Hopper, Coleman, and Hamilton, and the pass catching of Fisher and Hamilton helped move the ball to the one yard line. From there Hopper called his own number for the score with 7:31 remaining in the quarter. The snap on the extra point attempt was mishandled and it left the score at 13-0.

The next score of the game came at the 6:52 mark of quarter number four. Saddled once again with bad field position, the Eagles turned the ball over at their own 30 when a fourth down pass attempt was incomplete. On the fourth play of the drive Hopper was able to connect with Hamilton on a 27 yard pass play for the touchdown. Hopper carried for the two point conversion to push the lead to 21-0.

Late in the game the Eagles were able to get their offense going, along with some penalty help by the Lions. Starting at their own 18 it was the passing of Callahan that got the offense moving. The big play of the drive was a 43-yard pass completion from Callahan to Wing that moved the ball to the 20. A penalty against the Lions moved it even further to the 5 and Frye was able to score on a run with 1:41 left in the game. The conversion run failed, leaving the score at 21-6.

A successful onside kick by the Eagles following the touchdown had them in great field position at the Lions 49. A run of 23 yards by Hayes, coupled with another major penalty against Blooming Grove, had the Eagles at the 13 yard line. Frye carried twice to the 4 and then Callahan finished it with a run for the score with 31 seconds left in the contest. The conversion pass attempt failed and the score was now 21-12.

The Eagles attempted another onside kick following their latest score but this time Baumgartner recovered for the Lions to preserve the win.