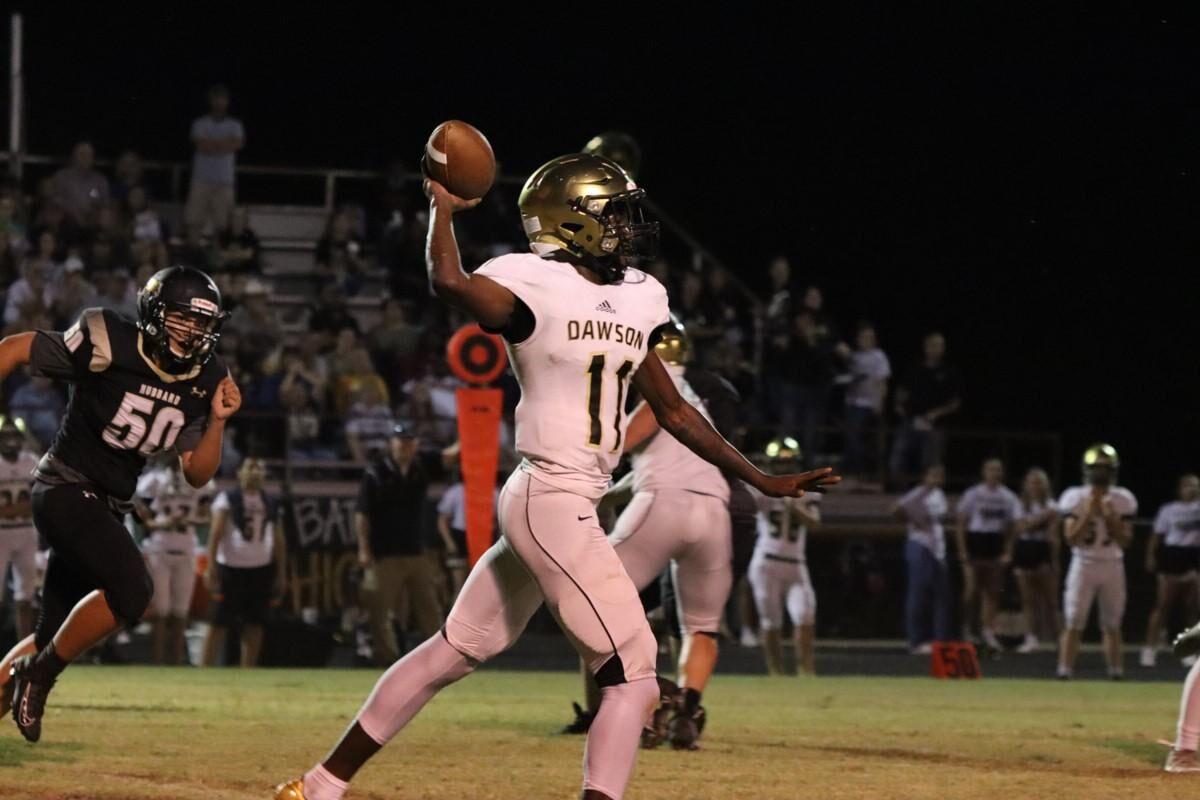 Dawson QB Isaiah Johnson is coming off a big game against Kerens, finishing the night with 163 yards rushing and 154 yards passing. 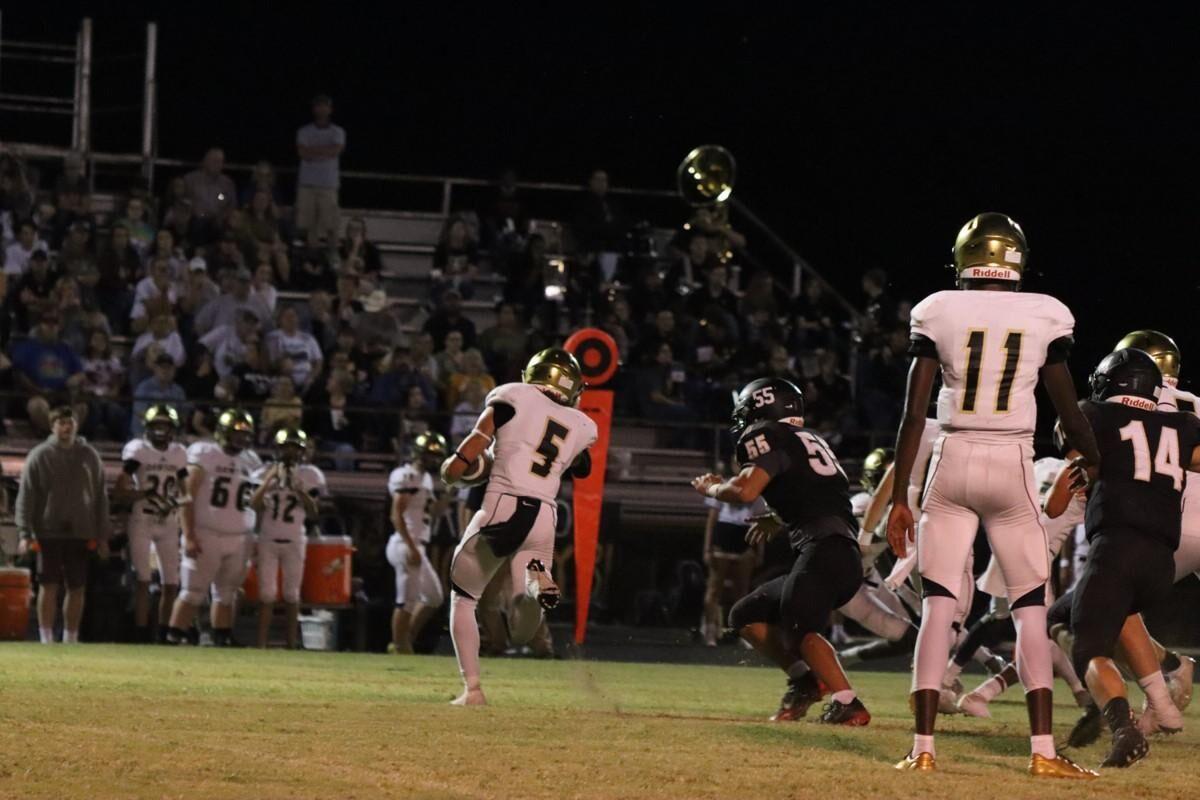 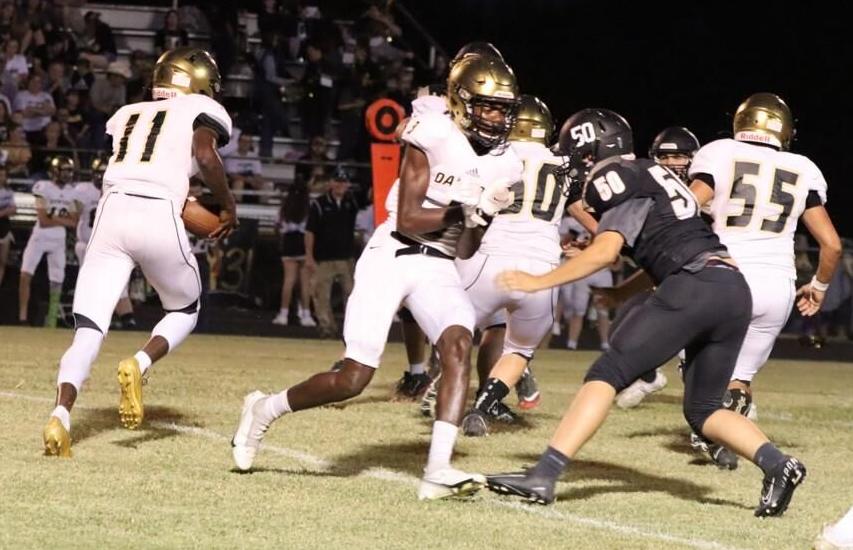 He ran for 271 yards on just 20 carries and scored four touchdowns and he threw for 127 yards and three touchdowns as the Bulldogs finished with 600 yards of total offense in their win over Axtell. 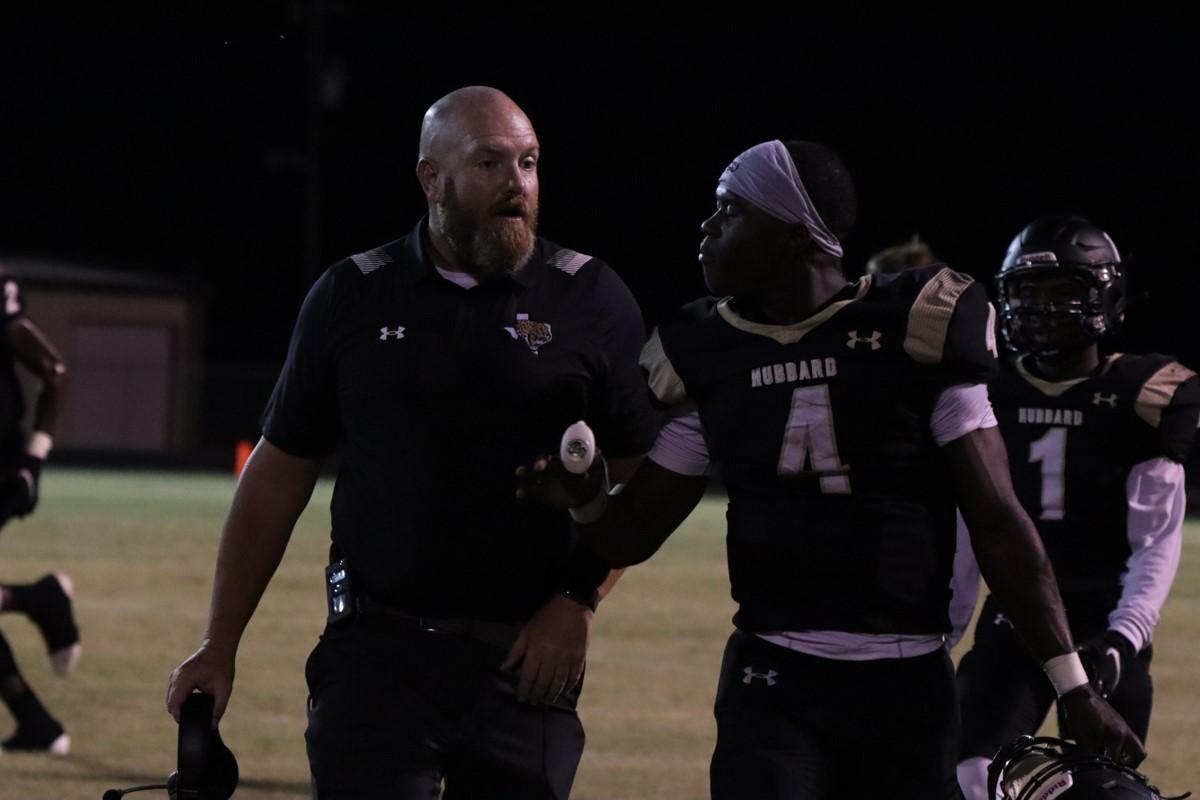 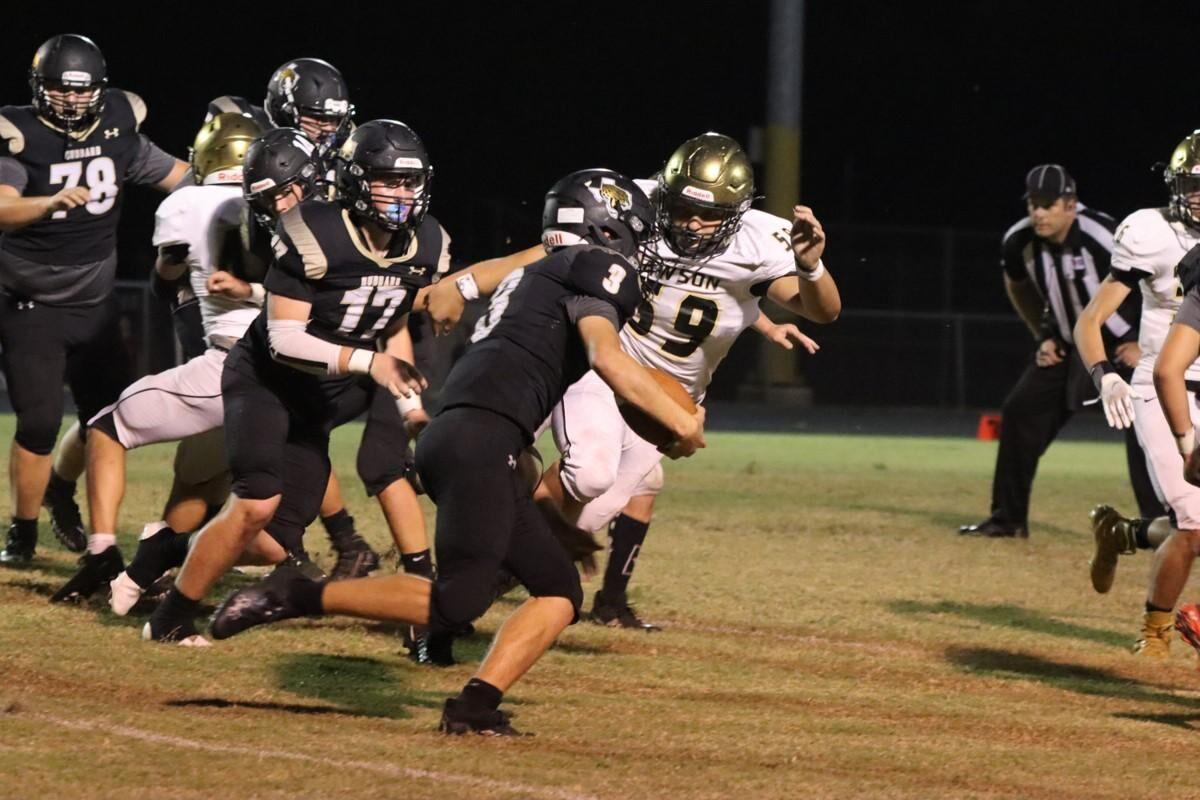 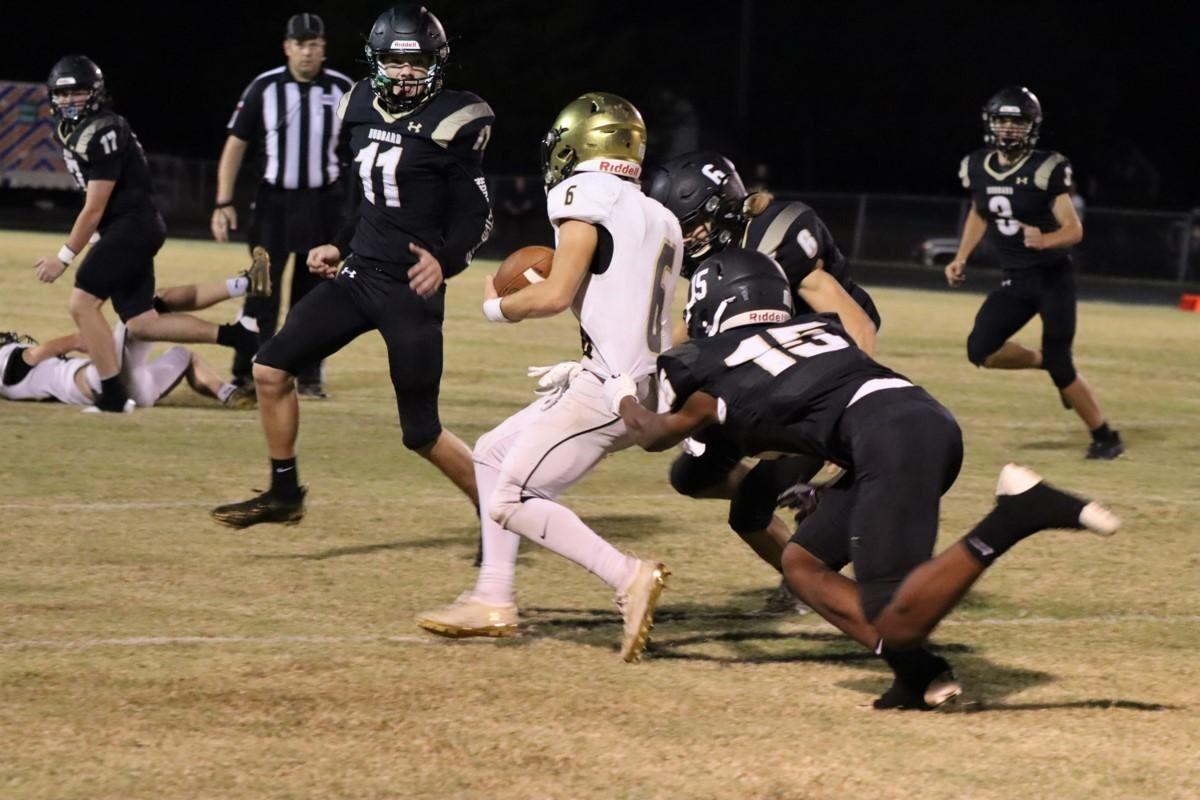 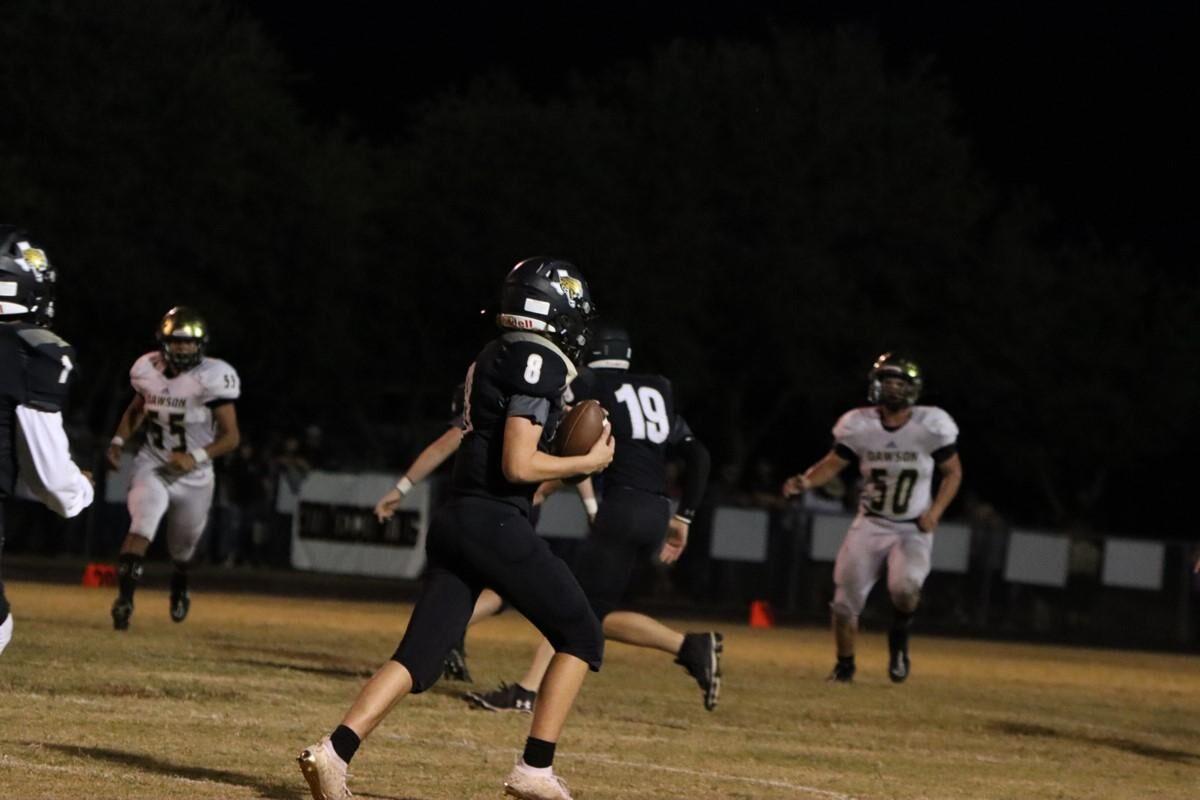 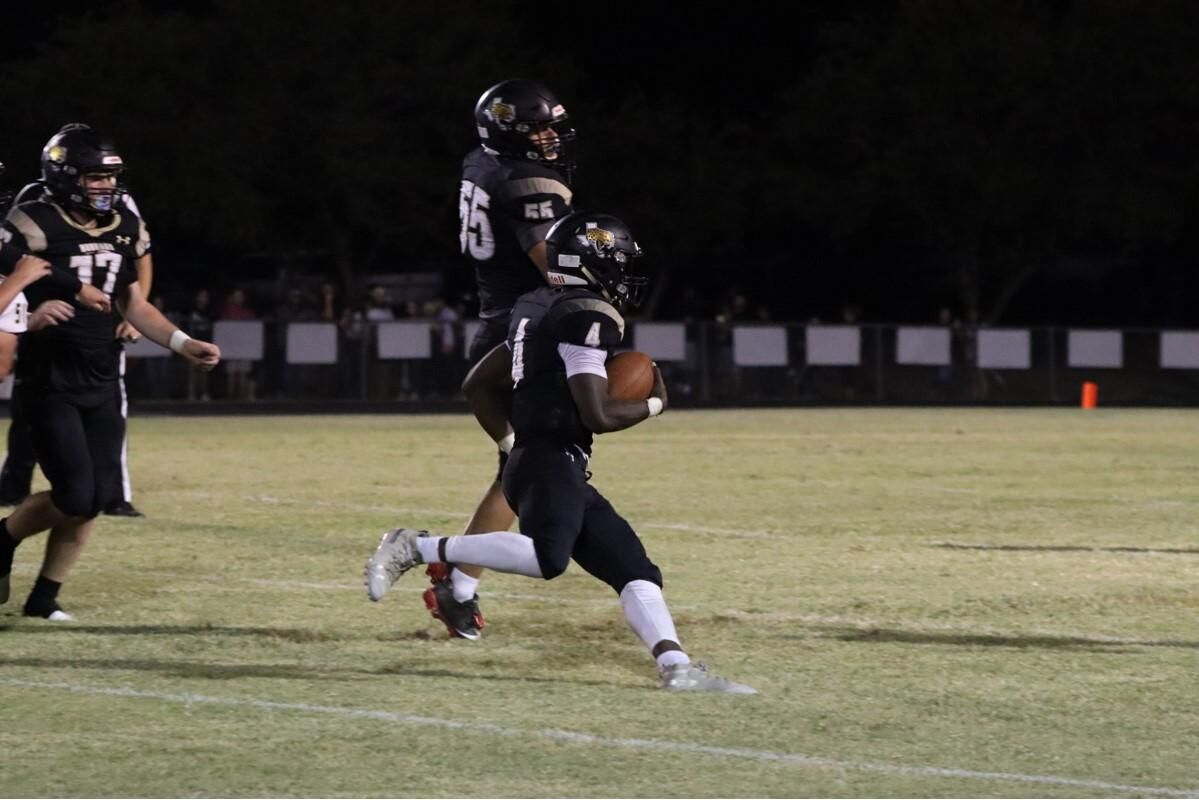 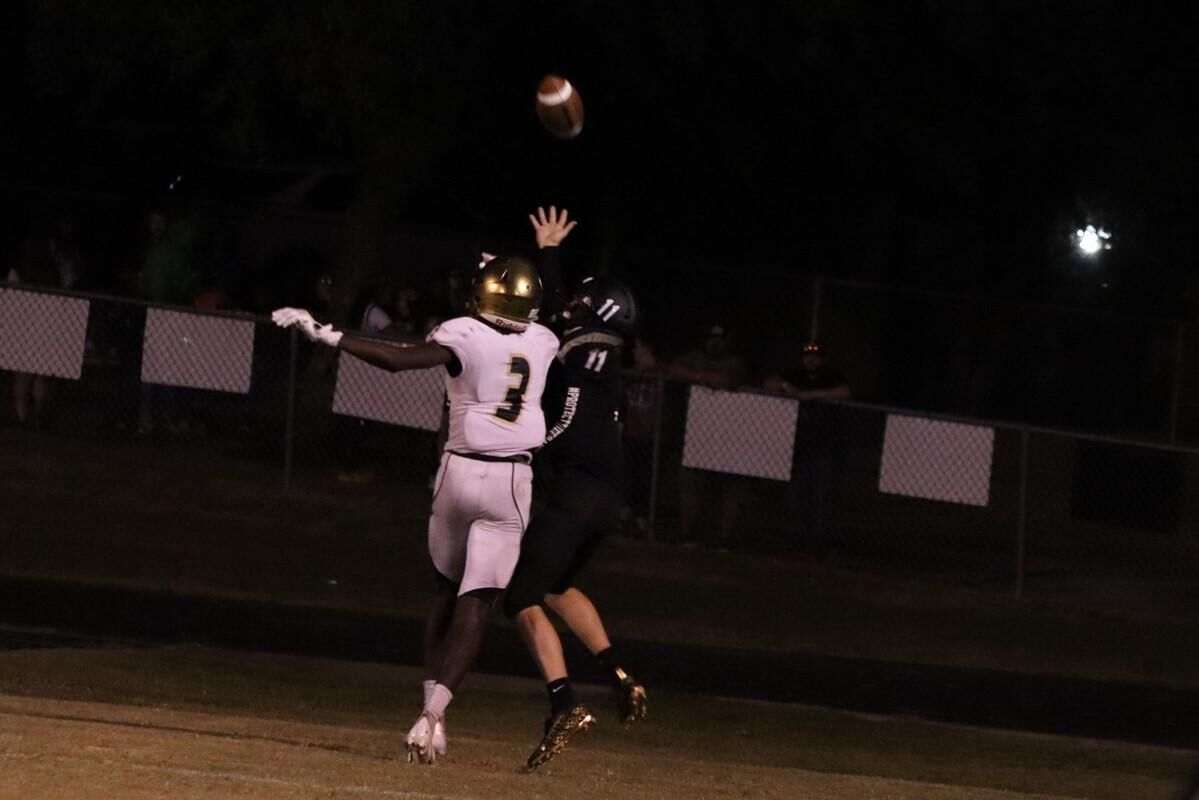 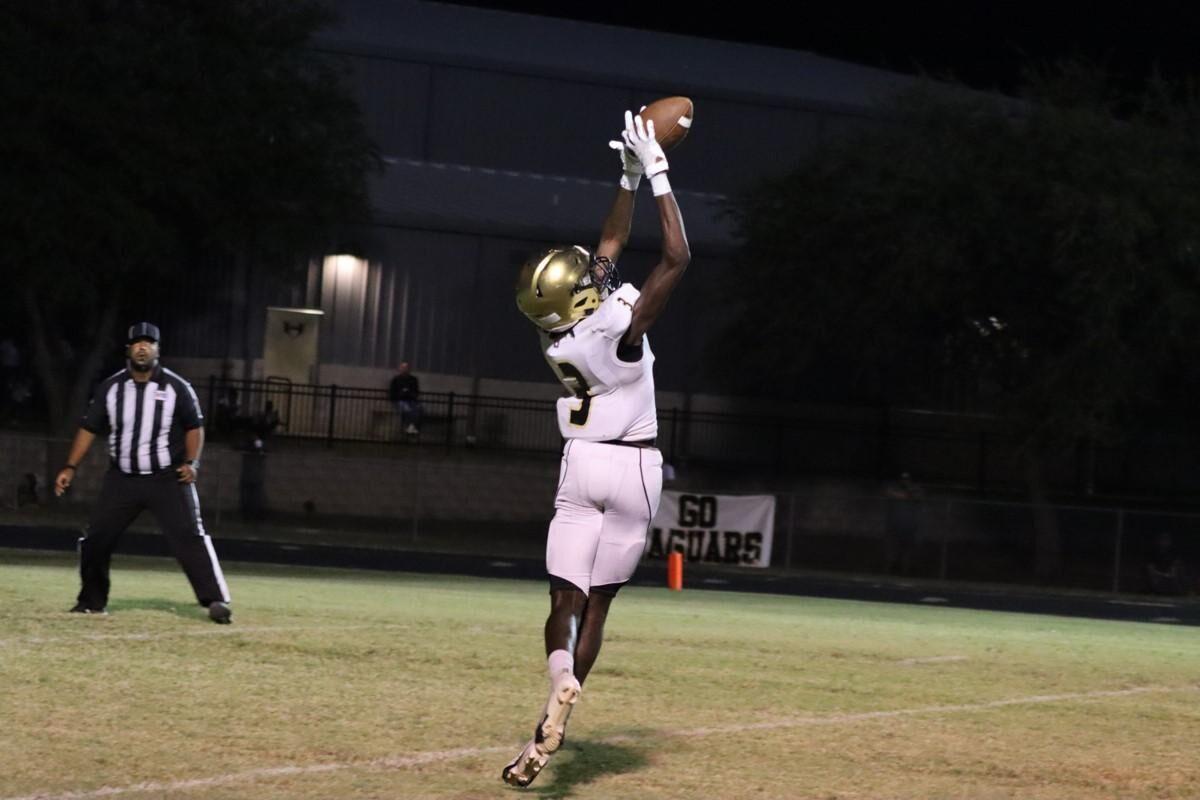 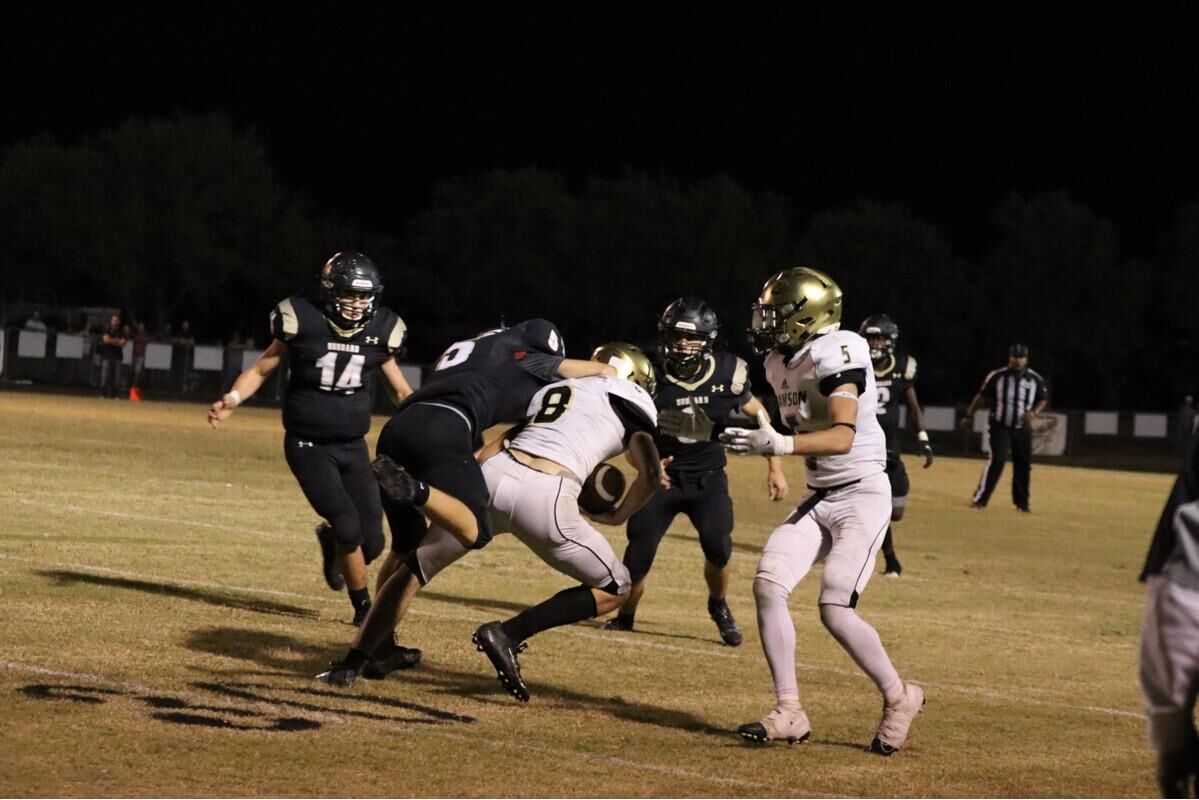 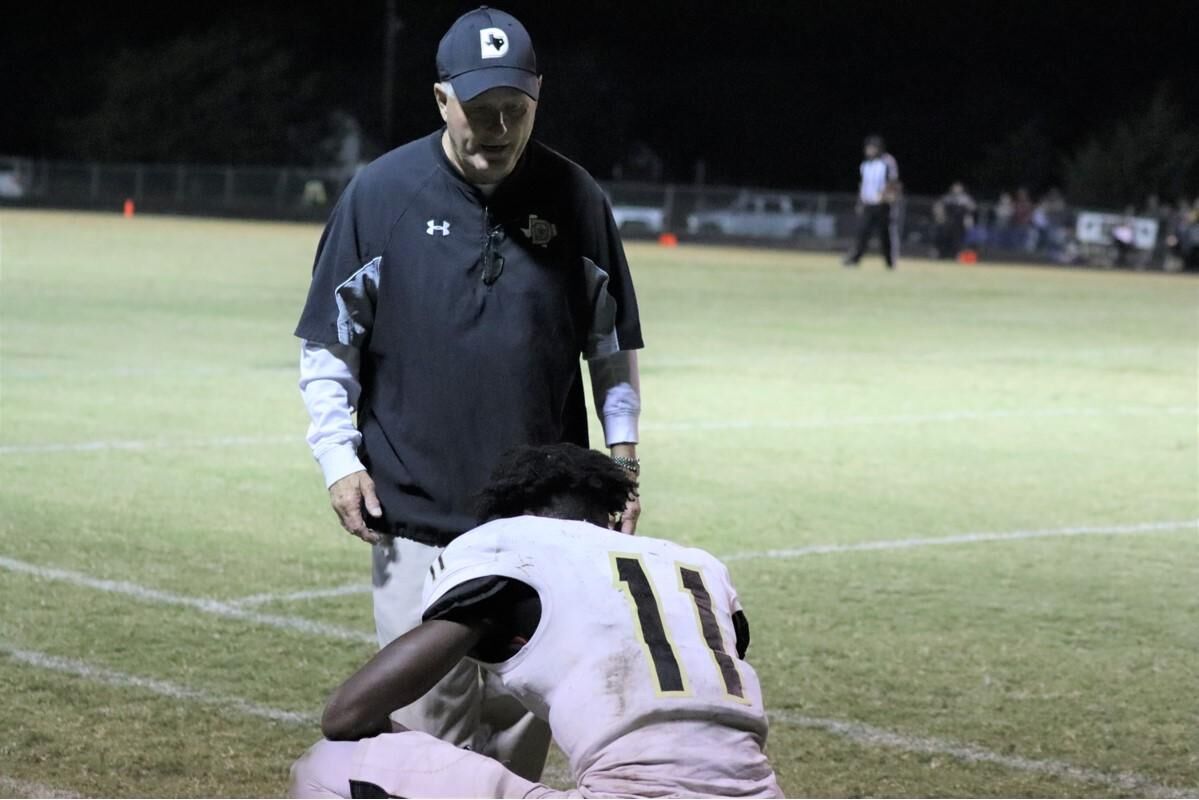 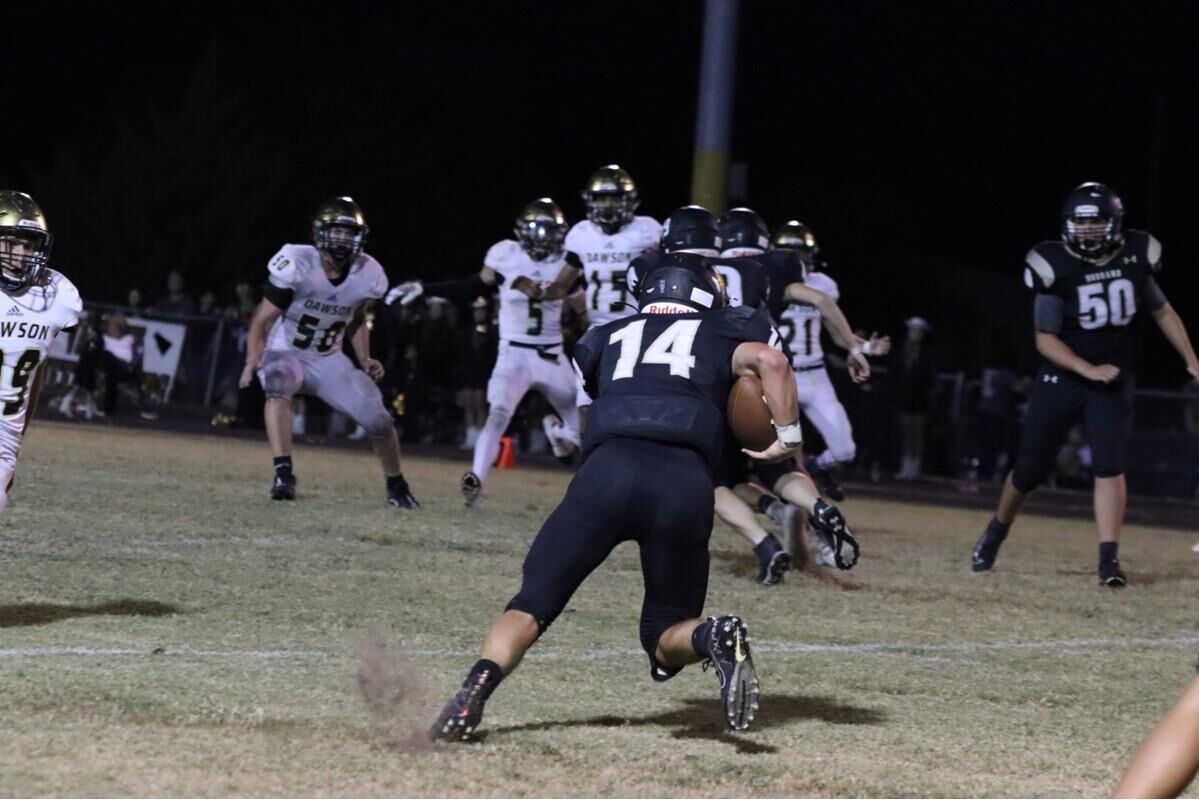 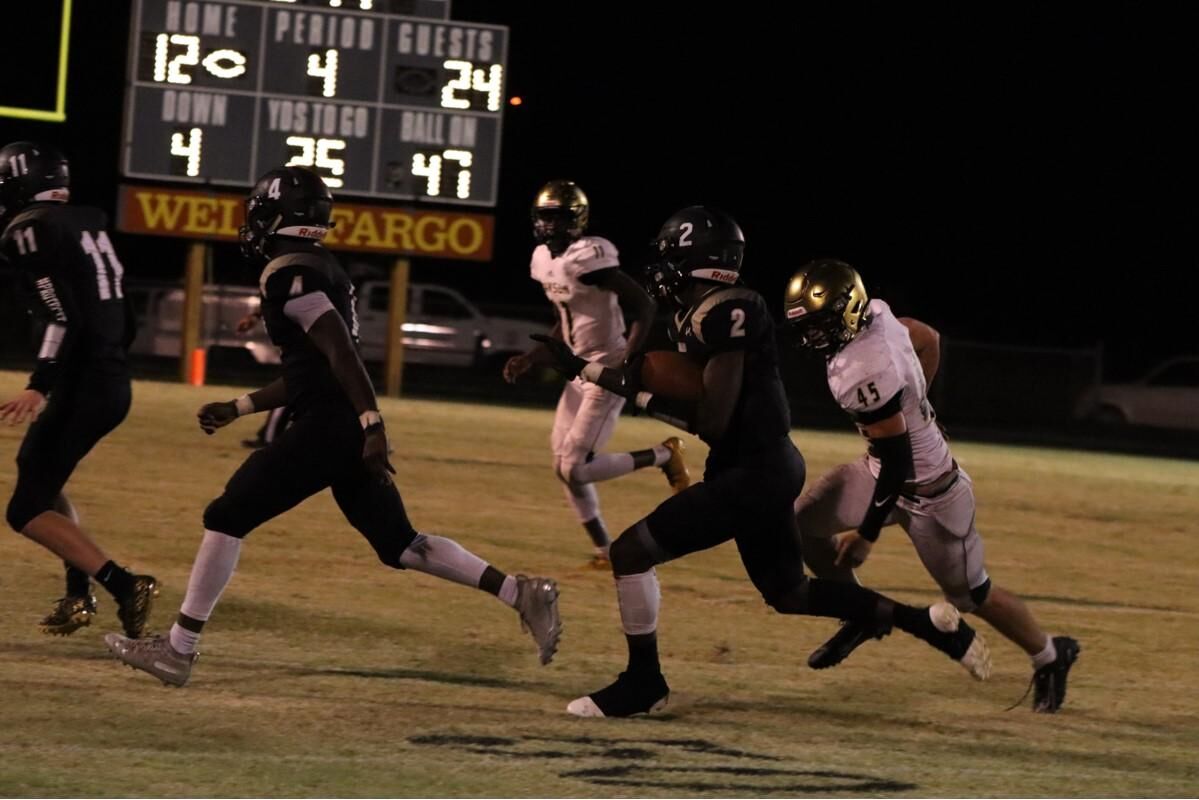 Dawson QB Isaiah Johnson is coming off a big game against Kerens, finishing the night with 163 yards rushing and 154 yards passing.

He ran for 271 yards on just 20 carries and scored four touchdowns and he threw for 127 yards and three touchdowns as the Bulldogs finished with 600 yards of total offense in their win over Axtell.

DAWSON – You never know when a single moment can be the catalyst for bigger things down the road.

In football terms, a single play can change the course of the season for a team.

The Dawson Bulldogs might have just had that single play to spark the Bulldogs to their first win of the season, 24-12, over rival Hubbard to spoil the Jaguars’ homecoming Friday night.

With Dawson down by a score already, and the Jaguars threatening for more after a blocked punt, the Bulldogs were able to come up with a big, no huge, forced turnover, recovering a Jaguar fumble into the end zone for a touchback and a game-, possibly season-, turning play.

Dawson, now with momentum, immediately responded on offense with a 10-play drive that culminated with Isaac Johnson's 23-yard touchdown catch from brother Isaiah Johnson to tie the score, 6-6, early in the second quarter.  Dawson would take the lead, 8-6, on a successful two-point conversion run by Micah McCall.

If there was a runner-up award for season-changing play, it would be on a previous Johnson and Johnson connection for 16 yards on fourth down to keep the drive alive.

Hubbard had taken the early lead on a 4-yard run by Shelby Noppeney on the game’s first drive, but, for the rest of the night, Dawson would hold the lead and force the Jags to play catch-up.

Dawson would extend the lead on the opening possession of the second half, moving the football 59 yards down the field in just seven plays.  A big pass from Isaiah Johnson to Cade Onstott for 24 yards would get the drive started, followed by six consecutive run plays.  Isaiah Johnson would cap off the drive with a short, 3-yard score. Johnson and Johnson would add the two-point conversion to push the lead to two scores, 16-6.

Isaiah Johnson would lead the Bulldogs in rushing with 129 yards on 19 carries.

Hubbard used a defensive stop and a big run by quarterback Kendan Johnson for 32 yards to pull within four points, 16-12, on a 8-yard pass from the sophomore quarterback to MJ Ryman early in the fourth quarter.

Kendan Johnson would lead all rushers on the night with 23 carries and 143 yards.

Another Jaguar stop would give Hubbard the football back at midfield with a chance to take a fourth-quarter lead.

Fortunately for Dawson, the Johnson and Johnson collaboration would step in, and it would be no more tears for Bulldog fans.

Isaac Johnson intercepted a Hubbard pass deep in Bulldog territory to thwart the Jaguar drive at the 14-yard line. This would be followed by a 20-yard run by Isaiah Johnson, and then the duo put the game out of reach with a 67-yard touchdown pass with just over four minutes remaining.  Hastin Easley added the two-point conversion and the final points of the night, 24-12.

Isaac Johnson finished the night with three catches for 106 yards and two touchdowns, both from Isaiah Johnson, who had 166 yards passing.

The Bulldog defense, led by Payton McCormack, McCall, and Easley, closed the door on the game to give the Bulldogs the win.

With the win, the Bulldogs close out the non-district portion of their schedule at 1-4, while Hubbard drops to 3-2. Both teams will take a well-earned week off before beginning district play in two weeks.

Dawson opens up District 8-2A DI play with a road game at Kerens, while the Jaguars host Wortham to begin the District 10-2A DII schedule