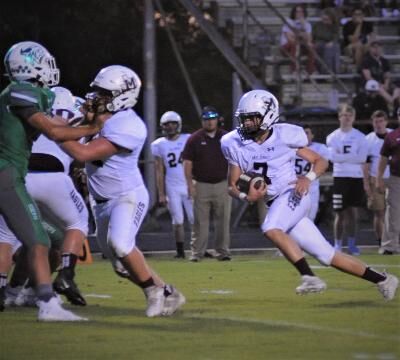 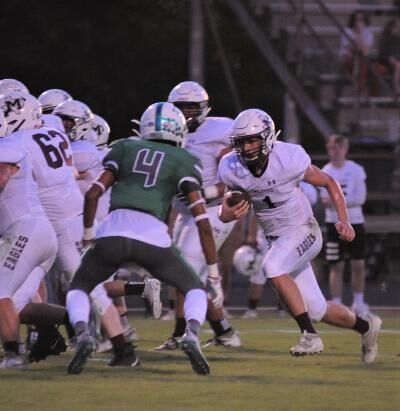 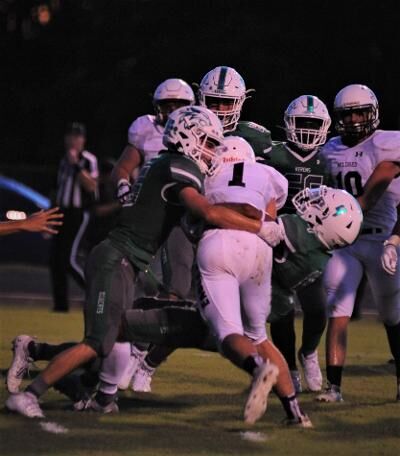 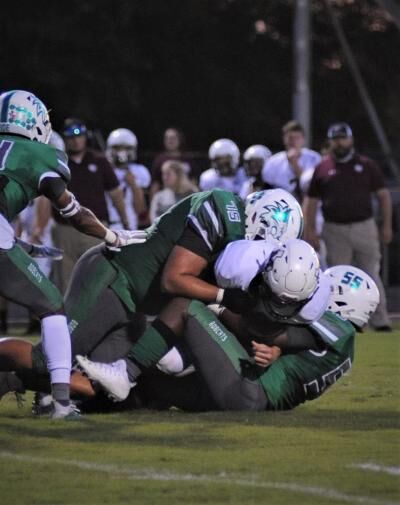 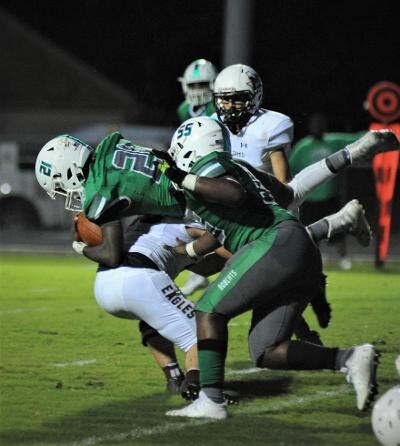 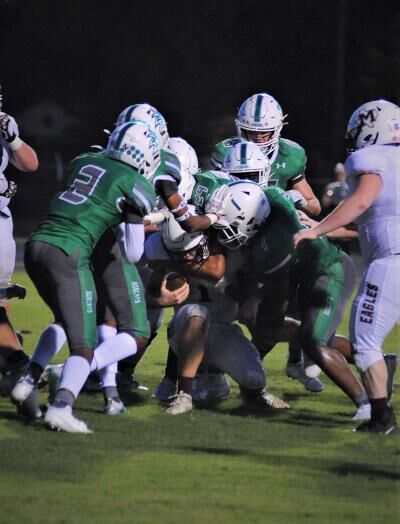 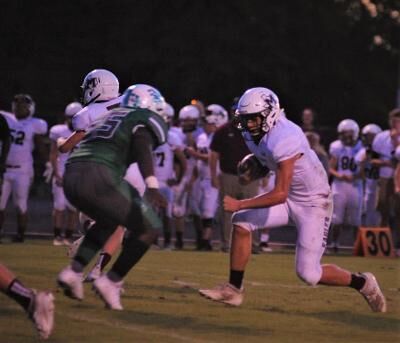 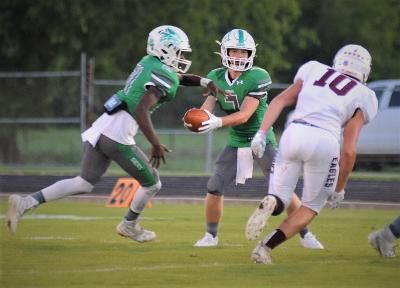 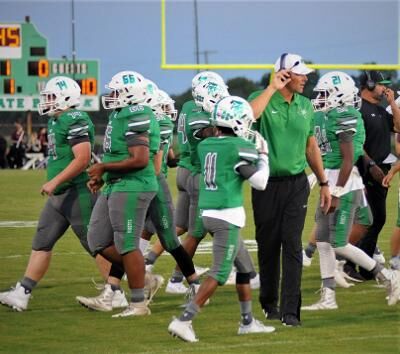 KERENS -- Mildred quarterback Daniel Ayers bulled his way across the end zone with 15 seconds left in the game, setting up Sammy Bustos to score the game-winning two-point conversion as the Mildred Eagles beat rival Kerens Bobcats 8-7 in Kerens Friday night.

Both teams played outstanding defense in a game that could have easily gone either way.

The Eagles were down seven starters,  but had three girls try out and make the team as kickers with Cadence Cline becoming the first female football player to play in Mildred history when she kicked the ball off to open the second half.

Ariana Neason and Kennedy Gosdin will share kicking  duties with Cline, who is an exceptional all-round athlete who plays several sports, including basketball, soccer as well as running for Mildred's state qualifying cross country team. All girls play club soccer.

The defenses were the story of the game with the Bobcat defense coming up with the first big stop in the opening seconds of the second quarter as the Eagles drove the ball 62 yards to the Bobcat 2-yard line, where the Bobcats forced the Eagles to turn the ball over on downs at the 1-yard line on a fourth-and-goal play.

The Eagles and Bobcats traded punts before Kerens quarterback Brayden May found Demarya Baxter open on a busted play. Baxter raced the Eagle defenders for a 57-yard touchdown reception.

The Bobcat defense came up with another huge stop in the third quarter as the Eagles drove 54 yards on 12 plays down to the Kerens 13-yard line where they were forced to turn the ball over on downs.

The Eagles and Bobcats again traded punts until late in the fourth quarter. The Eagles came up with a big stop forcing the Bobcats to turn the ball over on downs giving the Eagles the ball at their 44-yard line.

Ian Stewart picked up seven rushing yards on the opening play followed by three straight Ayers' runs, pushing the ball to the Bobcat 31-yard line. Ayers then found Sammy Bustos for an 18-yard reception to the Bobcat 14 as the clock was winding down.

Ayers then hit Kain Holliman on the following play for a 12-yard reception putting the Eagles on the Bobcat 2-yard line.

Ayers fought his way into the end zone on the next play with 15 seconds left on the clock putting the score at 7-6 with the Bobcats in the lead.

Ayers went down on the play and was forced to sit out for the two-point- conversion. Bustos, a wide receiver, was forced to step in and play quarterback on the biggest play of the night. He took the snap on his first play ever at quarterback and pushed his way through the Bobcat defenders for the two-point conversion run, giving the Eagles the lead.

Cline kicked the ball off for the Eagles, giving the Bobcats the ball back with five seconds left in the game, but the Bobcats were unable to find a way to the end zone.

This was an outstanding defensive battle played by both teams. Both teams played great on defense. Austin Wing, Michael York, and Tyrone Williams all turned in another great game defensively for the Eagles with Williams coming up with a big sack late in the game.

The Eagles are now 2-1 after winning for the second week in a row, and both victories have been dramatic nail-biters. They came back to beat Cayuga 18-16 last week.

Mildred's defense held the Bobcats to 42 rushing yards for the game with 140 passing yards. The Eagles ran for 197 rushing yards and passed for 65.

Ayers led the Eagles with 139 rushing yards and threw for all 65 passing yards. The Eagles controlled the clock with their multiple long drives and ended up running 58 plays to the Bobcats 38 plays. The Bobcats had only six first downs.

Josh Brown was the leading rusher for Kerens with 24 yards. Damarya Baxter, Jaylon Harris and Brown had big games for the Bobcats, who are now 1-2.

Braden May turned in a great game passing for the Bobcats completing 13 out of 17 passes for 140 yards and the touchdown to Baxter in addition to rushing for 13 yards.

"We had seven starters out," Mildred coach Duke Dalton said. "I told Daniel everything was going to be on him and he sure showed up in the fourth quarter when it counted.

"All those guys played both sides of the ball and defensively they played great,'' he said. "As long as we play well defensively they give us a chance to win and we will get better on offense. We lost our tight end on Thursday and credit Kerens, they had a good game plan for us. It was a good hard game and we just came out on top."

Dalton praised the young ladies who played for Mildred.

"I appreciate them coming out," he said. "They did a great job and really put in the work. Cline did great on kickoffs, good sky kickoffs, exactly what we wanted her to do.''

The Eagles move on to face Italy in Italy next week while Kerens travels to Rice.