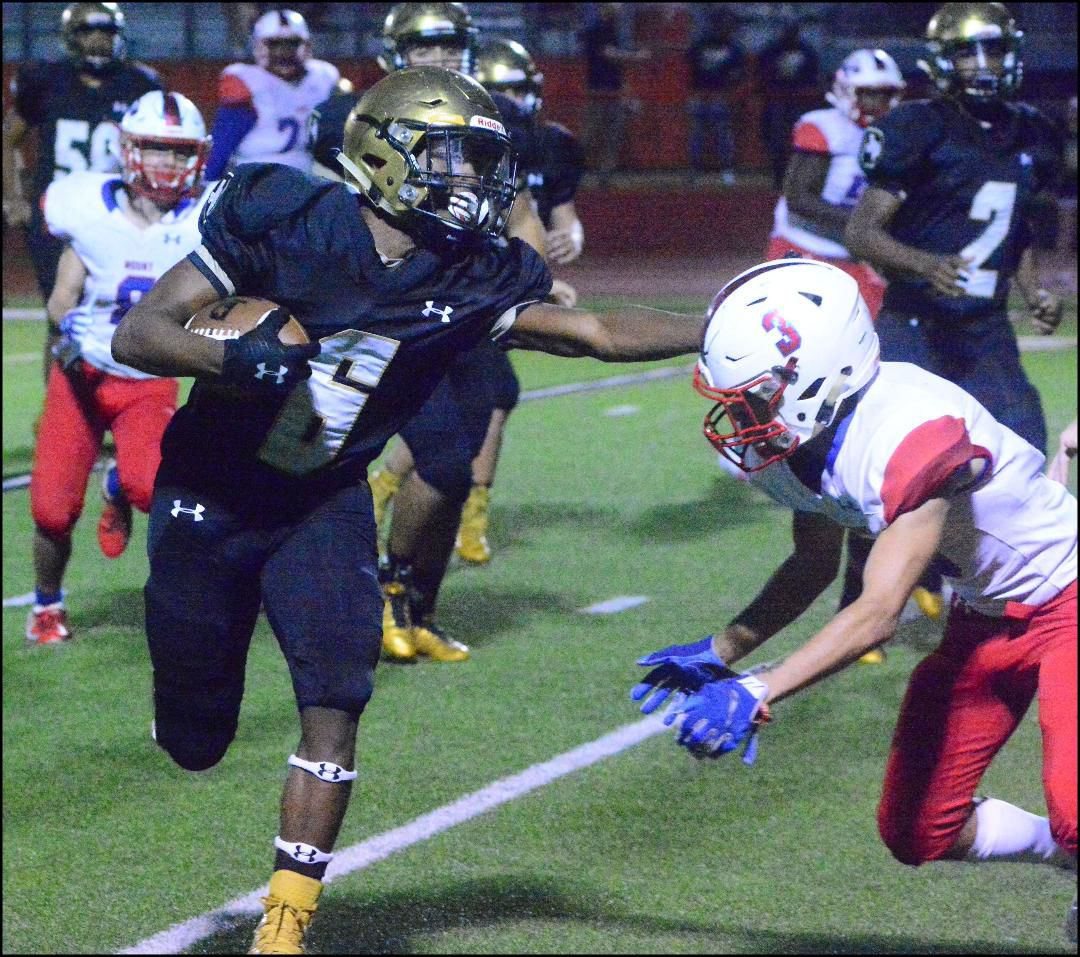 The awards were just released because Mart won the state title this week. 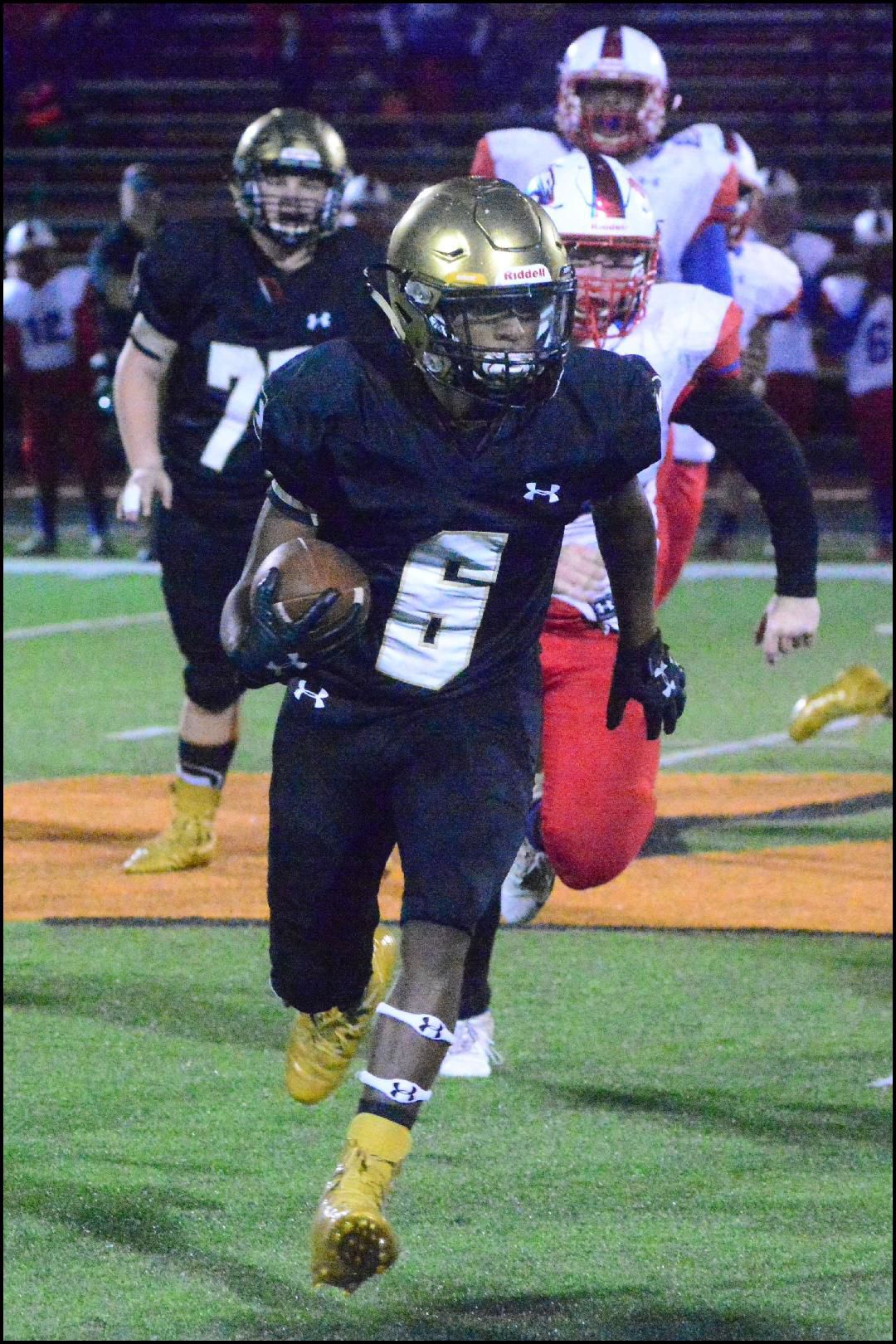 Dawson's Jakoby Moore, seen here on a touchdown run in the playoffs, did it all for the Bulldogs football team, rushing for 765 yards and 12 touchdowns, running back punts, including three for TDs, and playing in the secondary, where he intercepted two passes to help the Bulldogs win 10 games and advance to the 2A DII Region Quarterfinals. 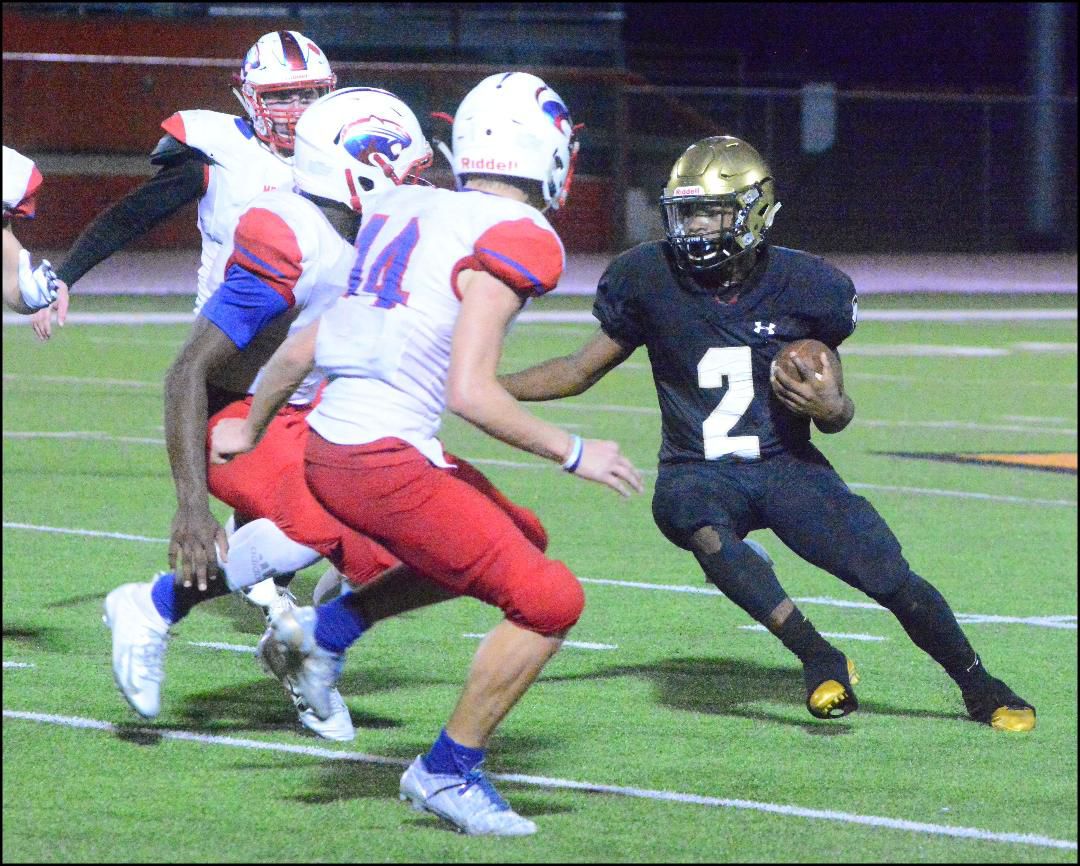 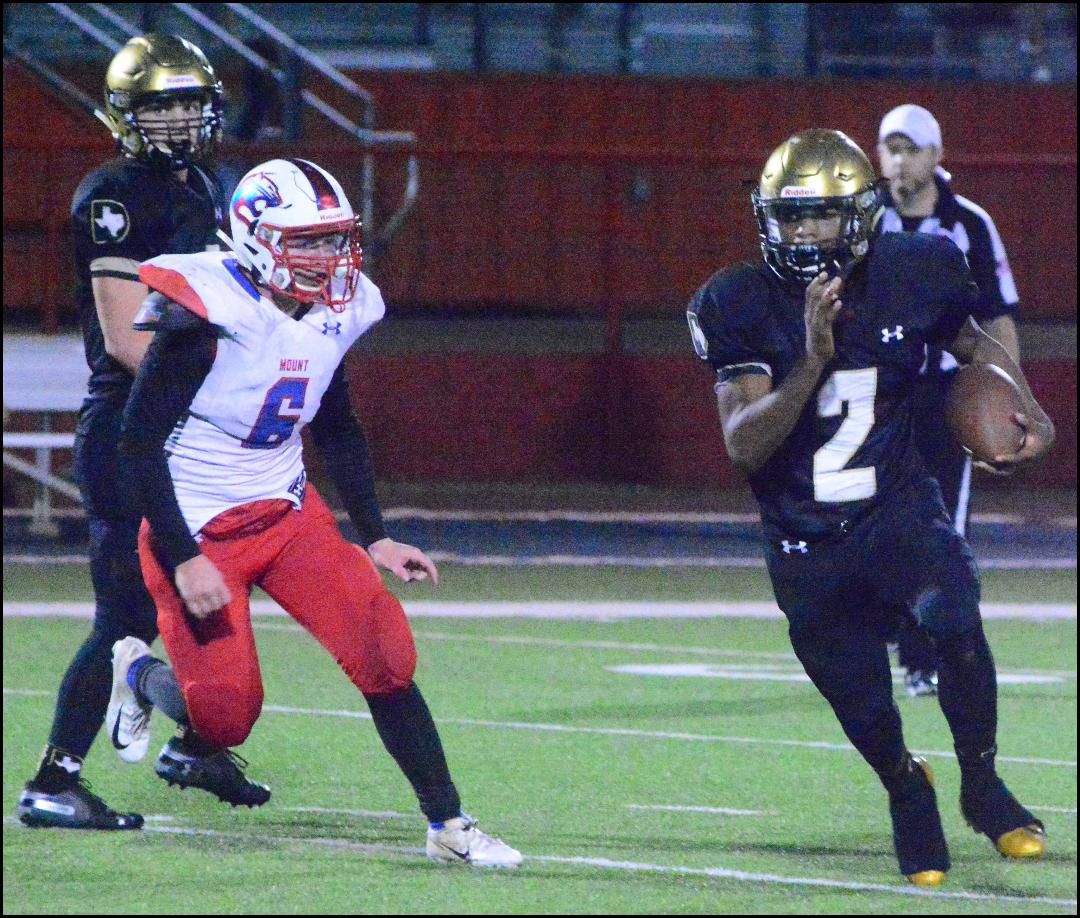 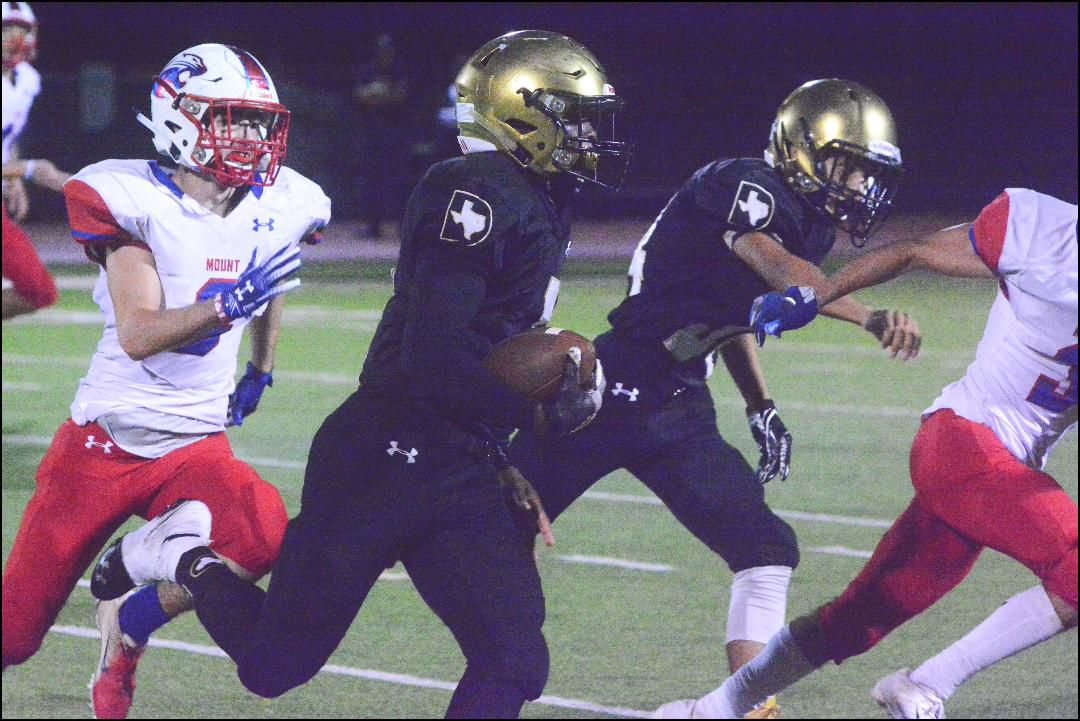 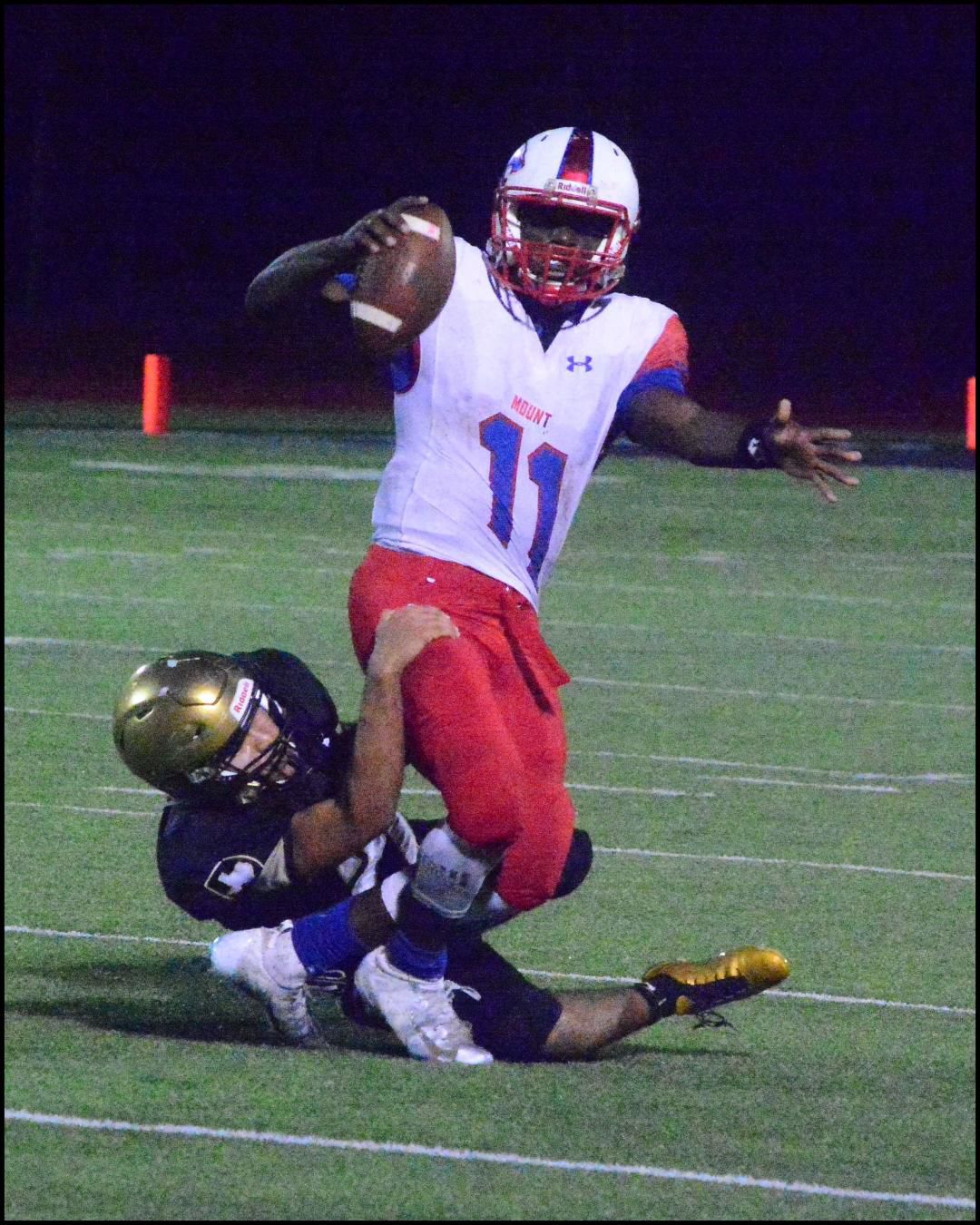 The awards were just released because Mart won the state title this week.

Dawson's Jakoby Moore, seen here on a touchdown run in the playoffs, did it all for the Bulldogs football team, rushing for 765 yards and 12 touchdowns, running back punts, including three for TDs, and playing in the secondary, where he intercepted two passes to help the Bulldogs win 10 games and advance to the 2A DII Region Quarterfinals.

"It's the most fun I've ever had," said Martinez as he stood on the field amid the outbreak of joy that swept over the players and folks from Dawson.

"I'm trying to hold back the tears."

There they were, the Dawson kids, embracing the moment and each other after winning the Class 2A DII Area round playoff game at Palestine Westwood's Panther Stadium Thursday night.

No one wanted to let go. That's how good this 34-22 playoff win over Mt. Enterprise felt.

The Dawson kids weren't just in the playoffs, they were rolling -- pushing forward with a no nonsense grit that defines the team and the town.

It seemed everyone was there on the turf, where the fans had come pouring out of the stands after the game --- the mamas and daddies, Grannies and Papas, brothers, sisters, friends and friends of friends. The kids posed for a photo, holding babies and trophies and dreams in their hands.

The night belonged to Dawson.

The victory sends the Bulldogs to the third round of the Class 2A DII playoffs next week against the winner of the Muenster-Lovelady game.

Only two teams in the last 60 years of football from Dawson had made it this far in the playoffs and no one since 2005.

"It's unbelievable," said Dawson quarterback Brendan Horner, who was talking about his feelings. "We're going to the third round!"

Believe it. This is a football program that had a four-year losing streak a few years ago, but even then during that 43 Friday night nightmare, the folks in Dawson supported the team, and stood by the kids.

Horner knows that, and he knows it's a big part of Dawson's magical story. Of course, there's no magic, just hard work and discipline -- and the kind of bond every team dreams of having.

That fight and drive lives in every Dawson huddle for a team that should wear blue collars on the uniforms, and it was never more evident than in Dawson's put-the-game-away drive in the fourth quarter -- a gritty, grind it out 51-yard march in 11 plays that took 5:41 off the clock and ended Mt. Enterprise's season.

Horner, who rushed for 111 yards and scored on a 3-yard run just before halftime, fought his way for 38 of the 51 yards on seven carries on that final drive, including a tough 1-yard run on a fourth-and-one at the 26, where he kept the drive alive with a final push.

And Horner had the best run of the drive when he bounced off a tackle in the backfield and then broke another one with a two-steps-up, one-step back move that sprung him for a 14-yard run to the 3-yard line.

Jakoby Moore, a senior who has done it all at Dawson, topped off a huge night when he raced around the right side for a 2-yard TD with 3:06 left to lift Dawson to a 32-22 lead. Then the Bulldogs added two points with one Moore run by Jakoby to make it 34-22.

Moore, who gained 69 yards on eight carries, scored three times Thursday. He ignited the night with a 35-yard punt return that gave the Bulldogs a 14-6 lead with 2:06 left in the first quarter, and he followed that with a 29-yard TD run moments later to make it a 20-6 game with 11:10 left in the half.

But his final TD capped off Dawson's most important drive of the season. The Bulldogs had two long drives end in fumbles in the Red Zone in the third quarter, and hadn't scored in the second half when they began the clinching drive with 8:57 left, clinging to a 26-22 lead.

"On that drive we ran the same play over and over," Dawson coach Ronnie Striplin said. "It's called Middle-Lane. It's straight up the pike. That's the first play we installed in the offense when I got here three years ago."

That was the beginning of the end of losing for Dawson, because when Striplin arrived he changed everything from the playbook to the culture and turned a losing program upside down -- driving the kids and the program straight ahead to success right down the Middle Lane.

The Bulldogs, who are in the playoffs for the second year in a row, have now won 15 games in the last two years and are 10-2 as they head to the next round of the playoffs.

"I don't know a lot about the historical stuff," Striplin said. "But I don't think there's a whole lot of teams at Dawson that have won 10 games."

The Bulldogs never trailed in a game that was full of tension Thursday.

Horner got things going when he ran for 30 yards on the first drive of the night, a quick 44-yarder in nine plays that started when Martinez, a two-way starter who was brilliant at linebacker and a big part of the offensive blocking all night, grabbed Dawson's opening kickoff to Mt. Enterprise on a high bounce before the Wildcats knew what hit them.

The Bulldogs spent the rest of the night trying to stop Mt. Enterprise quarterback Kendre Miller, who had rushed for more than 2,500 yards and 30 of the Wildcats' 40 touchdowns before Thursday's Area round playoff game. He led the Wildcats to a district title and a 10-1 record and led them in their final game.

"He's a great player," said Striplin with respect pouring out with those words.

He also threw a 56-yard TD pass to Derrick Jackson with 1:38 left in the half to close the gap to 20-14. Miller would have had another TD pass to Jackson in the second quarter but Dawson's Isaiah Johnson came out of nowhere and made the defensive play of the game with a flying interception of Miller's 47-yard pass at the 2-yard-line to save a TD with 30 seconds left in the half.

The Bulldogs had just taken a 26-14 lead with 51 seconds left when Horner scored on a 3-yard run that was set up by Da'Mariyea Hamilton's amazing 55-yard run to the Wildcat 5-yard line.

Hamilton raced around the left side, broke a tackle and headed back across the field covering more than 70 yards on the play as he slipped by and past everyone with a run that looked like it came right out of a Bugs Bunny cartoon.

It was one of several big play moments for the Bulldogs on a night that belonged to Dawson -- a night that felt so special it made folks have to hold back the tears.