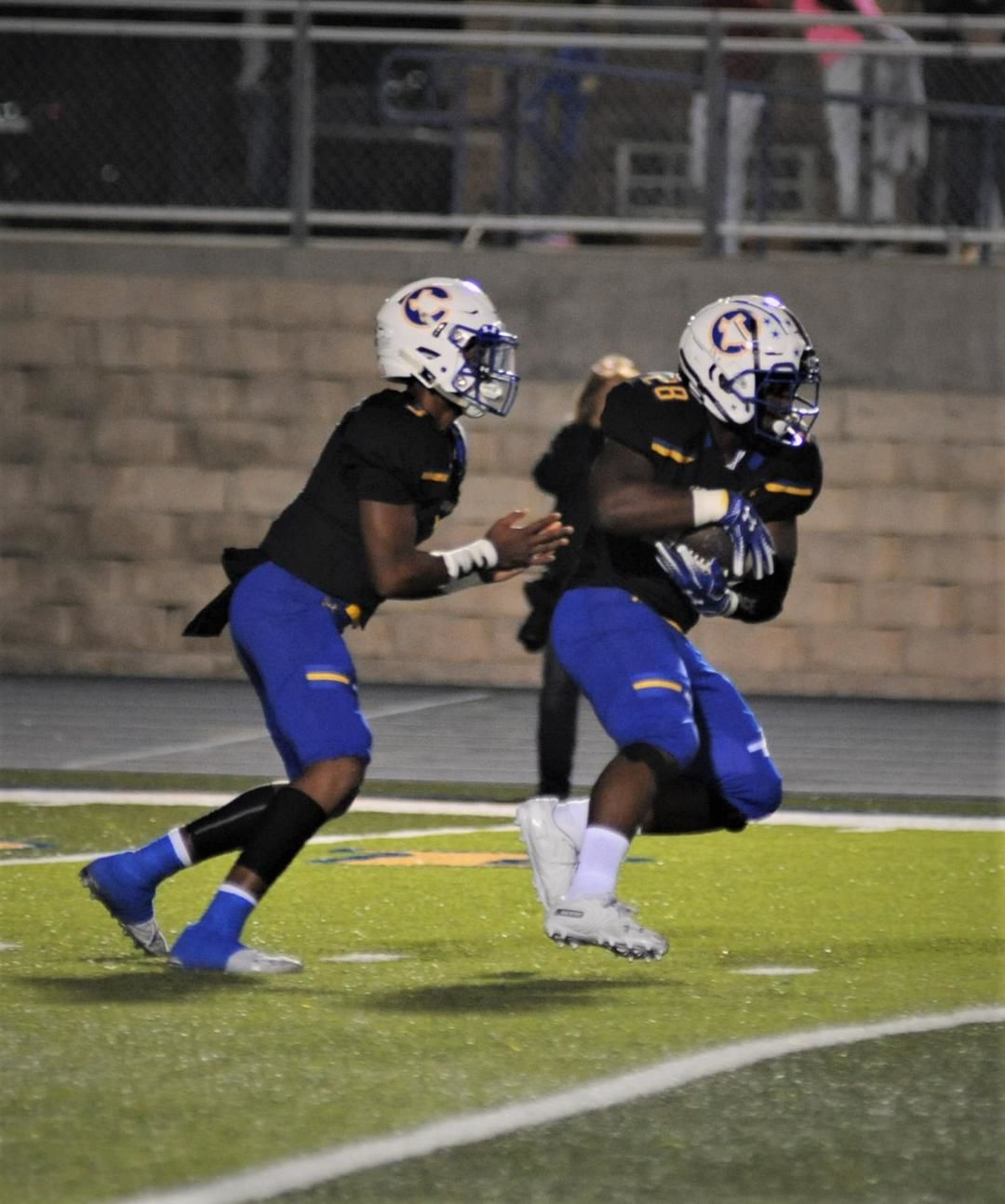 Solomon James (left) and Anthony Young led the Tigers offense in 2019. They both return along with running back Da Da Daniels for a Tiger offense that will now have Brad Skinner as its offensive coordinator 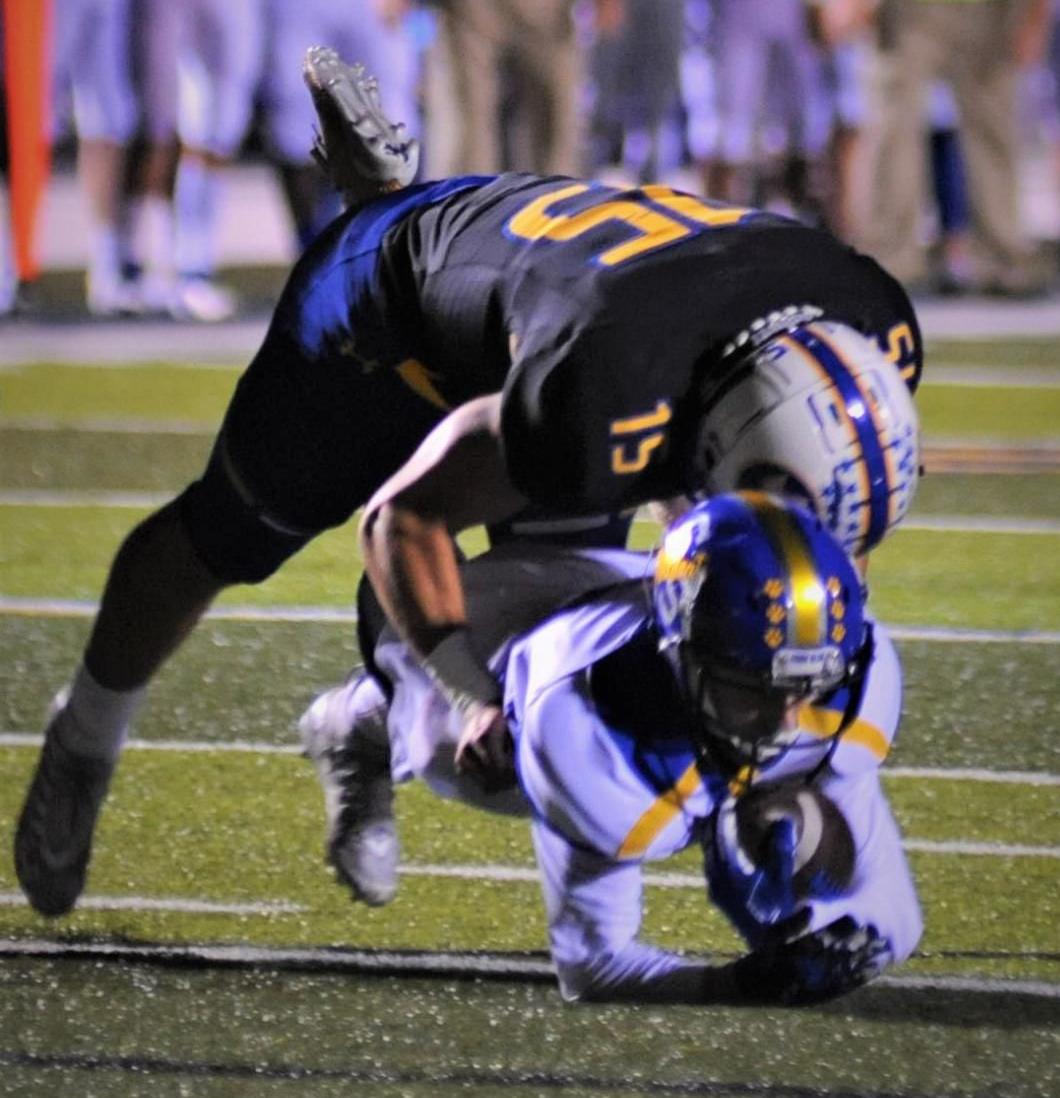 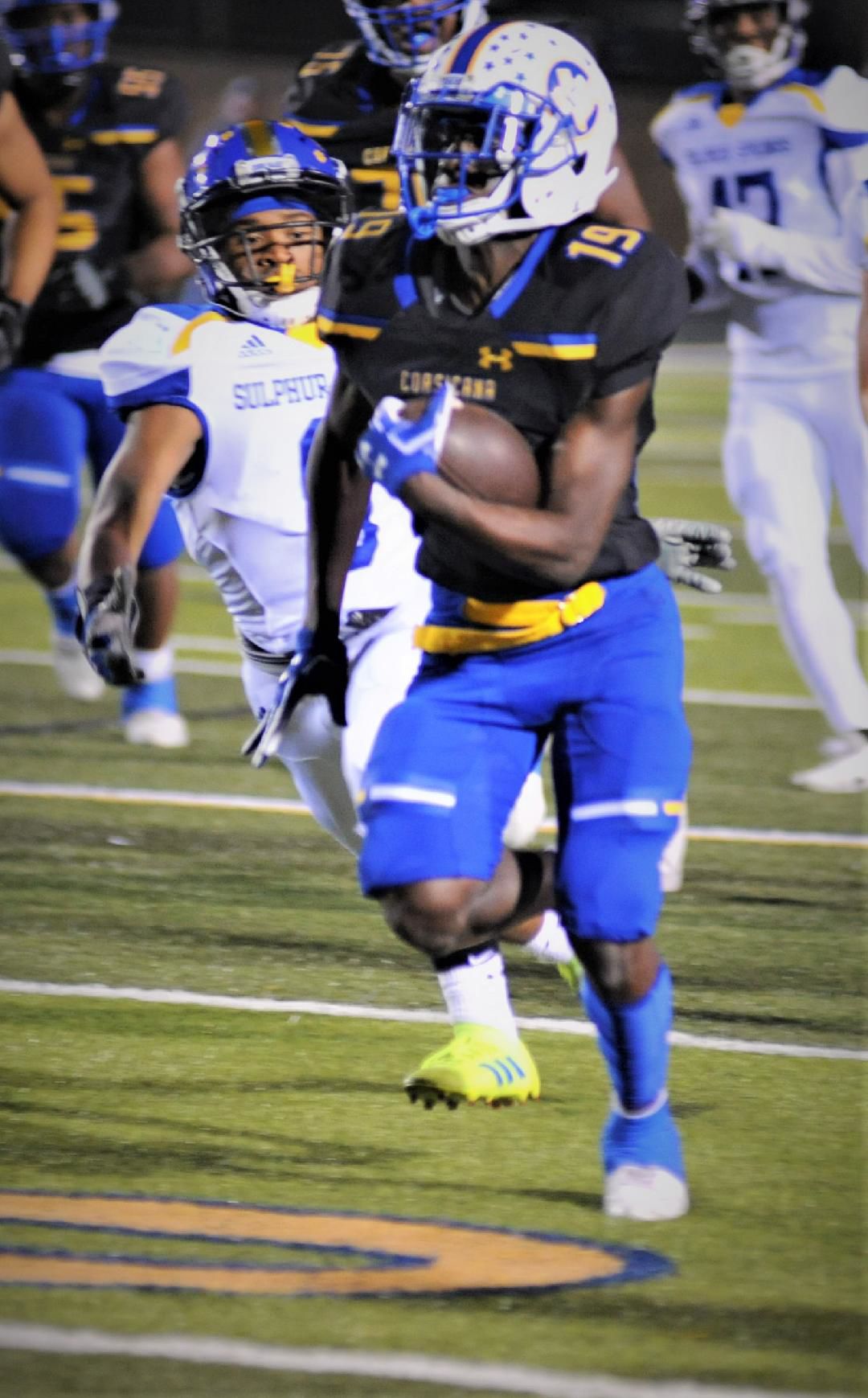 Damaruius "Da-Da" Daniels takes off on a 55-yard TD run against Sulphur Springs. 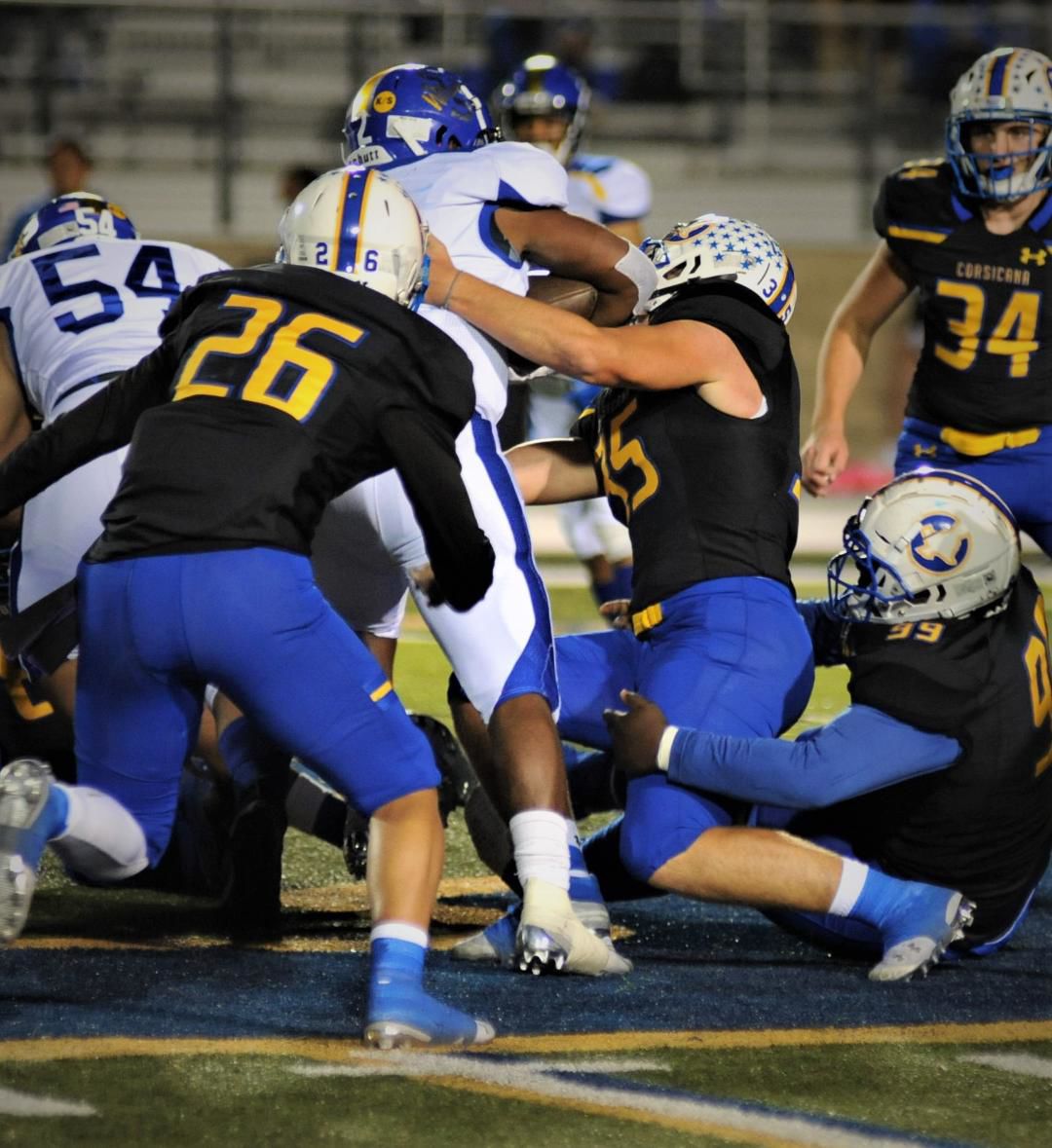 Grant Harrison (35) and Chris Degrate (26) makes life miserable for the Wildcats on this play against Sulphur Springs. 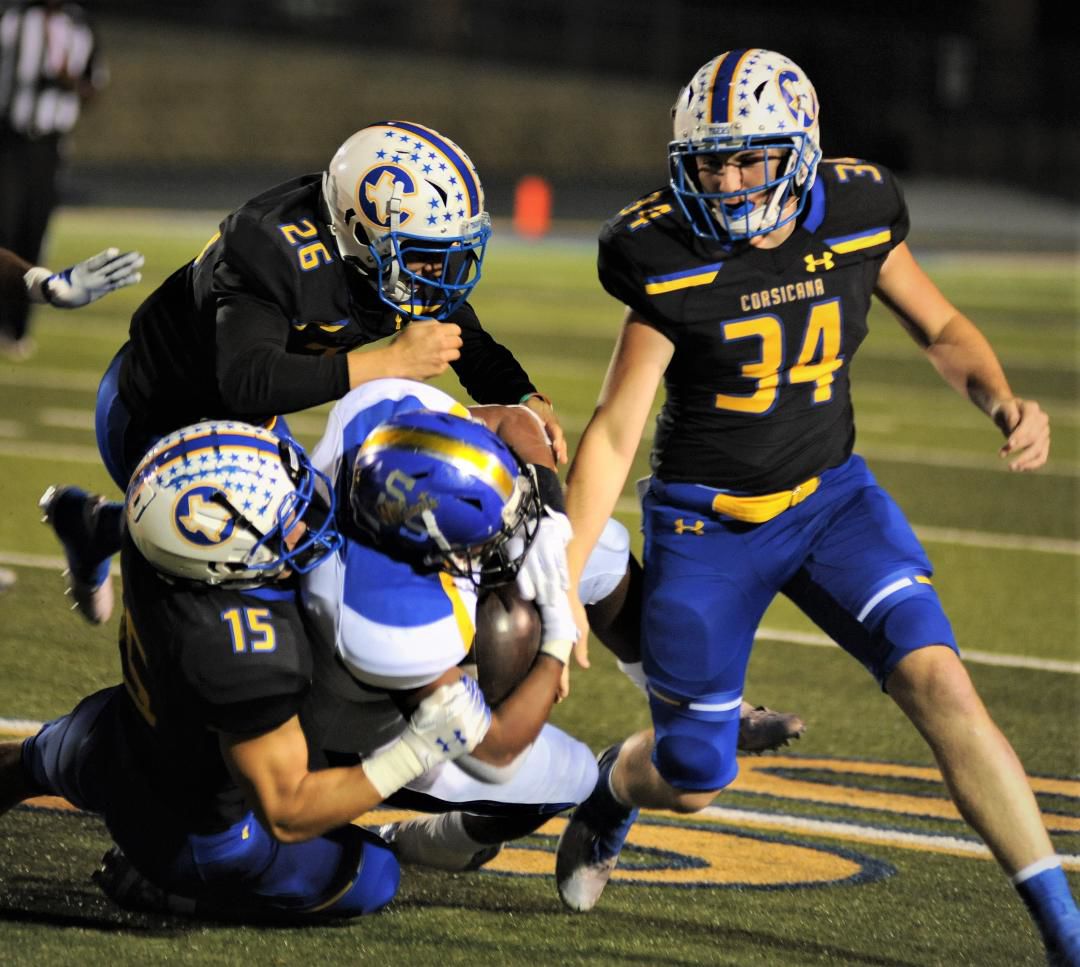 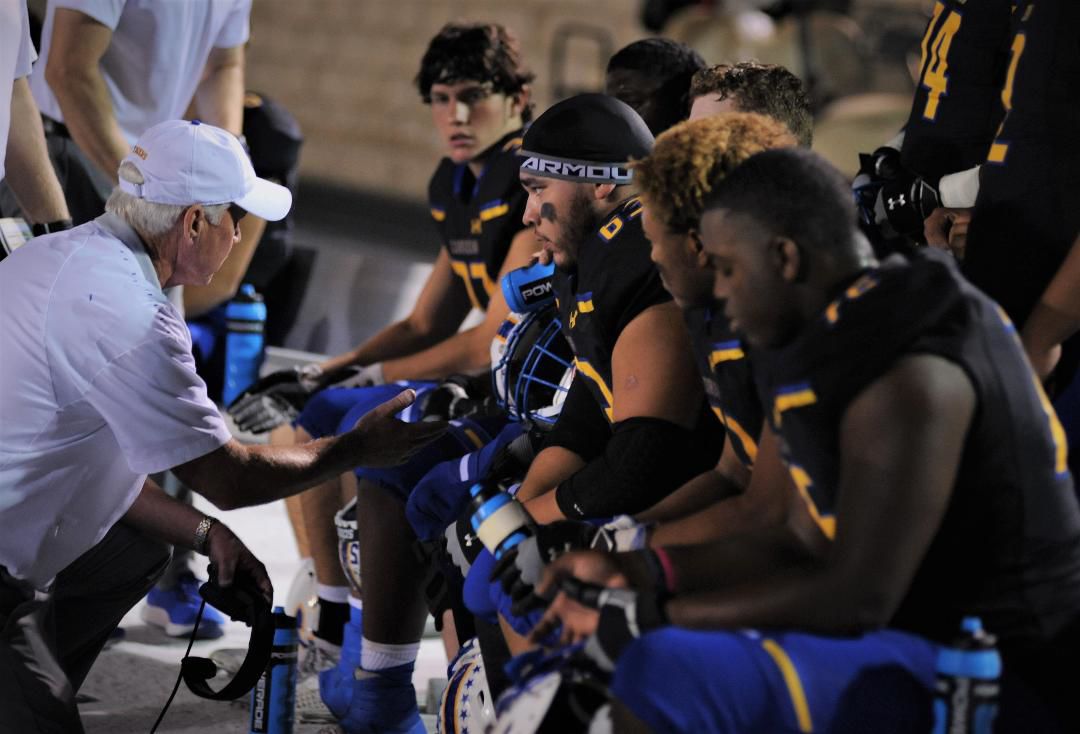 Tigers coach Hal Wasson, seen here giving his kids some encouragement on the sidelines during their impressive 41-14 win over Sulphur Springs last season, has hired Brad Skinner as the Tigers offensive coordinator, offensive line coach and strength and conditioning coach.

Solomon James (left) and Anthony Young led the Tigers offense in 2019. They both return along with running back Da Da Daniels for a Tiger offense that will now have Brad Skinner as its offensive coordinator

Damaruius "Da-Da" Daniels takes off on a 55-yard TD run against Sulphur Springs.

Grant Harrison (35) and Chris Degrate (26) makes life miserable for the Wildcats on this play against Sulphur Springs.

Tigers coach Hal Wasson, seen here giving his kids some encouragement on the sidelines during their impressive 41-14 win over Sulphur Springs last season, has hired Brad Skinner as the Tigers offensive coordinator, offensive line coach and strength and conditioning coach.

The Corsicana Tigers responded to their first district loss of the season in a big way, wearing down and running over the Sulphur Springs Wildcats, 41-14, on homecoming night at Tiger Stadium.

Anthony Young ran for 145 yards and a touchdown, while Damarius Daniels added two touchdowns as the Tigers rolled up 441 yards of offense on the night.  Solomon James added 161 yards and two scores passing as the Tigers used a dominant second half to pull away from the Wildcats.

In the second half alone, Corsicana rushed for 151 yards and threw for 72 yards more while holding Sulphur Springs to only 93 yards of total offense.  The Tigers outscored Sulphur Springs, 20-0, in the half to break open a close game.

Early on, the Tigers seemed to be experiencing a little bit of an effect from last week’s loss, especially on offense.

Fortunately for the Tigers, Corsicana would win the other two phases of the game – defense and special teams – while waiting on the offense to dominate.

After the defense forced a three-and-out by the Wildcat offense to begin the game, and the offense struggled with their own three-and-out, the Corsicana special teams set up the first score of the night when punter Tanner Kidd boomed a 55-yard punt to pin the Wildcats deep in their own territory.

James would lead the Tiger offense down the field in six plays, with Young scoring from 12 yards out, giving Corsicana a 7-0 lead midway through the first quarter.

After holding the Wildcats on downs at midfield, the Corsicana ground game got going, moving all 58 yards on the ground for the second score of the night, a hard, tackle-breaking 12-yard run by Daniels over the right side of the offensive line.  The extra point by Ethan Rodriquez pushed the Corsicana lead to 14-0 at the end of the first quarter.

Despite only one win on the season, the pesky Wildcats would respond with a touchdown drive of their own, holding the football for 13 plays to cover 75 yards.  Da’Korian Sims would end the drive with a 10-yard touchdown early in the second quarter to cut the Tiger lead to a touchdown, 14-7.

After a failed onside kick and a penalty by the Wildcats, Corsicana had great field position just over midfield in Wildcat territory.

Four runs by Young and a catch by Drew Denbow quickly moved the Tigers down the field when, on third-and-ten from the Wildcat 17-yard line, James lofted a perfect pass, just over the outstretched arm of the Wildcat defensive back, into the waiting hands of George Foster in the end zone and another Tiger touchdown.

With the extra point by Rodriquez, the Tigers would regain a two-touchdown lead over the Wildcats, 21-7, midway through the second quarter.

Later in the first half, Sulphur Springs would again cut the lead after a short punt by the Tigers gave the Wildcats the football inside the Corsicana 40-yard line.

Two plays later, Caden Davis would score from five yards out for the Wildcat touchdown, cutting the Tiger lead to one score, 21-14, at the half.

The second half was all Corsicana.

After winning the coin toss and deferring to the second half, the Tigers were set to get the ball to begin the half.

Sulphur Springs again tried an onside kick.  This time, the Wildcats recovered the kick, but the play was nullified by an offsides penalty by the Wildcats.  Corsicana would recover the onside re-kick, giving the Tigers the ball again at midfield.

Corsicana would be forced to punt, but the Tigers special teams would come up big again, recovering a Wildcat fumble on the punt return, giving the Tigers the football at the Wildcat 27-yard line.

After going backwards for two plays and almost losing a fumble, James and Lane Fuentes pulled off the key play of the game, converting on third-and-26, for a 42-yard touchdown pass on a post route that split the safeties.

The score would give the Tigers a two-score lead again, 27-14, and the Tigers never looked back.

The Tiger defense, led by Tyler Farmer, Ja’Braylan Douglas, and Isaiah Cornejo, would take over, shutting down the Wildcat offense and never giving Sulphur Springs a chance to get back into the game.

Corsicana would add two more touchdowns, both in the last six minutes of the game, punctuating a dominating second half.

Daniels would score his second touchdown of the night on a 55-yard run, while James would close out the scoring with less than a minute remaining on a 5-yard keeper on fourth down.

With the win, Corsicana improves to 6-2 on the season and 5-1 in District 8-5A DII play, keeping the Tigers very much in the race for the district title with 6-0 Ennis coming into town in two weeks.

But first, Corsicana must travel to 1-4 Forney next Friday night.  Ennis has the week off after blasting Forney, 52-0, at home this week to clinch a playoff berth, before the showdown in two weeks.

Also staying in the thick of the district title race is Royse City, which got a big win Friday night over Greenville, 17-14, to improve to 4-1.  The Bulldogs' only loss this season was two weeks ago at Ennis, 38-21.

Despite the loss, Greenville is still hanging around at 3-2, with a loss to Corsicana in the first week of district play.  At worst, the Tigers can play spoiler with a big game at Ennis to close the regular season.

What this all means is, buckle up, because it is going to be a wild final three weeks in District 8-5A DII, and two wins by the Tigers will give Corsicana at least a share of the crown and a win over their biggest rival.