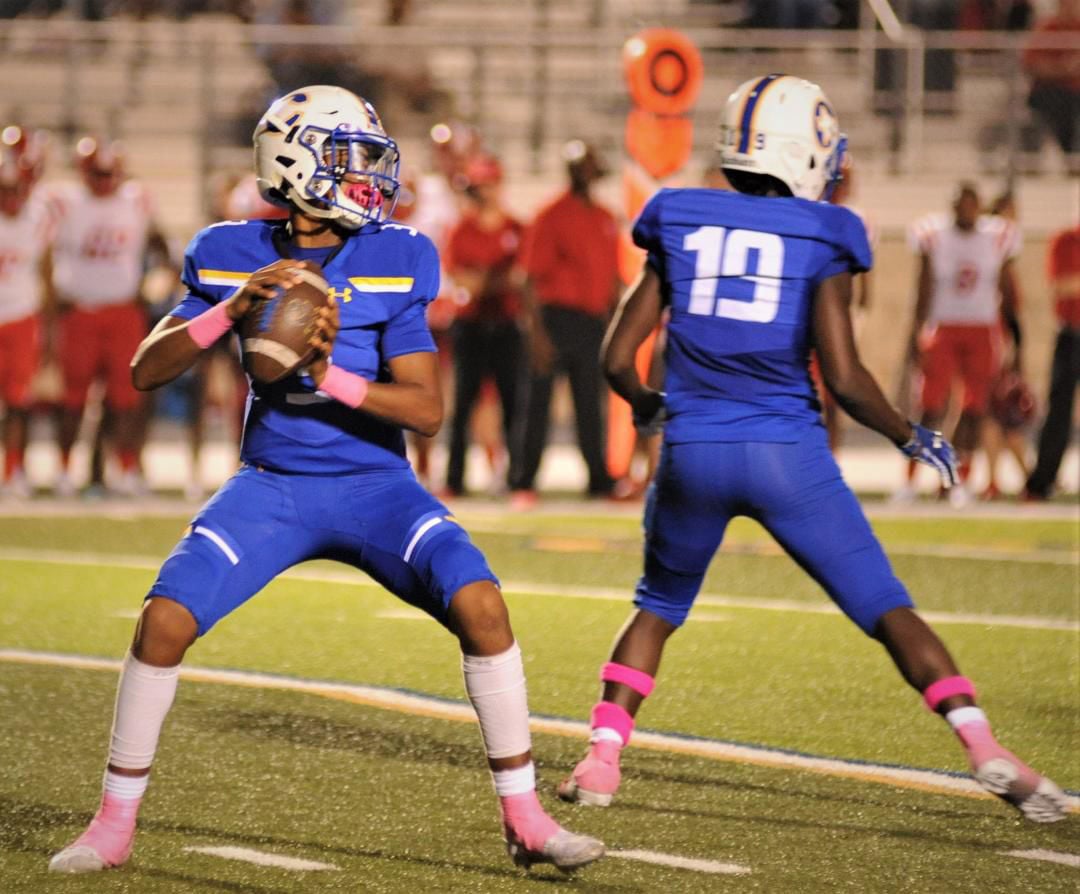 Solomon James (left) has thrown for 1,271 yards and 15 touchdowns this season while Damarius Daniels (19) has rushed for 555 yards and seven touchdowns. 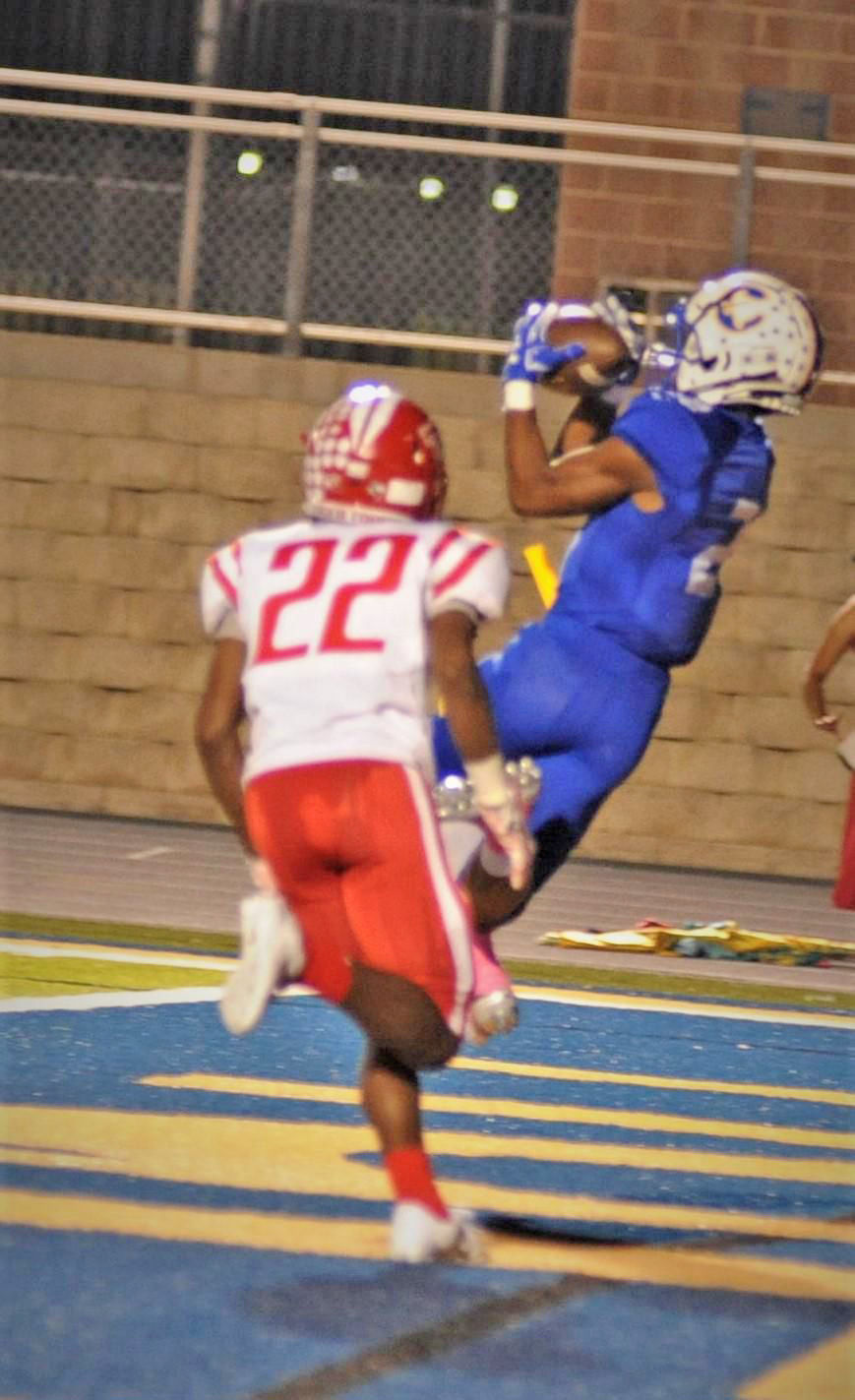 Corsicana’s Savion Miler makes an over-the-shoulder catch for a touchdown in a an earlier game this season. Miller and the Tigers will need to put together their best game of the year when the face Ennis Friday at Tiger Stadium

Solomon James (left) has thrown for 1,271 yards and 15 touchdowns this season while Damarius Daniels (19) has rushed for 555 yards and seven touchdowns.

Corsicana’s Savion Miler makes an over-the-shoulder catch for a touchdown in a an earlier game this season. Miller and the Tigers will need to put together their best game of the year when the face Ennis Friday at Tiger Stadium

Corsicana’s Tigers are not just winning (and boy oh boy, are they ever winning) but they are doing it with an offense that defies most high school logic.

Consider this: Almost all high school football teams run the ball far more than they throw it, and the Quarterback Prep type schools that do have D-I QBs usually throw it a lot more than they run it.

Enter Hal Wasson’s Tigers, who are putting on a balancing act rarely seen on Friday nights.

The Tigers have won five in a row and are tied with Ennis at 3-0 atop the District 8-5A DII standings.

But look at the way they win.

Wasson’s offense has rushed for 1,271 yards this season and has thrown for 1,234 yards.

That's spreading the wealth for the Tigers, and a nightmare for any team facing the Tigers.

And to make the equation even more fun, Wasson says his team hasn’t even reached the place he envisions for this season.

The balance was pretty evident on Friday when quarterback Solomon James threw for 250 yards and the offense produced 189 yards on the ground.

All of James’ numbers came in the first half and almost all of the rushing yards came before halftime in the Tigers 42-7 romp over Terrell.

The only points the Tigers scored in the second half came when Ja’Braylan Douglas picked off a pass and returned it 28 yards for the team’s first defensive touchdown of the year.

Wasson played backups for most of the second half, and that’s standard procedure for the Tigers, who used the same formula in their 40-7 win over Kaufman earlier this season.

This was James’ best performance (at least statistically) since opening night, and he was coming off a big clutch drive against North Forney the week before when he drove the Tigers 75 yards in the final minutes and connected with Drew Denbow for an 8-yard touchdown with 46 seconds left to beat the Falcons 27-24 in Forney.

James completed 3-of-4 passes on that final drive for 56 yards, including two clutch plays. Facing a third-and-nine from the Tiger 27, he hit Qua Chambers with an 11-yarder for the first down, and on the next play he found George Foster for a 37-yard play to move the ball to the Falcon 25.

If you add along, that means James has completed 15 of his last 21 passes for 305 yards and four touchdowns.

And if you like the theme of balance, look at this: Those four touchdown passes went to four different receivers.

Denbow caught the game winner in Forney. Then on Friday against Terrell Savion Miller made a picture-book over the shoulder catch for a 10-yard TD, Lane Fuentes caught a 51-yard catch-and-run TD and Foster caught a 38-yard touchdown pass.

That’s spreading the wealth and the football field with an offense that’s made for balance.

Chambers didn’t catch a TD pass against Terrell but he did have three receptions for 73 yards and he has had a big year already. Chambers has made 15 receptions for 301 yards and four touchdowns.

Miller has 14 catches for 128 yards and Foster, who has emerged in the past four games, now has a dozen receptions for 202 yards and five touchdowns over that stretch.

Denbow, who is a big-play target who plays both ways and is a force in the secondary, has made three catches for 76 yards, and two of those went for touchdowns.

Denbow made the biggest play of the night against Terrell when he ran down a receiver, who had broken free and was headed for a 98-yard touchdown.

Denbow was more than 10 yards behind the receiver, but he just kept closing ground and made the tackle at the 22, where the Tigers held Terrell on downs.

Fuentes is perfect for Wasson’s offense. He’s quick with great hands and drives opposing coaches nuts when they watch him on tape. He made five receptions against Terrell and leads the Golden Circle with 30 receptions for 552 yards.

But opponents can’t just prepare for James and his possie of targets.

Teams have to stop the run to have a chance, and the Tigers’ explosive offensive line that has been blowing teams off the field, and the emergence of Damarius “Da-Da” Daniels has made it difficult to stop Wasson’s offense.

Daniels joined the backfield in the second game of the season and has rushed for 555 yards and seven touchdowns, including two in the first half against Terrell.

That kind of running will keep teams honest — and so will Corsicana’s balancing act.