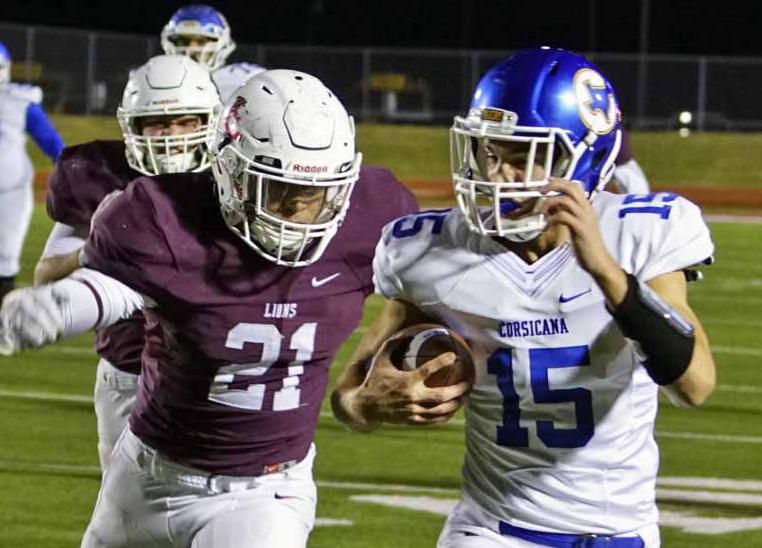 Corsicanna's Drew Denbow (15), seen here on a 33-yard catch-and-run play vs. Ennis last season, made TD catch on fourth down from Solomon James with 46 seconds left to lift the Tigers to a thrilling 27-24 win over North Forney. 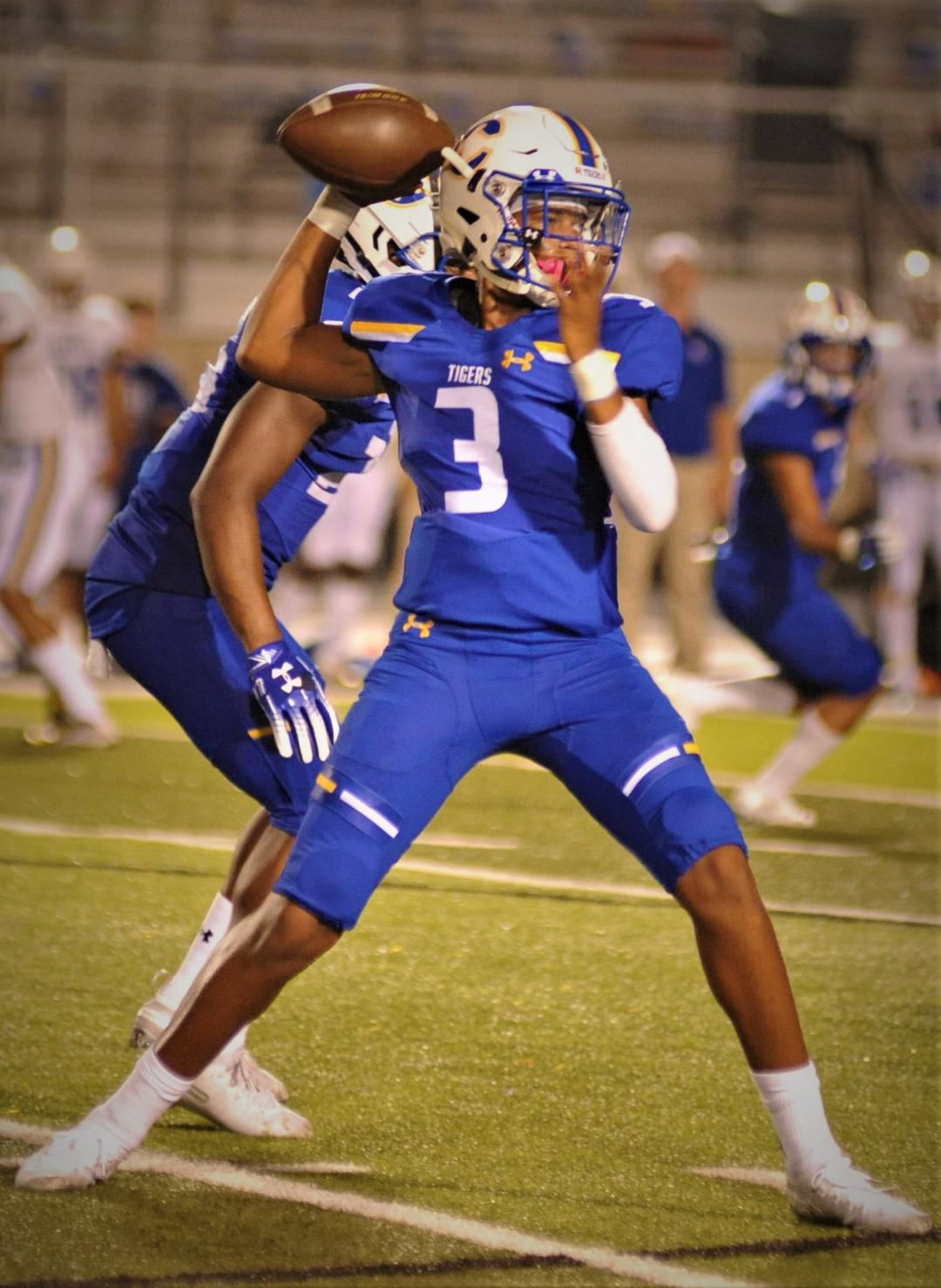 Solomon James, seen here in an earlier game, threw a fourth-and-goal TD pass to Drew Denbow with 48 seconds left to beat North Forney 27-21 and keep the Tigers unbeaten (3-0) in the District 8-5A DII race.

Corsicanna's Drew Denbow (15), seen here on a 33-yard catch-and-run play vs. Ennis last season, made TD catch on fourth down from Solomon James with 46 seconds left to lift the Tigers to a thrilling 27-24 win over North Forney.

Solomon James, seen here in an earlier game, threw a fourth-and-goal TD pass to Drew Denbow with 48 seconds left to beat North Forney 27-21 and keep the Tigers unbeaten (3-0) in the District 8-5A DII race.

FORNEY -- Hal Wasson stretched his arms out, all the way out -- reaching for the ends of the earth.

But everything he wanted was right in front of him.

There they were, the entire Corsicana Tiger football team, rushing to meet their coach's arms, all at once, all together, arriving as one.

No one wanted to let go.

"This is one of the biggest wins I've ever been a part of," said Wasson as he stood on the field moments after his Tigers pulled off a spectacular comeback to beat North Forney 27-24 Friday night.

"And I love that it came at Corsicana!"

And the folks in Corsicana love that Hal came home.

This was just his fifth game since he came back to Navarro County to take over the Tigers, but he could have coached 505 games and not had an ending like this one.

His kids (and they are his kids) not only had to storm back in the final seconds to pull this one out, but they had to do it twice.

Facing a second-and-goal at the 10, and trailing by three, Tiger QB Solomon James rolled out and threw a strike to Drew Denbow in the left corner of the end zone with a minute left to lift the Tigers to a 27-24 lead and send the players and the Corsicana crowd into a frenzy. It was wild and loud and crazy -- just the kind of madhouse celebration you dream about.

Turns out, the dream was a nightmare. An official from the far side of the field came running in with a late flag that wiped out everything. "False start," was the call, and suddenly the Tigers' victory was gone and they were facing a second-and-goal from the 15.

Ever been kicked in the stomach? This hurt a lot more.

James scrambled to the 8 and on third down he fired a pass to Lane Fuentes, who was buried in the turf in the end zone by two defenders when the ball arrived. No flag. No call. Just fourth-and-goal from the 8.

Wasson sent out his field goal unit, which would have faced a 25-yarder into a strong, swirling wind. Then he took a time out, and sent his offense back on the field. He was going for it. The team that set a national record two years ago when the Tigers became the first in history to win five games in overtime, was going for the win. There would be no overtime in Forney.

"I never did want to kick a field goal," Wasson said after the game.

He called the same play again -- a play the Tigers put in this week, one that would get Denbow open in the end zone. It had just worked, and now Wasson was rolling the dice again. Can you roll back-to-back 7s? What are the odds?

Better than you can imagine ...

"Perfect," said Denbow. "The pass was perfect. The first one was a great pass, and the second time it was even better. It was a perfect pass, perfect blocking and the perfect call by coach, who drew up the play this week.

If the first celebration was wild and crazy, the second was pure pandemonium.

Denbow, who made the catch with 0:46 left, couldn't celebrate long. He went to the secondary, where he knocked down two passes, including one in front of the end zone in the final seconds to hold off the Falcons, who drove from their 30 to the Tiger 34 before trying a desperate field goal attempt on fourth-and-10 with six seconds left.  The kick never came. The holder fumbled the ball and was smothered.

The Tigers have now won four in a row after a tough opening night loss to No.12 Burleson Centennial, and they're 3-0 in the District 8-5A DII race with a home game coming Friday night against Terrell (0-3).

North Forney, now 1-2 in the District 8-5A DII race after a 3-0 start and two district losses, had only one lead all night -- a 24-21 edge with 5:01 left in the game that came on a two-point conversion pass after Ty Collins' second TD run of the second half.

Collins had a 15-yarder in the third to make it 14-13 after the Tigers blocked the PAT, and a 2-yarder late in the game for the lead that came shortly after Carlos Rodriguez' 27-yard field goal closed the gap to 21-16.

But the Tigers bounced back immediately and drove 75 yards for the winner on a drive that was ignited by James' 11-yard pass to Qua Chambers on a third-and-nine play that moved the ball to the Tiger 38.

Evidently North Forney didn't get the Boswell tape, because Chambers ran the same TD route he burned Boswell with in the fourth quarter three weeks ago, and scored on a beautiful 29-yard TD catch that gave the Tigers a 21-13 lead with 4:08 left in the third.

On the next play after Chambers' clutch first-down catch on the final drive, James found George Foster for one of the biggest plays of the night -- a 37-yarder to the Falcon 25. James was brilliant on the final drive, hitting 3-of-4 passes for 56 and all three throws were as clutch as they can get.

Once James got the Tigers to the 25 on the winning drive, Damarius Daniels broke free for 16 yards to the 9 with just over a minute left to play to set up the winning TD pass.

Daniels sparked the Tigers' first drive in the second half, gaining 48 yards on three carries to go along with Eric Dickson's 24-yard run as they combined to rush for 62 yards on the 76-yard drive that ended with Anthony Young's 4-yard TD run that broke a 7-7 halftime tie and gave the Tigers a 14-7 lead.

It was tense in the first half and North Forney came back and knotted things at 7-7 on a leaping 19-yard TD catch from Jacob Acuna, and appeared to have momentum going to halftime.

"I told them at halftime, I said: 'Let me tell you something. The only way you can have a comeback is if you have a setback, and we had setbacks in the first half,'" he said.

"A lot of that was self-inflicted, and I'm not taking anything away from North Forney. That's really a good team."

After the game, Wasson praised his kids, telling them: "You had to overcome so much tonight … We're spreading our wings now!"