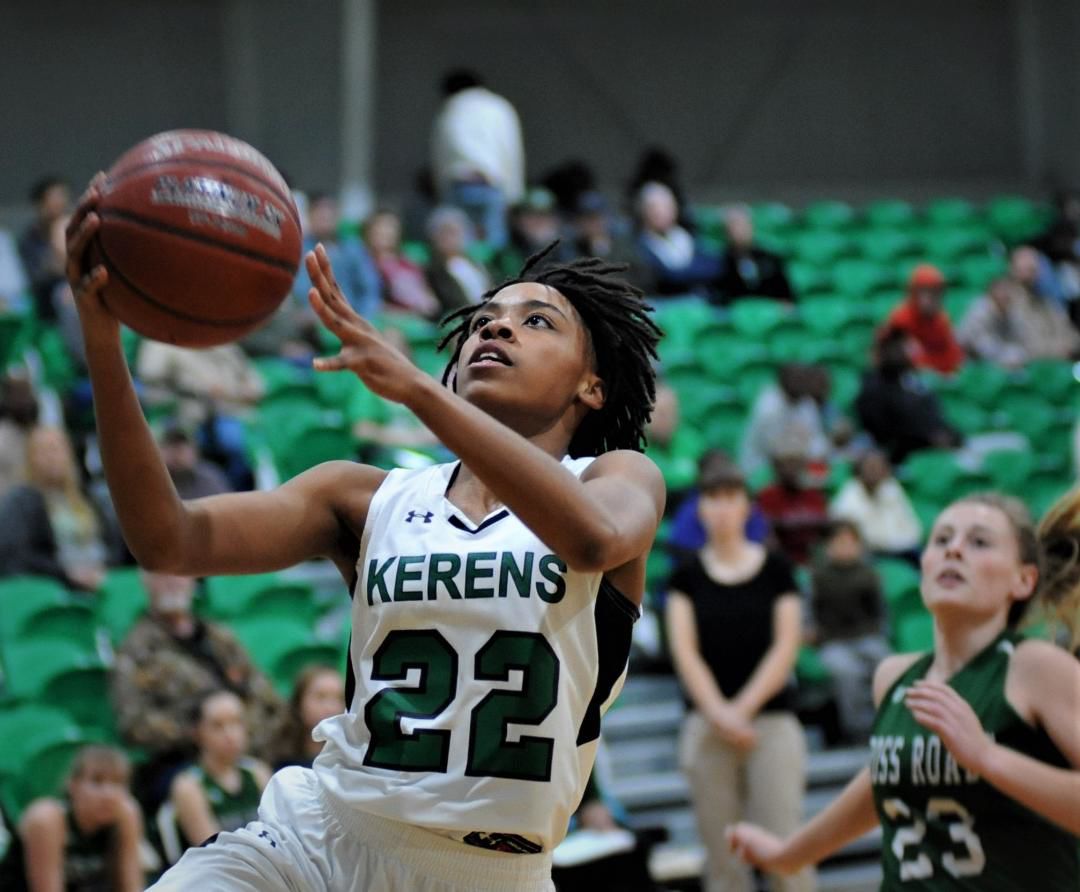 Kerens' Kece Langley is having a monster season 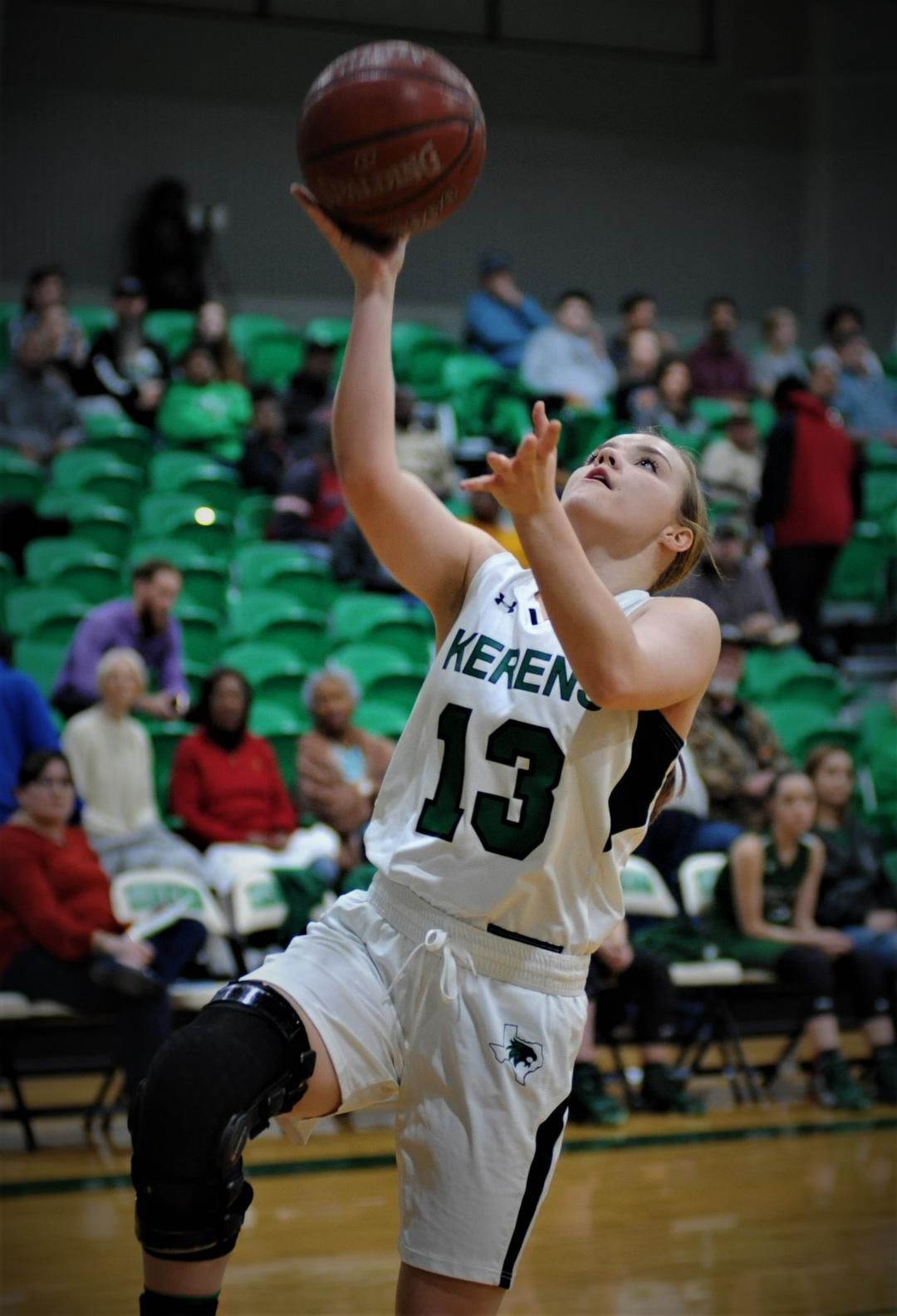 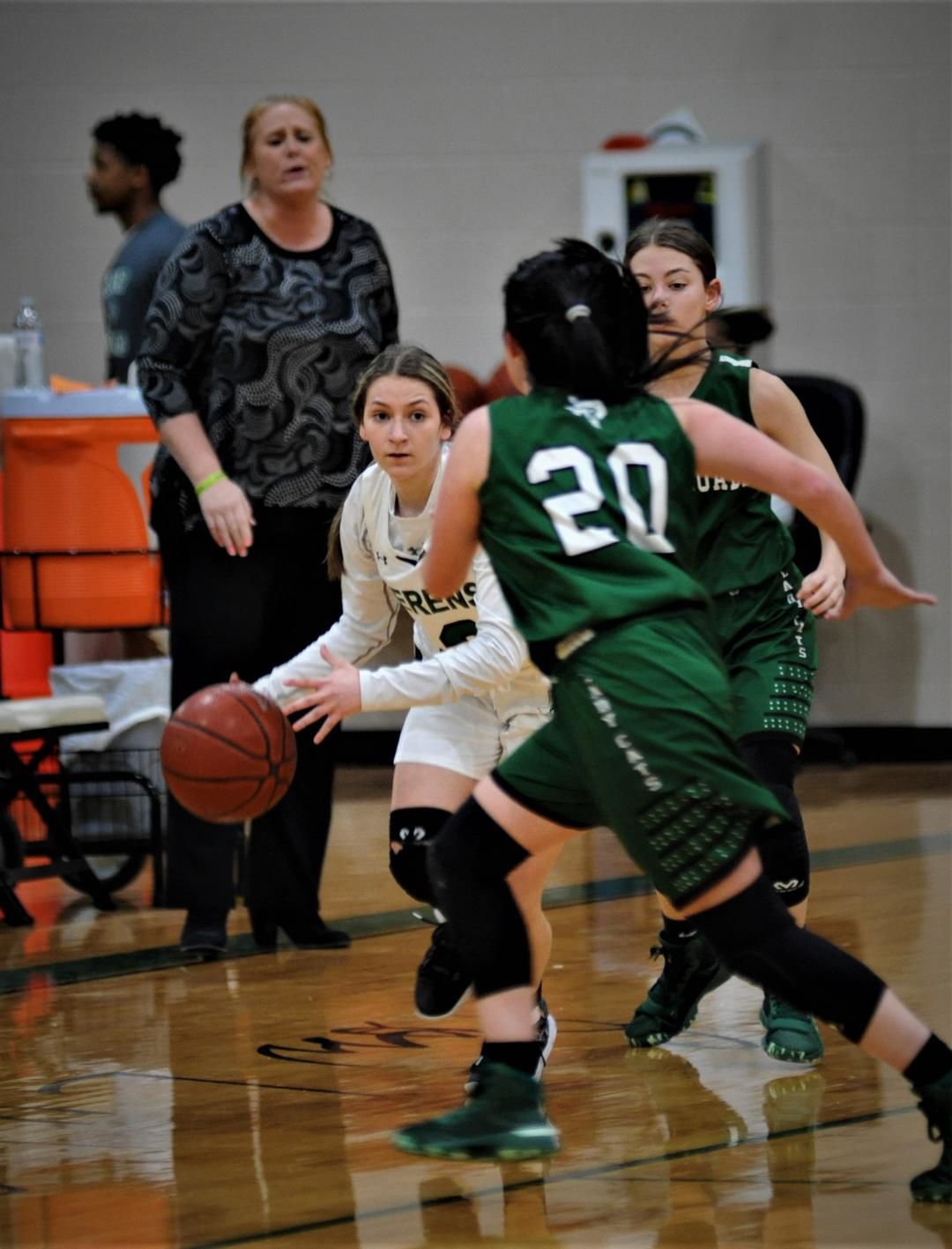 Kerens' Reese Wright, seen here bringing the ball up the court against Cross Roads, runs the offense and is a big reason Kerens is winning this season. 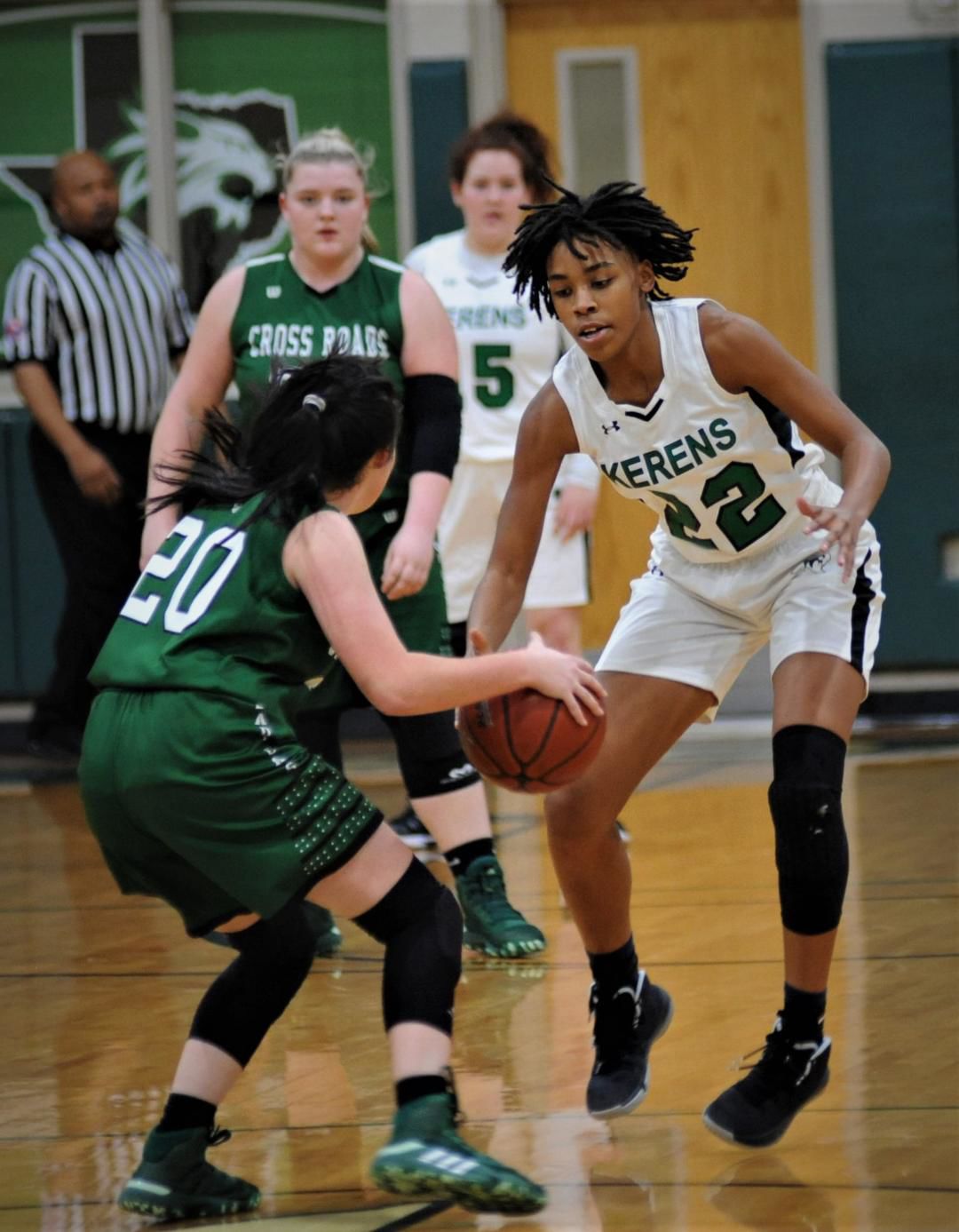 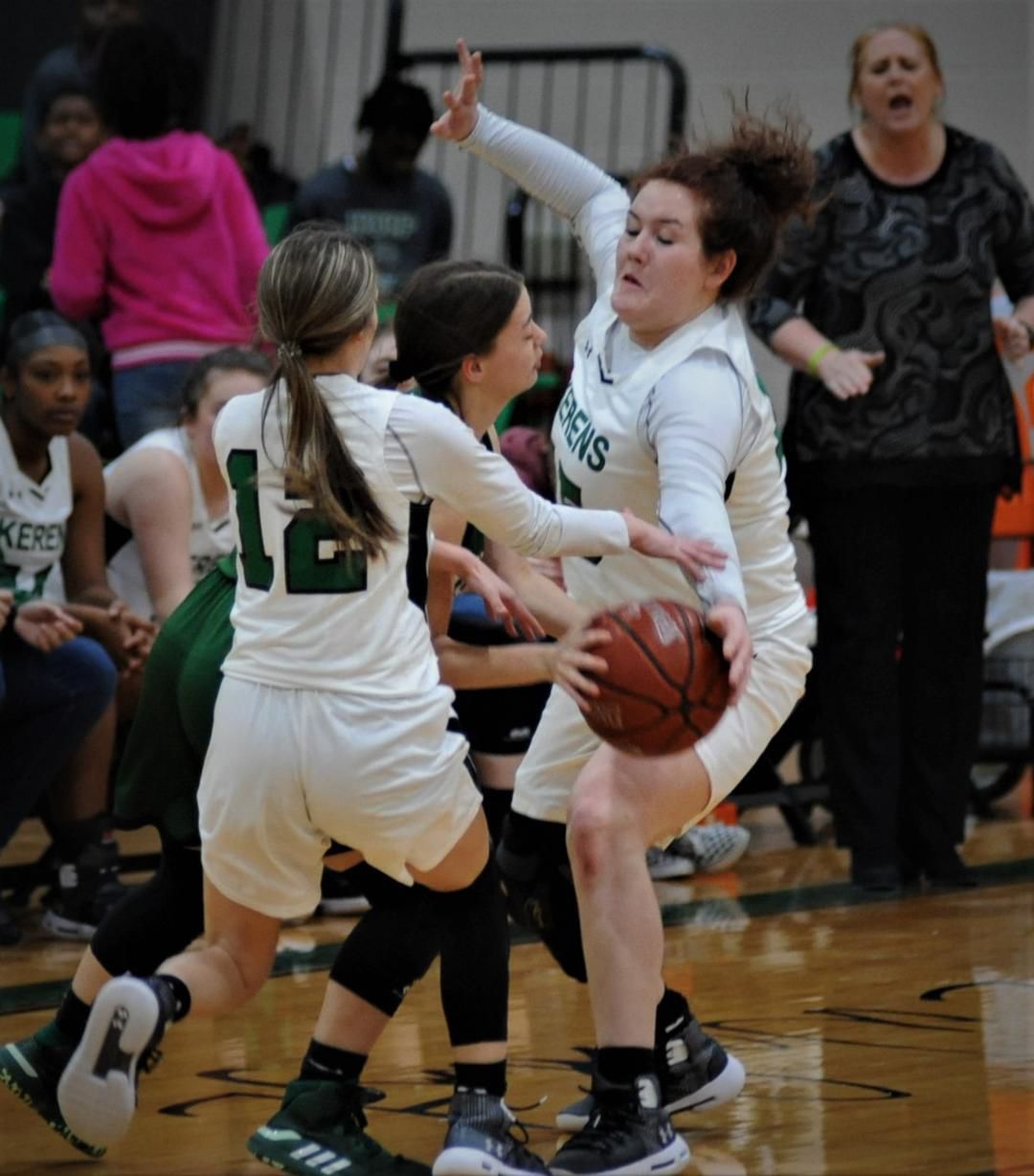 Kerens' Kece Langley is having a monster season

Kerens' Reese Wright, seen here bringing the ball up the court against Cross Roads, runs the offense and is a big reason Kerens is winning this season.

Three girls basketball teams in the Golden Circle are headed for the playoffs as the season winds down.

As the girls teams begin the stretch run of the season and play their final three games the young ladies from Kerens, Mildred and Frost look ready to make their final statements before the playoffs begin on Feb. 17.

Kerens is having a monster season

The Kerens LadyCats have destroyed everyone in the District 19-2 A race and begin play this week with a 7-0 record with first-place wrapped up after winning every district game in a romp.

Just look at what they did to Cross Roads on Friday at Kerens, where the LadyCats were playing short-handed with just eight players. The Lady Cats built a 37-0 lead before Cross Roads scored its first points of the game, and led 40-1 at halftime before coasting to a 65-11 victory.

But Lincoln has another formidable team with the look and hustle and promise of making a deep run in the playoffs.

Kerens has won every district game easily despite playing every girl on the bench. The closest game the LadyCats have had in the district race was a 57-30 victory over Frost.

Alexias McAdams is averaging a double-double with 12 points and 15 rebounds a night. Guards Kaylee Reed and Reese Wright, who both came on strong in the playoffs last year, are running the floor and the offense and having big years as well.

McAdams scored 10 points and had 11 rebounds Friday while Wright ran the floor and played lights-out on defense and scored eight points. Reed made scoring 16 points look easy, hitting three 3's and dropping in a dozen points early in the game.

Langley had 12 points at halftime and dropped in 20 for the night while pulling down a dozen rebounds. Emily Burleson came off the bench and scored in double figures with an 10-point night.

Kerens, which ran away with the Kiwanis Classic title over Teague, is now 23-8 with three games left. The LadyCats  have three games left, beginning Tuesday night on the road against Cayuga. They play their final home game Friday against Itasca and wrap up the season on the road on Feb. 11 at Italy.

Mildred's girls have had a memorable season and after missing the playoffs for four years in a row, the Lady Eagles are headed to the postseason for the second season in a row.

The victory over Scurry-Rosser Friday forged a tie for second with S-R as both teams are now 9-2 in the 18-3A race. Mildred leads fourth-place Eustace (5-6) by four games.

The Lady Eagles have three games left, beginning Tuesday at first-place Malakoff (11-0). They play their final home game Friday against Rice and travel to Blooming Grove on Feb. 11 to close out the regular season.

If you want to know how Mildred has blitzed its way to a 17-6 record and nine wins in a tough district race, the answer is as easy as it is complicated.

The secret? Everybody scores.

Friday's romp over S-R is as good of an example as any as 10 players scored for Mildred, and nobody went off for a 20-point night. The Lady Eagles have some big-time scorers, but on most nights it's a share the ball and share the wealth philosophy.

And while the Lady Eagles are sharing the ball, they are slamming teams with a hustling, in-your-face defense that never slows down.

In other words, Kiser's kids play hard and play to win.

Mildred has done something every team aspires to do -- the Lady Eagles have continued to get better and better as the season has worn on, and have won six in a row and are a team with the stuff to win in the playoffs.

Frost's Lady Bears could have a long list of excuses this seasons as the team has been hit with sickness and injuries that would have demolished confidence of any athletic team.

But not these kids.

Jennifer Cheek has her kids believing they can win -- and proving it night and after night and as Frost heads into its final three games the Lady Polar Bears can reach the playoffs.

They had a big win Friday, beating Italy 37-35 to put themselves right smack in the middle of the playoff hunt, and Cheek knows if Frost wins the final three games her kids are in the post-season.

They're 3-4 in a tight 19-2A race and play key games down the stretch. They face Cross Roads on the road Tuesday, play a crucial game against Cayuga at home Friday night and wrap up the regular season on the road at Itasca on Feb. 11.

"If we win our last three games, we're in," Cheek said. And she believes in her kids.

They were without one of their top players Friday against Italy as Sydney Woods missed the game with an injury, but the Lady Bears found just enough offense to edge Italy by two points and take a lot of momentum into Tuesday's game with last-place Cross Roads.

Jimena Perez led Frost with 12 points against Italy and Kinsley Fuller scored 11 and crashed the boards in the tense and tight game that came down to the final shot.