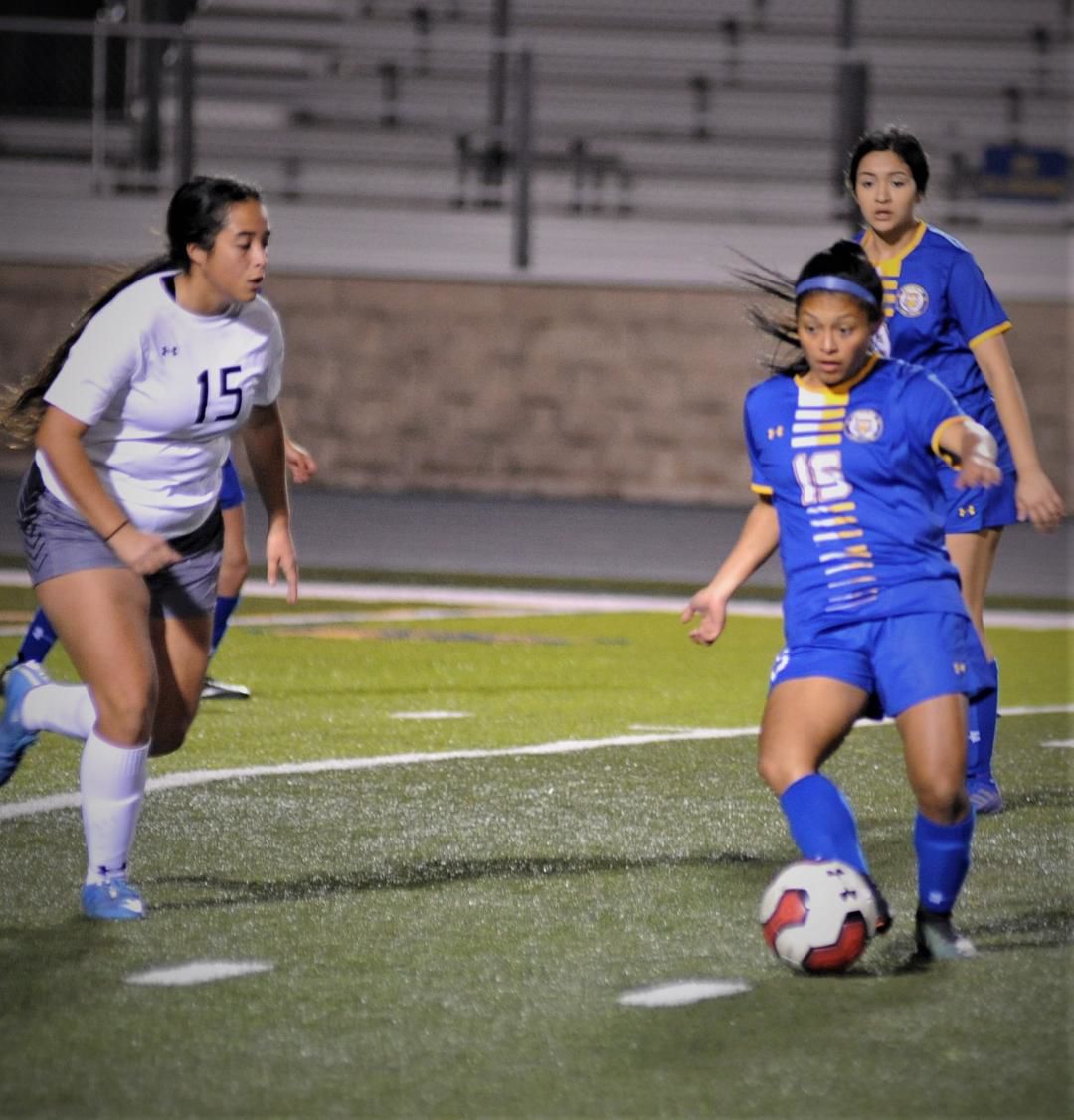 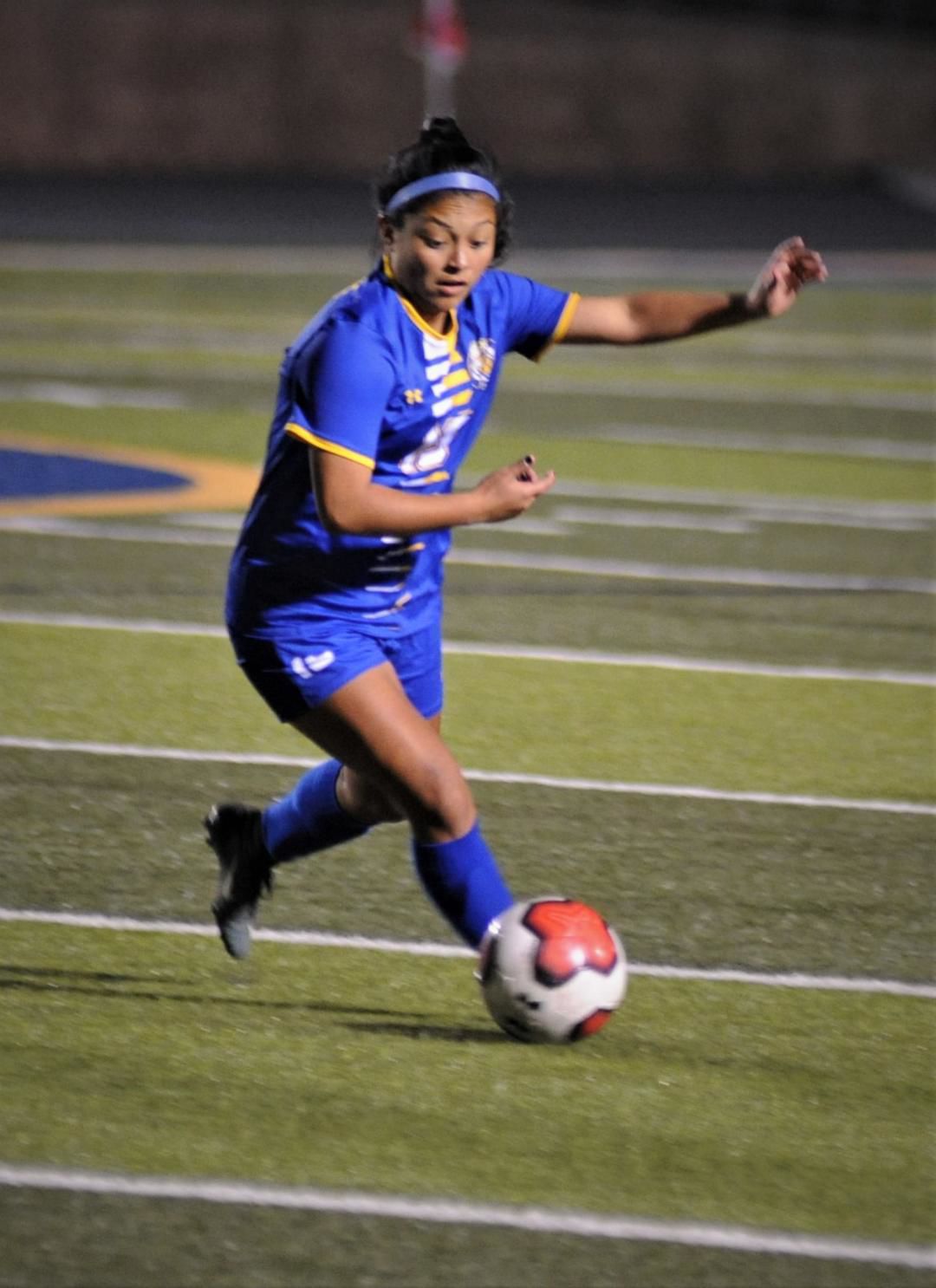 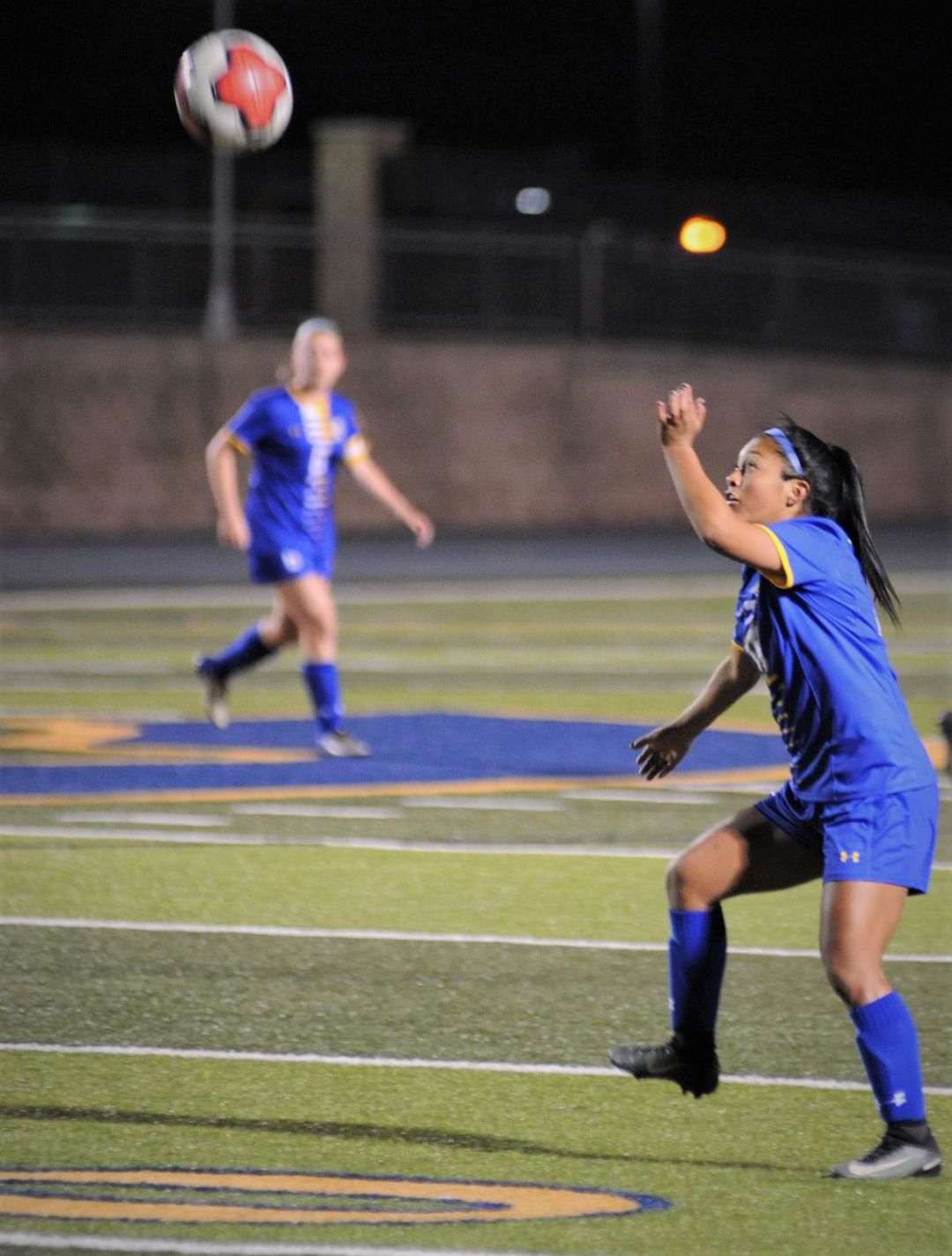 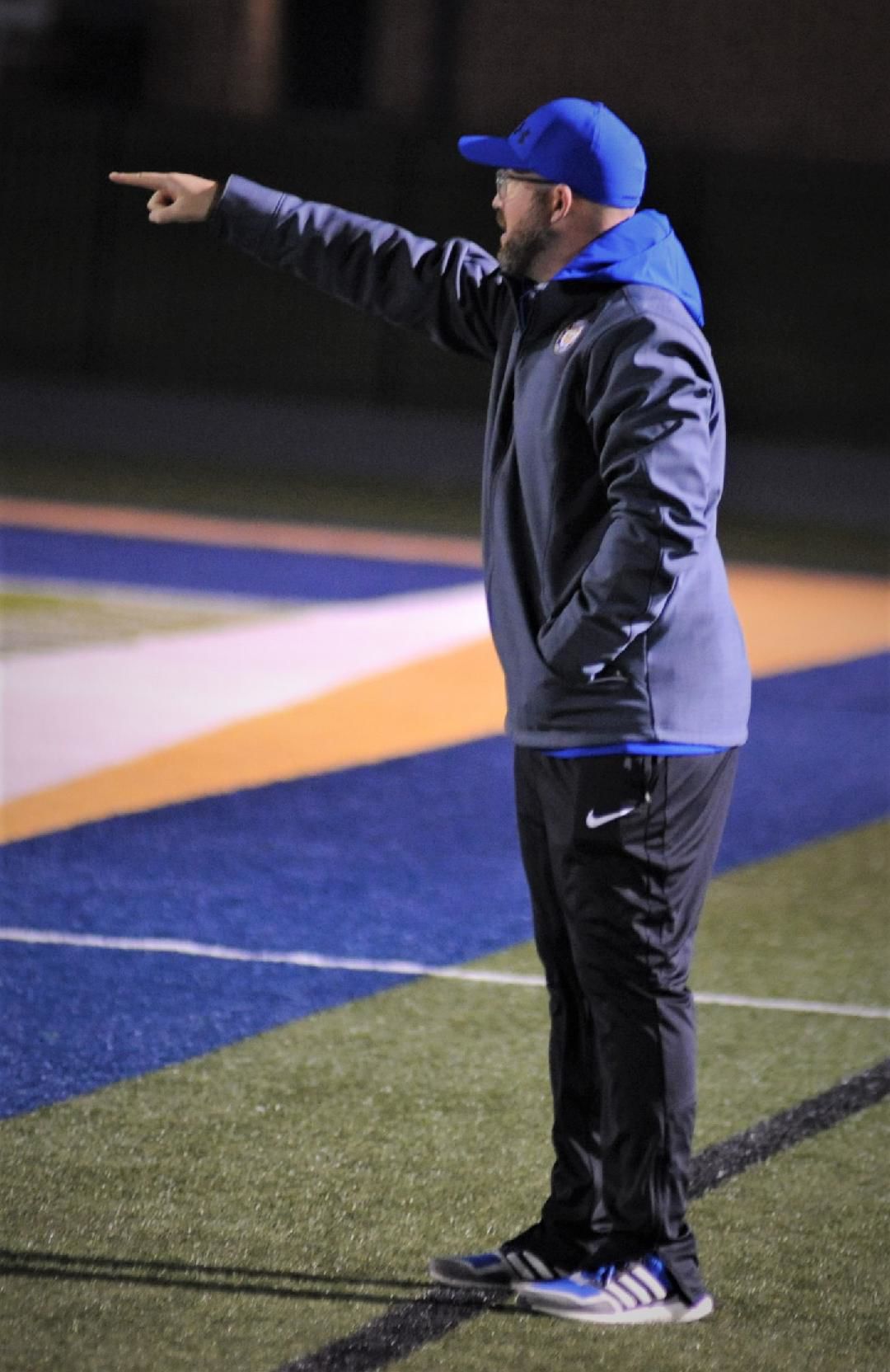 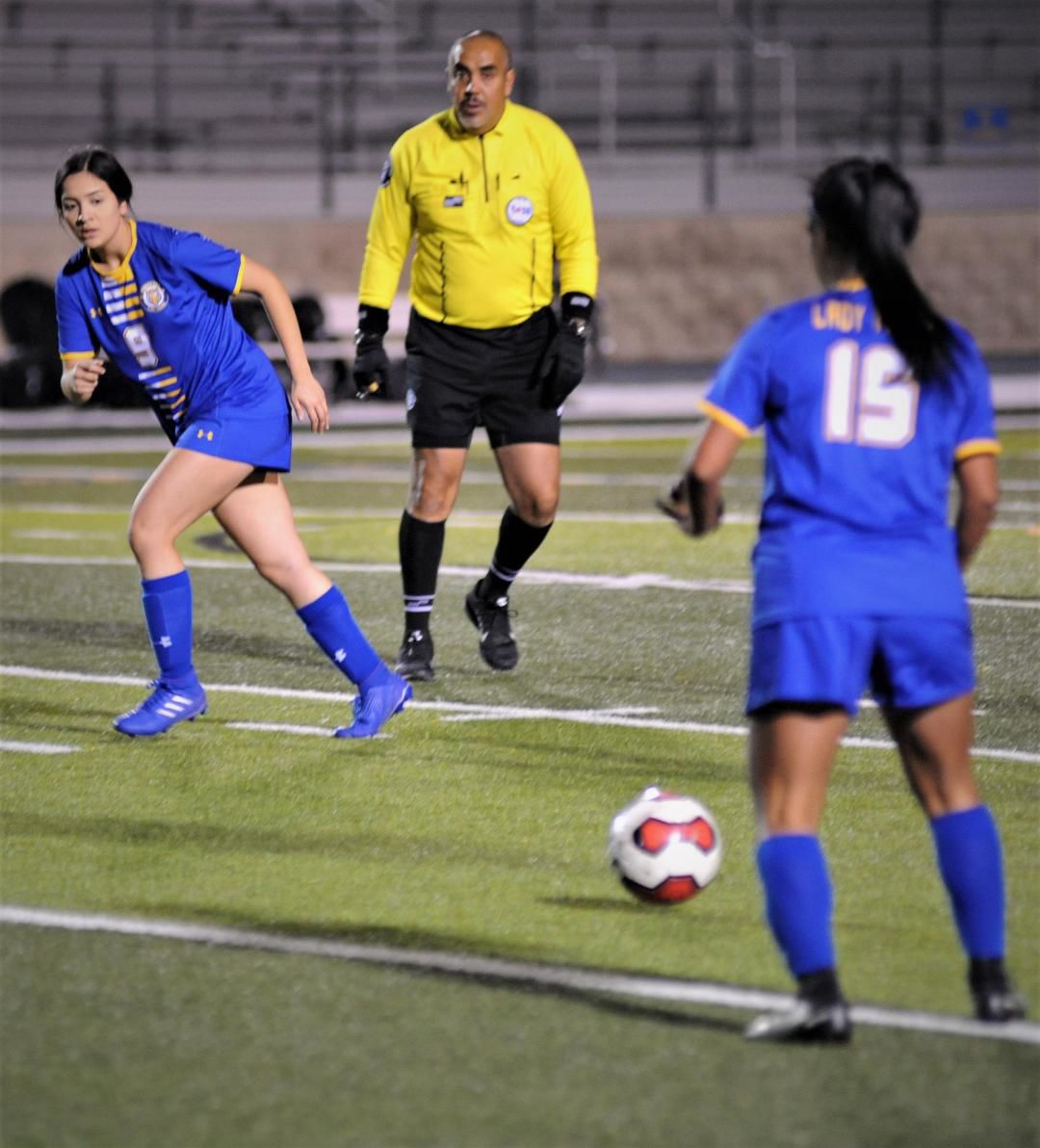 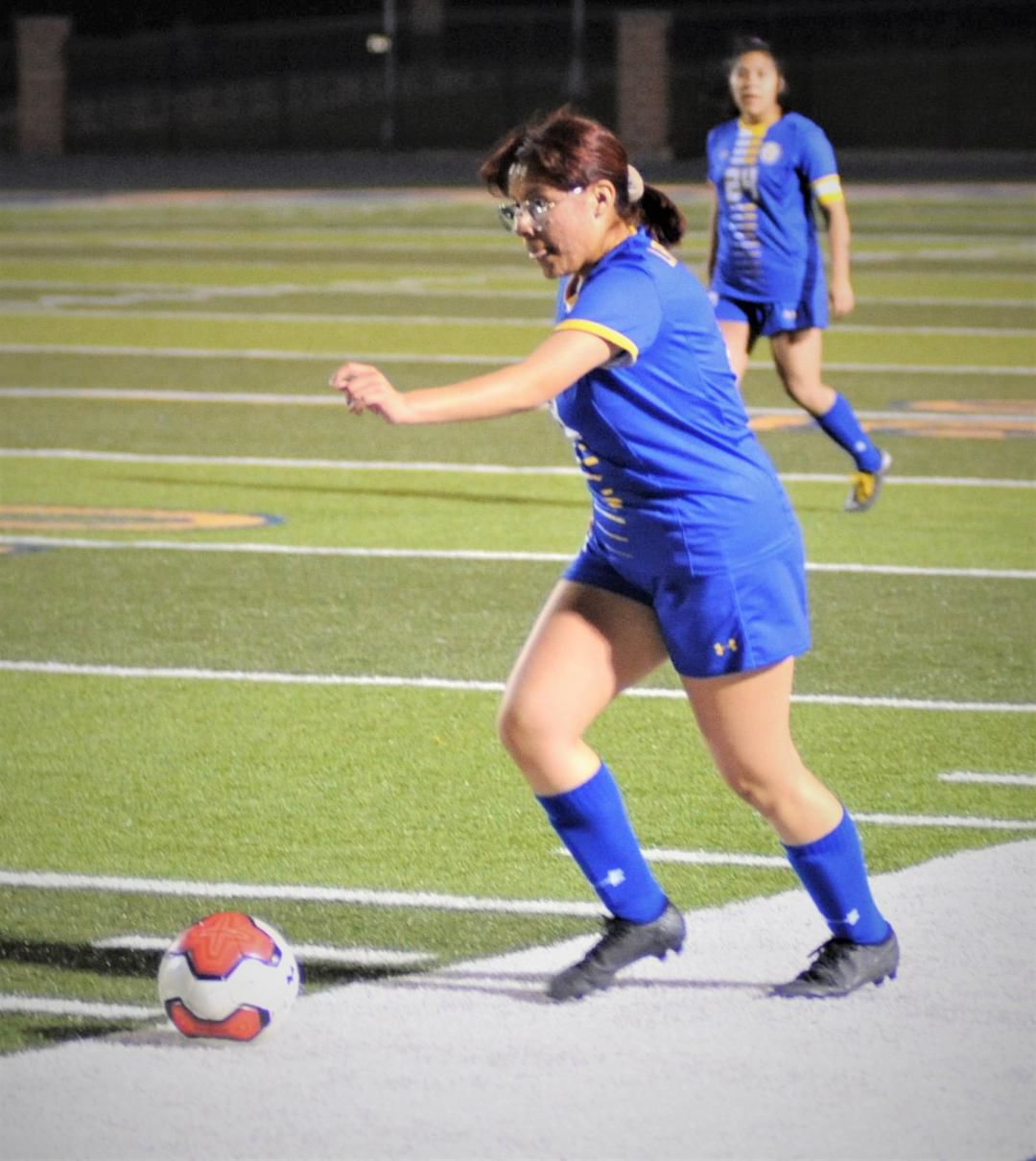 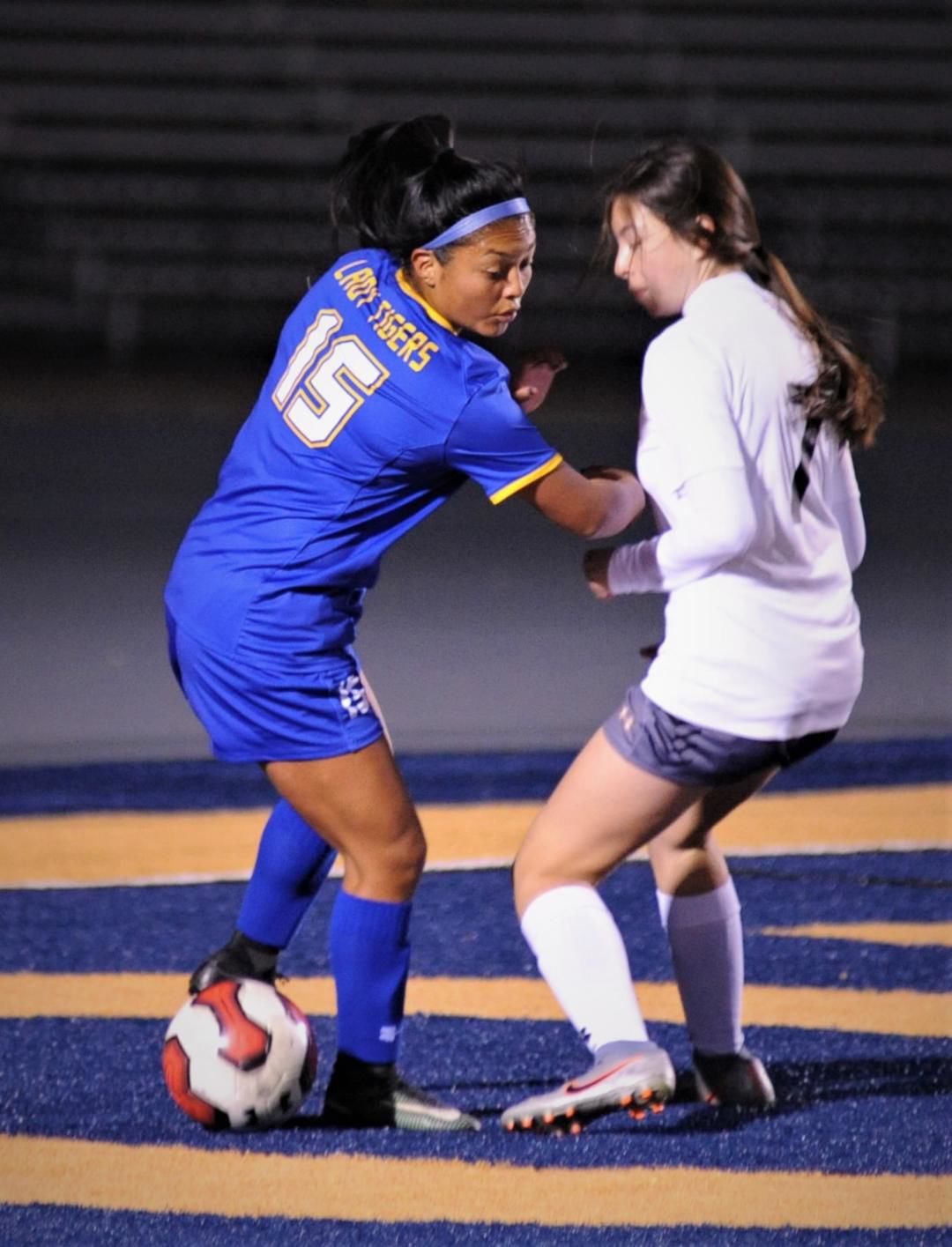 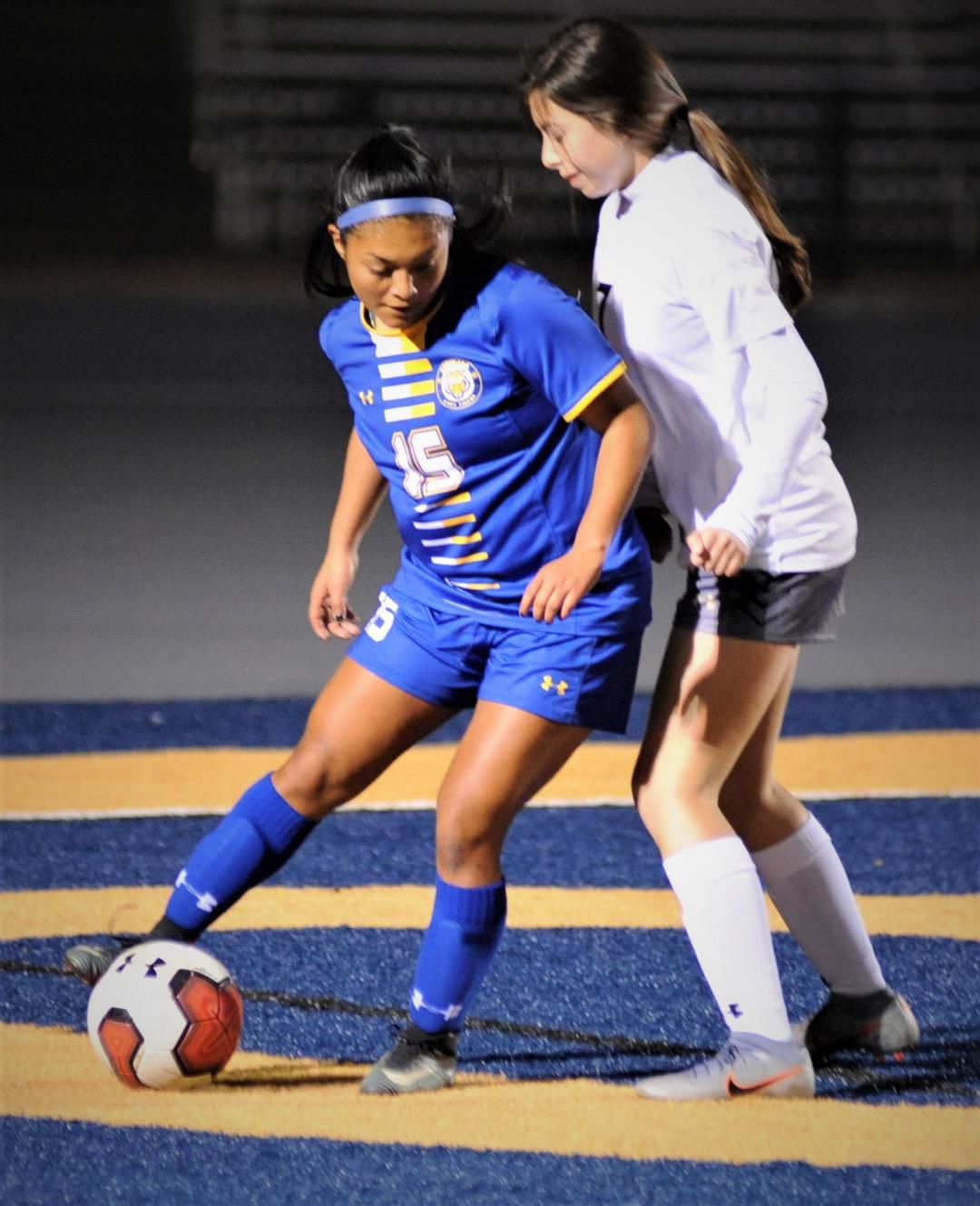 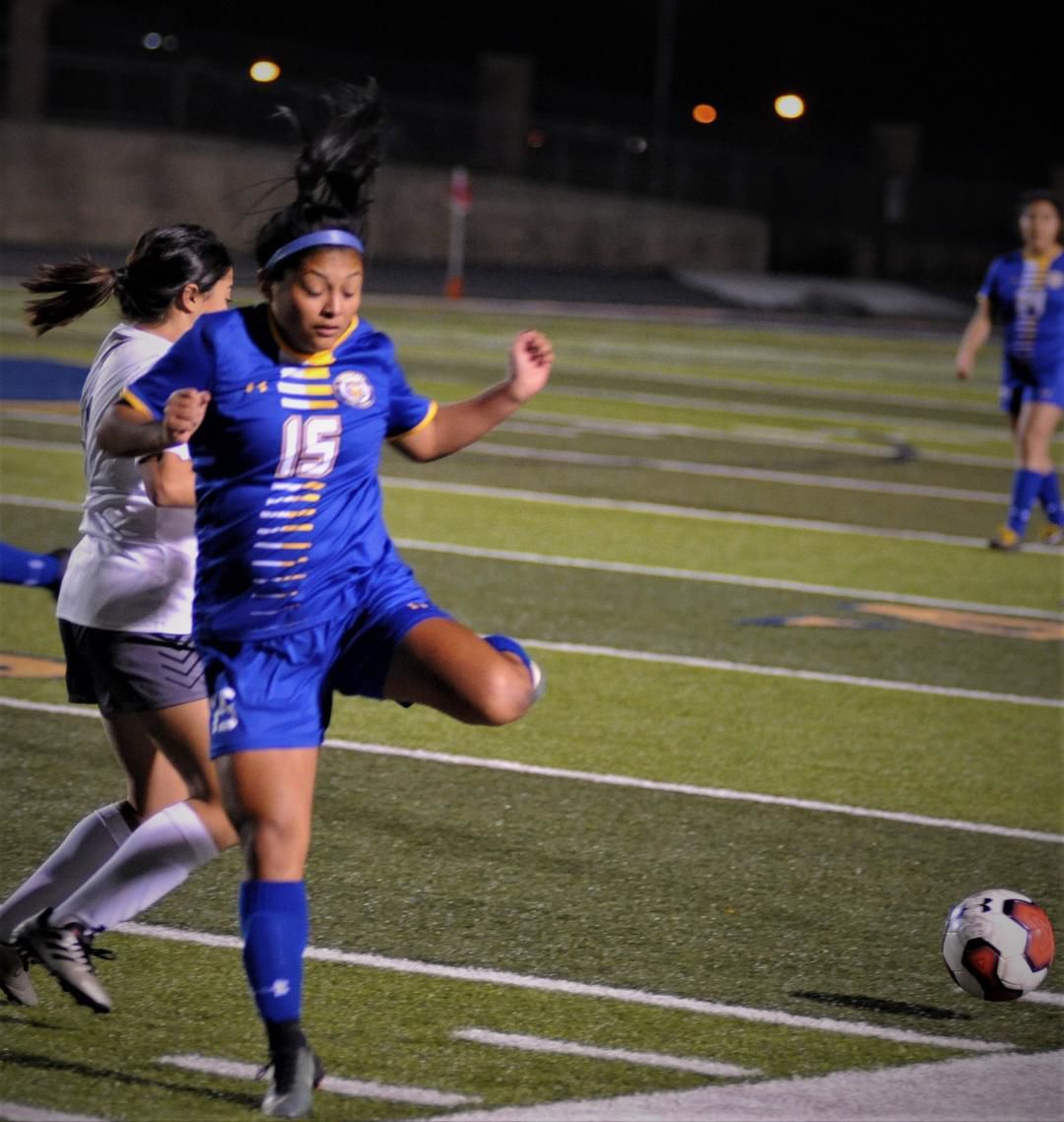 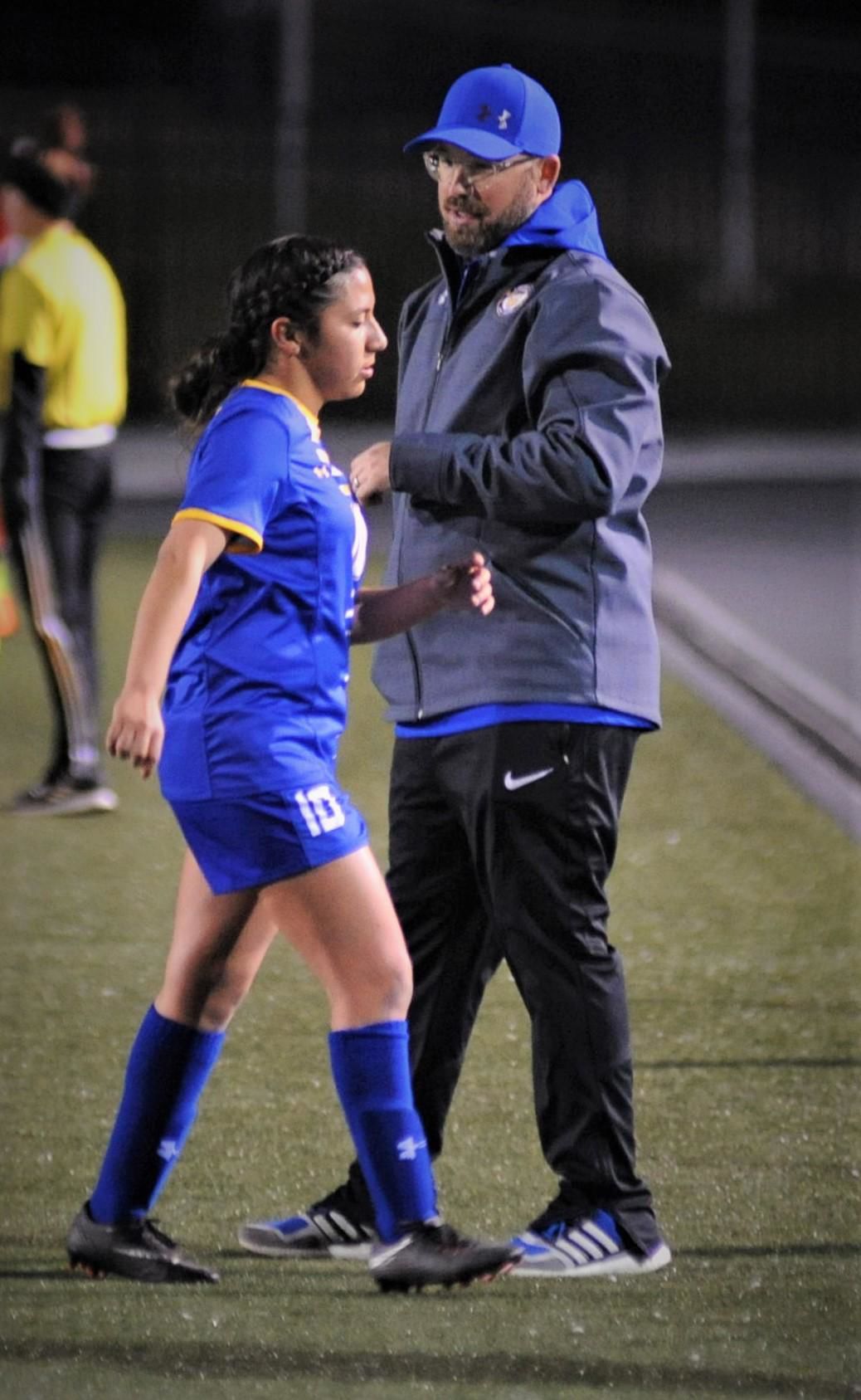 It will go down as a 1-1 tie in the books, but it felt and looked a lot better than a tie for Corsicana's Lady Tigers soccer team.

"I thought they did a great job" said Corsicana girls soccer coach Brent Hardwick after watching his kids tie Kaufman 1-1 Tuesday night at Tiger Stadium. "We did everything but score another goal. We created a lot of opportunities. It just seemed like we were one pass or one play from putting a lot of points up. I really liked the way we played."

Hardwick's young team has shown tremendous improvement in the first week of the season and dominated the first home game Tuesday at Tiger Stadium, where they played most of the game on the offensive, forcing the action in front of Kaufman's goal.

The Lady Tigers scored early when Atzhari Madera sent a nice cross to the right side for Brittney Gallardo, who ripped a shot from 20 yards out that found the right side of the net in the sixth minute of play to give Corsicana a 1-0 lead.

The Lady Tigers spent the rest of the night attacking and with a break here or there could have scored four or five more goals.

Jackie Cuevas was at the heart of the attack and beat defenders all night with her quickness and drive. She owned the right sideline and at times was simply unstoppable. But the Lady Tigers had trouble cashing in to run away with the game.

Hardwick wasn't discouraged because he saw a different team than played at Tiger Stadium a year ago, and knows if Cuevas and his front players keep playing with this aggressive and goal-minded persona that the goals will come.

"I really like the way Jackie played," Hardwick said. "She created most of our opportunities. She's one of those players who can have multiple goal games, not just one goal games.

"She can really reach new heights this year," he said. "I'm looking for her to have a breakout year this year and really be special next year. She's a junior so we've got here for two years."

Hardwick was proud of his defense.

"They (Kaufman) had just beat a team 9-0 in a tournament so we knew they could score a lot. I thought we did a great job on defense.

"We had some miscommunication on the one play (when Kaufman scored) but I was really proud of our backs," Hardwick said.

Hardwick used two goalkeepers and a tough back row to shut down Kaufman most of the night.

Two goalkeepers split the time with Paola Cedillo, a former defender playing the first half and Lara Bwicheilug playing the second half.

Bwicheilug, a junior who has been a three-year starter and impact player for the Lady Tigers' volleyball team, had never played soccer, but Hardwick has been impressed with her athletic ability and how quickly she has learned the game.

He feels he has two solid goalkeepers to start the season.

He also has confidence in his defensive backs, Emily Rojo and Samantha Pimental, who had outstanding games Tuesday, and backs Isabella Binford and Nayeli Lara, who set the temp and pushed the ball with an attacking mindset, had huge games as well.

"Our outside backs did a great job pushing the ball forward and creating some offensive opportunities," Hardwick said.  "When they push forward to attack it creates a lot of other possibilities and really opens up the game. It was real exciting to see that transition. This year we are able to create scoring opportunities."

Corsicana's front of Madera, Gallardo, Giselle Canales -- a player who is so versatile that Hardwick said that he can put her anywhere on the field -- and Joyleen Mercado all played well and help drive Kaufman nuts with scoring threats.

"We're looking to having an attacking mindset and not be so defensive minded this year," Hardwick said. "I was really pleased. Even at the end of the game we were one pass away from scoring.

"Once we put it together we are going to see a lot more scoring," he said. "I thought they played great."

The Lady Tigers, who are 1-2-2, play in the Fort Worth Brewer Tournament Thursday through Saturday.