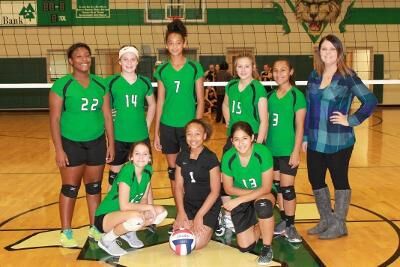 Hana Colvin, who has returned to Kerens as the head volleyball coach, is seen here as the Kerens junior high volleyball coach. The tall girl in the middle is Alexius McAdams, who was the Golden Circle Player of the Year and first-team All-State player last season as a senior. Colvin played for the Kerens volleyball team three seasons before graduating in 2011. 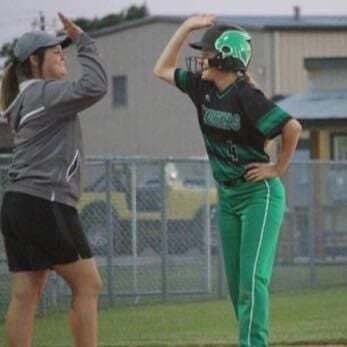 Hana Colvin, who has returned to Kerens as the head volleyball coach, is seen here as the Kerens junior high volleyball coach. The tall girl in the middle is Alexius McAdams, who was the Golden Circle Player of the Year and first-team All-State player last season as a senior. Colvin played for the Kerens volleyball team three seasons before graduating in 2011.

Hana Colvin didn't need a GPS to find her way back to Kerens High School.

She could have made the trip blindfolded.

At least that's the way Colvin felt when she was hired to be the LadyCats' new head volleyball coach.

If anyone every took a job with their eyes wide open it was Colvin, who played volleyball when she was a student at Kerens and coached junior high sports as well as coaching high school volleyball and softball as Aaron Kinney's assistant.

When Kinney, who left his mark on the girls athletic program at Kerens, where he built the softball program and had tremendous success as the head volleyball coach, left this spring, Colvin picked up the phone and made a huge call.

"When I heard Kinney was leaving I called Denise and Kristen," Colvin said, "and asked them if they thought I was ready."

Denise is Kerens basketball coaching legend Denise Lincoln, who is the girls athletic coordinator who has won more than 300 games on the court as well as coaching the girls track & field team every spring.

Lincoln was also a co-coach with Kristen Lynch in the early days of volleyball at Kerens when Colvin played for the LadyCats beginning as a sophomore. Lincoln and Lynch, a volleyball coaching legend at Kerens, both knew the time was right for Colvin.

"She was here before and she's coming back home," Lincoln said. "She has gained a lot of knowledge. She went off to Corsicana and learned a lot from that volleyball program. That helped her a whole lot.

Different, but the same coach who loves Kerens.

"She loves the girls," Lincoln said. "She's a hard worker and she wants to be the best. She's going to put everything into it, and she's going to be a great coach."

"I'm really happy to be back at Kerens," Colvin said. "And excited about the girls on this team."

Colvin knows volleyball and she knows Kerens, where she will bring her own style and her own touch to a program that has produced some powerful teams and has been a consistent playoff team for years.

The LadyCats went to the playoffs during Colvin's first year as a sophomore player in 2008 and have made it to the postseason every year since.

Colvin's 2021 team looks like another playoff team with a solid group of players led by Elaysia Morgan, who was a Texas Girls Coaches Association first-team All-State player as a sophomore. Morgan, the Golden Circle Offensive Player of the Year, had 387 kills and 92 blocks.

Ironically, Colvin's first junior high team at Kerens included Morgan, who was a sixth-grader at the time.

The LadyCats also return Kenadee Lynch, a first-team all-district player who was the Golden Circle Setter of the Year after producing an amazing 673 assists. Olivia Holt, the district and GC Newcomer of the Year as a freshman, is also back with her older sister Abbigail Holt. Seniors McKenzie Bancroft, Leah Greene and Emily Foreman are back for a team that expects big things from freshmen Riley Spivey and Blair Blue.

Now she's back at Kerens, where she can't wait to start the season.

"I'm ready," she said. "It's really good to go off and learn a few things and then come back home. I think our seniors are going to be our leaders. Everybody is putting everything into it to be better. I can't wait for (Aug. 2) the first day of practice."