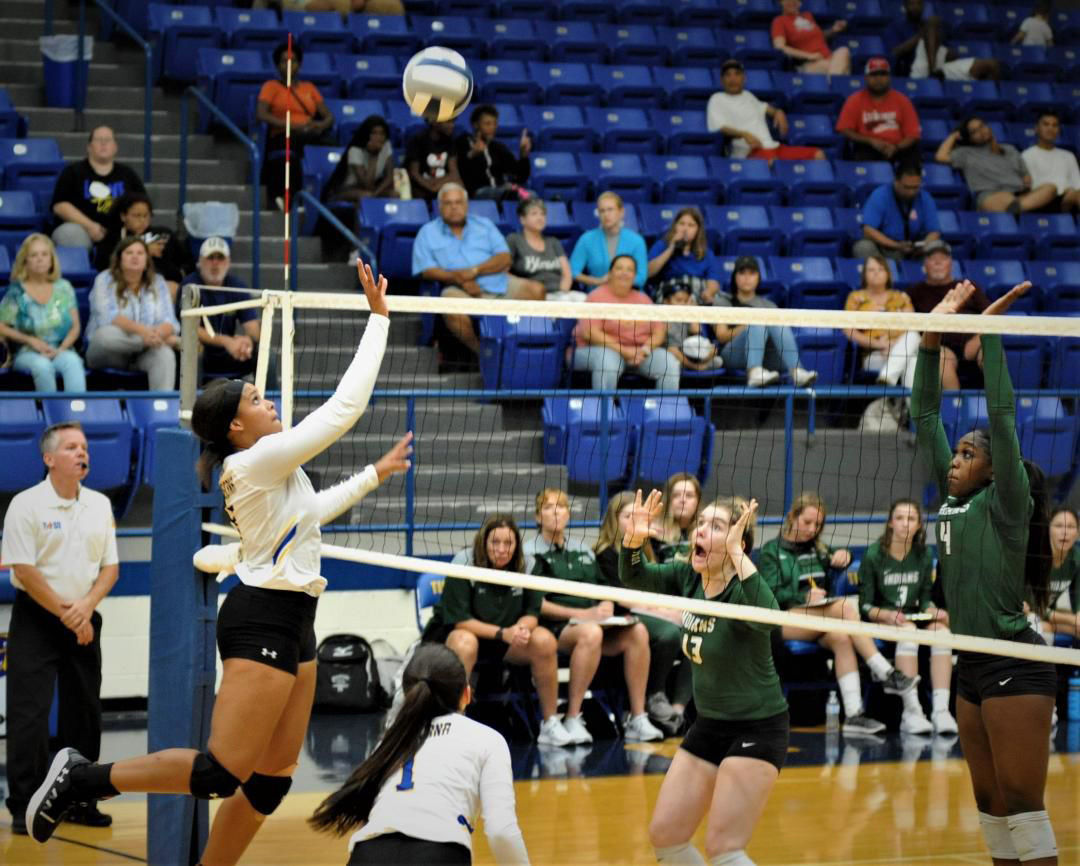 Corsicana’s Gabrielle James, seen here driving home a kill against Waxahachie in a game last season, is off to a tremendous start this season and had a monster match against Crandall Tuesday with 25 kills, 22 digs 13 assists, five aces and three blocks in the five-set win. 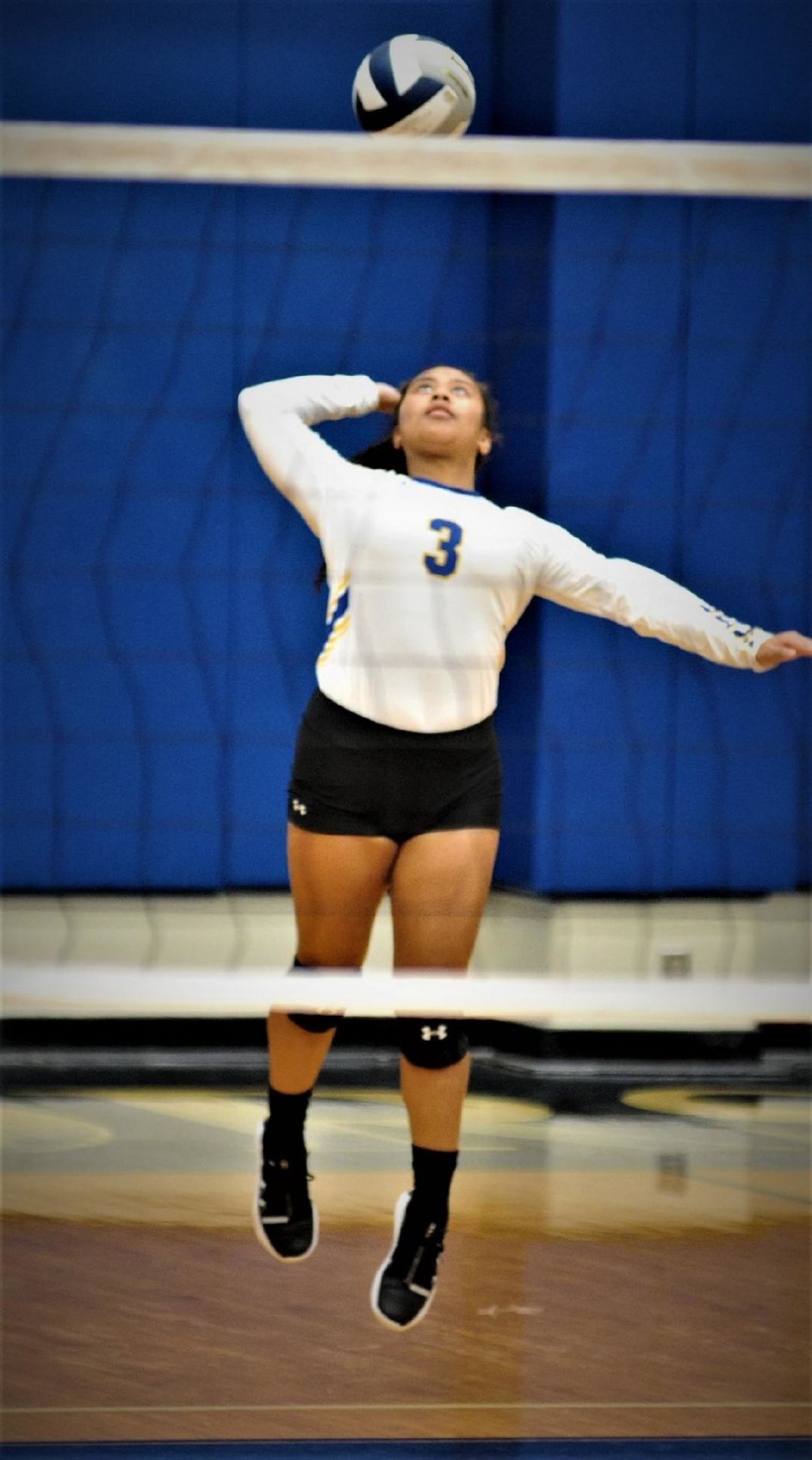 Corsicana’s Gabrielle James, seen here driving home a kill against Waxahachie in a game last season, is off to a tremendous start this season and had a monster match against Crandall Tuesday with 25 kills, 22 digs 13 assists, five aces and three blocks in the five-set win.

A little older, a whole lot wiser -- and boy oh boy are they hungry.

That's one way to describe the 2020 Corsicana Lady Tigers volleyball team. Another way is just to simply say: This team is better.

"It's night and day from last year," said coach Mashequa Gentry, who took over the program a year ago knowing one of the best teams in the program's history had just graduated.

Gentry's young team was tough and competitive, and now most of those young players are back and determined to reach the postseason.

"I think a lot of people were shocked that we won as many games as we did last year in a rebuild," Gentry said this week as her team finally began practicing. "This year is going to be a wild ride. We're going to make some noise."

Gentry has a ton of talent returning on a team that is still upset about not making the postseason last year -- players who are out to prove a point.

The Lady Tigers saw four seniors graduate, including Paige Franks, who was the Golden Circle Player of the Year and a first-team all-district selection. But they return seven players who started last season, including Lara Bwicheilug, a rare four-year starter who made the all-district second-team, and Gabby James, who had an impressive season and would have been an all-district selection if not for an injury that sidelined her during the district season.

Those two seniors will lead the way for a team that brings back starters all over the court. Libero Iriadna Sifuentes, a senior, returns along with two impact juniors -- Madison DePugh and Brinley Burke, who give the Lady Tigers a strong middle hitting lineup. Juniors Kayla Esa and Blair Dunn also return as outside hitters.

Gentry is also excited about two defensive specialists -- Bailey Dobbs and Arlette Rodriguez, who are moving up from the JV , and seniors Madison Greene and Kitana Elias as well as newcomer Kayla Tidwell.

There's more experience and more depth on this year's teams.

"The biggest difference is our growth and maturity from last year to this year," Gentry said.

She also knows the team will have great leadership from Bwicheilug and James.

The program has been so strong over the last eight years that it's been incredibly rare for a freshman to start, but Bwicheilug started and was an impact player as a freshman, and has had an exceptional career as a setter and all-around player in volleyball. Last winter she played varsity soccer for the first time and emerged as an All-State goalkeeper.

"She's such a good athlete she was able to do that," Gentry said. "She's a great athlete who has a knack for the ball, whether in volleyball or soccer.

"It's pretty rare to start as a freshman. It's very seldom that happens (in this program). It says a lot about her that she made the team and handled the pressure and was very productive at a very young age.''

Now she's back to lead.

"She brings a lot of experience," Gentry said. "She's a great leader to run our offense, and she leads us off every match with her serving. She sets the tone."

James is one of the best overall athletes in the Golden Circle and is a leader and a top player in volleyball, basketball and softball. She had her moments on the volleyball court and was a force at the net with vicious kills, and also set up teammates, doing a little of everything on and off the court.

"She brings a lot of strength and power," Gentry said of James. "He presence and energy is so strong and she demands the other girls to raise their level of play.

That energy can be seen all over the court this season as the 2020 Lady Tigers not only return with experience, but with a new determination.

"I feel like we have a lot of positive energy," Gentry said. "And we have also been able to execute. We've had a little more time to be cohesive. Last year they were trying to figure it out. This year it's smoother."

The Lady Tigers play in a district loaded with power teams such as Red Oak, Midlothian and Joshua, but Gentry feels good about the experience and talent she has coming back and the drive her kids have brought to the new season.

"We have a lot of work horses who put in the time to be where we want to be to be ready for district," she said. "I think we've got a shot at the playoffs."