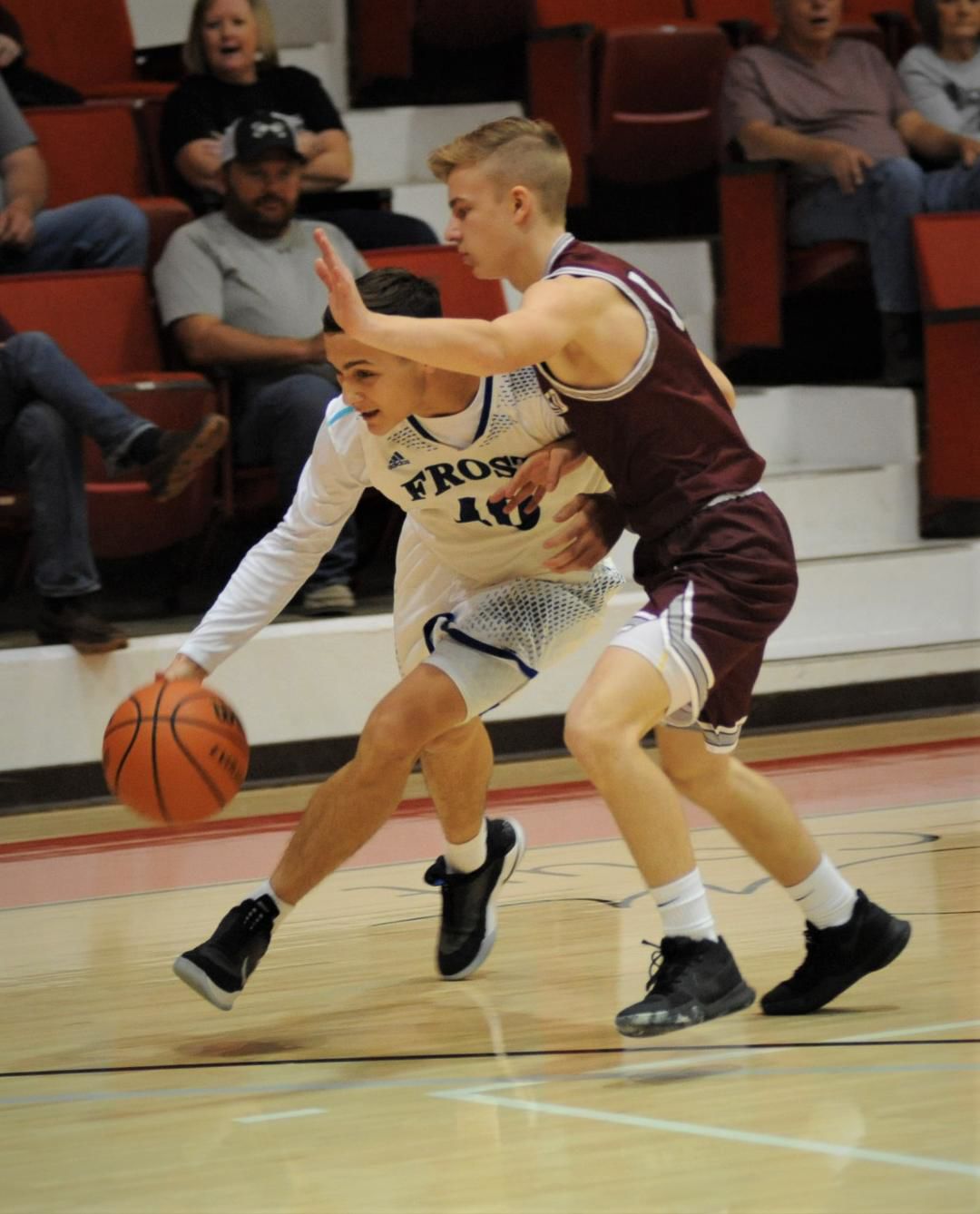 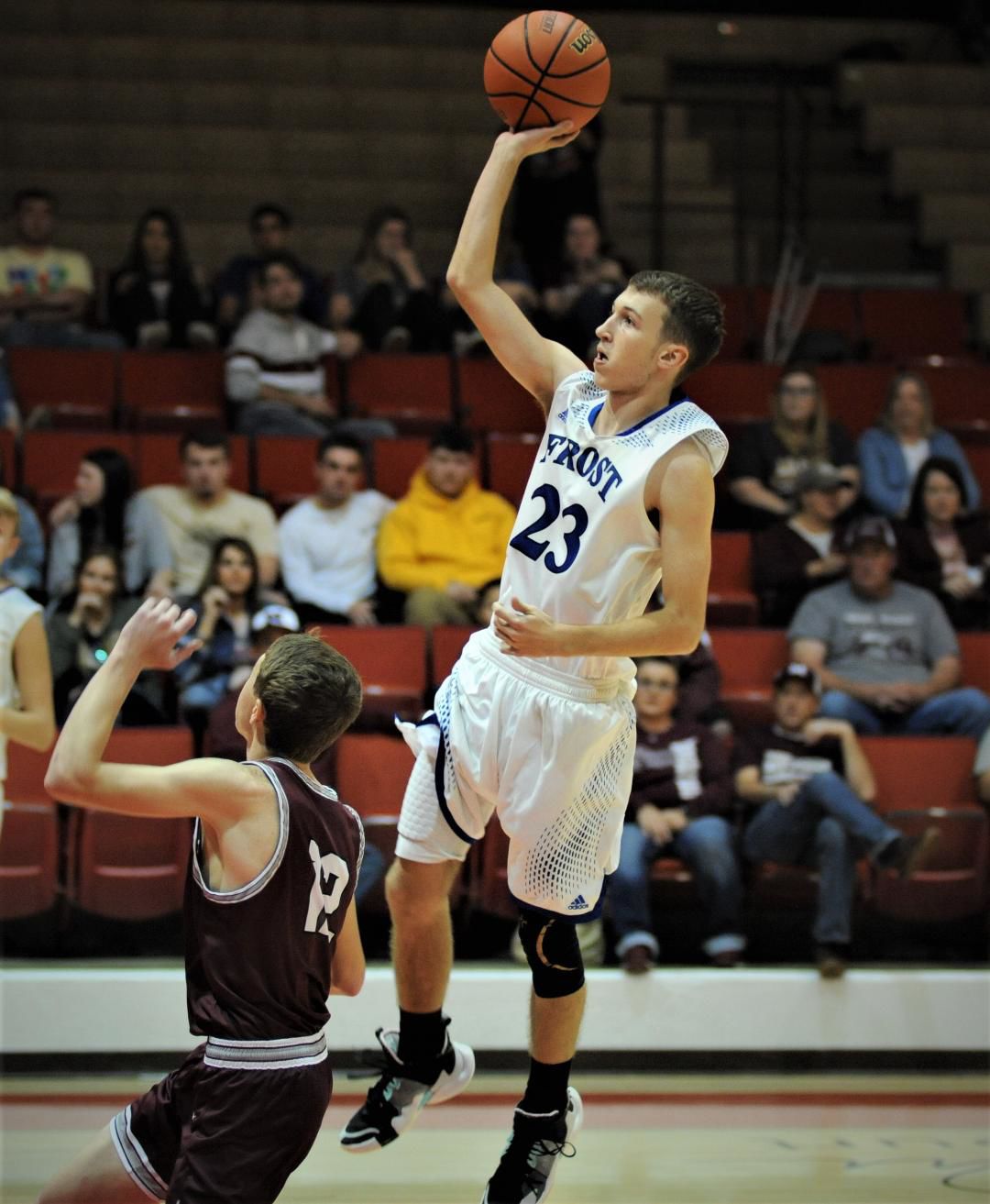 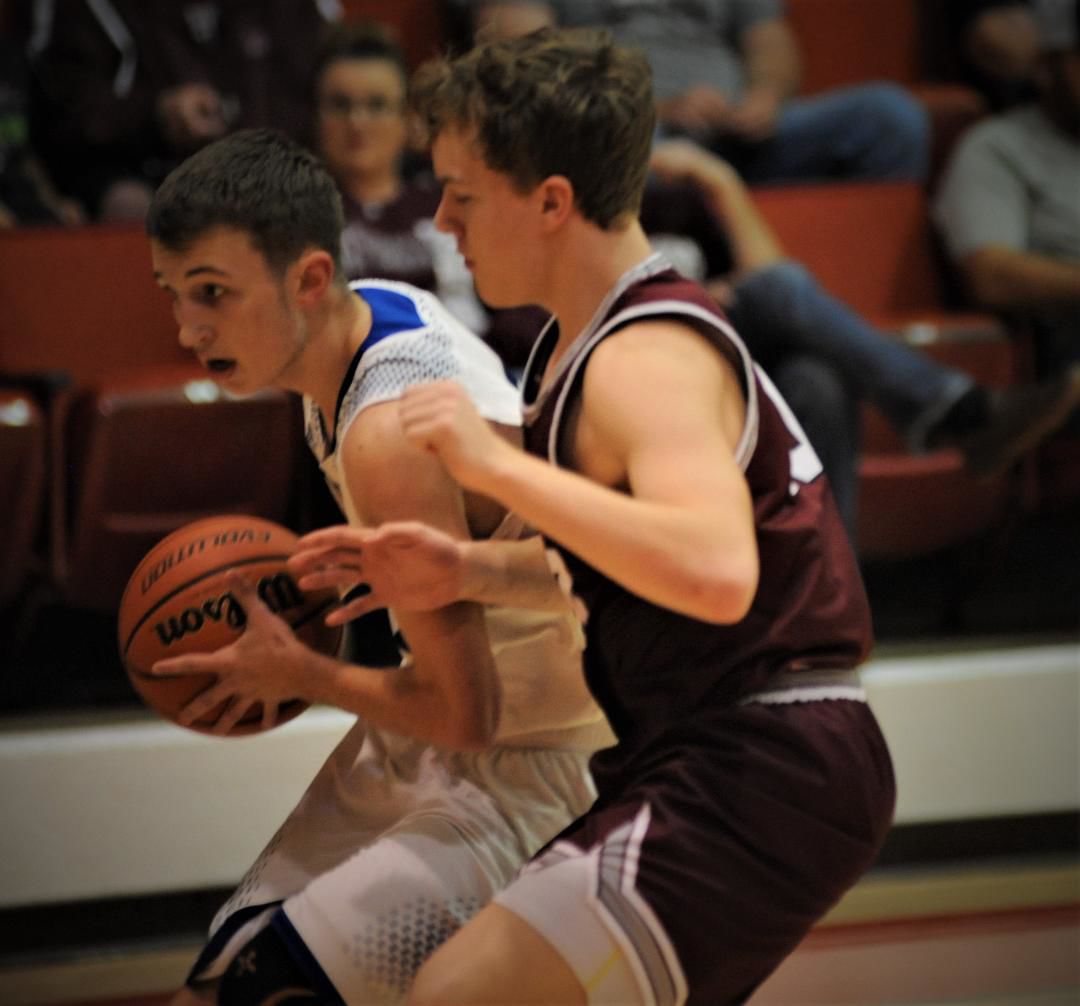 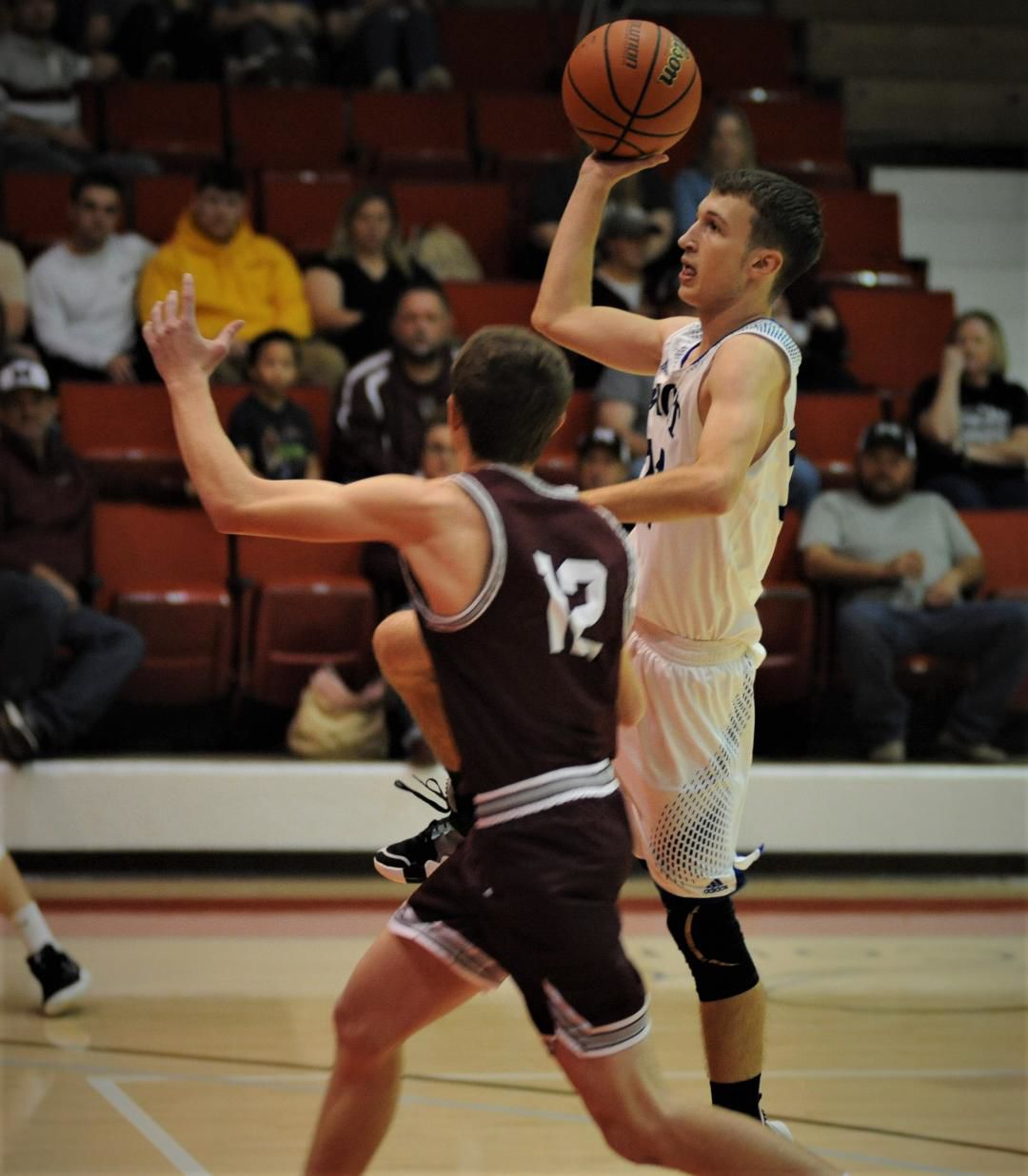 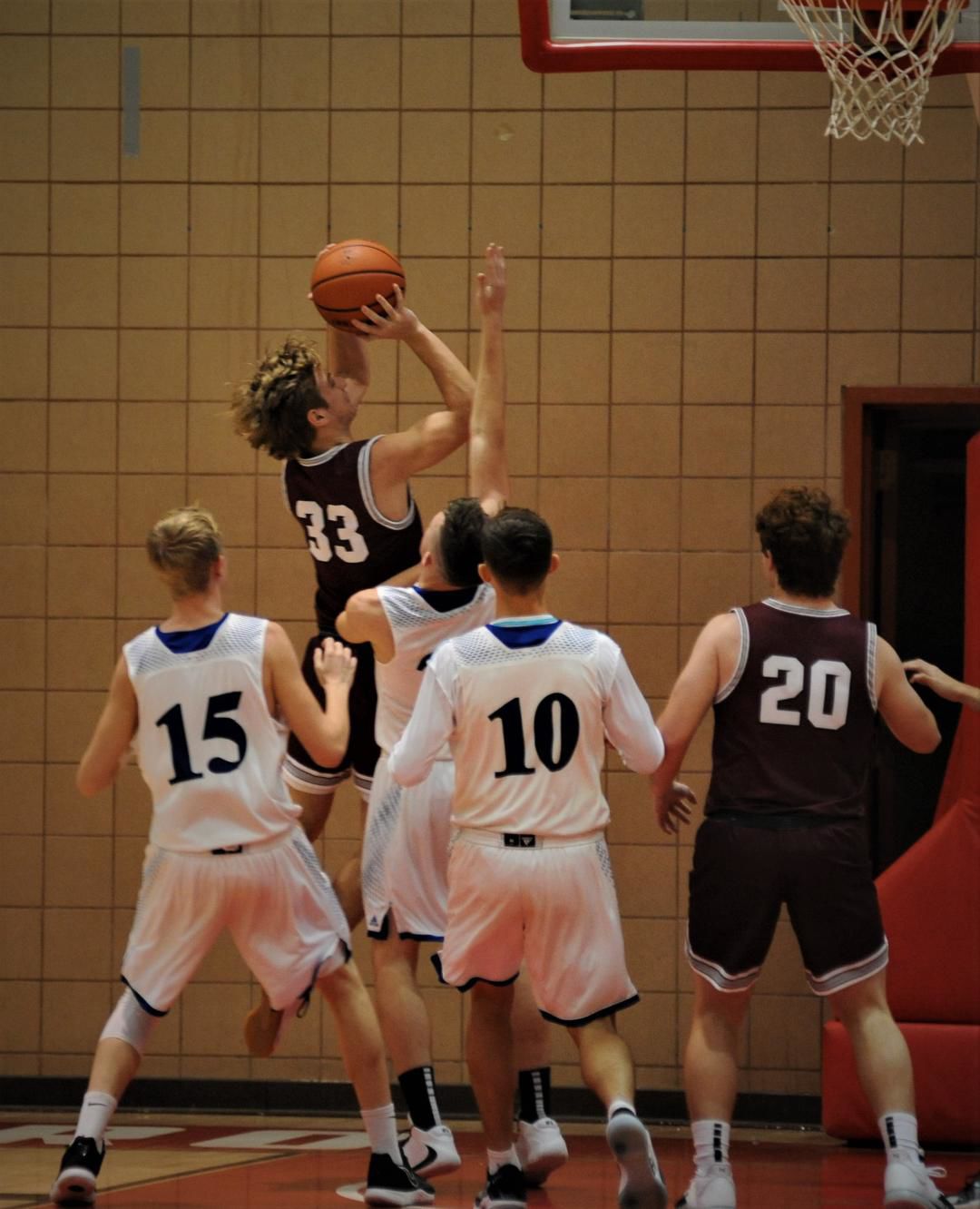 Mildred's Creed Baker, seen here making a shot in Friday's win over Frost, scored 31 points Saturday to lead the Eagles to a 64-62 win over Italy in the consolation final of the Kiwanis Classic. 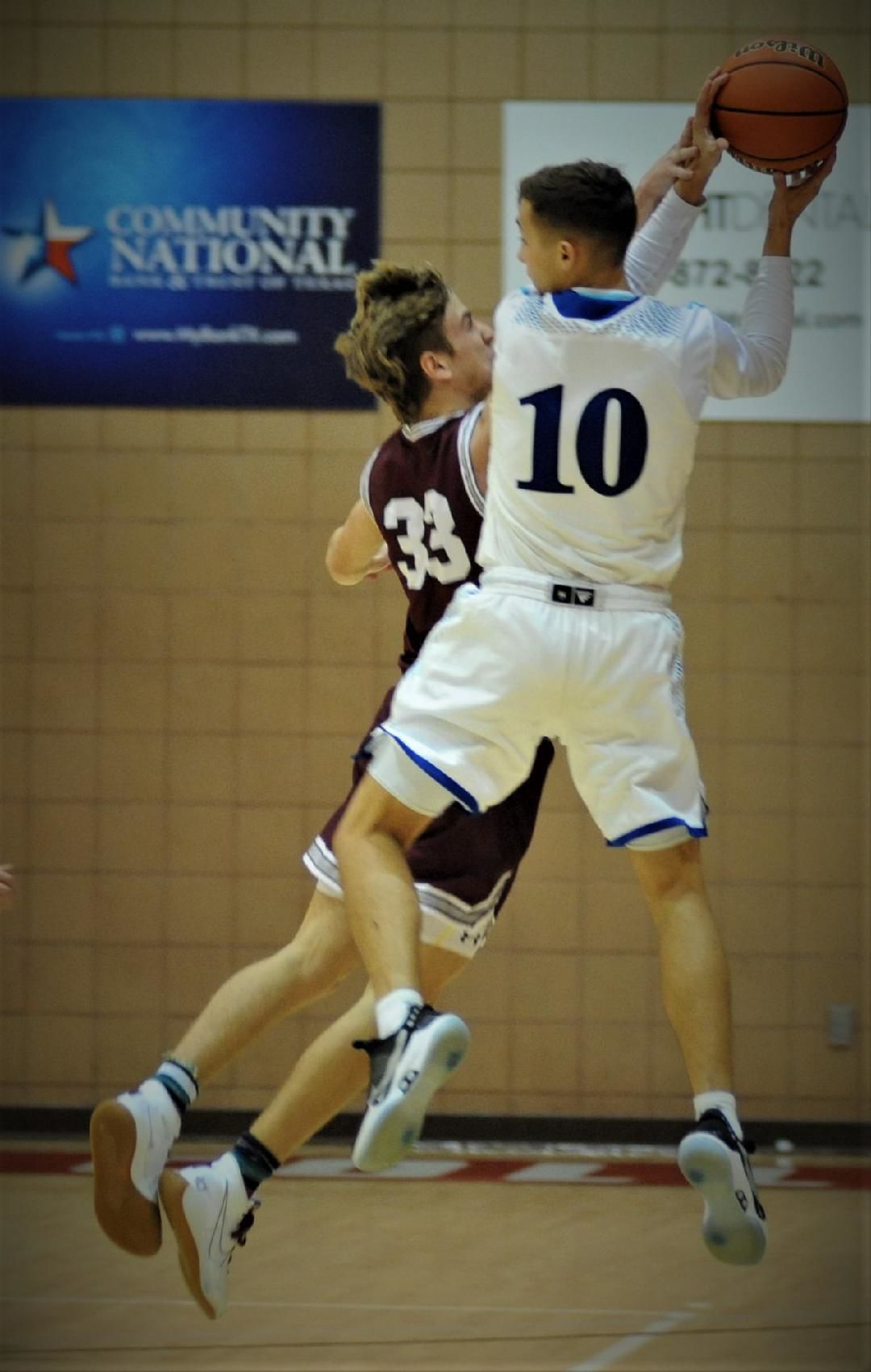 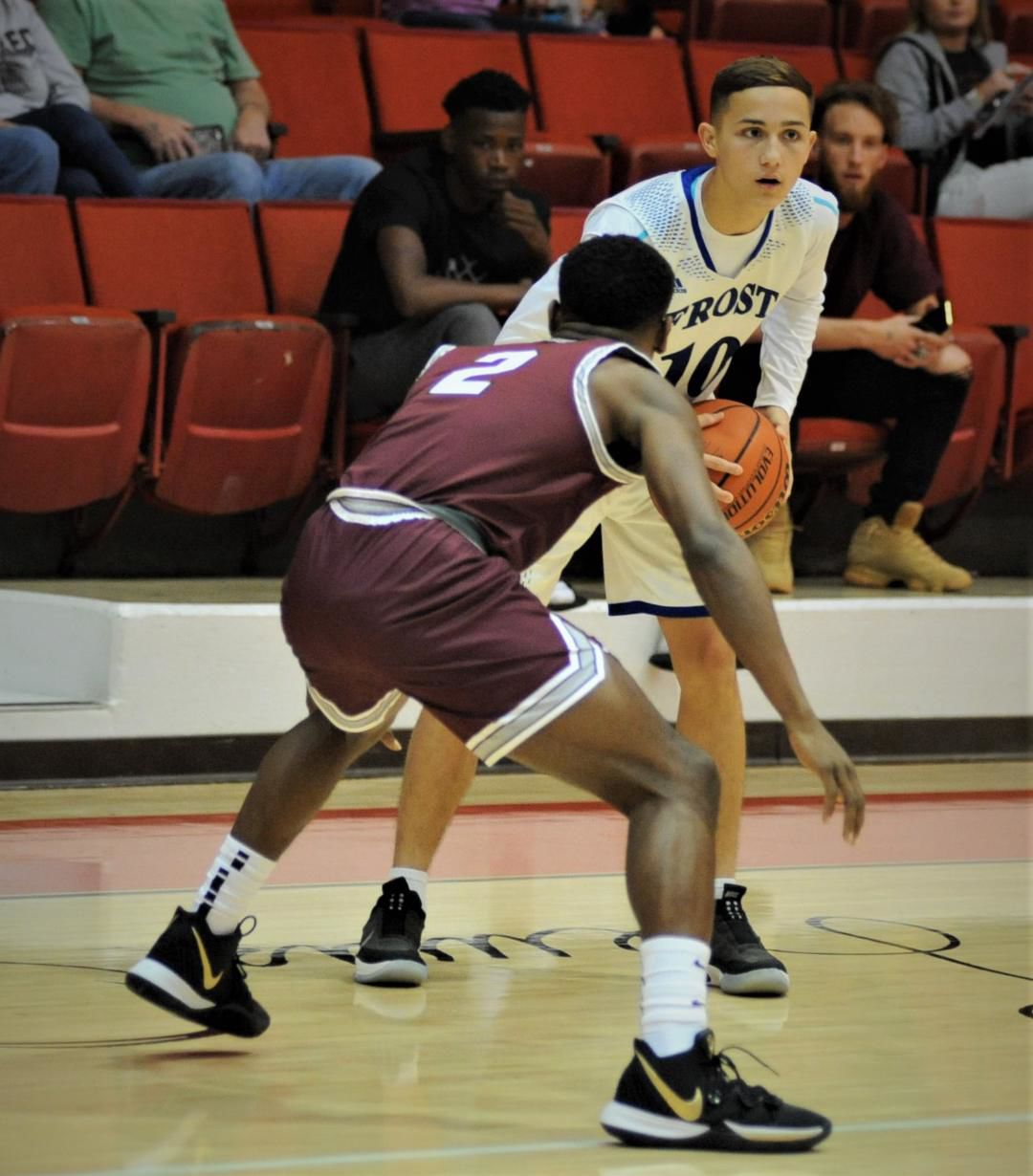 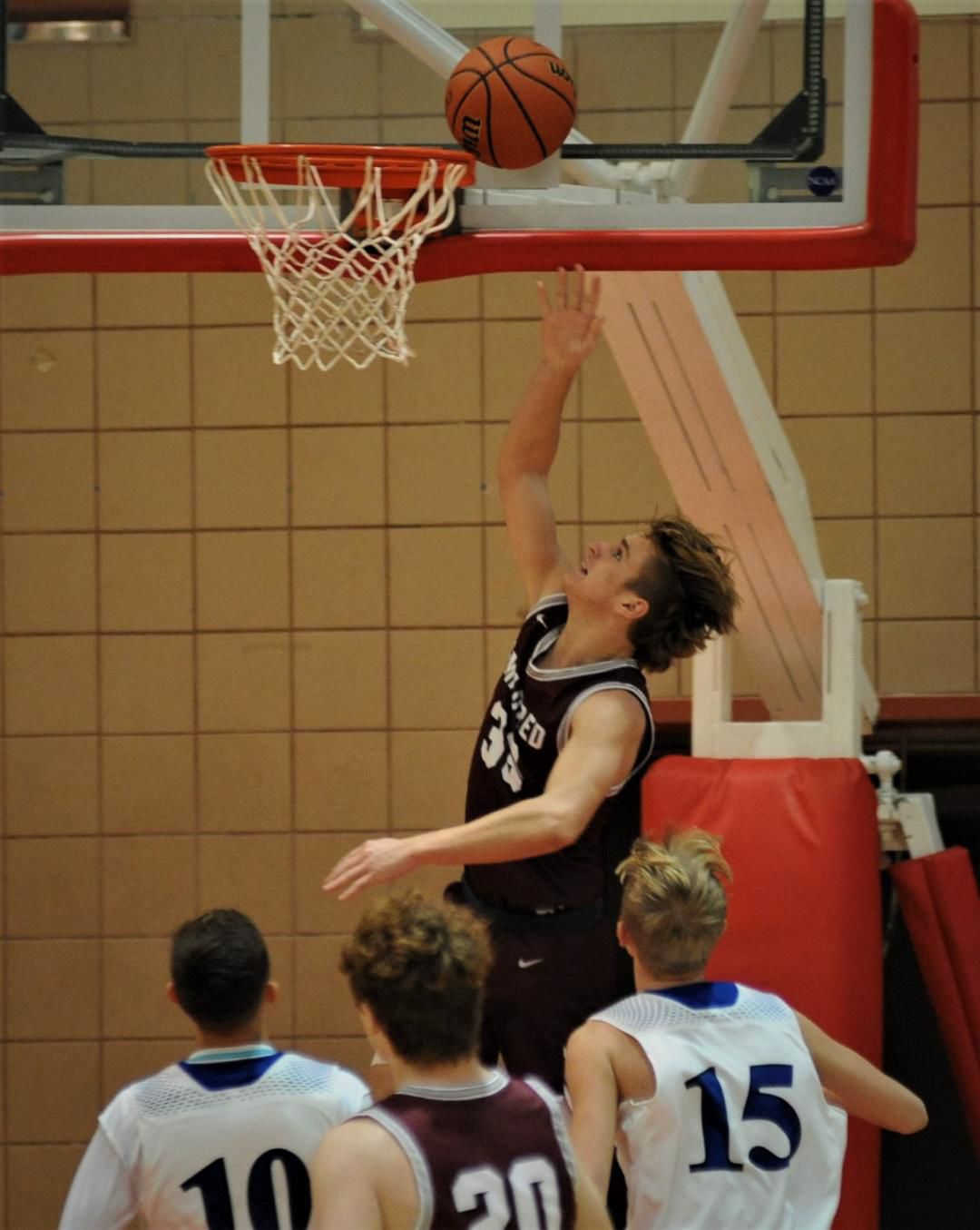 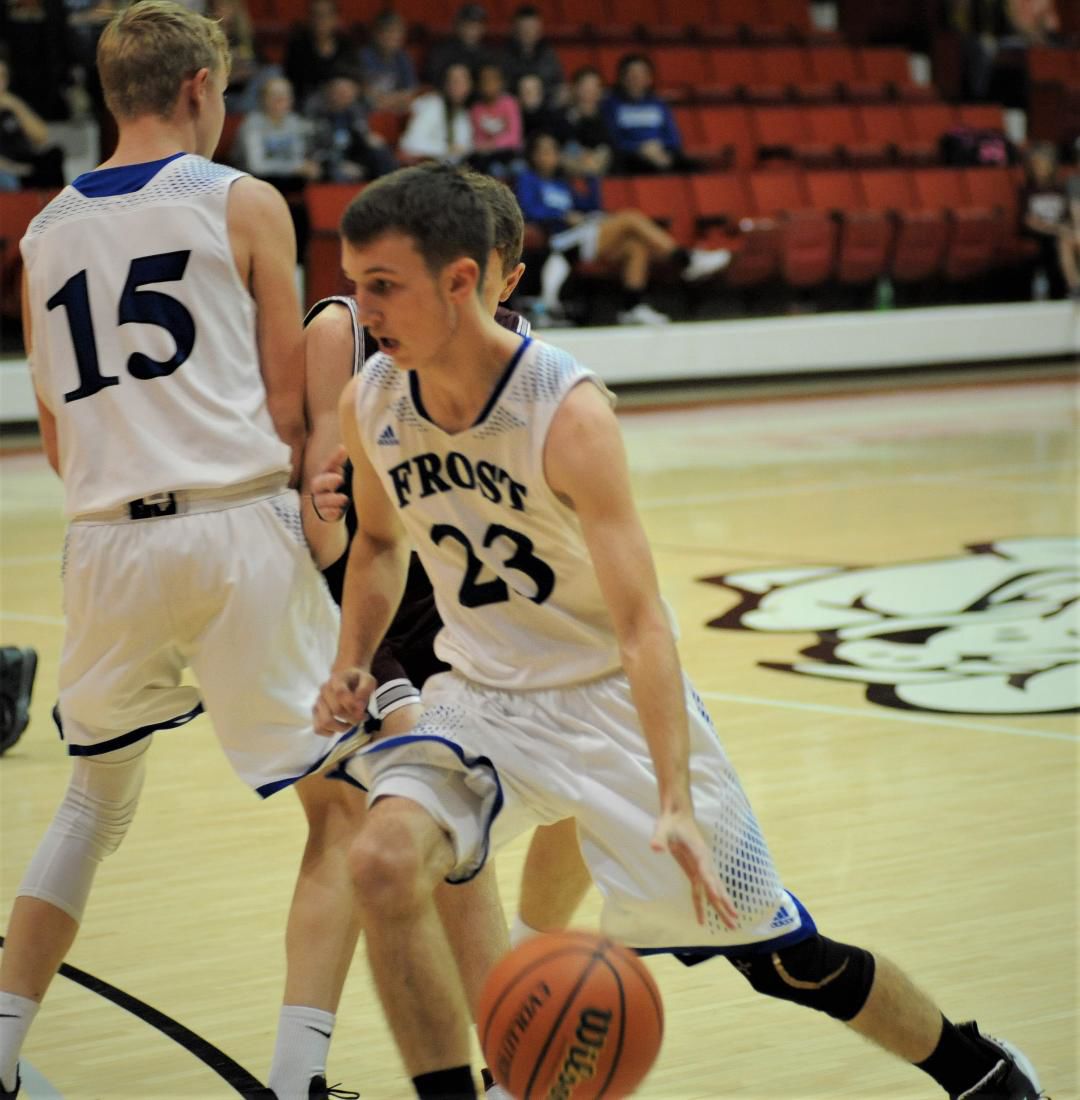 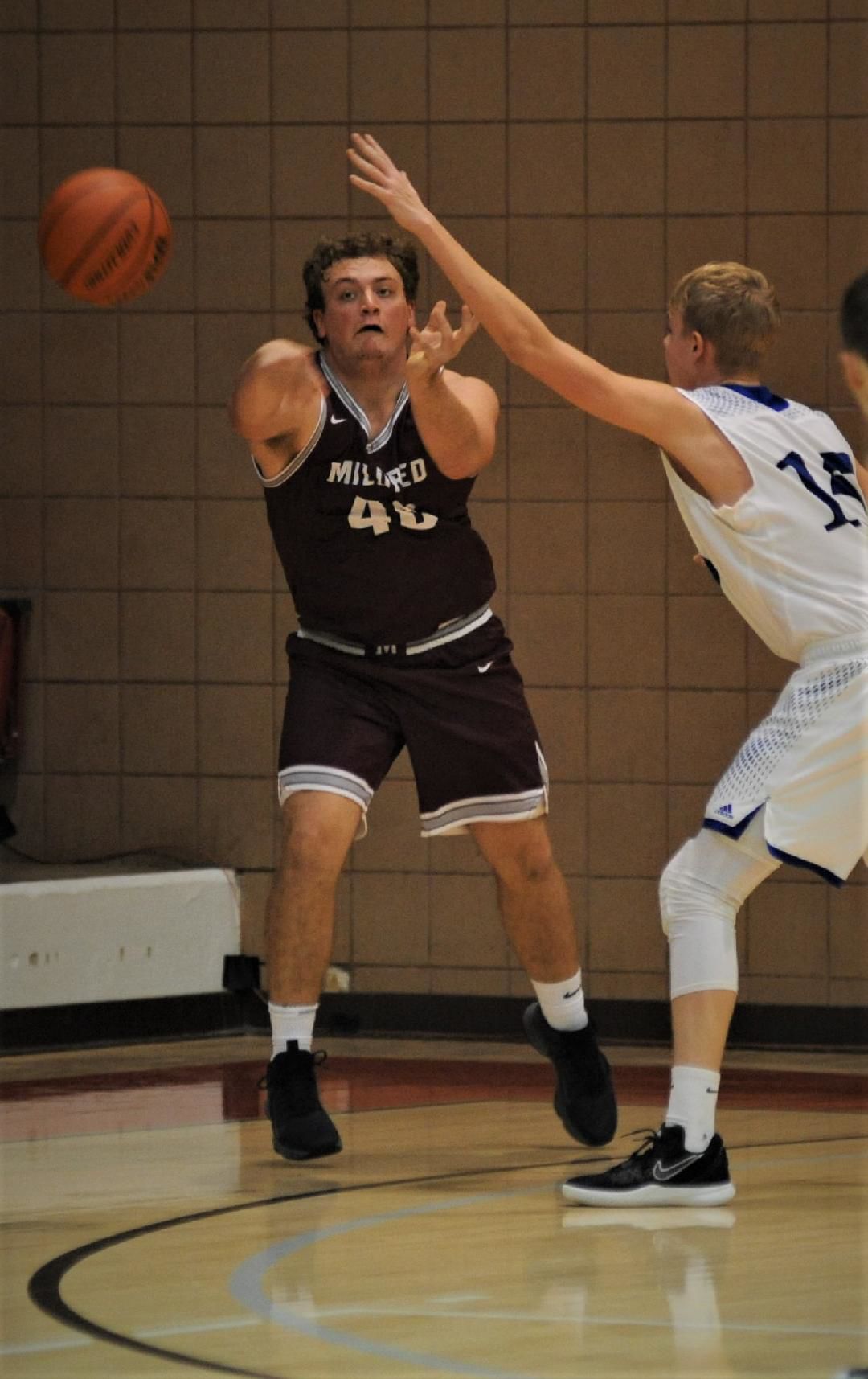 Mildred's Creed Baker, seen here making a shot in Friday's win over Frost, scored 31 points Saturday to lead the Eagles to a 64-62 win over Italy in the consolation final of the Kiwanis Classic.

After Thursday night’s tough 1-point loss to Kerens in the first round of the Kiwanis Classic, the Mildred Eagles rebounded with an offensive explosion, defeating the Frost Polar Bears, 80-32, in the consolation semifinals Friday afternoon.

Cody Hayes led the Eagle offensive outburst with 29 points to lead all scorers, while Creed Baker dropped another 20 points for the Eagles.

Mildred got off to a quick start, getting off to a 13-0 lead midway through the first quarter.  Frost battled back with three 3-point shots to cut the lead to 13-9.  The Eagles would respond with a 7-2 run before Frost’s Korben Bowling hit a buzzer-beating shot from beyond midcourt at make the score 20-14 at the quarter.  That would be as close as the Polar Bears would get.

Frost was led by Bowling with 13 points, while Caden Updergraff added 11 points.  Closing out the scoring for the Polar Bears were Waylon Watson (5 points) and Preston Rasco (3).

Mildred will face Italy in the consolation championship game Saturday afternoon at 1:30 p.m.  Frost moves into the seventh-place game against Milford at 10:30 a.m. Saturday morning.  Both games will be on the campus of Navarro College.

Blooming Grove dominated the second period, outscoring the Milford Lady Bulldogs, 8-2, to break open a close game and cruise to a 39-20 win in the consolation semifinals of the Kiwanis Classic.

Milford was led by Markia Houston with 14 points.

Blooming Grove moves on to the consolation championship game against rival district-rival Rice on Saturday at noon.  Milford will face Dawson in Saturday’s opening game, the seventh-place match-up, at 9:00 a.m.  Both games will be played on the campus of Navarro College.

Boosted by a big game from Alyssa Claxton, the Rice Lady Bulldogs steadily pulled away from the Dawson Lady Bulldogs, 36-23, Saturday afternoon, to advance to the consolation championship game of the Kiwanis Classic.

Claxton finished with 14 points, including 7 in the fourth quarter, as Rice put the game away in the second half.  Joselyn Ramos added 7 points and Hannah Harwell had 6 points to help led Rice.  Others scoring for Rice were Lexi Davis (5 points), Kelly Montgomery (2), and Victoria Razo (2).

Rice will face district-rival Blooming Grove at noon on Saturday for the consolation title.  Dawson moves to the seventh-place game against Milford at 9:00 a.m. Saturday.  Both games will be on the campus of Navarro College.

Leading the way for the Gladiators were Williams with 28 points and Holley with 16 points.  Woodard led the offense for Milford with 22 points.

Italy will face Mildred in the consolation championship game, while Milford will take on Frost in the seventh-place game on Saturday at 10:30 a.m. Both games will be on the campus of Navarro College.