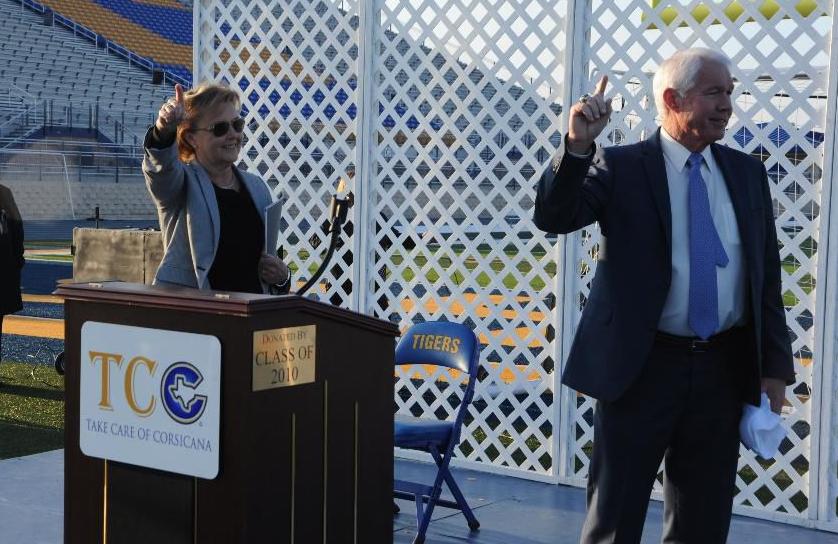 Hal Wasson (right) and Superintendent Diane Frost stand as the band plays the school song as CHS announces the hiring of Wasson. 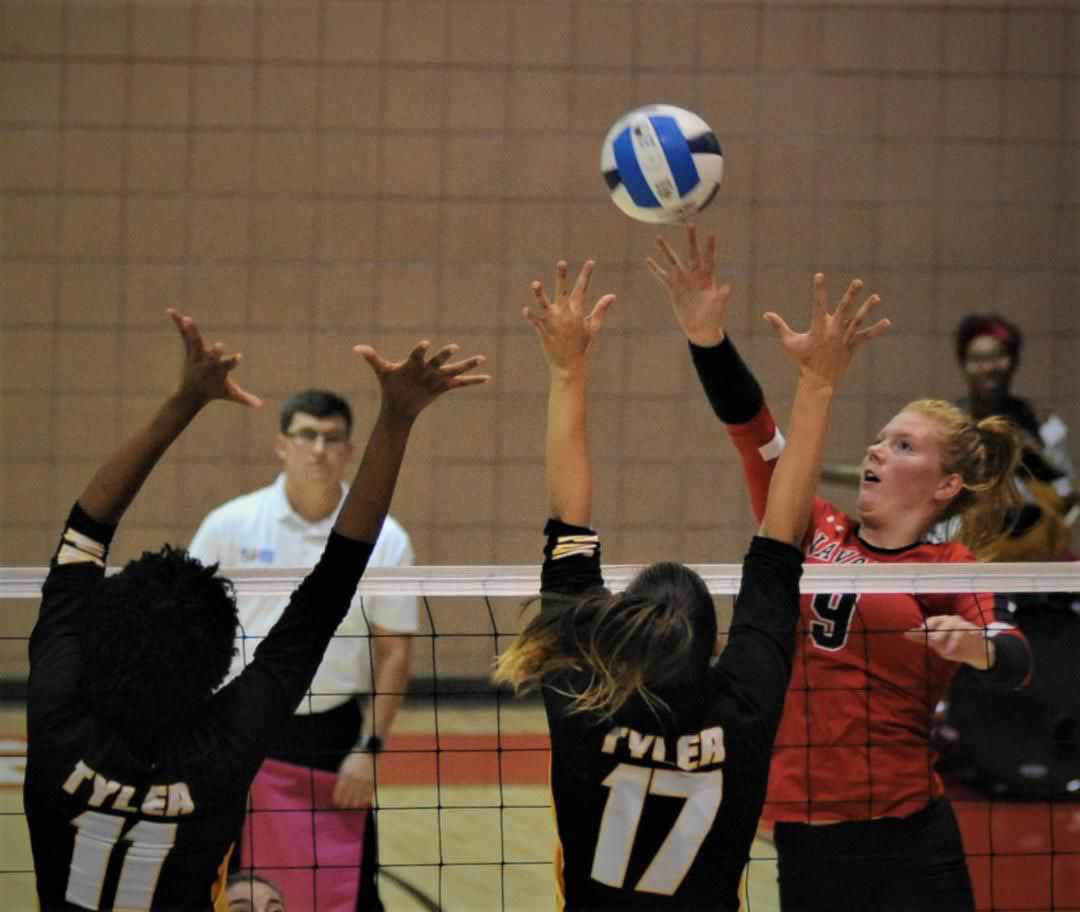 T Jordan Lockwood, who was the NJCAA’s Player of the Year, slams a kill. Jordan helped lead Navarro’s volleyball team that went 31-0 and won the NJCAA national title. B 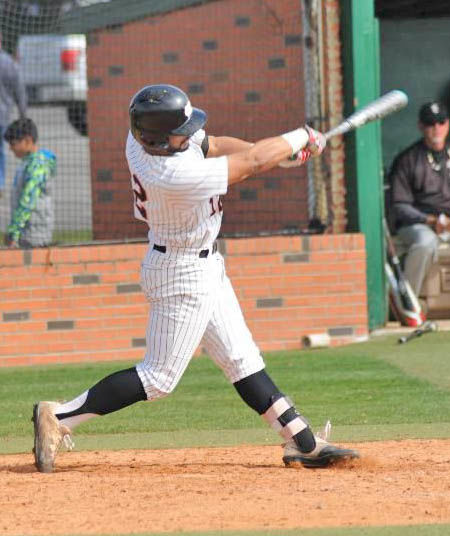 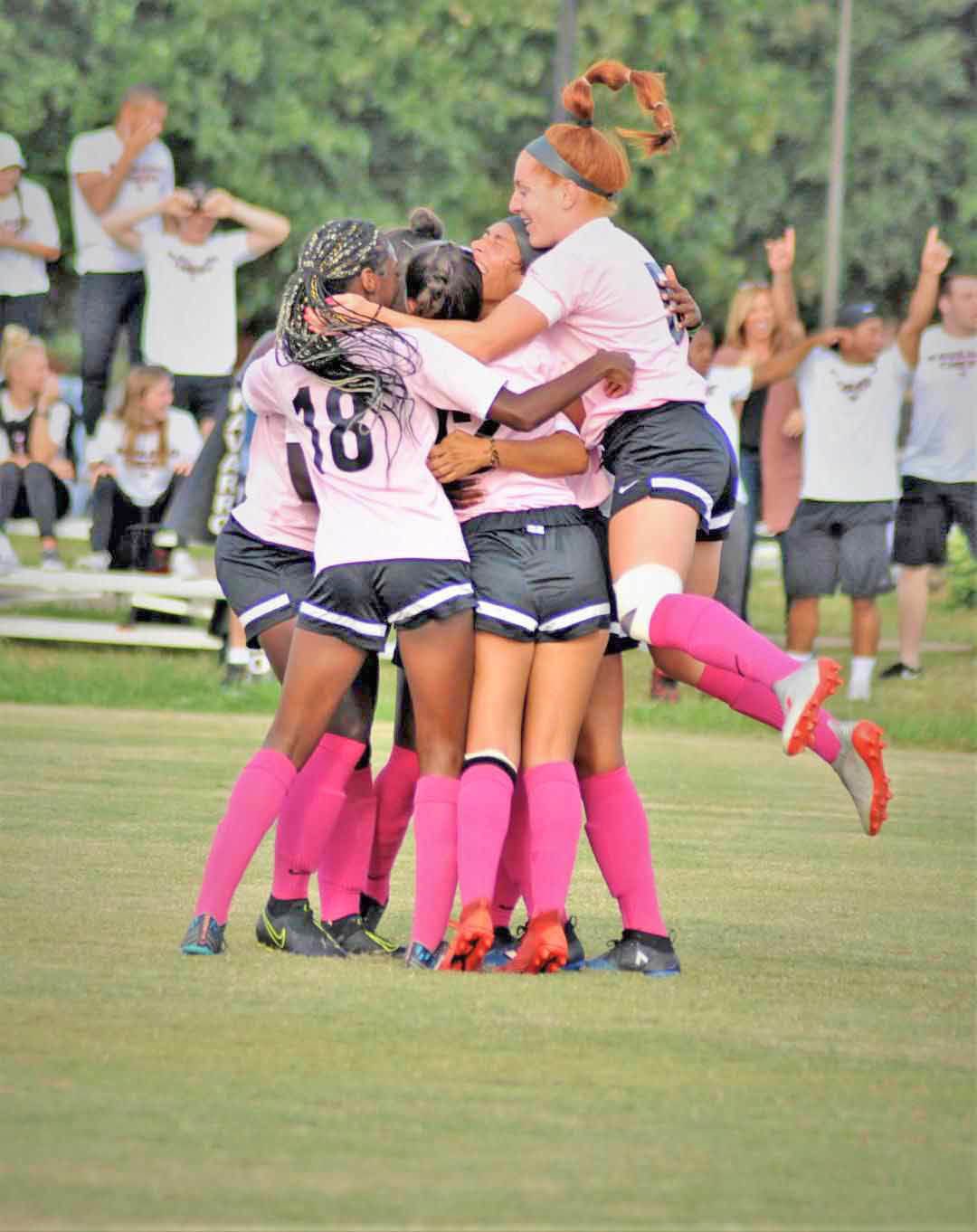 Navarro’s soccer team celebrates after a victory. The Bulldogs beat the odds and earned their second consecutive berth in the NJCAA national tournament. 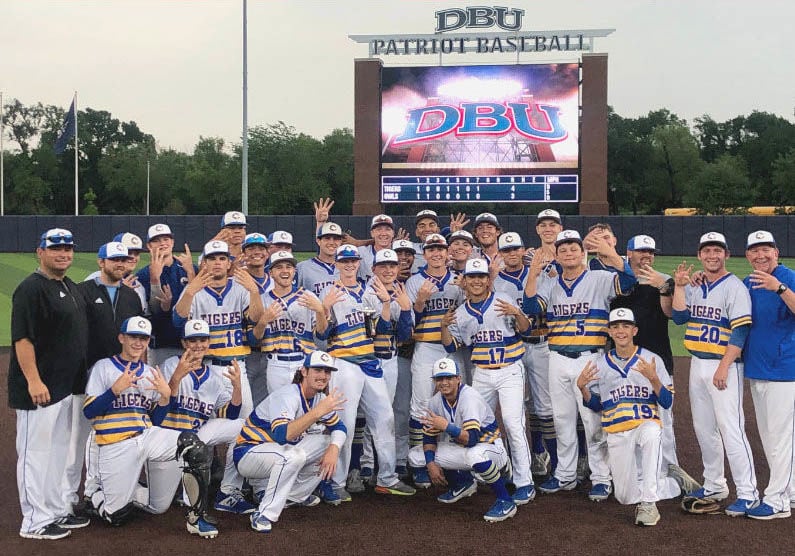 The Tigers baseball team celebrates after winning the region title and the berth to the state tournament, the first at CHS since 1958. 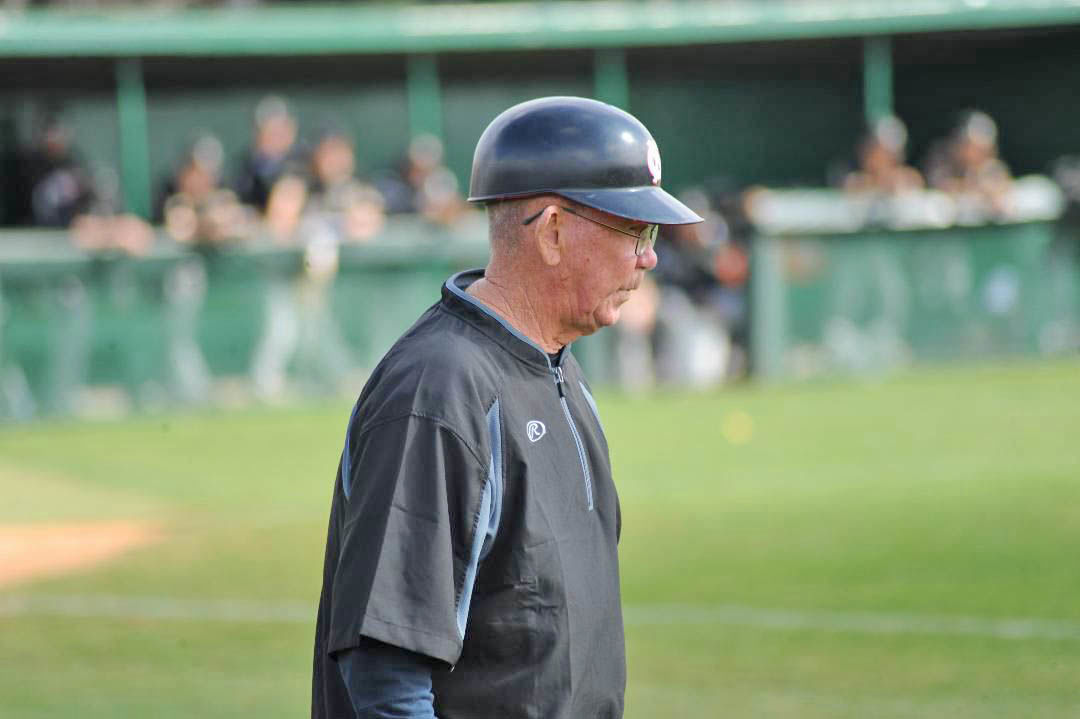 Hal Wasson (right) and Superintendent Diane Frost stand as the band plays the school song as CHS announces the hiring of Wasson.

T Jordan Lockwood, who was the NJCAA’s Player of the Year, slams a kill. Jordan helped lead Navarro’s volleyball team that went 31-0 and won the NJCAA national title. B

Navarro’s soccer team celebrates after a victory. The Bulldogs beat the odds and earned their second consecutive berth in the NJCAA national tournament.

The Tigers baseball team celebrates after winning the region title and the berth to the state tournament, the first at CHS since 1958.

Here’s a look at the Top Five sports stories in the Golden Circle from 2019.

In January the Corsicana Tigers announced that Hal Wasson was coming home, returning to Navarro County to coach the Tigers.

Wasson, who had a remarkable run at Southlake Carroll, where he went 125-21 and won nine district titles in his 11 years there and won the 2011 state title, said the decision to come to Corsicana in 1983 changed his life, and he had been wanting to coach at CHS since.

It has been a long road for Wasson, who has won just about every honor a high school football coach can achieve on and off the field in more than three decades of winning titles, state championships and respect and praise from his players and his peers. He even earned the National Coach of the Year award from USA Today.

His first team went 7-4 and made the playoffs, but Wasson said from Day 1 that he was in it for the long run and comes to Corsicana with the vision of being a state power and winning state titles.

The coach and his Tigers took the first big steps in 2019.

In one of most memorable seasons in Corsicana High School history, Heath Autrey’s Tigers, who were picked to finish fourth in the district, ride a wave of emotion and a roller coaster of comeback victories and become the first team since the 1958 Tigers to reach the state tournament.

Autrey won his 300th game in the regular season, and once the playoffs began his kids soared over every obstacle, winning one series after another.

It was a Dream Season for Autrey, who calls his kids the Wolfpack, and players such as Devan Lindsey, Micah Burke, Ty Nolen and Landon Pritchett and Blake Hoffman, seniors who led the way, and for Lane Fuentes and Kolby Kincade, underclassmen who were leaders.

Then there was the emergence of so many young stars such as freshman Miguel Luevana, one of the top infielders in Texas, and Autrey’s son, Hunter Autrey, a sophomore who had a monster year at the plate, and Cade Johnson and Caydon Rash, who all stepped up during the long stretch run to Round Rock and Dell Diamond.

The community fell in love with this team and met at Beaton and Forrest Lane to give the kids loud and warm send-offs before each round of playoffs.

And a large crowd from Corsicana made the trip to Round Rock for the semifinal game, a classic showdown in which the Tigers battled Colleyville Heritage, the No. 6 team in the nation. Heritage was led by the sons of former Rangers Bobby Witt and Rusty Greer, and Bobby Witt Jr. was the No. 1 player in the nation and the top pick in the big league draft. He signed a $7 million deal with Kansas City.

The Tigers never blinked and did not allow an earned run in a tough 2-1 loss to Heritage, which went on to win the state title the next day by the mercy rule.

When Andy Cavins took over as the volleyball coach at Navarro he brought a tremendous resume and high expectations with him.

But it’s still hard to believe what his Bulldog s did — they were perfect, ripping off a 31-0 season that ended with the NJCAA national title in Kansas, where Cavins was named the Coach of the national tournament and Jordan Lockwood was the MVP.

Deja Arnold and Emily Witt were also big stars and two of the top players in the nation and a big part of the perfect season that produced Navarro’s first women’s national title in any sport.

Navarro baseball coach Matt “Pudge” Podjenski has had one of the best records in NJCAA baseball in recent years, but bad luck, bad weather and bad timing haunted Navarro and his Bulldogs would just fall short of the JUCO World Series every year.

Navarro put together a classic run to Grand Junction, Colo., where the Dawgs not only reached the JUCO World Series but came out swinging and going deep — and came within a game of winning it all.

Jose Gonzalez, who hit a dozen homers during the season, belted five in the JUCO World Series, and Stacey Bailey, who hit 11 in the season, hit two bombs, including a mammoth shot that landed on a nearby golf course, an estimated 460 feet away.

The Bulldogs (41-18) hit everything and everybody in their run toward the title. They hit .385 and scored 54 runs in their first four games in the Series, and finished the season with 47 homers and a team batting average of .297.

It was Navarro’s first trip back to Grand Junction since 2013 in a bombs away season that had a life of its own.

OK, they weren’t exactly scoreless but Navarro’s nationally-ranked women’s soccer team lost a ton scoring power to graduation, and in August coach Alicia Wilson didn’t know where she would get goals this season.

But she believed her team would win again.

Without a prolific scorer in a program that always produces All-American scorers, Navarro found a way.

Wilson moved players around, built confidence with a defense that produced 11 shutouts with Grace Staunton in goal, and with Laura Janza, a talented goalkeeper, moving to the midfield where she became a leader and force and scored eight goals.

Defense became more important than ever and players such as Manami Okadi and Manyima Stevelmans emerged to lead a strong defensive wall, and Tateyanna Pitter did a little of everything to help the team find a new identity on its way back to the nationals.

Navarro finished the regular season on a seven-game winning streak, and outscored opponents 33-1 during that streak.

They were the only team in the nation to defeat eventual national champion Tyler, and it was no surprise when Navarro earned its second consecutive berth in the NJCAA national tournament.

“They have won because they are playing together,” Wilson said of here team. “They feed off each other and the chemistry has improved all year. They’re unselfish and they play together, and that’s why we’re winning.”

Nicole Olaya led Navarro with 10 goals and Roneisha Franks scored nine goals in the regular season and then had a hat trick in the NJCAA tournament. It was different season, but Wilson and a team that included 18 freshman, went to the nationals again.

To go along with the top five sports stories is one of the saddest stories of this or any year because Navarro and countless people in the community lost a friend and a coach who was one of the most giving men to ever walk on a baseball diamond or walk the streets of Corsicana.

He was passionate about baseball, cherished his players and loved Navarro County, and he touched everyone who ever met him

The loss of Derwood “Pops” Penney, who died at the age of 78, will linger long and hard with everyone who ever spent time with him. He was kind and caring and left his mark on hundreds of baseball players at Navarro, where Pops was a voluntary coach for years.

His funeral at Northside Baptist Church was a standing-room-only celebration of his life that included dozens of former players who came back to Corsicana for a tearful farewell.

Boston second baseman Brock Holt, who was one of the pall bearers, returned to the Red Sox afterward and in his first game back Holt hit a home run for Pops and looked at the heavens when he reached home plate with tears in his eyes to honor a man who meant so much to him.

Every player who went through Navarro felt the same way about Pops, who always gave so much more, and was always there — on and off the diamond — for everyone.

He played for the 1958 Tigers who made it to the state title game and spent a lifetime selling farm equipment — and then wrote another chapter at Navarro, where he found a way to help every Bulldog become a better baseball player and a better man.

Pops simply touched people and cared about everyone he met, and he leaves the kind of priceless legacy few will ever imagine.