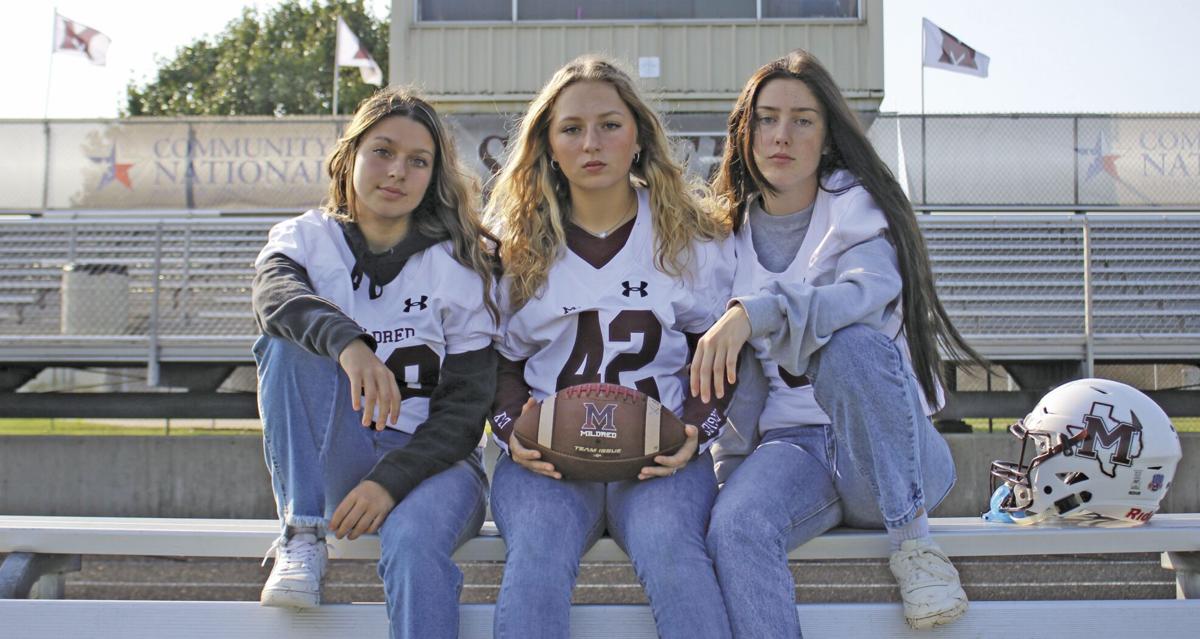 Daily Sun photos/Michael Kormos Pictured from left to right are: Kadence Cline, Arianna Neason, and Kennedy Gosdin, three young ladies who are tough and seasoned multi-sport athletes who kicked down some traditional barriers and joined the Mildred varsity football team. 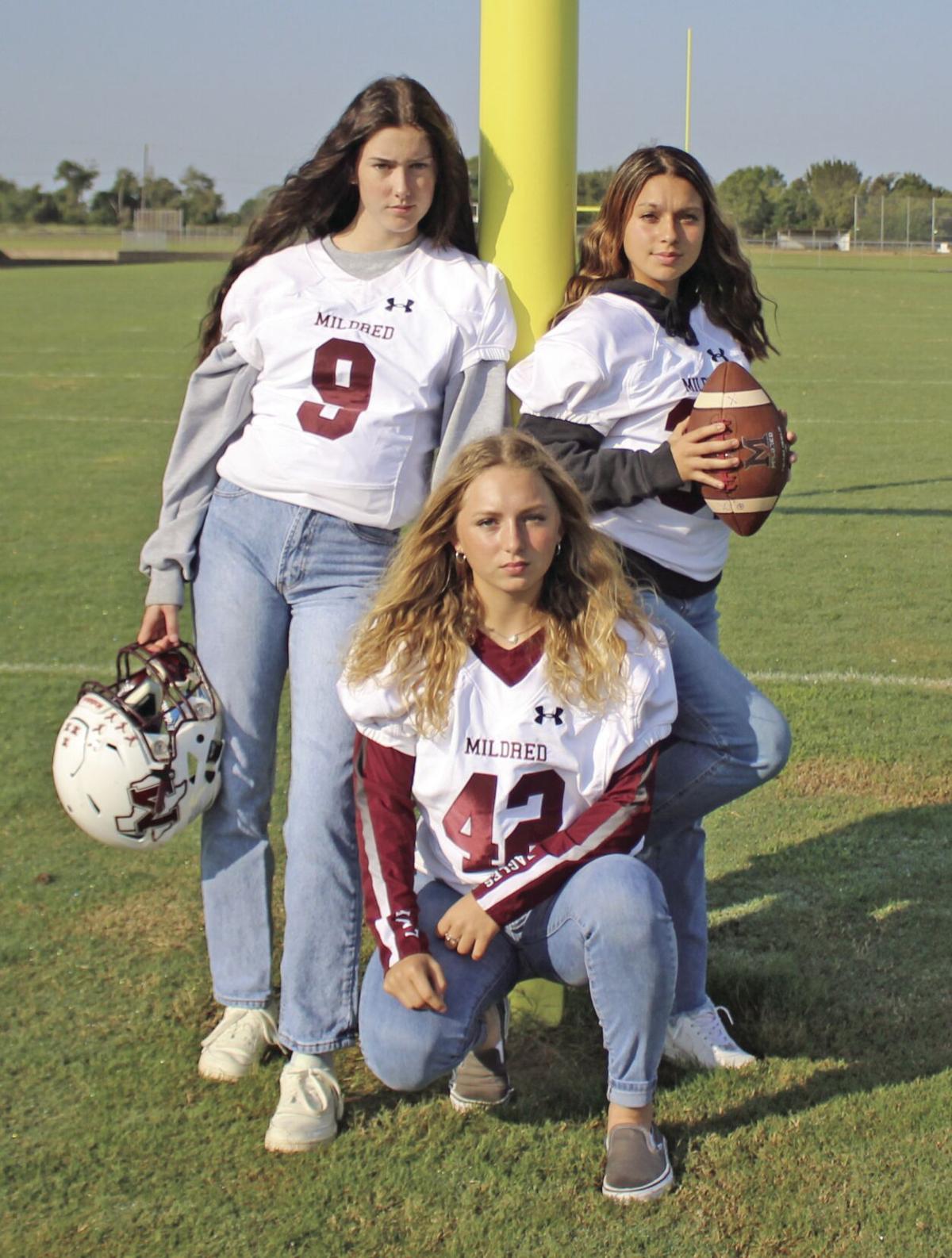 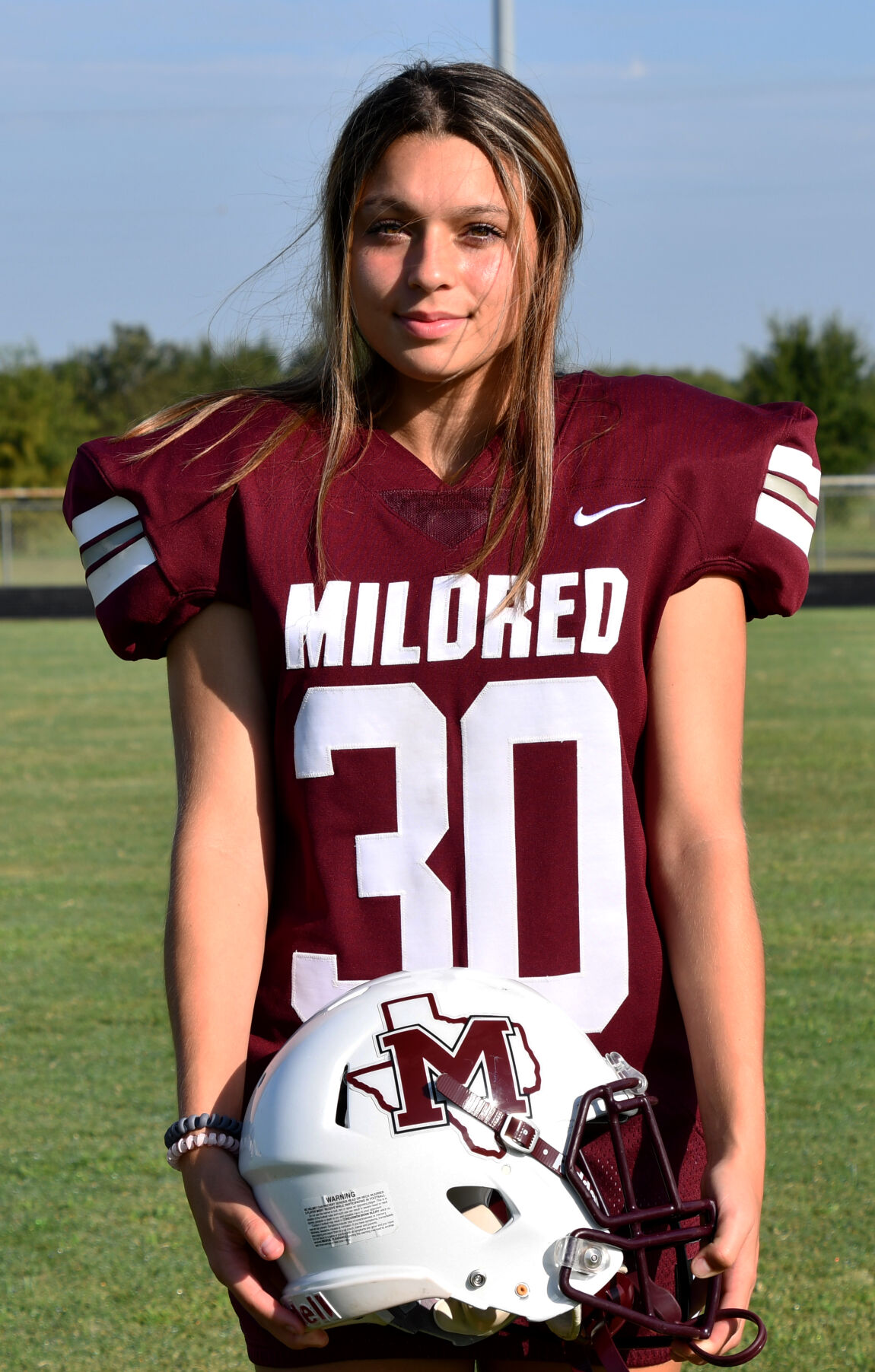 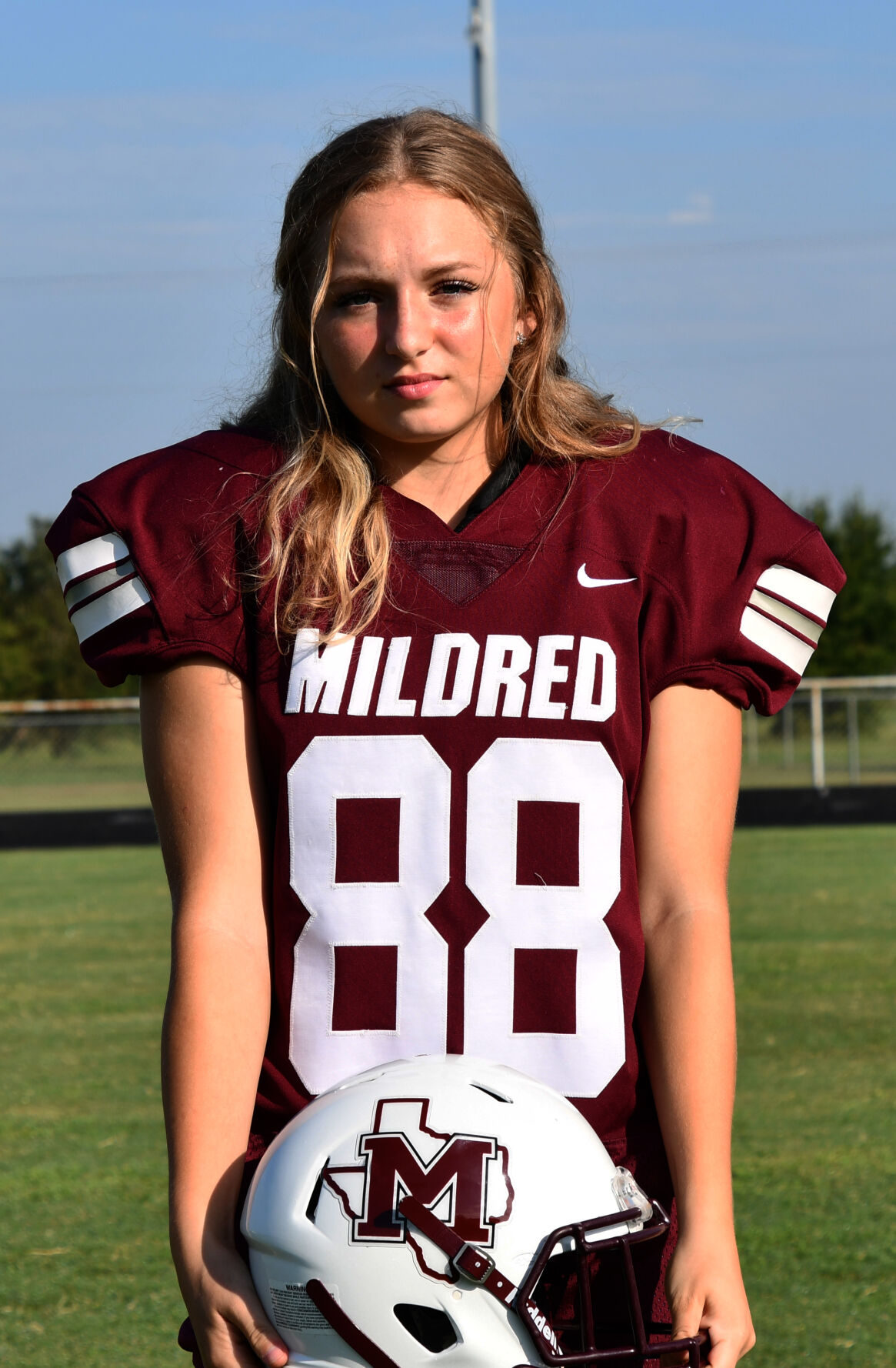 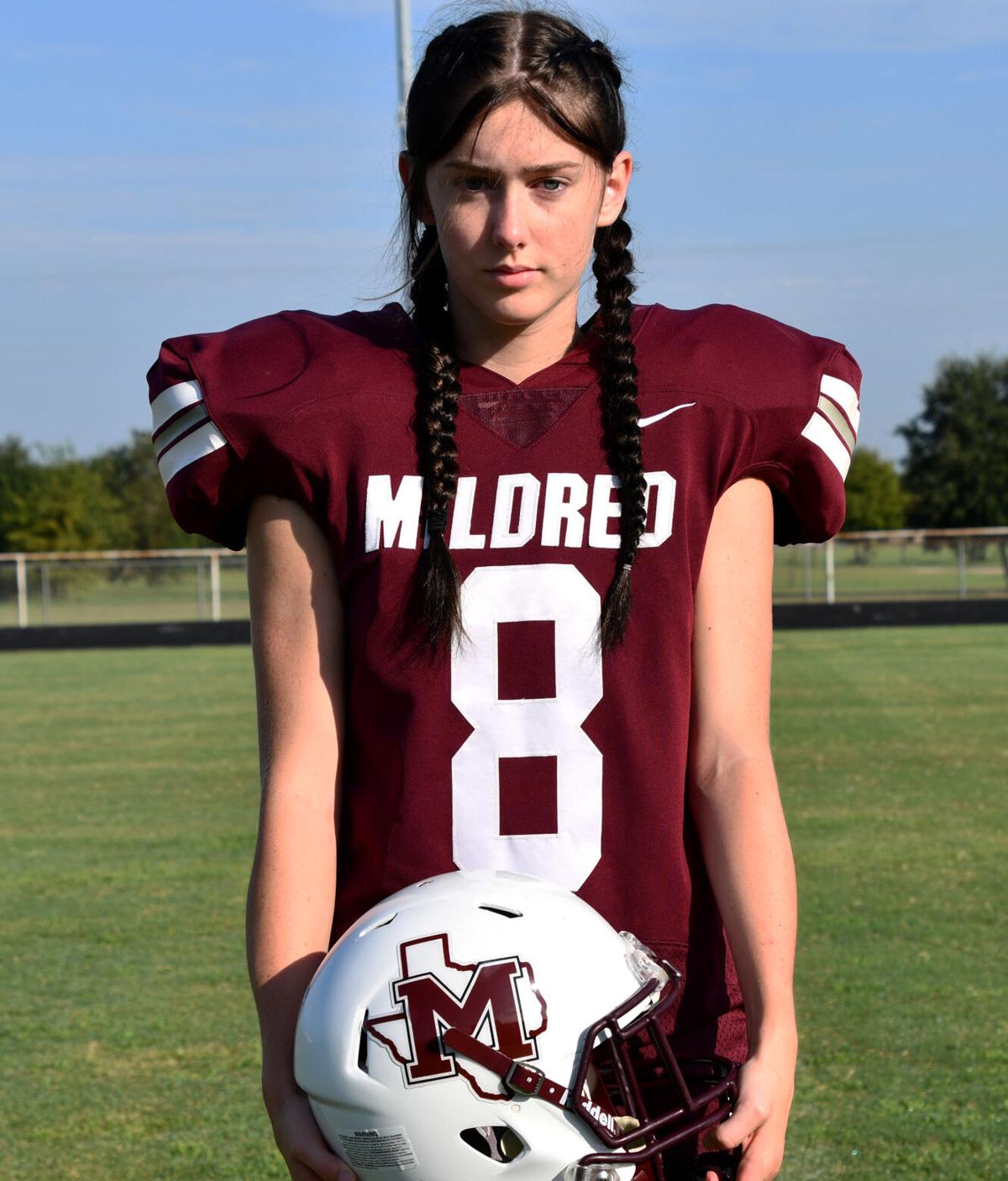 Daily Sun photos/Michael Kormos Pictured from left to right are: Kadence Cline, Arianna Neason, and Kennedy Gosdin, three young ladies who are tough and seasoned multi-sport athletes who kicked down some traditional barriers and joined the Mildred varsity football team.

MILDRED — The kicking game for the Mildred Eagles has been an adventure this season. The Eagles did not kick an extra point in their first three games and even kickoffs were a gamble.

Against Kerens last week in the young ladies’ first game, the Eagles did not try an extra point as the they scored their lone touchdown with 15 seconds with the game on the line.

Coach Duke Dalton decided to go for the victory with a two-point conversion, however, all three ladies were ready.

Cline kicked off both times for Mildred, kicking the ball exactly where the coach wanted. But kicking an extra point with 15 seconds left in a 7-6 game that would have determined a win or a lost would have put a tremendous amount of pressure on an experienced kicker -- not to mention the added pressure for a young lady attempting her first PAT.

“I really didn’t want to put that pressure on Kadence, doing an extra point for the first time with the game on the line," Dalton said. "I just couldn’t do that to her. I am sure she would have done great, but we wanted to save her that and go for the win. She did great on kickoff! She did exactly what we wanted her to do.”

One of the teachers helping the girls warm up during halftime said, “It was really impressive you could tell them where to kick and they could kick it exactly where you wanted it.”

“It was really easy, we are used to that playing soccer," Neason said.

It all started as a joke.

Neason's father, Patrick, said he could see how Mildred was struggling in the kicking game and he joked with Dalton that he should get Arianna to kick for them. The joke planted a seed that took hold, and within a couple of days Dalton had the girls trying out for the team.

Cline admitted that she had joked about playing last year as a sophomore, but when she heard another girl was trying out, she had to go for it.

That gave Mildred two options at kicker. Then Gosdin made it a trifecta.

“Arianna told me that she was trying out for the team, then coach Dalton asked me if I was going to try out during workouts so I went for it," Gosdin said.

Each of those girls faced their own difficulties and hurdles to play in the male-dominated sport.

“We really had to fight, mainly against the coaches," said Christy Sneed, who played linebacker as a freshman for Mildred 19 years ago. "My mom had to fight and fight for them to give me a chance. They made us sign a bunch of waivers, but after I was able to prove myself in practice, the coaches were all on board and the season went great.”

“I guess (the biggest hurdle) was my parents and other coaches worrying about us getting hurt, but everyone has been really supportive," Neason said.

The Mildred coaches and players have stepped up and not only supported the girls, but they have encouraged them.

"The coaches and players have been really supportive and protective," Cline said. "Some of the players came up to us during the game and told us that no one (the Kerens players) would touch us.”

All three felt more than welcomed to the team.

“The players and coaches have been great, very supportive," Gosdin said.

It was clear that the Mildred crowd supported the young ladies at the Kerens game, cheering loudly on every kick during warmups, and drowning out the Kerens crowd when Cline kicked off in the game.

The Mildred crowd made a difference.

“It was really neat," Cline said. "Everyone was lined up on the fence watching me kick, cheering me on.”

Neason and Gosdin came straight from the volleyball court in Mildred, where the Lady Eagles had just defeated Rice, to the football field in Kerens.

“It was really funny. Some of the dads had to help me get my shoulder pads on since the players and coaches were all in the fieldhouse getting ready for the game," Neason said. "It was awesome with all the people cheering me on warming up, even if I messed up.”

The Mildred fans couldn't wait to let the girls know how they felt about them being on the team.

“It was really cool all the people cheering us on even for warmups," Gosdin said. "There was a group of guys that were watching us cheering us on, impressed when we kicked it really far.”

Then came the real deal.

There was Cline lining up for the kickoff.

“I was really nervous the first time," Cline said. "I didn’t look at any of the other (Kerens) players and kinda forgot my right from my left. But it was super easy and on the second kickoff, I made sure I looked all the Kerens players on the front line in the eyes and kinda glared at them.”

All three young ladies have soccer and athletic backgrounds. Neason and Gosdin both play volleyball and all three girls play for competitive club soccer teams.

Cline has played on the club team Storm FC out of Waxahachie under coach Antony Penna since she was 10. Neason plays for another team with Storm FC. Gosdin played for Dallas FC until February when her family moved to Mildred.

They have all known success in athletics.

All three young ladies say they enjoy playing football, and Gosdin said she likes it better than volleyball, just being outside and kicking the ball again.

“You are going to face criticisms. It may be from your parents, coaches, teammates, opposing players, or even people in the community, but don’t let them get you down," she said. " There are no boundaries anymore. You can do anything you set your mind to if you are willing to put in the work.

Now Cline, Gosdin and Neason are the new pioneers and they will pass the message to younger girls.

What will they tell the next generation?

The girls will share kicking responsibilities as much possible as they go forward with the team this season.

The Eagles had high hopes going into the season and have a winning record so far despite injuries and struggling on offense and special teams. Shoring up the kicking game gives Dalton's team another weapon and goes a long way to helping the Eagles reach their goals.

It's a different world today than even when Sneed played for Mildred. Every year we see more and more cracks in the glass ceiling that is football in America.

At one time female players in high school and in college were a rarity and were unheard of in the NFL but now they are more common in high school and college and even in the NFL with coaches such as Katie Sowers, who is an assistant coach for the 49ers. Each lady blazing a trail for those to come after.

The Mildred girls are enjoying their time on the gridiron, and they know they  are role models to the girls coming up showing them that they really can play football, they really can achieve their goals if they put in the work.

“If you genuinely want to do something, do it, make it happen. Don’t be scared or let others tell you that you can’t.”