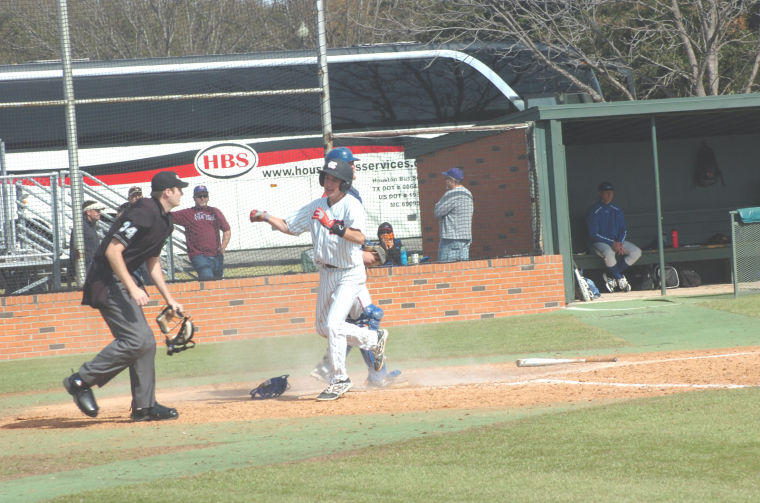 Mason Hesse celebrates after scoring the winning run in the bottom of the 10th in Navarro’s 2-1 win over Angelina on Friday. The Bulldogs went 3-1 from Friday through Monday, and had two walk-off wins. Daily Sun photo/Ron Farmer 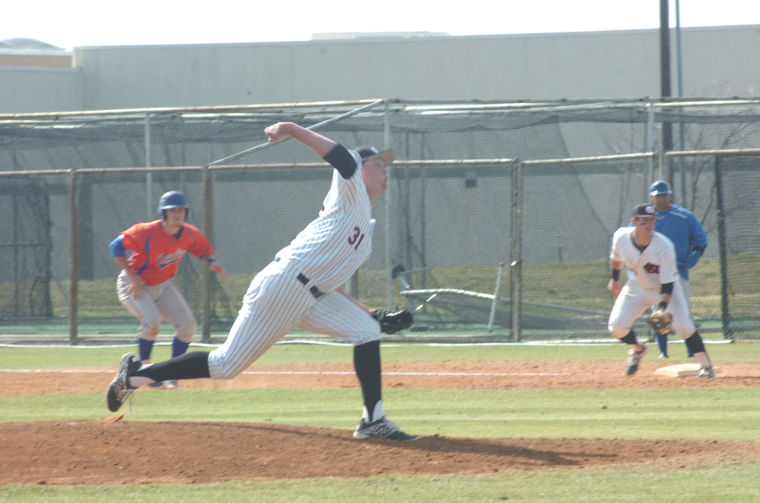 Navarro’s Remey Reed fires a pitch to the plate against Angelina on Friday. Reed pitched well Friday and even better on Monday, throwing two scoreless innings to get a win in Navarro’s 7-6 victory Indian Hills. Daily Sun photo/Ron Farmer

Mason Hesse celebrates after scoring the winning run in the bottom of the 10th in Navarro’s 2-1 win over Angelina on Friday. The Bulldogs went 3-1 from Friday through Monday, and had two walk-off wins. Daily Sun photo/Ron Farmer

Navarro’s Remey Reed fires a pitch to the plate against Angelina on Friday. Reed pitched well Friday and even better on Monday, throwing two scoreless innings to get a win in Navarro’s 7-6 victory Indian Hills. Daily Sun photo/Ron Farmer

Whoa Dill swears he doesn’t have a walk-off signal for his players.

There’s no secret signs coming from third base, no touching the cap and elbow and then walking up and down to give the magic sign for the walk-off.

At least that’s what Dill says.

First there was Grayson Lewis’ 10th-inning game-winner in Game 1 of a doubleheader against Angelina on Friday when Lewis brought home Mason Hesse, whose run beat Angelina 2-1 and sparked a wild celebration on the field.

Then Hesse sparked the Bulldogs in Game 2 Friday with a three-run triple that opened the gate for a 17-2 win to sweep the doubleheader and give Navarro a 4-2 start in Region XIV. That’s the best record in the league after two weekends, and that’s what Dill wants.

“The main thing is to win two-out-of-three when we have a series in the region,’’ Dill said after the 17-2 pounding.

Corsicana grad Holden Grounds (5-1) got the win, giving up just one run over five innings.

The sweep was about as rare as snow in Texas in April because the first game was such a nailbiter and the second game was a party at the plate.

“You can’t explain it,’’ Dill said of the two different games. “That’s baseball. But I have always said that hitting is contagious. We really hit the ball well in the second game.’’

The Bulldogs kept hitting in a doubleheader on Monday when they faced the Indian Hills (Iowa) Falcons, who were just happy to see green grass after a long, snow-filled winter. Navarro was the first stop on a spring break trip in Texas.

Navarro took a 6-0 lead with a six-run second inning on five hits and a walk. Sam McDonnell led off with a single and a stolen base to get things going and Jovan Hernandez followed with an RBI single. Hunter Seales had a two-run double and Lewis came though with a double. Hesse and J.P. Phillips also drove in runs.

Indian Hills came back and knotted the score at 6-6 with a two-run third and a four-run fourth as Navarro’s pitchers searched for the strike zone.

Finally, Remey Reed entered with two on and no outs in the sixth and shut the door. Reed  struck out the first two batters he faced and ended the inning with a grounder to second. He finished off the seventh and picked up the victory when Navarro scored in the bottom of the seventh.

Once again, it was a walk-off.

This one came with two outs. In fact, the rally started with two outs when McDonnell walked and stole second. Hernandez hung in there and fouled off some 2-2 pitches to stay alive before ripping a liner into the left field corner to bring in Phillips.

“I know everybody likes walk-offs,’’ Dill said. “But I don’t like them. They are always fun for everybody, but they give me gray hairs. As a coach, they’re nerve-wracking.’’

The second game of the doubleheader was a wild wide-open game that Indian Hills won, 11-8. Dill played mostly backups and Navarro used five pitchers, including Jorge Flores, who started and took the loss, and J.D. Hammer, who faced two batters in the seventh and got both of them with strikeout and a fly to center.

But by the time Hammer came in — Dill just wanted to give his starter a little work — Indian Hills had scored twice in the seventh to take an 11-8 lead.

It was that kind of game. Indian Hills built a 7-3 lead and hung on. Navarro scored twice in the bottom of the fourth to close to 7-5 on McDonnell’s two-run single but Indian Hills scored twice in the top of the fifth to go up 9-5. Navarro bounced right back and scored three in the bottom of the fifth on three hits, two walks, a hit batsman and a bases-loaded wild pitch to close to 9-8, but left the bases loaded and didn’t mount another threat.

Dill wanted to give Flores some work. The left-hander has struggled since tossing a no-hitter a couple of weeks ago. He gave up five runs (three earned) on five hits, a hit batsman and a balk over 2 1/3 innings.

Now is the time to get in the work, letting pitchers work on things between the region games that count.

“These aren’t conference games, so it gives you a chance to see a lot of players,’’ Dill said of Monday’s doubleheader. “In the second game we just couldn’t get a shutdown inning. But our main thought is Friday against Bossier (in a region three game series this weekend).

“But we had a good 3-1 weekend, and we had another walk-off today,’’ Dill said. “They’re fun, but I would rather be sitting in the dugout with a big lead.’’