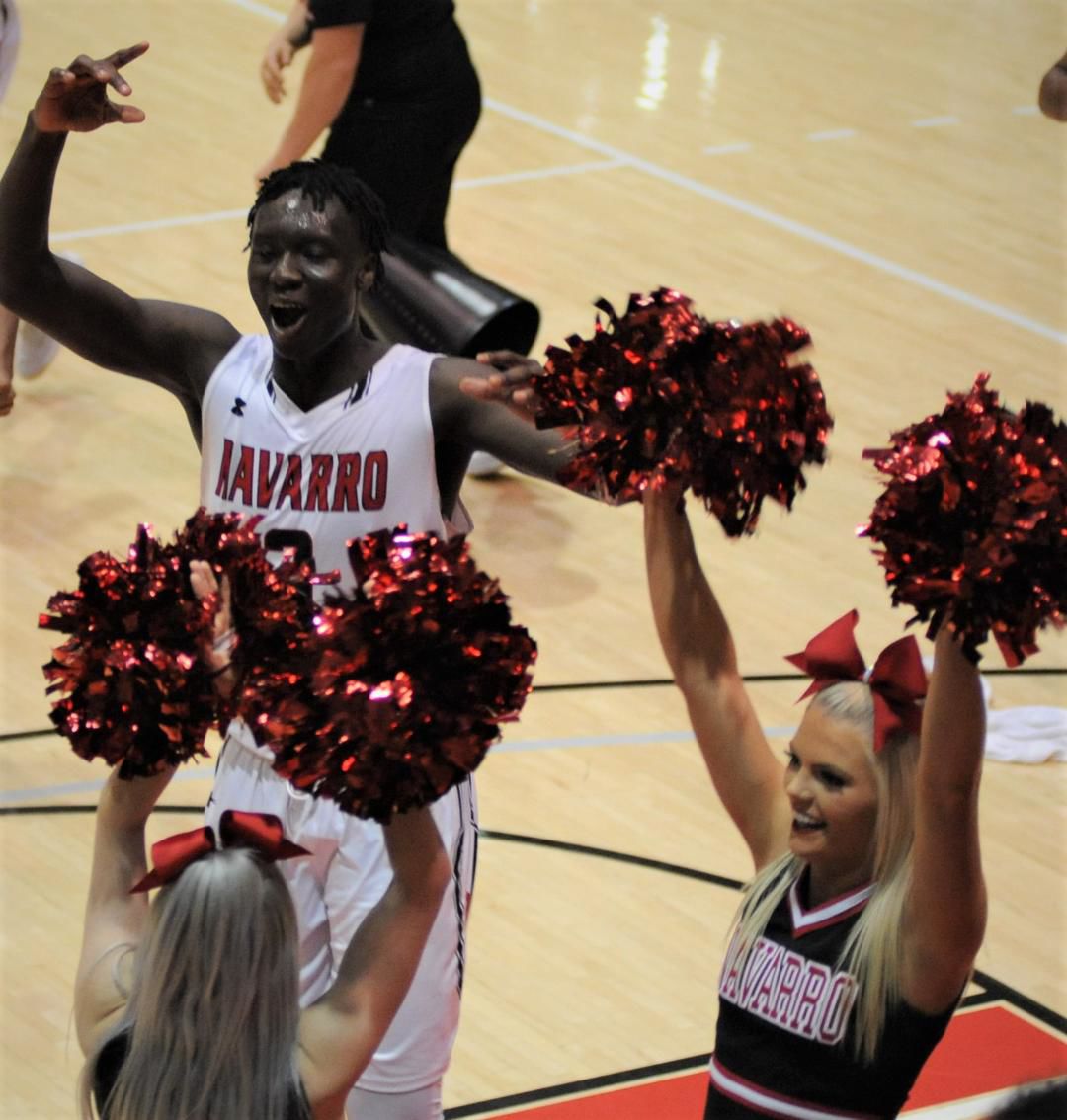 Navarro’s Akol Mawein, who led the Bulldogs with 28 points against Kilgore Wednesday, celebrates by running down court amid Navarro cheerleaders who ran onto the court to join the players’ celebration when Kilgore missed a desperation shot at the buzzer that sealed Navarro’s dramatic win. 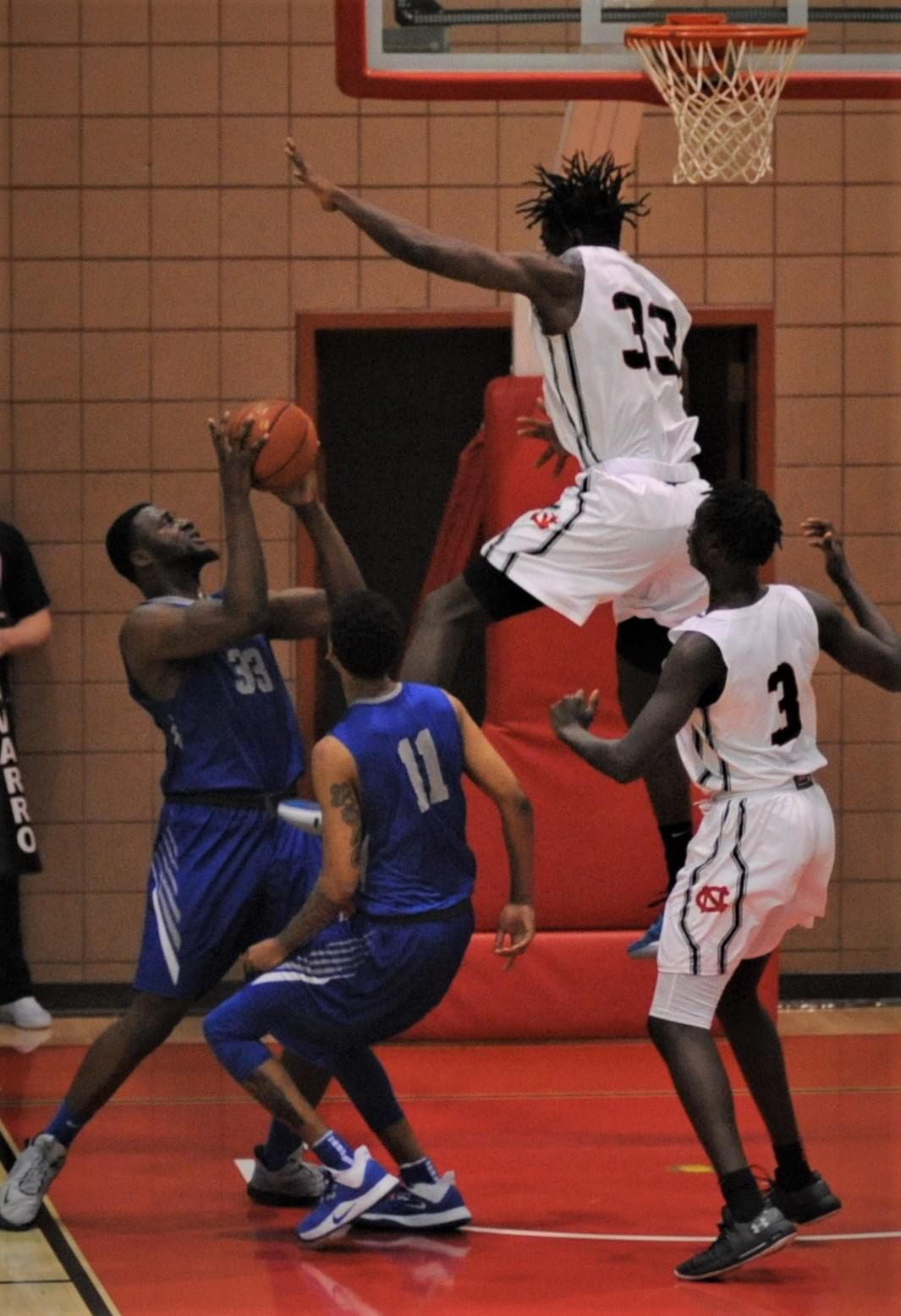 Navarro’s Soulyemane Doumbia skies high in the air on defense against Kilgore as Akol Mawein (3) follows the play.

Navarro’s Akol Mawein, who led the Bulldogs with 28 points against Kilgore Wednesday, celebrates by running down court amid Navarro cheerleaders who ran onto the court to join the players’ celebration when Kilgore missed a desperation shot at the buzzer that sealed Navarro’s dramatic win.

Navarro’s Soulyemane Doumbia skies high in the air on defense against Kilgore as Akol Mawein (3) follows the play.

Navarro needed this one — needed it in the worst way.

The Bulldogs, who have shown spurts of brilliance this season, had stopped and sputtered of late, and came into Wednesday’s game against Kilgore with a two-game losing streak.

Well, it was worse than that.

They were coming off an 82-73 loss to Paris on the road to the Dragons, who are the last-place team in the Region XIV East Zone race.

That loss dropped the Bulldogs to 6-4 in the conference and into sixth-place, just ahead of Paris in the East Zone race.

Kilgore entered the game with a 17-4 record and an 8-3 mark in the East Zone and battling Tyler for the top spot.

On paper the Dawgs were dead. No chance. You don’t lose to Paris and then knock off Kilgore.

But of course that’s exactly what happened Wednesday night on the Lewis Orr Court at the Wolens SEC, where the Bulldogs played what was arguably their best (and most important) game of the season to date to beat Kilgore 73-71.

It was a thrilling up-and-down showcase game for Grant McMillan’s team.

Navarro had to weather strong play by Kilgore and then hang on at the end as the Dawgs forced Kilgore to take an awkward shot at the buzzer with a defense that simply denied everything in the final seconds.

Players jumped in joy and ran like crazy around the court at the buzzer.

It felt just that good.

The crowd went bananas and if it looked and felt like Navarro had just won something special it’s because the Bulldogs had.

That’s how important this turn-around game was, and with all the pressure on the Dawgs, they stepped up to the moment and seized the moment and the game they had to have.

Akol Mawein had his best game of the season, taking center stage in the victory. He made 11-of-18 shots from the floor, including a pair of 3-pointers to lead the Dawgs with 28 points on a night when every point seemed like so much more.

Mawein, who found his way to Corsicana from Australia and recently signed with San Diego State, did a little of everything to keep the Dawgs in the tight and tense game.

He pulled down eight rebounds and handed out three assists and hit one big shot after another.

The Bulldogs, who have struggled lately, shot 50.9 percent from the floor (28-of-55) against a tall and athletic Kilgore team.

Soulyemane Doumbia scored seven points, pulled down six boards and blocks three shots, and Tyrese Patterson scored six points and made four steals on a night when defense meant everything.

The win puts the Bulldogs (13-9 for the season and 7-4 in the conference race) right back in the mix in the East Zone race, but they can’t relax. They travel to Athens on Saturday for a showdown against rival Trinity Valley, whichs wept Navarro last season. The Cardinals are coming off a tough 110-106 double overtime loss to first place Tyler (10-1). TVCC is now 7-4 and tied with Navarro and just ahead of Bosier Parish (7-5), which lost to Panola (8-3) 93-85 Wednesday.

It’s a crowded race in the East Zone, thanks to Navarro’s win over Kilgore, which fell to 8-4 — just one game ahead of the Bulldogs.

There’s plenty of season left. The Bulldogs have eight East Zone games before the Region XIV Tournament begins on March 3, but they needed to stop the slide and turn things around wednesday.

They sure did, winning a game they really needed to have.