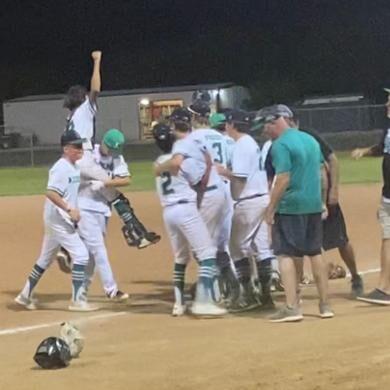 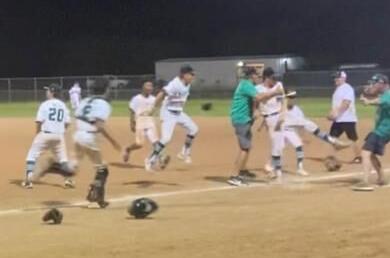 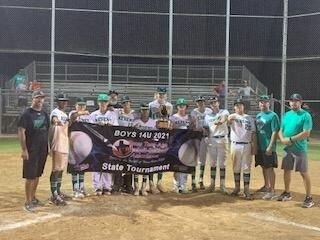 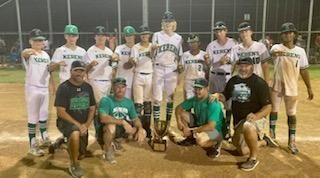 The Kerens 14u baseball team, which has been playing together for almost a decade, is all smiles after winning the TTAB state title. 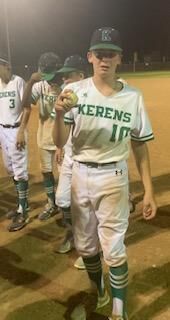 Lane Lynch, who went the distance in Kerens 7-5 win over Van in the TTAB 14u state title game, celebrates Friday night. 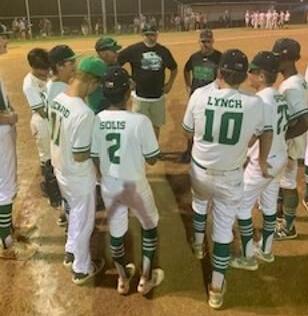 The Kerens 14u baseball team huddles on the field together after winning the TTAB state title. 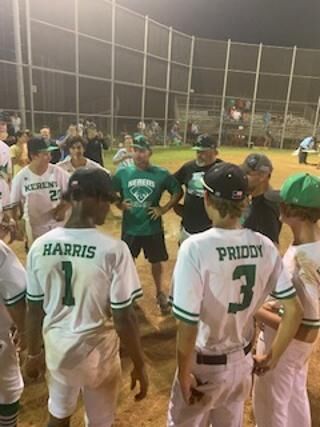 The Kerens 14u baseball team, which has been playing together for almost a decade, is all smiles after winning the TTAB state title.

Lane Lynch, who went the distance in Kerens 7-5 win over Van in the TTAB 14u state title game, celebrates Friday night.

The Kerens 14u baseball team huddles on the field together after winning the TTAB state title.

There they were jumping for joy, leaping toward the heavens, hugging and shouting and hugging some more, turning the Wallace Park baseball diamond into their own private party,  -- invitation only.

Their journey of nearly a decade ended in joy and jubilation, and no one wanted the party to end.

The Kerens 14u baseball team had just won the TTAB state title and completed an unforgettable ride that started when some of the players were 4-years-old, a ride for the ages.

"These kids will be talking about this game forever," said coach Matt Lynch, who watched the Kerens kids beat Van 7-5 in the title game late Friday night in Hillsboro, where Lynch's son, Lane, struck out the final batter with runners at second and third to hang on to the victory and a dream they will keep forever.

Ryan Priddy, Adrian Solis and Lane Lynch were on the T-ball team that started the ride almost 10 years ago, and most of the kids have been playing together for years.

Matt Lynch and Greg Priddy were the original coaches, and when Kerens nailed down the final out Friday, the two men hugged on the field while the kids danced like crazy, embracing each other and the moment. No one wanted to let go.

"It was very emotional," coach Lynch said. "Because we've coached these kids since they were 5 years old.''

Kerens reached the state tournament seven of the last nine years and came oh so close in the second year they were together, finishing second in a tough T-ball state title loss to Van (yup, Van -- you can't make this stuff up).

They took third once and finished fourth twice, and everyone knew this was their last chance to play together -- their final chance to win it all.

They won a state title and so much more, sealing a bond that will last a lifetime, winning in front of a big Kerens crowd of moms and dads, brothers and sisters, grandparents -- Papas and Memas -- and friends and family who all shared the moment.

The Kerens kids went undefeated to win the district title and then swept their way in Hillsboro to reach the title game Friday night. They beat Ballinger 8-1 in their opening game and won a close game 4-2 against Van in the second round before running away from Buffalo 16-3 in the semifinals.

They entered Friday's 6 p.m. title game knowing Van would have to win twice to take the title, and Van hung on to win the game 9-8, forcing a winner-take-all showdown.

Van scored four runs in the first inning, but the Kerens kids never blinked or got down. They just hung together and chipped away with a comeback they will never forget, scoring six unanswered runs, including three in the top of the seventh.

The three coaches, Lynch, Priddy and Shane Hill, whose son Kooper plays for Kerens, had to scramble to put a team on the field because catcher Matt Rickart had a thumb injury and couldn't catch. They moved him to the outfield, setting off a domino effect as three players changed positions in the biggest game of their young lives.

"Matt has been our catcher all year, but we had to move some kids around," coach Lynch said. "To see those kids play multiple positions come through like they did. It was great to see them pull that off."

Kerens scored a run in the first when Gracen Harris walked and came home later on Adrian's RBI single. Gracen is the son of former Kerens High School football coach and AD Terrell Harris, who owns all of Kerens' rushing records from his playing days.

Gracen is just like Dad. He can fly. And Van knew it -- and walked Gracen three times (twice intentionally).

Kooper and Matt (Rickard) led off the second inning with solid singles, and Gracen was intentionally walked to load the bases. Ryan made Van pay when he ripped a two-out RBI single to make it a 4-2 game.

Kooper was hit by a pitch to lead off the fourth and Gracen walked with one out. Van almost escaped, but Lane ripped a two-out single to left to knot the score at 4-4, and it stayed that way until the top of the seventh.

Lane was masterful on the mound after the first inning, shutting down Van while the Kerens kids fought back at the plate. They broke up the 4-4 tie in their final at-bat of their nine-years together.

Adrian, an original player on the first T-ball team, led off the seventh by reaching first on a hit-by-pitch and then Jace Trull, a pickup player from Blooming Grove who has played for Kerens for years, hit a shot off the left field wall to bring Adrian home with a 5-4 lead. Jace's triple also ended the night for Van's starter, who reached the 95-pitch limit.

Andy Conklin, who came through all night as the Kerens catcher, came through at the plate with his biggest hit of the season -- a sharp single to right to bring home Jace and a 6-4 lead.

JJ Hightower followed and was safe at first on an error, which moved Andy to third, and Andy walked in when the new Van pitcher balked.

Lane took the mound in the bottom of the seventh with a three-run lead and only 12 pitches before hitting the limit. He got the first batter out with one pitch. Van strung together three hits to score a run to put the pressure on and put everyone on the edge of their seat, but Andy made a huge play, throwing out a runner who tried to steal, firing a strike to Gracen at second.

Van had runners at second and third and the No. 4 hitter (the best hitter in the lineup) at the plate with two outs. Lane had only four pitches left, but TTAB allows a pitcher to complete the at-bat, and sure enough, Lane struck out the final batter of the game, the season and Kerens' nine-year run to the title.

Lane went the distance, striking out seven and allowing three earned runs on seven hits. The Kerens kids banged out nine hits, including two by Andy and two by Ryan, who each drove in runs. Adrian, Lane, Jace and Kooper all had RBI hits, and Matt singled and scored. And who knows how many hits Gracen would have had if Van had just had to pitch to him.

"Everyone came through on the team," coach Lynch said of the group that was coached all year by Matt Lynch, Shane Hill and Gregg Priddy, and was made up of Lane Lynch, Ryan Priddy, Jace Trull, Gracen Harris, JJ Hightower, Kooper Hill, Adrian Solis, Mason Spicer, Andy Conklin and Matt Rickard.

"All of these kids worked hard for so long," coach Lynch said. "We're so proud of all of them. Our goal has always been to teach them to be good kids, and they are. We've had some of the same parents all these years, and that says a lot, and the parents have been great. We've always had a great support group, and that means so much.

"These are great kids and they won it together," he said. "It was a great feeling!"