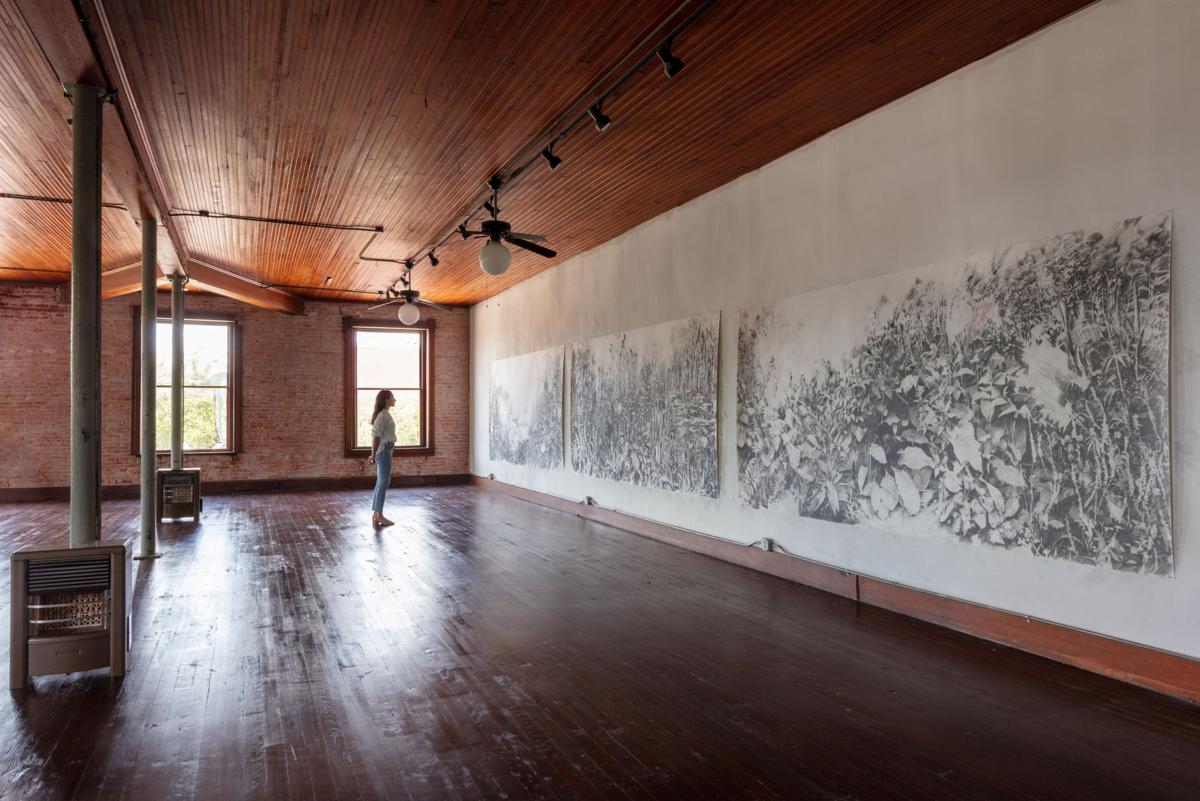 A visitor looks at the graphite sketchwork of Rachel Wolfson Smith. Photo Courtesy of Kevin Todora 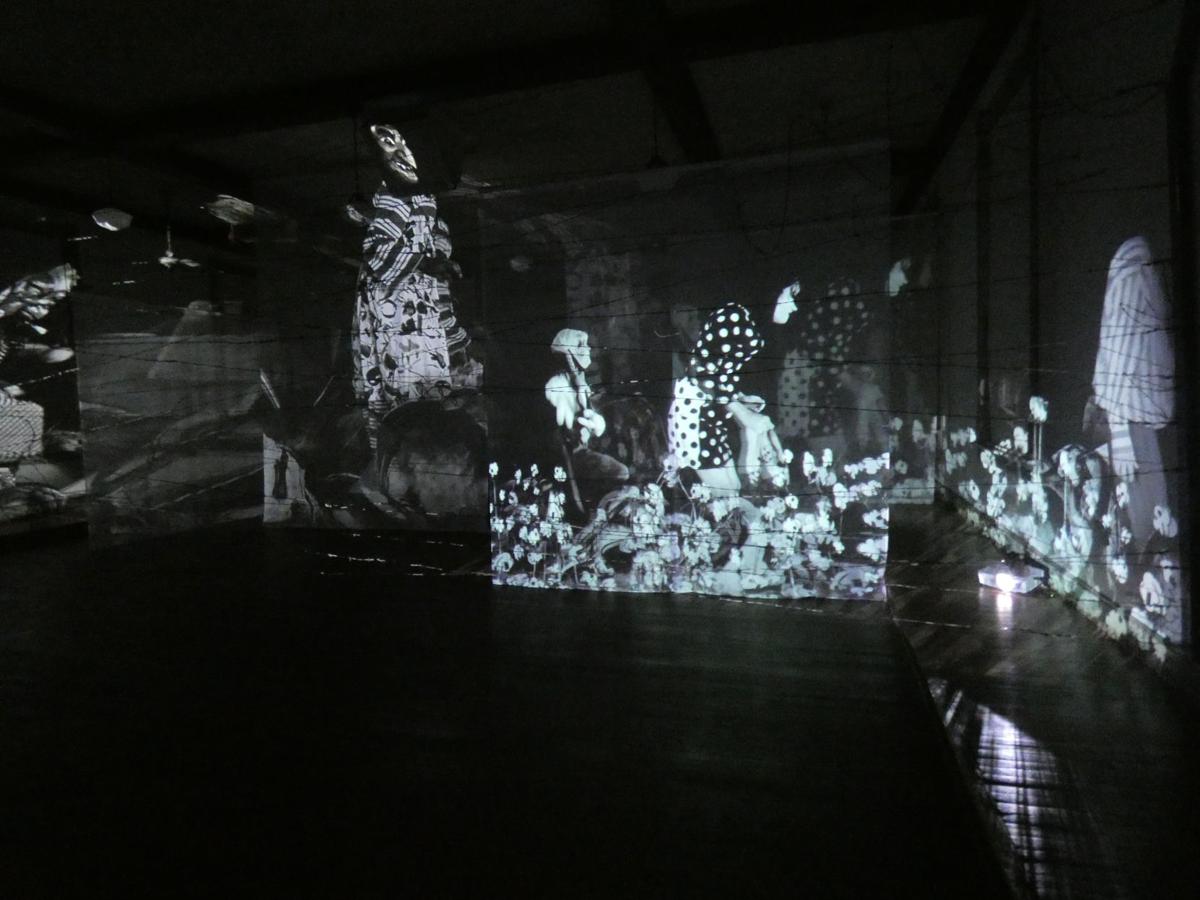 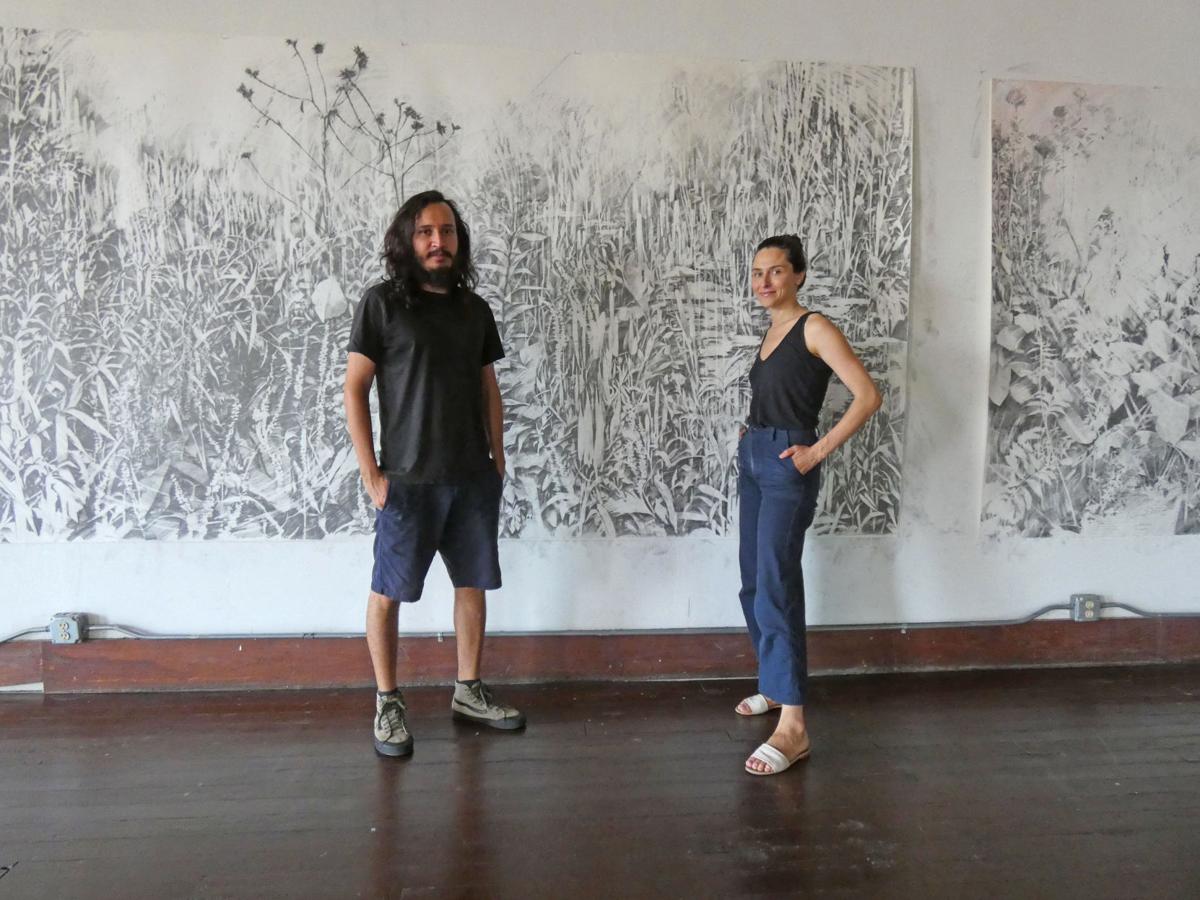 A visitor looks at the graphite sketchwork of Rachel Wolfson Smith. Photo Courtesy of Kevin Todora

To experience 100W for the first time feels like stepping into a full exhibit the moment you walk through the door.

That's the sort of immersion founder Kyle Hobratschk has created with the artist and writer residency in downtown Corsicana. The 11,000 square foot building has housed a collective of artists and writers from all over the world, and its two current resident artists, Rachel Wolfson Smith from Austin, and Edison Peñafiel from Miami, Florida, are having an open studio reception from 11 a.m. to 6 p.m. Saturday, Aug 3.

Both artists present their own unique exhibits, telling their own stories, but the influences they pulled from have created a shared narrative of their time in Corsicana.

Studio guests will find the second floor of the studio occupied by Smith's work. A collection of graphite drawing triptychs that she has referred to as “Voids.” The three pieces are sizable, measuring six feet tall by 36 feet wide, and highlight the foliage-laden personal garden of the renowned Dutch landscape architect, Piet Oudolf.

“The idea of time fell away,” Smith said, referencing her moments of sketching the triptychs against the large wall that displays the three pieces. “It's been so unique to be able to work on these all in a row.”

Smith found her time in Corsicana was affecting, its slower pace allowing her to do deep focus work.

“There's a pride that people have with spaces here,” Smith said. “It's been a really special experience,” she added, noting that downtown Corsicana was the right space and place to create her work.

Peñafiel agreed as he showed off his installation, “Land Escape.” Taking up the third floor of 100W, his work takes up an entire room filled with video projections and sound references. Focused on perpetual movement, Peñafiel wanted to talk about real issues in a surreal manner as characters make an endless migration through animated, hand-drawn landscapes.

The designs of his human subjects are whimsical, yet sympathetic as they walk about the room. The peculiar masks come from Ecuador. The costumes, however, are far more local, having come from the generous archives of the Warehouse Living Arts Center.

Peñafiel noted that his subject matter was not pre-planned.

“I came to the residency and tried to react to the space with themes that I want to talk about,” he said.

Initially, Smith and Peñafiel planned on a two-month residency with 100W, but their work and growing love of Corsicana's community and architecture enticed them to stay for four months. Smith has found that she enjoyed taking walks downtown.

“There's a cadence and a rhythm to the area,” Smith said.

During her time in Corsicana, she has found that the slower-paced nature of town allowed new methods of artistic expression by letting go of some things while allowing new things. Spending time with the other resident artists and the 100W building gave space and time that allowed new processes to unfold.

Peñafiel found appreciation in the history of the 100W and the unique rituals and secretive gatherings of the building. The landscape of this part of Texas found representation in his own work.

After Saturday's reception concludes, both Smith and Peñafiel will be leaving the residency. Peñafiel is shipping “Land Escape” off to Miami, where the piece will be displayed at the Museum of Contemporary Art's South Florida Cultural Consortium. Smith says that she will definitely return to Corsicana again.

Smith hopes what guests will pick up on the the essence of the story that took place between herself, Peñafiel and the 100W building itself, and explore it as an immersive world that was created and combined the three experiences into one.

The reception on Saturday will be an opportunity to learn more about all three subjects.

Ida Maude Davis, 98, of Hubbard, Texas passed away peacefully on Jan. 16, 2020 at Heritage Oak West Nursing Home in Corsicana, Texas. A Celebration of Life Service will be held at 11 a.m. on Monday, Jan. 20, 2020 at St. Paul AME Church in Hubbard. Interment will be in Valley View Cemetery. A…